I searched and tried the Gore Windbreaker Jacket today on. It fits me very well and I like the look of the jacket in black.

The white one looks good too, but I am afraid that it is harder to clean if it gets dirty. Is it a bad idea to cycle in full black clothes because of visibility? 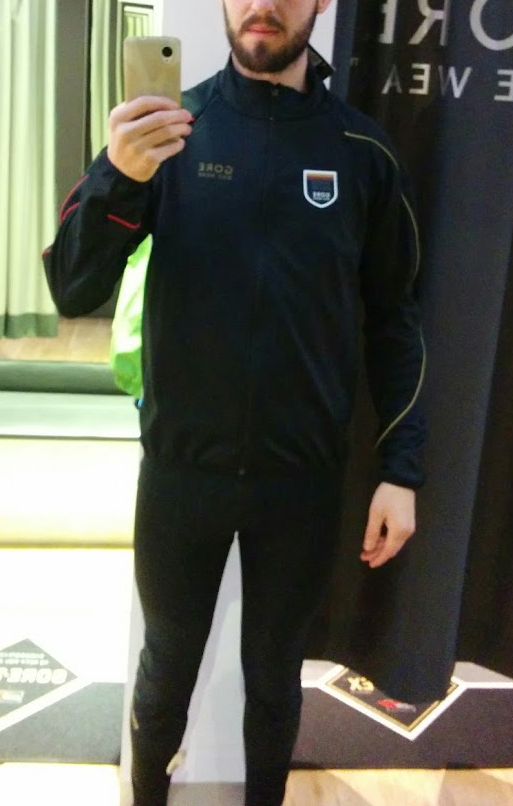 I think there is a case to be made that you will be less visible in dark colours. Anecdotally whenever I look down the road at a group of cyclists, it's the ones in large blocks of bold colours (not necessarily fluorescent) whom I can spot first. Bright but mixed patterns of colour are also less visible from a distance. I'm not saying anyone should be berated for wearing black - plenty of cars are black/grey/dark blue and certainly it's not cause to blamed in the case of an accident, but I do believe there's an increased risk. For something better than my opinion, consider the accident statistics for black cars.

During daylight hours, black cars were up to 12 per cent more likely be involved in crashes than white vehicles, while at dawn and dusk, the figure rose to 47 per cent.

It's not a huge stretch to extrapolate this to cyclists.

As others have pointed out, how easily others can see you depends on the lighting conditions. Any time cars will have their lights on you should have as much reflective material (Scotchlite or similar) as possible. This isn't limited to clothing, you can buy tape for your bike in a variety of daytime colours (including black!).

Finally, whatever colours you wear, I would suggest using been-seen-by* lights at all times. Yes, even during the day. In many situations I believe this will make more difference than the colour of your clothes. Lights can be noticed at a glance and instantly identify you as a vehicle moving on the road, rather than a pedestrian or part of the scenery. However, be aware that even lights which provide side-visibility are often not bright enough to make you more visible from the side in daylight. For side visibility in daylight the best thing is to wear large blocks of bright colour.

* Be-seen-by lights - not necessarily bright enough to allow you to see the road ahead, but to make you visible to other road users)

I'd suggest that black will show the dirty less easily than lighter colours. Most of my bright-yellow clothing is spotted with muddsplatters and the occasional oil stain which would hardly show on black. Either way Goretex does require careful washing to keep its waterproof and breathable properties. I prefer not to use these additional products and just rinse in clean cold water instead.

Is it a bad idea to cycle in full black clothes because of visibility?

But you knew that already.

This is about making a choice about safety, that is, staying alive. This is not about will I have to wash it?

Research has shown that increasing the use of visibility aids may improve the ability of drivers to recognise cyclists, as well as pedestrians, and that the ability of drivers to respond in time is greater when cyclists or pedestrians make us e of visibility aids (Kwan & Mapstone, 2004) . Increased cyclist visibility can have important implications regarding the severity of injuries suffered in the event of a crash. After adjusting for potential confounds and level of exposure (ie, kilometres ridden per year), the number of days off work fo llowing a bicycle crash injury was found to be substantially lower among cyclists who reported that they always wore high visibility clothing (Thornley, Woodward, Langley, Ameratunga, & Rodgers, 2008) . Increasing the visibility of cyclists is especially important when considering low light conditions.

Some people do wear black, and are still alive. The ones who aren't alive haven't replied.

Their voices are the loudest.

If you are riding during the day time then black is fine.

If you are riding during dawn/dusk a bright orange jacket makes you much more visible.

If you are riding in the dark then you need lights and reflectives. Colour (black/white/orange) doesn't matter.

In my opinion brightly coloured orange clothing does nothing to improve your visibility in daylight or in the dark, but is really, really good in low light. Since most winter commuting is at dusk/dawn then a bright orange jacket is very useful. I ride with an orange Altura Night Vision windproof and would recommend it. It also has a lot of reflective areas which are good for night riding.

Short answer, yes black is not as visible during the day, night or dawn or dusk. Distracted drivers are way more likely to notice you if you stand out and most of the time Black does not stand out (neither do earth tones). Visibility colors like fluorescent orange, fluorescent yellow, and bright red are your best visibility colors. White is a not a bad color choice for visibility, but there are better choices, especially given the fact that white and dirt and grime do not mix well together.

Also don't count on bright colors to protect you at night, you'll need active lighting (front and back) to help you stay visible at night. Reflective accents will help, but don't count on it during the dawn or dusk which is the most dangerous time to ride.

It's probably a bad idea to wear all black, but you can wear a vest which will definitely improve the visibility at night while wearing all dark. This YouTube video shows how it works.

Full black is just fine. Just make sure you wear a high-visibility vest at all times (if cycling with a backpack - over the backpack). They are actually compulsory in my country for a couple of years.

During the night, you would add a reflective ankle strap, pedal reflectors and spoke reflectors.

The answer to your question is no. Whether in day or at night, wearing all white vs. all black alone is simply not going to have a meaningful impact on your visibility.

Rather than the color of your clothing, the presence of reflective elements built in to the garment should be what you are looking for. As someone mentioned, it looks like you have reflective piping on that jacket. Bring a penlight to shine at clothes when you're shopping to see what will be visible to others on the road. It will have an exponentially larger impact on your visibility than the color of the item.

Obviously this should be in addition to an overall visibility strategy that includes lights and other reflective elements, but your question was about your clothes.

Source: 8+ years of bike commuting, which includes needing to see other cyclists and joggers on the paths and road. I've never thought "my, what a brightly colored jacket, I could see you." Reflective clothing, on the other hand, is always noteworthy for its impact on visibility.

Not the answer you're looking for? Browse other questions tagged safety winter clothes jacket or ask your own question.

57
How can I make my bike (and myself) visible at night?

0
Cheap clothes for 50 km per day in the summer
7
What should I use to wash cycling clothes?
17
Winter commuting - how to keep warm?
5
Canadian Winter Cycling Apparel
12
Suggestions for winter cycling glasses?
7
Fracture in folding frame - safe to ride?
3
Windproof jacket for winter riding
7
How can I cycle in winter while not being able to change work clothes?
52
How can I make it clear to other road users that I'm an inexperienced cyclist?