What are the advantages of handlebars with an integrated stem?

I was doing a bit of research for an upcoming handlebar purchase, and came across this strange piece of hardware -- handlebars with an integrated stem (or possibly a stem with integrated bars). 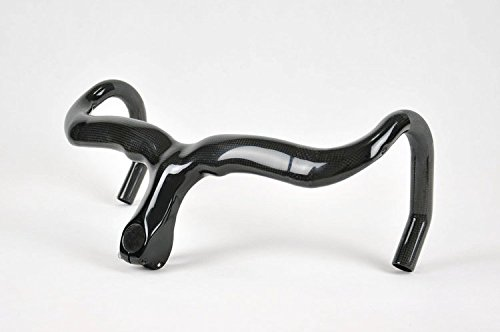 So far as I can see, this has at least two major drawbacks, the first being the inability to adjust the angle of the bars, and the second being that if the handlebars or stem get damaged somehow, the whole thing has to be replaced instead of either the bars or the stem.

Does this kind of design have any advantages? What kind of riders might benefit from using these kinds of bars?

The main advantage is aerodynamics, but it should also be cheaper, lighter and stronger than a two-piece combination. Aside from the shaping, the fibres will run continuously through both "parts" so there's extra strength from that and there are also no stress risers at the joins making them stronger again. In practice the strength and weight are a trade-off, and there's no point making the bars ridiculously strong so it's very likely that they will be made lighter instead of stronger.

Everything else being equal, that would make those bars both cheaper (easier to manufacture, less material) and lighter than a competing two piece product. However, they're likely to be less popular and thus manufactured in smaller quantities than the two pieces, so may well cost more for that reason.

A final tiny advantage is that there are four fewer bolts to worry about, so you never have to check the four bolts that hold the bars to the stem or make sure the bars are at the right angle.

Not the answer you're looking for? Browse other questions tagged handlebars stem design or ask your own question.

4
What are early signs of failure in forks/stem/handlebars?
4
What advantages are there in mounting a butterfly bar with a drop instead of a rise?
4
What brand is this handlebar stem?
0
What could be the reason for stem this far away
3
Replacing mountain bike bars & stem with drop bars
9
Are folding handlebars a good idea from an engineering standpoint?
1
The stem connects the handlebars to the…?
1
Raising handlebars using a stem raiser on B'twin Triban 500
0
What brand is this stem?