This question, What's the cause of the tyre cut, got me wondering if there is anything that can, or should, be done to repair small cuts in the tread of a tire. As I was looking at the damage to the tire it seemed like a bit of Shoe Goo or a similar substance might help to keep the tire from picking up other foreign material that might either work its way into causing a puncture or further damage the tire in some way.

Or is there nothing worth doing for a small cut like that? 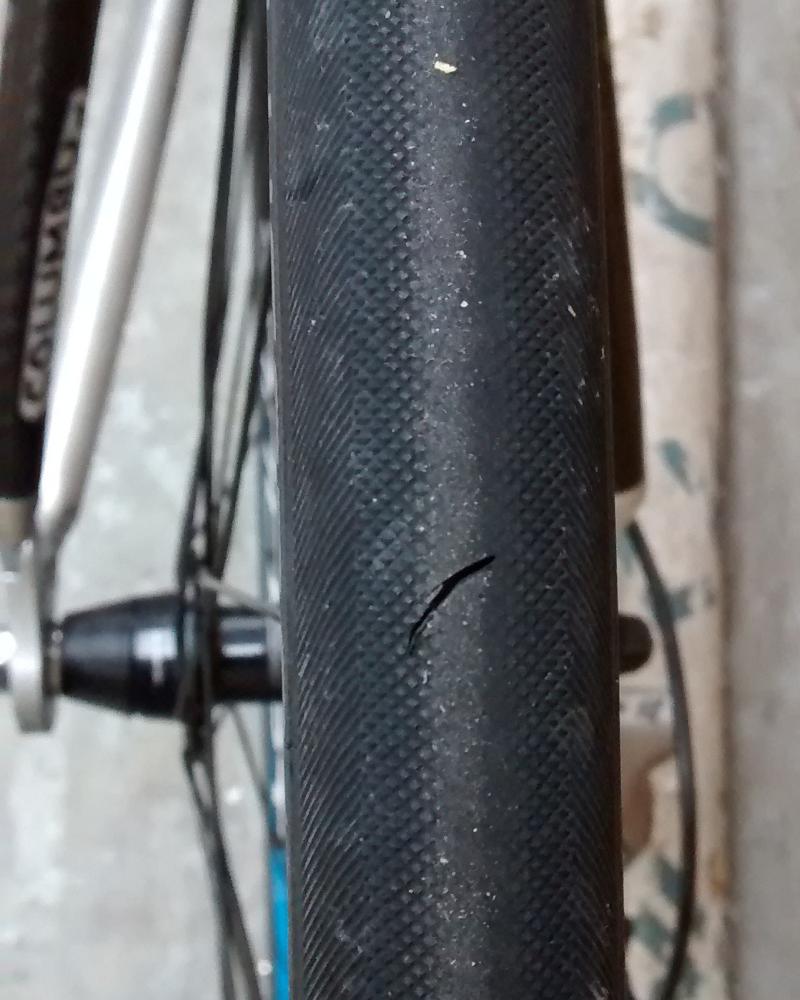 We've tried at the local bike coop, and nothing really works. A shim or boot on the inside helps but putting anything on the outside won't last.

Even using rubber cement and a puncture plug (like a car tyre) doesn't stick very well because bike tyres are not very thick, so there is insufficient "meat" for the plug to bond to. If you make the plug longer, it becomes a spike aimed at your tube and pressing in every rotation.

Prevention is the only option, and that's not always a viable answer.

Narrower tyres could help too, you're sweeping a thinner ribbon of roadway with your rubber.

Someone else might like to comment on tyre sweeper wires, but I've never used them and to my mind the damage is already done once your wheel has ridden over the sharp thing once.

Later: I have successfully extended the life of a holed-tyre by adding a boot on the inside of the tyre using one of those horrendously thick patches that we all seem to have but dislike using on tubes.

The trick was to invert the tyre, and buff the inside very well with an abrasive like a file intended for buffing the tube. Otherwise I treated it like a normal puncture repair.

The only ordering change was to return the tyre to its conventional outside-outness after applying vulcanising fluid and while it set-up, and before applying the patch. I also used the biggest thickest patch I had.

I do not recall if I attempted to add a second patch diametrically opposite the wheel to offset the weight, might be a wise plan.

If your hole is under 2mm in diameter, give it a go. Your only loss is a patch and some fluid, and your time. If the hole is bigger than 2mm then sorry, its new-tyre time.

You can sew the cut together using a needle and a thread. Unless you are using a tubeless setup, you do not even need to patch/seal it afterwards. If you do need to seal it, you can place a patch over the stitches. There are tutorials available on the internet. Even in the form of videos

The thread to be used should be of high quality for better durability. Especialy if the cut is in are where the contact with the surface is more likely. Cotton threads deteriorate quickly when wet. Synthetic materials like nylon or at least polyester of sufficient thickness should provide better resistance. Some reported using a fishing line.

Try taking the tire off the rim, an use Krazy glue to shut-close the cut. Then boot the tire from the inside. If you have an old useless inner tube, cut a nice piece and use it to glue it inside the tire. I have put about well over 2000 miles after I did three of these repairs from 1" screw-incurred flats on my rear tire in my commuter bike.

Not the answer you're looking for? Browse other questions tagged maintenance tire or ask your own question.

5
Repair cut in sidewall of tubeless tyre
2
Why might my inner tubes be getting consistently punctured?
3
Could a flat tyre two days later be due to a clumsy service?
3
How to recognize a bad tire?
0
Slime Smart Tube Exploded when I put it on mountain bike
0
Where is the valve in my handpump - and what stopped it working?
8
How to best quick fix worn out tyre
4
Trainer tire selection (hybrid bike)
8
Should I be worried about small cuts on a tubeless tire/tyre?