What I want is safe (in especially wet/rainy conditions) drive both on-road and off-road with a protection against puncture. However, I do not want to give all my effort to friction when I'm on the road.

Which properties should I search for?

You seem to be looking for a puncture resistant semi slick mountain bike tyre. That's a whole set of compromises, and they're not intercompatible.

For a mountain bike tyre you want big knobbly sections and a thin tyre casing so it flexes easily when you run it at low pressure. But on the road you want high pressure, and for puncture resistance you need a thick casing. The problem with getting both big knobs and a slick tyre is obvious, but that's the most easily solved part - a semi slick tyre - and there are lots of them available. 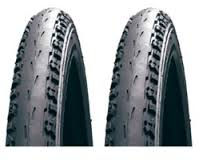 Problem is, off road they don't have as much traction as a proper MTB tyre, and on road they're fine until you lean the bike, at which point they lose traction. I've used these for a while when my commute had an off-road option, but I quickly decided I would ride that to work only when it was dry enough to do it on slick tyres. The semi-slicks worked better than slicks on the gravel, not detectably better in mud (but they did throw more mud up onto me and the bike), and on the road the "lose traction on corners" feature was downright dangerous.

My solution was to buy a second hand mountain bike and use the wheels off that for offroad riding (the bike itself was in very poor condition, so it wasn't worth fixing, but the wheels were ok).

1
Continental 4Seasons vs 4000S
2
Bike weight limits, fatter tyre for more weight?
16
Safety - Improve braking power in wet conditions
4
How do carbon fibre road bikes handle rough conditions?
0
Changing 23mm tyre to 25mm - considerations?
4
My new bicycle skids laterally, especially in the wet; what can I do about it?
5
Mountain bike tyre at road bike pressure
3
Skidding on Rear Tire in wet weather
16
What is the purpose of a tread pattern on city/road tyres?