How often do you need to bleed your Avid Elixir 1

I have a Trek bike with Avid Elixer 1 hydraulic brake. Not sure if it's a manufacture defect but I have returned to the shop 3 times since I bought the bike this April, for them to rebleed.

The brakes get tighten and the tech told me it's due to bubbles forming and would require a rebleed. They did not charge me as it's still within 1 year of purchase. I am wondering if this is normal.

My last rebleed of the rear brake is 3 weeks ago and I noticed that the brake is stiffening up again (seems like the brake is engaged lightly).

Addition based on a comment to an answer: by "tight" the Op means vthat the lever becomes stiffer, i.e. it becomes harder to work the brake.

Firstly, I do not believe (from your description) that air is the culprit here. Air is a gas and therefore can be compressed in a closed system such as a bicycle brake. As PeteH pointed out, air would lead to a brake lever feeling spongy, not tight.

If you say the brake is tightening over time then I would be inclined to think that there is water being absorbed into the system. DOT fluid is hygroscopic, meaning it draws in moisture from the atmosphere which is one of the reasons DOT fluid should be replaced every 12-24 months at most. Although the normal rate absorption is ~3% a year so having your brakes bled three times since April seems a little much, so if it is due to water in the system then I would be looking to have the brakes replaced (ideally with Shimano ones!).

Secondly, how is the bike stored when you're not using it? We were told by a SRAM tech that bikes should not be hung up by the front wheel as this allows air to accumulate at the reservoir in the lever. However as said above air would leave the lever feeling spongy, not tight.

Before you take the bike back to the shop, could I ask you to let a little of the fluid out from the system and then try the lever again? To do this, you'd need a T10 Torx, a cloth and some disposable gloves.

1) With the bike upright, use the T10 Torx to slowly undo the little screw sealing the reservoir, while at the same time holding the cloth just below. Do not take it fully out, only far enough until you see fluid leaking from around the sides. Anti clockwise to loosen, clockwise to tighten. 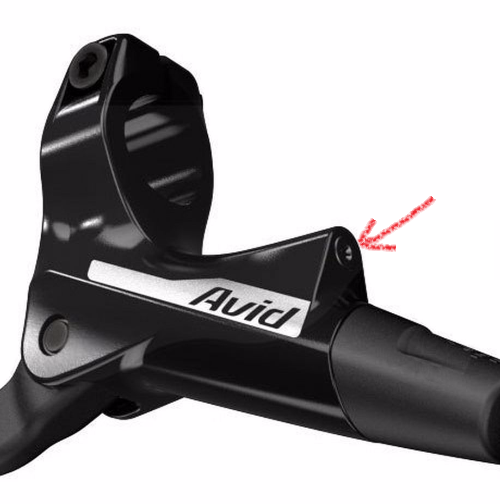 2) Once the fluid starts to leak onto the cloth, very slowly/gently pull the lever. You should see the fluid flow a little quicker.

3) Once you think you've let enough fluid out and while still holding the lever, tighten up the screw. It is important to keep the lever pulled at all times while the screw is undone as this will prevent air being sucked back into the system when you let go of the lever! Once the screw is tight, release the lever.

The idea is to let a little fluid out and try the lever. Then let a little more out if needed. It's easier to remove fluid than add fluid and remember and DO NOT let go of the lever while the T10 screw is loose!

If this works, then I'm sure there is water in the system as what you've effectively done is reduced the volume back to where it was at when the shop bled it. Although doing this will not remove the water, only the water/DOT mixture. So if I were you, I'd be looking for some new brakes (Shimano M615 are fantastic VFM and we've done this for many customers in our store).

Edit: Thanks PeteH! The bikes we sell in the shop (Boardman/Carrera often come with this model over filled from factory). Yes as Warren says, once the fluid begins to soak onto the rag, nip up the screw. It really is only a tiny amount - usually. You shouldn't have to press the pistons back while draining the fluid. The idea is to squeeze the lever to push the fluid out the lever port, hold the lever while you tighten the screw and then release the lever. Releasing the lever after tightening the screw should automatically draw the pistons into the caliper as it will create almost a vacuum inside the closed brake system. If you need pictures to show steps let me know and I'll get some!

Depends on use and conditions. Typically, at least once a season and while not always required, I bleed when I replace brake pads with new ones.

When you get contaminants or air is the system, you typically find that actuation suffers. In other words you need to depress the lever further to get the same effect.

When you say 'stiffening up'; If you mean it takes more effort to move the lever, then something else is wrong. If you mean there is less play in the lever before the pads take effect, then that is a good thing.

Seeing Elixir 1's don't have a contact adjust, they have a preset amount of movement that can be applied through the hose to the pads. In other words the pads will retract the same virtual distance that was applied. Now, if the rotor is not true or the caliper is not aligned straight or you have one noticeable 'sticky' piston, the distance of pad movement stays the same, but is not effectively applied or retracted, so you wouldn't stop as well and the pad will drag. - Easy way to check is lift the wheel of the ground, apply the brake a few times, then rotate the wheel. Most cases you'll hear a drag and in all cases you can see the gap in between the pads and rotor 'wobbling'.

You will need to be more clear about your description and specifically what the brake performance is doing. Spongy brakes and poorly aligned brakes both feel like the same problem, but are caused by different things.

*VERY Important: Watch your nose, fingers and other bits when inspecting the rotors and caliper. It's ridiculous how easy and painful it is to get something hooked by the wheel and drag into the brake system!

Not the answer you're looking for? Browse other questions tagged maintenance repair hydraulic-disc-brake or ask your own question.