Is the 'shark wheel' a good idea for a bicycle?

I recently found a product that is a redesign of the common wheel. It's branded as the 'shark wheel'. It's basically a wheel where the rim is circular but bends like a sine wave. Simple idea but very interesting.

Currently, the company only has skateboard wheels in production. However, I recently saw the owners give a presentation where they demoed larger wheels for strollers, wagons, etc. I can't help but wonder how long until someone rigs something like this onto a bicycle hub and rides it.

The stated benefits are that the wheel has, or can have, a thin tire with low rolling resistance but it grips like a fatter tire because of the way in which it travels over the ground, constantly changing velocity.

Below is a picture of one of the wheels. My question is can this design be applied to a bicycle wheel, and, if so, would it be more performant is certain cases, e.g. off road? 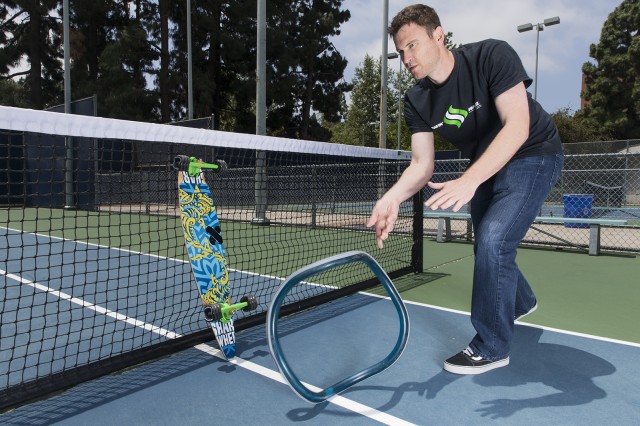 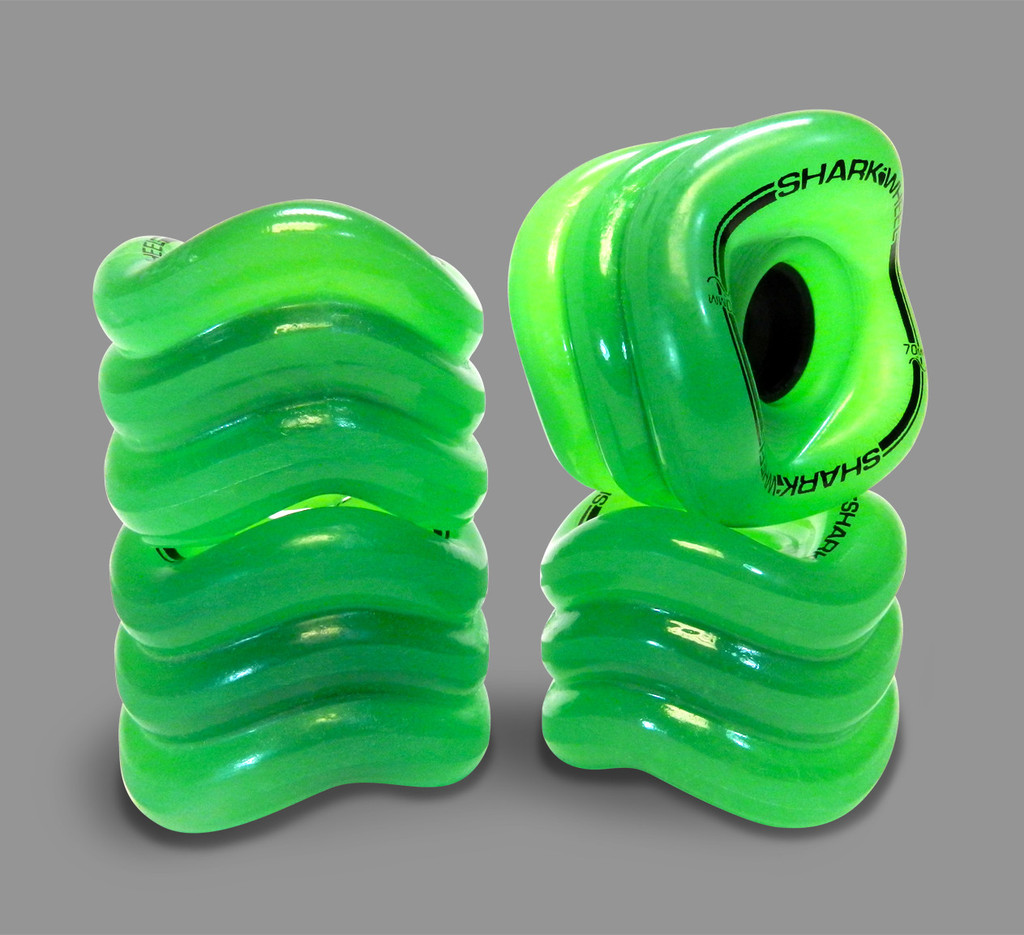 On a skate board type application it is effective

On a bicycle it is not effective and impractical to implement 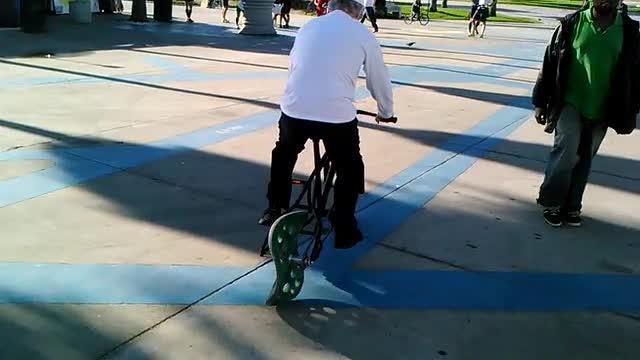 On a skate board you want a wide contact patch. On a skate board you absolutely don't want the wheel to tilt. The idea is to keep the width but reduce contact area. The reduced contact patch has lower rolling resistance. Within the virtual flat contact surface are circular surfaces that will shed debris (small rocks). They can also can go with softer material so you give back on rolling resistance but get softer ride and more grip. They are not taking over the skate board market but they have a niche and it may grow to dominate. It is more than just a fad with no real value. And some people will buy it because it looks cool.

Basically none of that scales to bicycle.

Unless it's actually circular then it's going to be a very bumpy ride. If it's a circular wheel that weaves laterally it could work as described, to some extent, but the float advantages of a fat tyre would obviously be lost. Actually making a lightweight bicycle wheel with significant lateral wobble would be difficult, and the optimum number of wobbles would be interesting to work out.

Cornering would be interesting. Note that the skateboards have paired wheels so they never tilt relative to the ground, but bike wheels do. Once the wheel tilts it's no longer circular, it has bumps. So for effective cornering you would want lots of wobbles per revolution, making the rim effectively a zig-zag with a pitch of perhaps 5-10cm. But a conventional beaded tyre will not attach to that sort of rim, and the limit might be only 2 or 3 wobbles. Once you switch to a solid tyre molded onto the rim you basically have a wide rim with plastic tread on it, like an old-style tractor wheel. That will be heavy and slow, so it's probably not what they're talking about.

But a wheel with only, say, 3 wobbles per revolution will be very unstable when cornering hard. Effectively there will be three "feet" contacting the ground for each revolution of the wheel, the feet being those parts of the rim that wobble down into the turn.

You could make one of these using a big-wheel tubular tyre tied to a smaller, wider rim. If you used the common 622 tubular and a 406 rim like a cheap kids BMX wheel you could at least try the idea out. Kids BMX's often have enough frame clearance that you might even be able to ride the bike with that rear wheel installed.

Some of your description sounds sciency but doesn't seem to mean anything.

literally a reinvention of the wheel

This is a phrase used to market the product, and could best be considered a trademark, like "fair and balanced" or "just do it". It doesn't mean anything.

That's either a tautology or translates to "bumpy". With a round wheel on a flat surface the axle has constant velocity and any other part of the wheel has constantly changing velocity. For this wheel to be different the axle would need to bump up and down (or from side to side) in that situation.

would it be more performant in certain cases

No, because it isn't human. That's a French word meaning "a man who is performing", and adjectives like "more" don't apply. Like "utilise", it's a word primarily used by advertisers, and it's reasonable to assume anyone who uses it is trying to sell you something by lying about it.

Answer: No, a shark wheel would be a bad idea on a bicycle.

It might be tenable on a straight-ahead flat race with no turns - IE a drag strip. However any need to turn will end in tears because bikes lean to turn. You cannot ride a bike vertically all the time, even on the straight a bike will tilt left and right.

There's no aero advantage - if anything it will be much worse than a plain wheel. You'd need a fork wide enough to take the whole width of the rim's wobble.

Even if its just scaled up and not out sideways (ie you'd have a hundred wobbles around the rim of the wheel not just three big ones) cornering will likely be dreadful.

I can see some advantage if this was used on a 4WD car. There, the front wheels turn but stay relatively vertical and increased traction with side lugs, but the airflow will be awfully choppy.

If you like these and think they're useful, I have some Biopace chainrings you may buy, and search out some Sickle Cranks and carbon fibre stick-on transfers on ebay.

I am the COO of Shark Wheel and thanks for whoever brought up the topic. I caught this thread on a Google Alert about Shark Wheel.

Some of you are making correct statements, while some are not. We have learned a lot about the physics of the wheel - testing it in different applications and different environments. I won't tackle everyone's comments here, but the short of it is that the Shark Wheel does not lean/tilt. That is its weakness. You will never see the Shark Wheel on a motorcyles, bicycle, 2-wheeled scooter, or a rollerblade. Over 90% of wheeled applications do not lean however.

Lastly, the ride is perfectly smooth! There is no bumps to feel in the ride whatsoever. The bike shown above was a fun prototype we built when we first started. It was fine to go straight forward, but the worst experience when tilting!

The stated benefits are that the wheel has, or can have, a thin tire with low rolling resistance but it grips like a fatter tire because of the way in which it travels over the ground, constantly changing velocity.

This is nonsense. Rolling resistance and grip are, essentially, the same thing so claiming to reduce one while increasing the other is a huge warning of bovine excrement.

The part of the wheel that is in contact with the ground is stationary, unless you're skidding. The wheel doesn't "change velocity"; rather, the contact point moves from side to side. All that means is that, at some points in the revolution, the tyre is, in effect, lying diagonally across the road. That does indeed give more grip, because it means the tyre is effectively wider. Guess what? It also increases rolling resistance. In fact, it probably increases rolling resistance more than just having the fatter tyre because, by laying the tyre diagonally across the road, part of your rolling resistance comes from the tendency to flex the tyre perpendicular to the rim (imagine how an ordinary bike tyre would try to flex if you dragged the bike sideways).

Furthermore, the effective tyre width is uneven: at other points in the revolution, the tyre is parallel to the direction of motion, so it's acting like the skinny tyre it is; at other times, it's diagonal and acting fatter. The result is inconsistent levels of grip through each rotation of the tyre. That wouldn't be much of a problem on a skateboard, since the wheels aren't used to apply power, they rotate very quickly and there are four of them, and, on average, they'll be in different phases. But on a bike, where a single rotation of the wheel carries you a couple of meters and you're applying power through just one wheel, that would be a nightmare.

Another issue is skidding. Suppose you lock the wheels. On an ordinary tyre, both tyres are pointing forwards so the bike moves in a fairly predictable way. With these tyres, your front and back wheel, when locked, are pointing in some fixed direction but that direction could be anywhere between "a bit to the left" and "a bit to the right", independently chosen for the two wheels. So now even a straight-line skid can acquire a rotational component from your back wheel pointing one way and your front wheel the other. And it gets even better: as you skid, the wheels might find some grip and rotate. That puts them in a different configuration so now your skid is being pulled in a different direction!

It would definitely depend on what you would be doing. It might be nice for a casual road bike because it supposedly absorbs most of the bumps in the road. But on dirt with mountain bikes I feel that it would slide all over the place.

Not the answer you're looking for? Browse other questions tagged mountain-bike wheels wheel-building or ask your own question.

12
What is a good rear wheel for a heavy load?
2
I need help replacing my bike's tube
2
How to Inflate Tires
5
How to avoid turning the spokes while tuning the wheel
3
Are carbon hubs a good idea?
8
Asymmetric wheel. Which side should the “asymmetry” be on?
2
how do I adjust the wheel?
2
trueing front bicycle wheel
3
My rim exploded inflating on an automatic pump of a gas station. Should I reuse wheel's spokes/hub or buy everything new?