Child seat: how to keep the child's head from falling forward?

When my child falls asleep in the child seat, his head falls forward.
How can I keep his head back?

The child seat is a modern type with a back that can be tilted back to prevent that. It works, but only as long as the bike isn't moving. But at speed, the seat's movements from an uneven road surface and from simply pedalling will slowly but surely make his head fall forward. Short of replacing the child seat with one whose back can be angled even further back, what options do I have?

I thought of the whiplash protectors used in Formula 1 cars: somehow strap the child's helmet to the seat back. But that would be neither safe nor effective, as such a strap would only tug at the helmet (not the head) with the risk of slow suffocation or at least a helmet that slides into the neck and would no longer protect the head in case of an accident.

Let me add a fun photo: here, a cloth bag is hung from the helmet in an attempt to keep the child's head from falling forward. We did NOT actually do that, but it shows the idea. 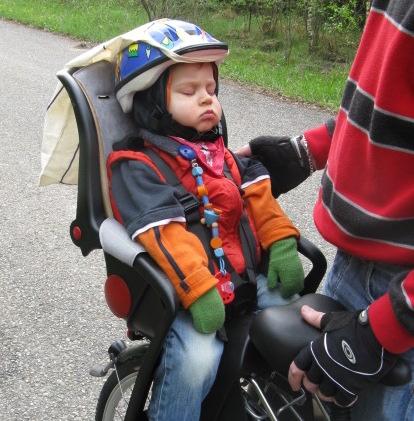 safety child-seat
Share
Improve this question
asked May 1 '11 at 21:01

We have a neck pillow to fit our youngest. Similar to this one...

She went down a good bit of the the Katy trail using one of these in a Topeak rack seat. Works like a champ.

Here is a solution that actually worked very well -- and during our testing it appears safe to use, seemingly also in the event of an accident. (If you disagree, please explain why!)

What we did was to loop a thick soft rubber band around the helmet's headband, and then secure the other end of the rubber band to the seatback using a bit of string through one of the shoulder-strap openings, to achieve a horizontal pull.

Earlier, we tried looping the rubber band through one of the helmet's air vents, but this caused problems: pulling the helmet back towards the neck revealing the forehead, and potentially putting upwards pressure on the chin strap. Evidently, the helmet's shell should be left alone.

Attaching the rubber band to the helmet's headband was much better. As you can see from the photo, it provides a very level pull (not angled) in the perfectly opposite direction of the force of the falling head. The length of the rubber band also allows sufficient freedom of movement so it doesn't restrict the child when he's awake. Since the headband is already designed to spread the pressure evenly around the head, it also appeared to comfortably spread the "hold-back force" (feel free to edit my lacking English). 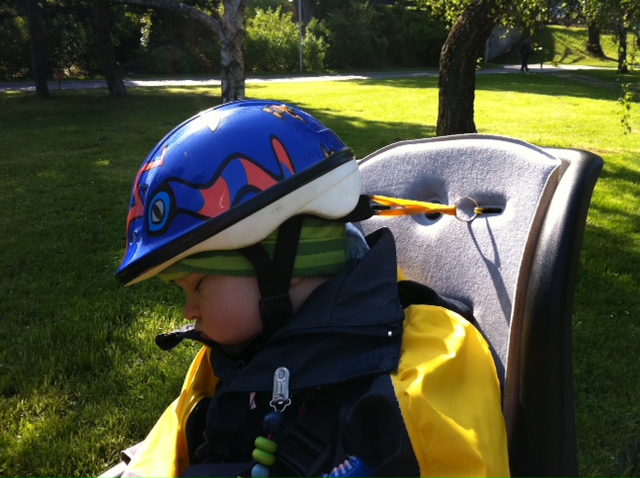 The seat-back curves backwards towards its top. So if your child were a little higher in the seat (taller/older or, perhaps, sitting on a cushion), then their head would lean back more.

Having a little padding behind the upper back and neck shoulders (so that there's more room for the head to fall backwards) might do too: a "travel neck pillow".

The back of the helmet is pushing the head forward, away from the seat (but I can't suggest altering the helmet).

Some child seats come with an optional "desk" specifically for this. The BoBike "handlbar", for instance, is padded up to the point where most kids won't actually be able to hold on to it: http://www.gazellebicycles.com.au/component/content/172.html?task=view

I would try to add something like that, and probably start with a seatpost-mounted handlebar from a tandem (often they use a standard stem and a shim, but you probably want a tandem-specific extending stem). 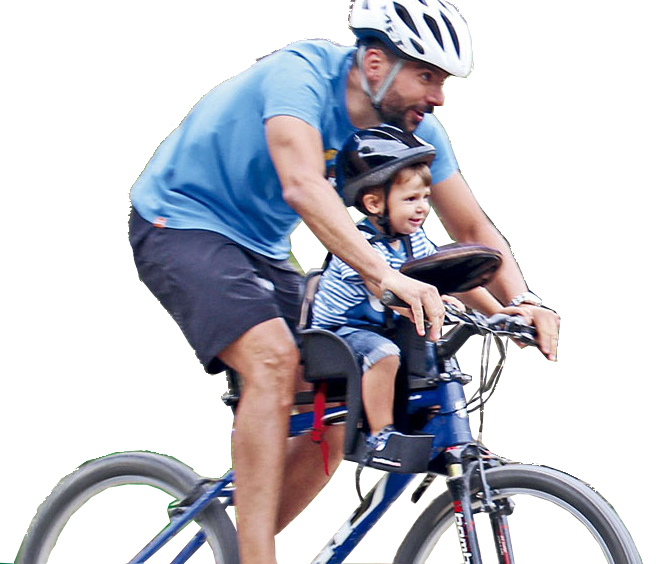 How about a neck pillow? 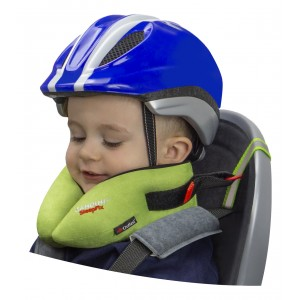 It’s actually made to solve this problem. Ships from UK, I think. http://www.sandini-online.com/sleepfix/kids/sandini-sleepfix-kids-bike-gruen

20
At what age/stage should my child be at before I start using a child seat?
2
Child seat (or rack) at the seat post
3
DIY solution for carrying kids on a long-john: ideas?
3
Rear-steer tandem with middle child saddle
2
Not enough space between front mounted child bike seat and rider
6
Child sleeping in bike trailer
11
Max weight of child, for rear bike seats - why is it always (seemingly) 22kg?
7
Effect of helmets and other impressions of the bike rider on driver behaviour?
0
Removing cushion from Aldi Bikemate Boodie seat
7
Child seat: how to protect my child's face from rain and wind?