I am curious if there is a technology that allows bicycles to run over it, but will destroy car tires. From my understanding, usually poles like this are placed on trails to prevent vehicles from passing through. 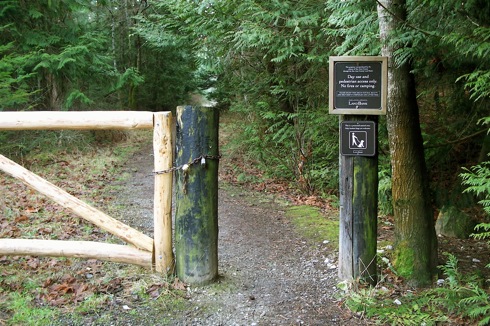 Apparently, in Russia, there is a common issue with car drivers using the sidewalk. To allow the passage of bicycles and not cars, without making the pedestrians navigate between poles, maybe some kind of technology can solve the problem while keeping everyone safe. 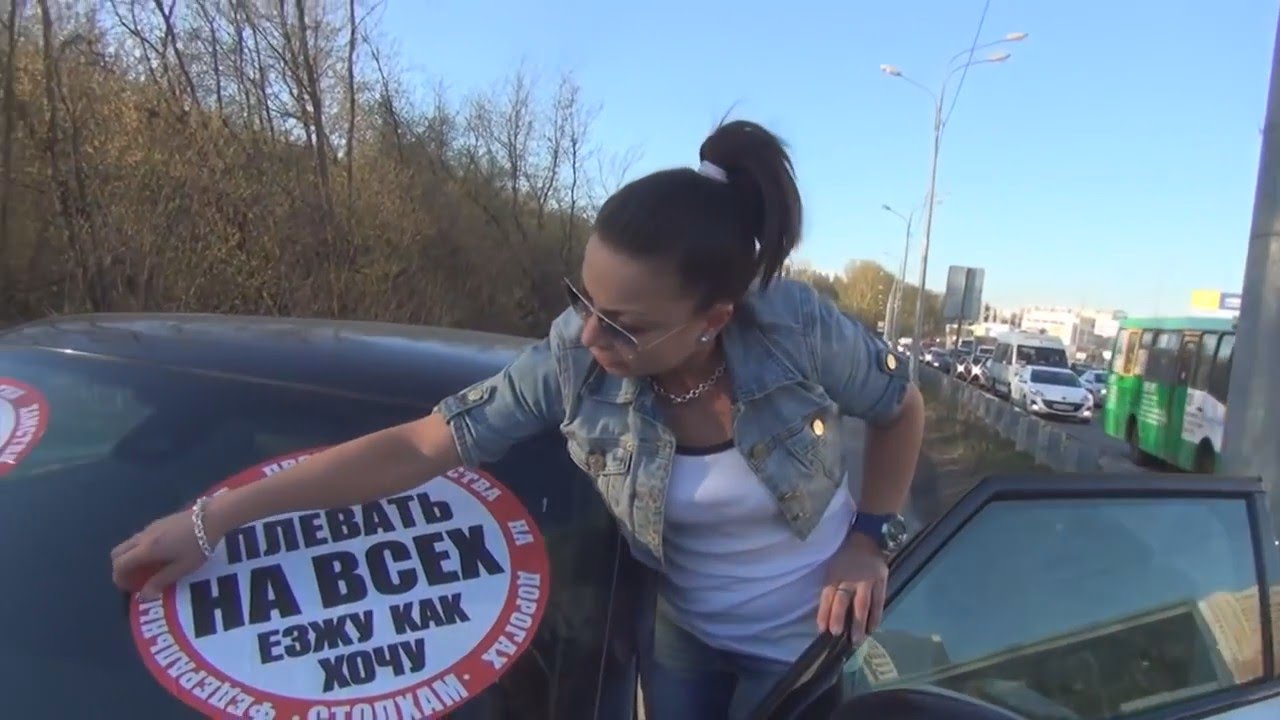 Explaination from comments: The russians have a real problem with drivers on the footpath / bike path / sidewalk. So there have been groups of vigilantes stopping a car on the footpath and haranguing the driver for bad behaviour. One thing they do is slap a huge hard-to-remove sticker on the car's window right in front of the driver. Literal sticker text translation would be "I spit on everyone and drive how I want"

Keeping cars off a bike path is easily done with bollards. Blocking motorbikes is the hard part and not one I've seen a good solution to, as off-road motorbikes aren't much bigger than bikes (narrower than trikes) and can be lifted over a step-over gate.

Good solid posts 1-1.5m apart will completely block cars, and the middle one can be a removable, lockable version to allow service vehicle access. Alternatively a gate can be provided next to the bike gap. This also permits horse riders. Where the primary concern is horse riders but bikes are permitted, a gate that a horse can step over is sometimes fitted. A cyclist has to dismount and lift the bike over - one thing on a lightly loaded MTB, another touring with a trailer. Here a picture of one (CC-by-SA David Hawgood via Geograph.org.uk): 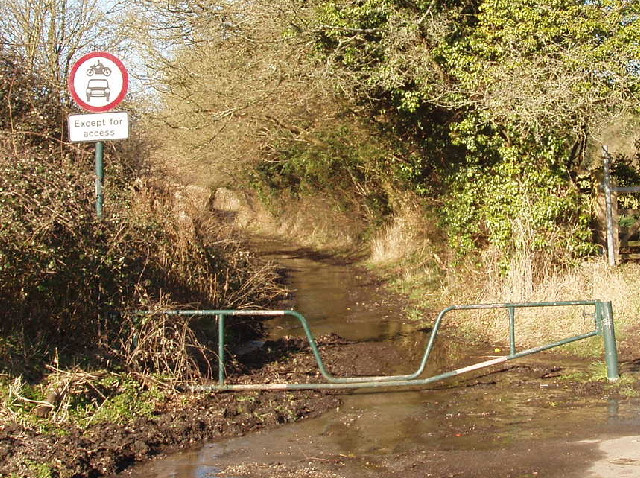 In this case it would also be possible to get a bike round the gate.

There are some truly awful attempts to allow bikes while preventing motorbikes. This Street View shot shows a gate open, but when I passed that way on a recent tour (in peak commuting hours) it was locked. You're supposed to push your bike through the slot and walk round. Mine was far from fitting - the aerobars and phone mount were too high, and the drop bars were too low and wide. I didn't have panniers but they wouldn't have gone through either. I ended up lifting the 40kg laden bike over the gate. Even that isn't an option on some of these facilities. In one case (no photo online and I'm not going back that way) the gate was over 2m tall, and required me to loosen the screws holding my aerobars, or backtrack and ride a very busy fast road.

Some care is needed in designing the layout of bollards and similar to ensure that recumbents and especially trikes can pass, but a straight stretch of path makes this easier.

There will be legal issues that make this more complicated as it seems. For example, if there is a risk that the car tires get destroyed while the car is travelling at speed, this could lead to nasty accidents where people get seriously injured or killed, including innocent bystanders. And even if only the car tires get damaged, in many jurisdictions you don't get a right to damage somebody's car just because they broke a traffic rule.

Also of course it has to be absolutely failsafe that the device isn't triggered by anything else, like people or horses stepping on it.

So the use of such devices will probably be restricted to a narrow range of situations, e.g. law enforcement, used by trained professionals with clear procedures that minimise the risk to the offender and any bystanders and a risk assessment that justifies its use in the individual case (e.g. against terrorist attacks, or in a car chase where the driver has already endangered bystanders and must be stopped at all costs).

I don't think that the wish to stop a driver using a bike path is enough justification for endangering the driver or even just damaging their property.

All the measures (that I can think of) that stop cars from entering a path are passive and obvious, so that potential offenders can see and avoid them, like bollards or gates. Even automatic raising bollards need lights and warnings etc., they can't just pop out of the ground unexpected (not that it helps much, there are loads of funny videos on youtube of drivers following behind buses through bus gates and hitting the bollards...)

So you can stop cars by restricting the width (bollards, gates), but there's almost nothing you can do against motorbikes if there should also be access for (larger) bicycles, wheelchairs, buggies etc.

From a purely technical point of view, it would probably be possible to build a barrier that uses the weight of the vehicle, so motorbikes will be stopped but bicycles can go through.

An obvious solution is a deep trench across the path that is covered by a plate held up by strong springs. If anything above 200 kg drives onto the plate, it will tilt down so the vehicle ends up in the trench, while everything lighter can pass. Or it tilts down a bit and exposes spikes that damage the tires.

However, while this would technically be possible, you'd probably get into real trouble for all the reasons above. And it gets more complicated if there's a risk that a horse or cattle steps on it, or a hiking group of several people.

With modern technology it should be possible to have a smart camera that recognises the type of object that is trying to get through and can open or close a gate accordingly. If it recognises a car or motorbike, it simply locks the gate, but opens it for any other user. I assume this will be legal, but expensive and will need much maintenance.

Yes, this is possible, and actually quite simple. Pedestrians would hate it, though:

Since car tires would roll over two connected spikes, they cannot depress both simultaneously. Bikes, however, would only depress a single one that would give way without much resistance.

Pedestrians would hate such spike barriers, because they would frequently hit the spikes with their toes when they walk over it.

However, such destructive barriers are going to be understood as an act of warfare by motorists. And that's definitely not what cyclists want. We need car drivers to respect us, not to be our enemies. Because, let's face it, motorists have pretty deadly weapons at their disposal...

Assuming you want to deploy them on the private road or anything the like, these even work against tanks, are not much more dangerous than just boulders and also look nice enough. You cannot easily remove them, and cannot pass through without damaging the car. There are many such structures in Switzerland, remaining from the war times. Just leave a half meter gap somewhere for the cyclist. 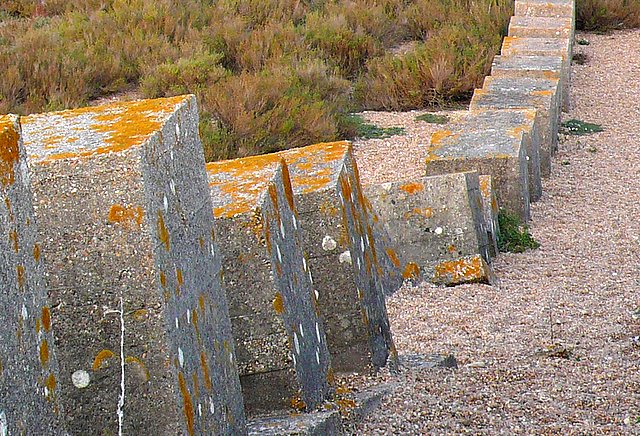 22
How can I look unsafe to a car driver but be safe
14
Determining if a road is safe to bike on
4
What is the best Anti-Pollution Mask?
8
What are some ways to keep biking when you have a car?
10
How do you ride on a road that doesn't have a bicycle lane?
6
Sunglasses anti-fog solutions safe for cycling
14
What to do when a car turns into a side road (etiquette)?
87
How to pass a bicycle while driving a car
6
Will tires with spikes on a loaded heavy touring bicycle puncture the tubes?