Are collisions with animals something to be worried about when cycling in the country?

I know that driving at dusk in wooded or otherwise open areas greatly increses your risk of collision with an animal, whether that is a deer or other wildlife. I would like to know if when cycling at speed this is something I should keep an eye out for. Have there been instances where a cyclist on a road has collided with a large animal?

Sure, there have been cases of hitting an animal in the day or night. Here is an article of a cyclist being attacked by a moose, for example. In addition, you need to worry about road hazards since you won't see them as early.

Obviously, the amount of hazard depends on the particular location, but you should have good lighting and reflective gear at night as well as be prepared to slow down and stop if necessary. If the area is known to have hazards, it may be advisable to go a little slower so you can stop quicker if needed.

I've been hit by a kangaroo, luckily a small one, while touring. Roos are not well adapted to wheels, their movement pattern is to hop in a straight line for a while then swerve, and they flee the same way. One bounded along next to me for a few seconds, realised it couldn't get past me, then swerved across behind me, hitting my pannier with its head. Luckily I stayed upright. In retrospect I should have hit the brakes as soon as I knew it was there but at the time I went "wow, a kangaroo! Hey, WTF" because it all happened that quickly.

Fortunately most large animals move more slowly than that and are better adapted to wheeled traffic. With large herbivores they occasionally panic and bolt across in front of you but rarely try to attack you (Batman's answer has a counter-example). In that case slowing down and being alert is your best defence. If something big decides to run through you, drop the bike and get out of the way.

But there's no excuse for going so fast with so little visibility that you hit one of them. If you'd hit a cow, you'd hit a brick wall. Or a fallen tree. That's just dumb. These days you can buy ridiculously powerful lights with good runtime, so if you're going to be riding fast in low light, buy one. Better, buy two so when one fails you don't have to walk home. It's just part of the cost of riding at night.

I have run over chipmunks 4 or 5 times, and hit deer twice in my rides on country bike trails. The deer caused the crashes both times, but neither I, the deer, or my bike was hurt. In both deer crashes I had some time (but not enough) to brake. Both deer crashes happened during the day.

I'm very wary of deer now- they are incredibly stupid and simply don't understand bikes. When I see one I slow down and stop if it crosses the trail in front of me. (They virtually always travel in groups of 2 or more- see one and look out for the ones you don't see.)

Imagine stomping along a darkened rural road at your top speed, and running into this unyeilding mass of sheep flesh.

Its totally possible for any domesticated animal to get out of their paddock and stand in the road - they're a bit stupid mostly. 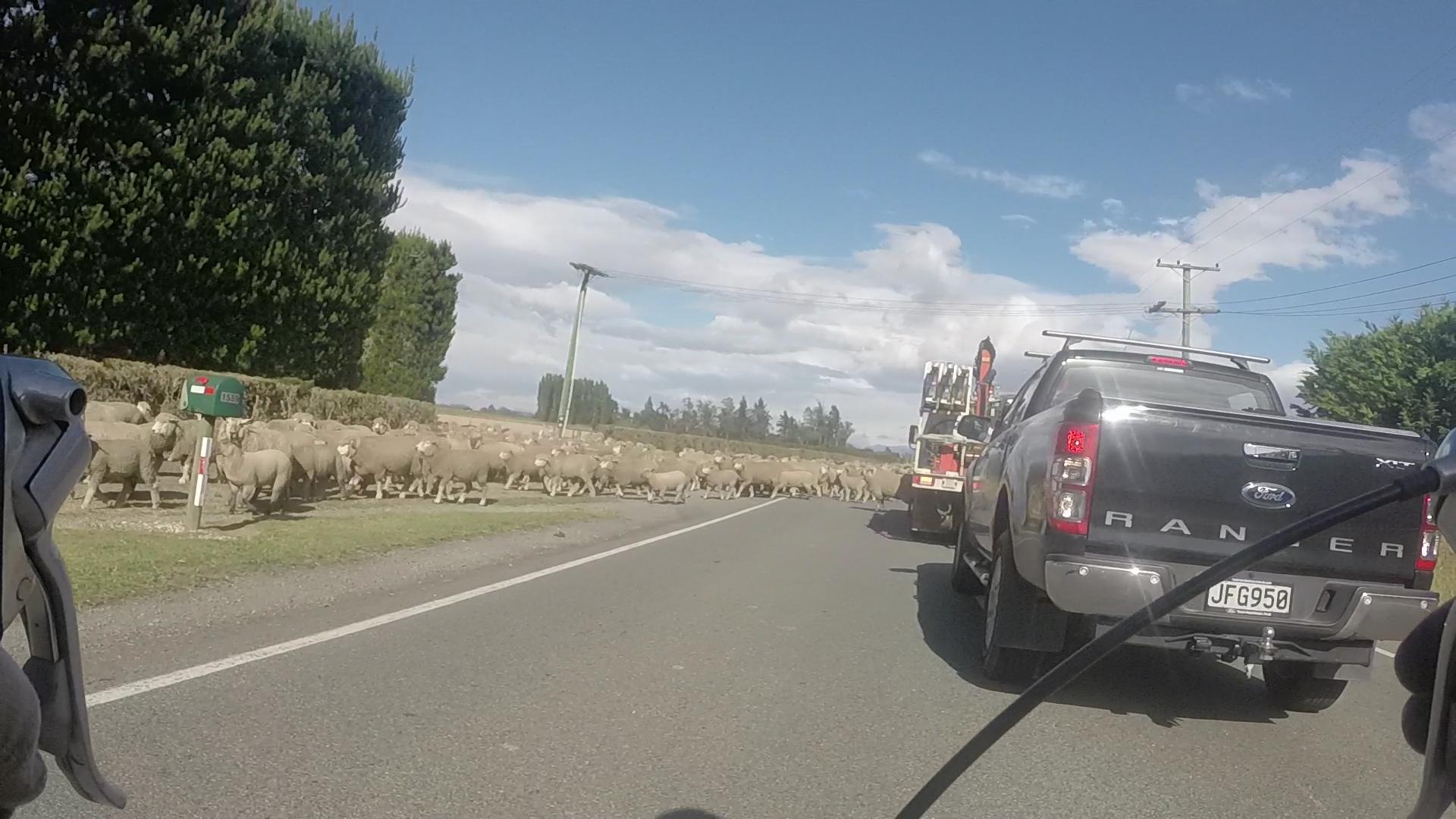 Potentially more dangerous than hitting an animal is swerving to avoid hitting the animal and going off-road and crashing.

This often causes significant damage to the bike and rider -- sometimes even more damage than if you had hit the animal in the first place.

However, it does help with your overall karma to not unnecessarily kill animals.

Fine print 1: I wish there were a way to not have to eat as many bugs as I do in the summer.

Fine print 2:A close friend in college swerved in his car to miss an animal and drove off the road, flipped his car and died. While I love animals, I would love to have him still in the world.

Just 2 weeks ago I hit a deer on a night ride. I was headed down hill at a little over 25 miles an hour when it ran out from behind some bushes. I didn't even have time to hit the brakes before impact. I flew over the handlebars, rolled twice, then slid another 15 feet on asphalt. Luckily my heavy winter gear protected most of my skin. I walked away with only relatively minor road rash and a sprained wrist. I consider myself incredibly lucky. Almost every piece of clothing I was wearing was shredded though, and the bike needs to spend some time in the shop.

So yeah, watch out for those animals.

Dead animals on the road in the dark are my primary concern, but mileage varies. Dogs, snakes, and deer are the most common ones I see.

Dogs are most concerning as they will sometimes give chase. I've read that dogs can determine an intersect point between a moving object and them, but they cannot adjust very well to something which suddenly alters it's speed. The advice I've read, if chased by a dog, is to maintain a speed, and then accelerate when the dog and the cyclist are about to make contact. The cyclist will be just outside the dogs reach, and the dog won't be able to adjust.

Snakes around here are mostly harmless and small, but I prefer not to kill living things if I can avoid it. In other areas, there are any number of venomous snakes, and riding one over is a good way to encourage a snake to strike one.

Deer are disconcerting because they really aren't afraid of cyclists and seem not to understand what I am. I have seen video and read accounts of deer striking and mountain lions attacking cyclists and knocking them off their ride. Any large animal could easily knock one over and cause harm. Predatory ones, especially big cats, could prove the most dangerous as a cyclist tends to resemble fleeing prey.

Absolutely it happens - and its not just night time. The Bastard is a wonderful downhill road where I've done 60 km/h and good cyclists can hit 75-80 km/h.

The sheep was in the road, and the rider went around its head-end. Sheep being stupid walked/ran forward straight into the path of the cyclist.

So for sheep, go around the back-end. This rule of thumb may not apply to other animals. 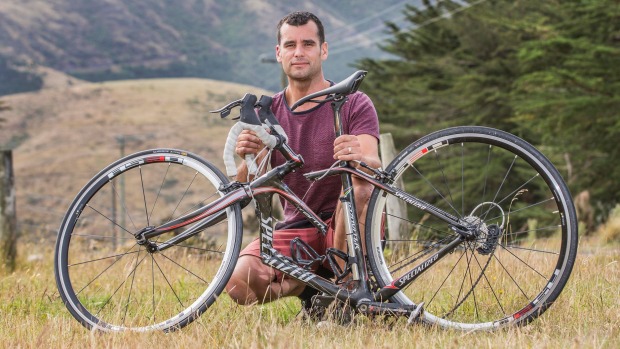 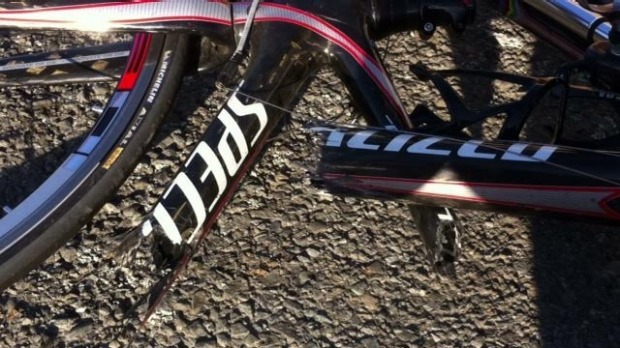 On the plus side, he lived, the sheep ran away, and now he's got the start of a folding bike project.

I'd say riding near any wooded area can be extremely hazardous, though usually only at night.

Just last night while heading home, a raccoon was on the opposite side of the trail, and I suppose it tried to attack me. (Mother "defending" youth perhaps.)

Either way, I was flying at about 40mph. It hit the front wheel as I tried to swerve away, was thrown downwards below the wheel and practically halved. I, however, was flipped while swerving, landing on my back and sliding on pavement for 20 feet. Ow. Luckily a family heard my furious strings of profanity and brought me in to clean the gashes and fix the bike up.

Not the answer you're looking for? Browse other questions tagged animals night-riding or ask your own question.