How to safely transport a Brompton by air?

I now own a Brompton folding bike.  (Fortunately, I bought my plane tickets first, as I am also now broke!)

Anyone here ever checked one into baggage in a B-bag, and suffer damage?  If so, what parts were damaged? I want to protect those parts, and I don't want to disassemble/reassemble. I suspect the bag itself is more likely to be damaged than the bike, but would like to learn from the experience of others.

Anyone here ever carried one on?  I've read that this can be done, but after seeing it in the bag, I don't believe it.  In fact, I think they're going to charge me extra for the size.  (See update below.)  Which reminds me of another related question:

Has anyone ever been charged extra on the grounds that the picture of a bike on each side of the bag makes it "sports equipment"?

UPDATE: Checked from IQT to LIM on Star-Peru.  Completely unusable on arrival.  Repairs very expensive.  Also, it does NOT fit in most airline overheads and is significantly larger than the explicit limits for carry-ons at many airlines.  Perhaps (as I've been told) it can be done on Southwest, but Southwest doesn't go anywhere that requires an airline.

UPDATE TWO: Every trip with the B-bag, there has been minor damage, but not nearly the disaster of Star-Peru. I finally went and got a Chubby which protects it much better and carries all my other stuff between flights. At the airport, fold the Brompton, empty the Chubby, put the Brompton in it, pack some of my things around it, and carry on the rest. Have to pay an oversize fee, or a bike fee, depending on the airline. Sometimes it's hard to predict which. Some airlines will treat it more gently if they know it's a bike; some the opposite. Also hard to predict.

I check in my Brompton when I fly. I built a special case for it in my workshop using 2020 extrusion and coroplast that is 24x24x11.5 inches and exactly fits the Brompton.

They also sell hard cases but I didn't want to spend $300 for one of them.

It doesn't look like a bike case so I don't get charged the bike surcharge. When asked what's in it, I say "circus equipment" which is appropriate as one of the sides was made with coroflex from a circus sign. 24x24x11.5 is exactly under the maximum size specification for luggage and so I don't get an oversize surcharge -- however, it still get put in the oversized luggage area, most notably because it doesn't have handles.

Works well. It's not collapsible so I have to store it at my destination. I think the next iteration of it will be to put wheels on it so it can turn into a bike trailer at the destination. 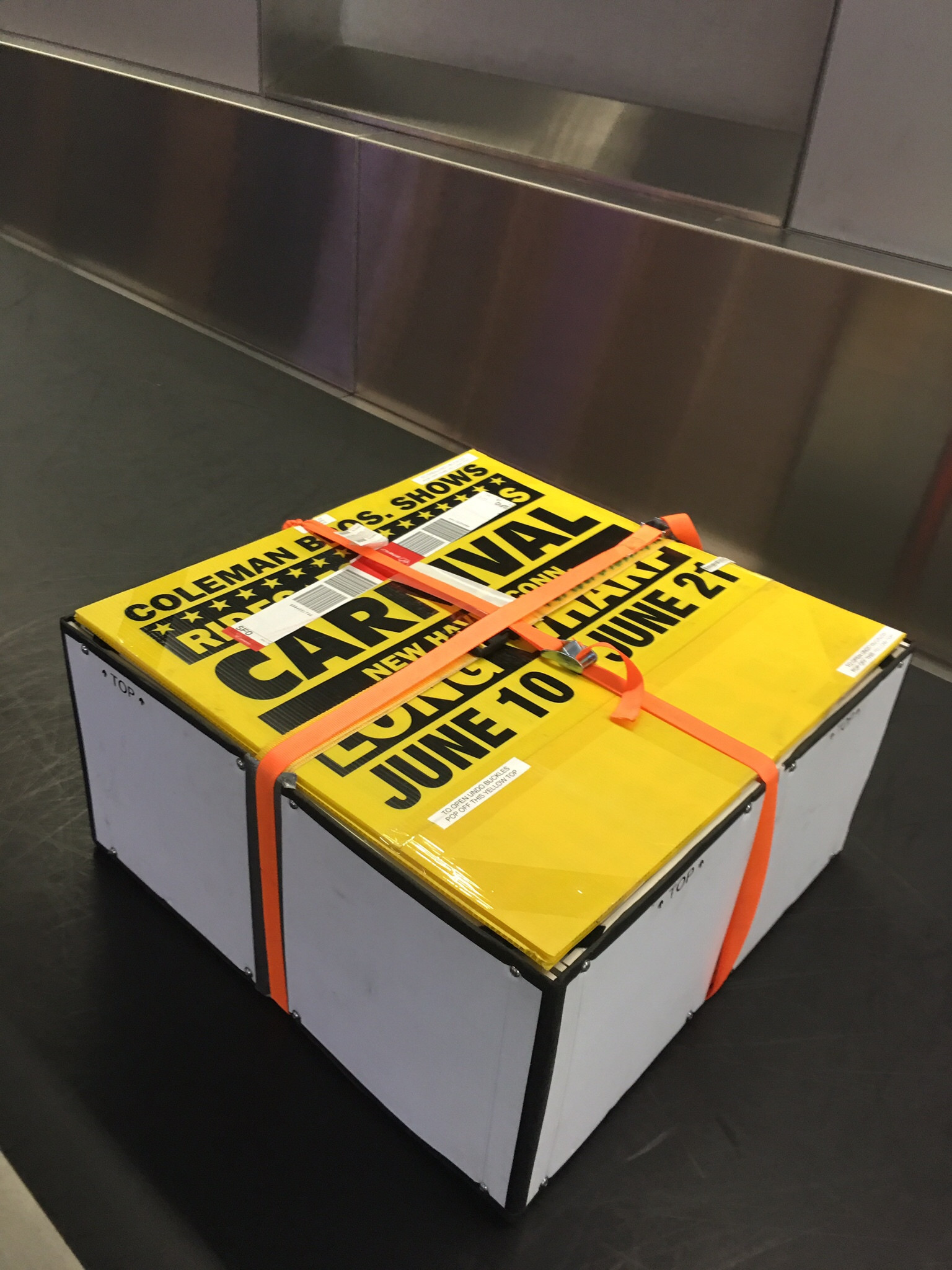 With your soft bag, I'd put duct tape over any bicycle logos. Not just to avoid the surcharge but to avoid theft. Baggage handlers ignore any fragile labels so that won't work.

The fragile bits: The parts most likely to break are the hinge clamps and the pedals. Be sure to take off the folding clamps and bolts completely as they are known to snap when exposed. Carry a small pedal wrench or hex wrench (depending on your pedals) so you can take off your pedals. Taking the seat off and tucking between the frame is also a known tip to prevent damage.

I'd also put pipe foam over any exposed tubing (especially the handlebars) and maybe a sweatshirt or other clothing on the rims to protect them and the spokes. You can also unloosen and rotate the handlebars with a hex wrench so that the controls aren't as exposed.

Finally, you asked in comments about convertible trailer / cases. The Cyclone IV Chubby is one of them:

Flying with a Brompton [as a carryon] is typically dependent on the airport staff and flight crew, rather than airline policies and procedures. I've had success getting the bike on larger planes no problem, mostly because overhead compartments were very large, or because there was sufficient space to store the folded bike (with seat and pedals removed) with strollers and folded wheelchairs. I'll even refer to it as a "mobility device", which will sometimes spook TSA into thinking that they're denying me accessibility or civil rights.

Again, this is mostly dependent on the gate/flight crew's level of tolerance/patience. The easier you make the process for them, the more likely they are to let you take the bike on the plane.

Here is a good blog post about the process itself.

A second, great blog post with tips as well.

Generally, the bike has suffered no real damage when I've carried it on or gate-checked it.

Not the answer you're looking for? Browse other questions tagged folding-bicycle transportation brompton or ask your own question.

1
How do airlines calculate the cost of a Brompton?
1
Getting a Brompton on and off a plane without going broke

12
Replace Brompton folding pedal - what tool is needed?
8
When should the metal clips be replaced on a brompton folder?
4
Brompton front light recommendations?
4
Service a Brompton
7
Any way to transport kids on a folding bike?
1
Seat shim dimensions for Brompton
2
Air transport of a MTB with hydraulic brakes
1
How to remove rear wheel of old school Brompton 3-speed
2
how is the middle of a folded Brompton supported?