How to get this dustcap off?

I have this problem where my pedals seem to be able to be able to rotate on an axis perpendicular to the straight travel of the bike. To take off the cranks, I need to get past a dustcap. Unfortunately, the dust-cap looks like this: 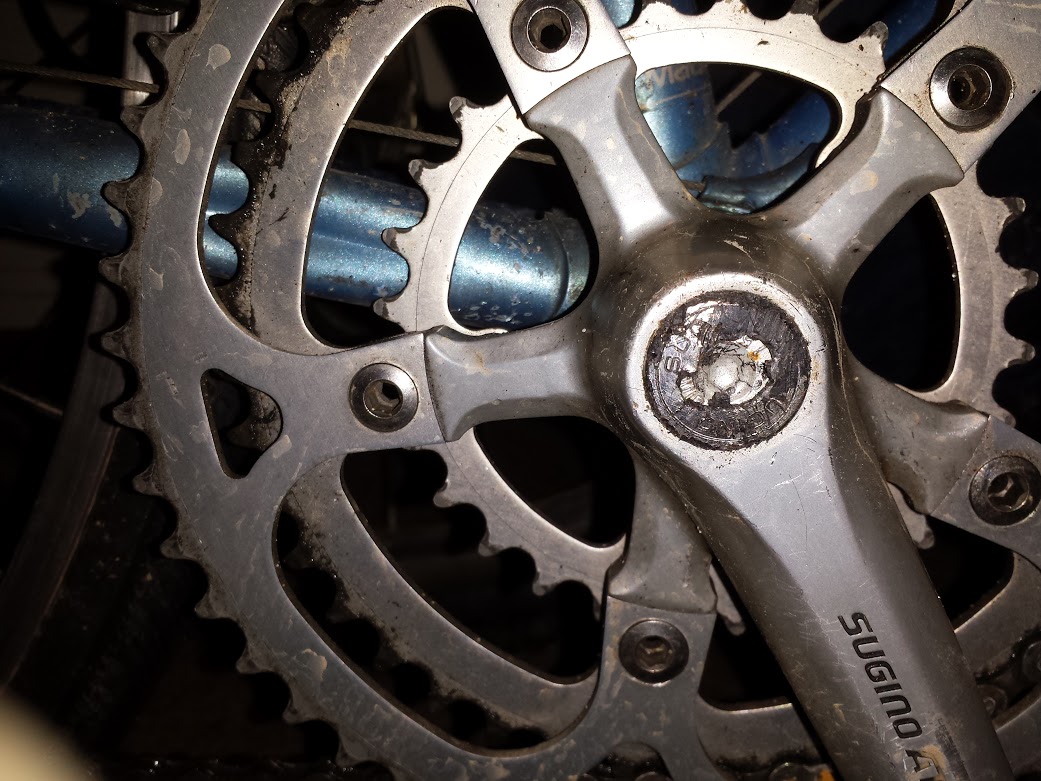 That hole in the middle is supposed to be slot for a screwdriver, and I can't get it off. Whenever I put enough force piece to move it (it's been cross-threaded) the metal deforms - it even feels soft.

Could someone please tell me how to get this thing off?

At the stage you're at I normally vandalise them out. Get a big flat head screwdriver and use it more like a chisel - wedge the flat under the parts I can see and break them off, trying to break the part that has the thread on it at the same time. Plastic caps usually shatter while I'm doing that and all the bits fall out.

If not I remove the bottom bracket bolt or nut now it's exposed so I have better access, then I get a knife and shave away the plastic until that remaining threaded ring falls apart. With aluminium that will be harder but is usually still doable.

One alternative that I usually try early on is to cut a groove across the ring (parallel to the BB axis) and try using the screwdriver to turn the ring using that.

So far that hasn't failed for me, so I have no idea what to do next. I'd probably use a dremel or a drill to try cutting that ring.

(I've done this quite a lot, I've been a bike mechanic. But 90% of the "stuck" ones shatter when levered open as described, leaving you picking out loose pieces.)

That's a plastic dust cap. Best bet is to use a dremel to cut a new slot.

Cut the slot to try to unscrew it as normal. After you try that, if it is really stuck or you make the problem worse, you can dig it out, pick it out, or whatever it takes. But don't use any hard steel tool as you might damage the thread in the crank

Upside is that since it is plastic you'll be able to dig it out.

A simple solution - get a hot soldering iron and melt two slots, one on each side, then wedge/rotate the two parts out with a pointy pair of pliers.

Not the answer you're looking for? Browse other questions tagged maintenance repair or ask your own question.

8
How do I get rid of this clicking sound in the back wheel?
5
Adivce on what to do next with crunching / slipping gears
1
How to Get Starter Pins
2
How do I re-attach a crank that has fallen off?
1
Chain falls to the outside of the chainring, but I can't reproduce the problem
2
Dahon Folding bike, seat came right off!
1
SR Suntour CR9 suspension cartridge removal
3
How to assemble this headset?
5
Can this bent (after crash) rigid steel fork get repaired?
1
Can't get bike valve caps off