All the shifting was working smoothly until my bike fell off to the ground (edit1: to my right side hitting the right side of the bike) with me couple days back. Now after about a week when I took my bike for a ride I found that the rear shifter doesn't work as intended.

The problem is when I push the lever (rear) to shift to a smaller gear (larger cog), the lever doesn't come back to the neutral position, thus I have to manually pull it back to the neutral position. When I push the lever, it sort of gets stuck there. So when I want to shift to higher gears I have to push the lever then take it back and then push it again and so on and so forth. Shifting to higher gears works perfectly and generally there's no problem with indexing or any other tunning thing, only thing is the lever getting stuck. Can't be a problem with cable either.

Front shifting working as usual. Today I opened the case just to see if I can find the reason for the issue by visual inspection but I can't identify anything to fix (have attached a pic after removing the rear shifter case).

Any help towards fixing this is highly appreciated!

EDIT2: some other pics of the rear derailler (just for you to see if it's bent or not)

EDIT3 (closure): First I tried losing the cable tension to see if the lever is still stiff and it was. Which made it clear that the problem is with the shifter and not with the cable. And then I removed the back cover of the shifter and voila! it started working. But it gets stuck when I fully screw the nut in with the back cover. So I just screw it in to the extent that the lever is working and left it there. 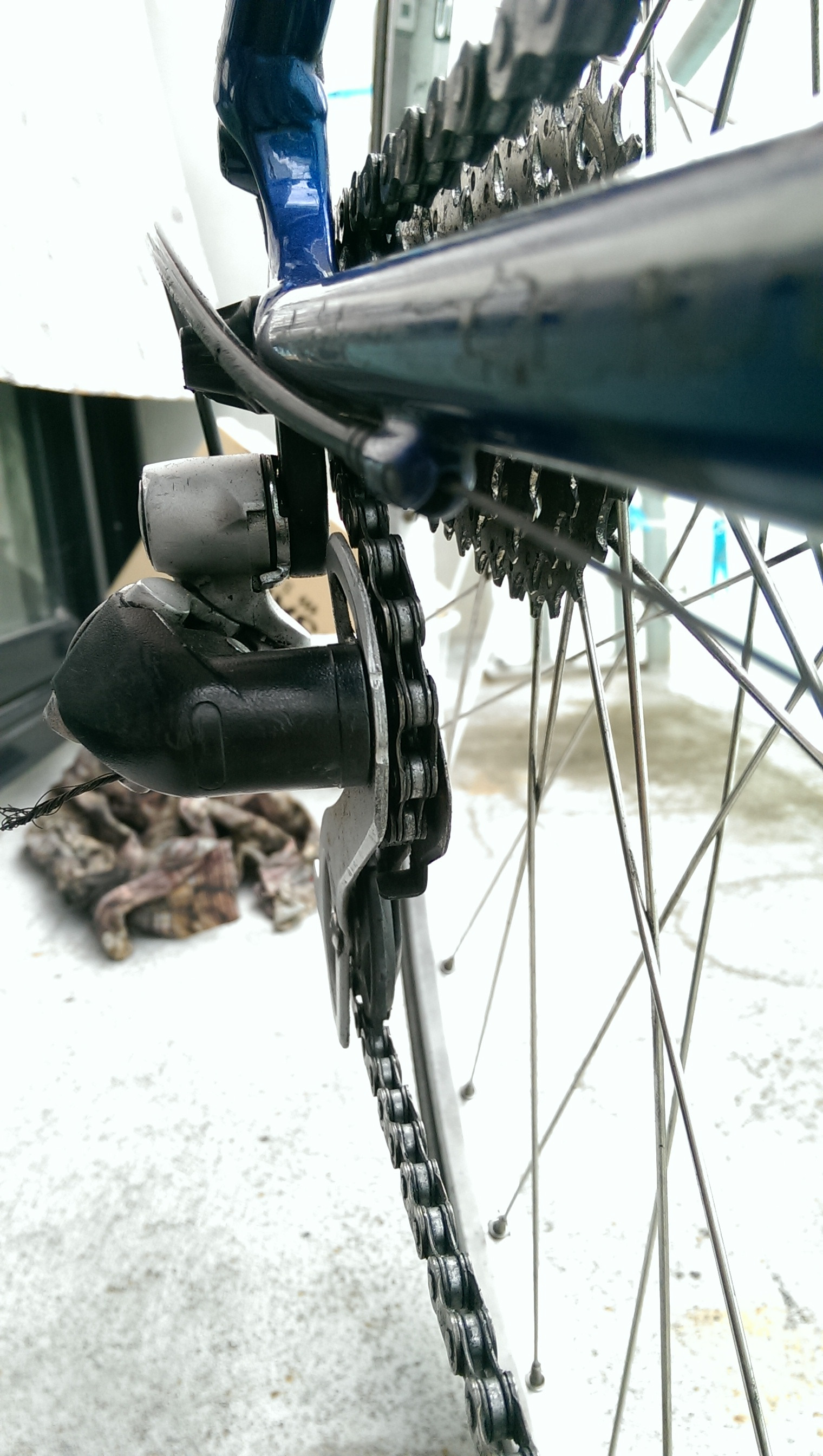 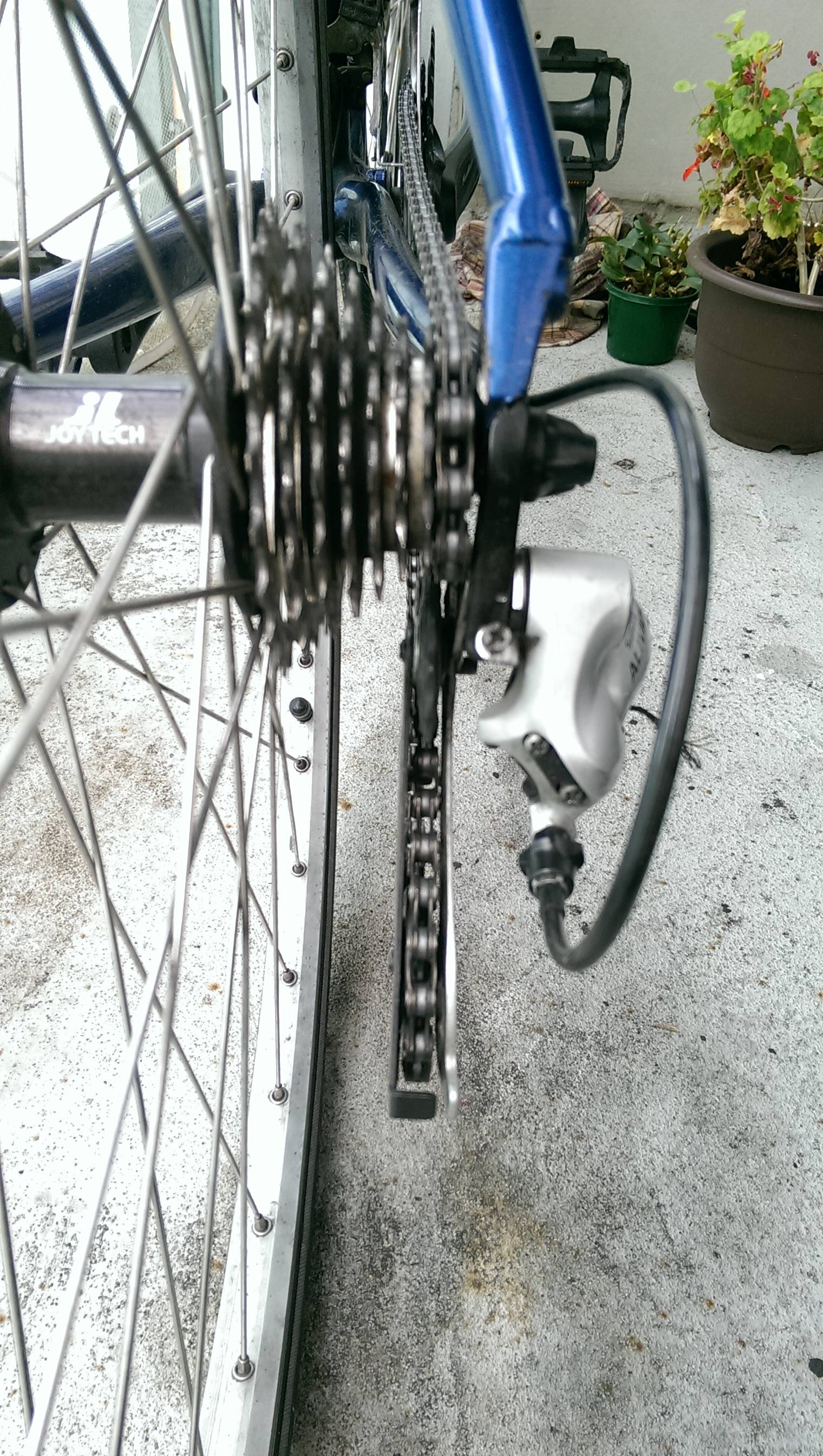 This is not easy to solve without actually having the bike to play with. It's also something I'd do fairly quickly so I'm trying to give a detailed explanation of something I've learned to do from experience rather than written instructions. I've built my own bikes, worked for a year as a mechanic, and ridden rather a lot on a variety of different bikes. I'm also regularly wrong and still learning. So...

Modern derailleur systems have a lot of things that have to be adjusted fairly accurately for them to work properly. Unfortunately some of the tests that a mechanic will do are destructive, in that they will usually cut the gear cable and replace it. Generally speaking for anything more complex than tweaking the barrel adjuster they will replace the cable and outer, because those are often the problem and they're cheap. In other words, paying $5 or $10 for a new cable+outer will often save $20 or more of mechanics time.

The other thing is that a cheap shifter like yours is only about $20 to replace, so often a shop will just put a new one on and not bother trying to fix it.

Leave the cover off the shifter (as it is in the photo), everything should still work. If you lost that cover in the crash, buy a new shifter (or replace the cover if you can somehow find a matching one). The missing cover isn't a problem in a nice clean shed, but on the road the shifter will fill up with water and muck and stop working fairly soon.

Any of these steps might fix the problem, but in order this is what I'd do:

It sounds as though the last step is likely to fail. If so all you can do is poke around in the shifter more aggressively, trying to dislodge anything loose, maybe put a bit more oil in there to looses the grease and see if that helps.

I'm sorry this is so non-specific, but in my experience the "generally poke it and lube it" approach works about half the time, and the rest of the time the problem is a damaged part that can't be replaced because no-one sells parts for cheap shifters. In the shop I worked at we had a box of old shifters for times like this and if the customer couldn't afford a new one we'd try to find a second hand one. But that saves $10 on a bill that's already got over $50 in labour costs on it.

thanks all for your answers but I'll just write it what I did for fixing it (actually nothing! :)):

First I tried losing the cable tension to see if the lever is still stiff and it was. Which made it clear that the problem is with the shifter and not with the cable. And then I removed the back cover of the shifter and voila! it started working. But it gets stuck when I fully screw the nut in with the back cover. Possibly when I fully screw the nut in, cover is rubbing the lever or something which hinders the lever functionality. So I just screw it in to the extent that the lever is working and just left it there.

It's likely the cable and not the shifter.

I have Shimano Rapidfire shifters, and I've dropped my commuter bike a few times--both with and without me. More than once I thought I had a shifter problem, but when the LBS looked at it the problem was the cable. Cables take a real beating with an index shifter as opposed to a friction shifter. Being a year round commuter, I have my shifter cables replaced every two years.

It is sometimes said that if you talk to three different bike mechanics about anything that you are likely to get at least four answers. However, in talking with mechanics, I've found they tend to bet on the cable as the problem.

Not the answer you're looking for? Browse other questions tagged shimano gears shifter mechanical or ask your own question.