The trail will be built in a forest. So there's no rocks, just dirt, small stones and a lot of roots. What else will I need to build a good forest trail?

It depends a lot on the ambition of the trail and the local conditions. Are you trimming branches in a forest or creating a safe path down a rock face?

Other dirt-working tools will probably be helpful, a pick and wheelbarrow are the obvious ones I can think of. Knowlege of how to safely prune trees and plants, plus some knowlege of trail construction, and some skill at dealing with people might be handy (I'm not sure whether skills count as tools in the same way knowlege does).

Consumables like tree repair paint and gravel will be useful and possibly necessary.

If you have significant embankments you can definitely move concrete embankment bracing segments by hand, but a motor vehicle would make that easier. If you're using concrete a trowel would be good. If you're driving stakes a sledgehammer is essential (and if you're not, what holds your anti-erosion material in place?)

The limited MTB trail making I have done has all just required a spade, hammer and supply of pegs (I have used a small axe for the latter two but it's not a good idea). Stuff that I could carry on my bike, in other words.

So far most of what have been suggested are handtools... some planning and design tools are important as well.

I spent the last three winters designing and building an 8-mile-long mountain bike trail with a specialist from IMBA--and this book is a really great resource.

The tools that I used the most while doing trail layout were a CLINOMETER and ROLLS AND ROLLS OF FLAGGING. Ideally, to minimize erosion, you will want to keep your trail grades under 12% with short, steep pitches minimized. Even after spending months in the woods with a clino, I still sometimes look at a grade and guess it wrong--usually too steep. Always double-check with the clino.

When we were laying out the Paradise Royale trail, at King Range National Conservation Area, we used several colors of flagging--one to denote the downhill side of the trail-to-be, one to denote access points or GPS waypoints, and another to denote specific trees that needed to be removed, etc. I think we went through at least five cases of flagging while laying out that trail.

In the King Range, one could not utilize flagging without creating sight-lines... so we often used small saws and lopping shears for that. Get the sight-lines open so that you can actually use the clino.

Get some good-quality topo maps of the area where you are building as well as a GPS with topo map background display. These made finding our way between cliff faces, water features and old logging roads possible despite dense foliage.

During our sessions crashing through the forest, we found two-way-radios to be quite valuable. These were especially important during the scouting phase. "What's it look like where you are right now?" "It's a tangle of brush and rocks." "Looks like that here, too--what's your side-slope?" "Like 80%" "Okay, lets meet back at the creek crossing and rethink this..."

It all depends on how intense the terrain and foliage are where you will be working... but you get the picture.

I am posting this as a separate answer because it is so different from my commentary on planning and design...

We don't like to think of people as tools. Usually only law enforcement types think of regulations as tools... but think of both of these as well.

I have worked for four different land management agencies in the U.S. and have built or maintained hundreds of miles of trails. User-defined trails on public lands are often a headache--and although we often do not catch the trail-builder, the trails are often quickly dismantled.

Know who the important players are. Is it a U.S. Forest Service forestry technician at the local office? Is it the director of parks and recreation for a county park? Know who these people are and start talking with them early. Even if they have no plans to build a mountain bike trail where you want one... if it is on their land, you will need to work with them.

In my experience, I have had groups approach me with interest in a trail where we had no interest in building one. Sometimes it works out. If there are no other issues--endangered species, riparian habitat, watershed issues, ownership patterns, etc--sometimes these trails get built. It can take some time to get buy-in... but if there is community support it usually only takes a little tenacity and negotiation to get into trail-building mode. Often on public lands, the trail will get built as an "agency project" with you providing all of the "volunteer" labor... but it does happen.

Also, be prepared to at some point realize that sometimes "no" is the answer. If you have a great spot that you want to build a trail across public land but you come to learn that it is the only hillside in the world where the limestone salamander lives... is the extirpation of a species something we should risk for a recreation trail? True, sometimes minor environmental concerns are used by agencies as stalling techniques... but get to know the players and soon you will learn which issues are important and which can be "mitigated."

Know the players and know the rules. Understand that if you are planning to build a mountain bike trail through a designated wilderness area in the U.S. that the answer will always be "no" and that it is out of the hands of local officials. "Wilderness" with a capital "W" is enacted by the U.S. Congress and cannot be changed through negotiaion with anyone save congressional aides. Bicycle travel is not permitted in wilderness areas by congressional decree (1963).

There are, of course, a lot of players and a lot of rules. I have just given a few examples here... but knowledge of your LOCAL issues, players, and regulations, may be the most important TOOLS IN YOUR TOOLCHEST.

You have the basic tools. I would add a pickaxe, and a standard garden hoe. The pickaxe can be used to carve out the side of inclines that need to have single track cut in. The hoe is useful for pulling loose dirt and rocks out of the way.

It addition to hand tools I would add a string trimmer, or brush cutter. Sometimes grass and undergrowth has to be cleared before you can lay the path. A trimmer makes this much easier. If this is going to be a remote area or you do not want to use motorized tools, bring pruning sheers and a scythe.

You also need work gloves, water, a first aid kit and other things to take care of the workers making the trail.

I have never done any trail building but If I was building trails I would defiantly by a Bob trailer. It should fit through single track. It is weighted for 70 lbs. Costs about $410 Canadian. 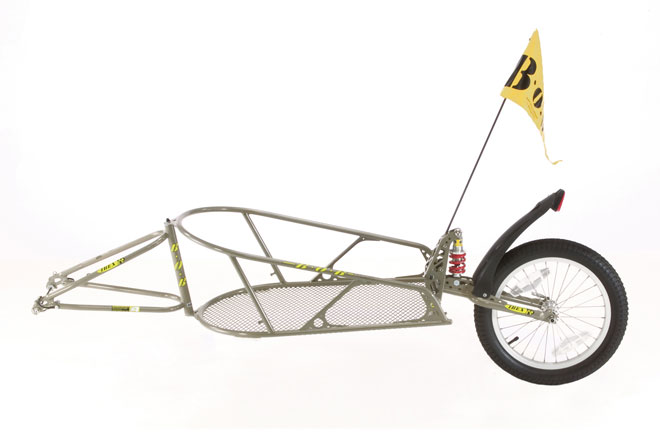 Lots of great answers already. Every area is different, but if I were building a trail in my locale I would want rudimentary rope kit. That said ropes can be dangerous and the internet isn't the place to learn to use them. That said I would bring a harness, belay/repel devices, rope, anchors and a mechanical advantage system. This stuff will let you safely move around, delimb and build heaviers bridges than you can lift by hand.

Not the answer you're looking for? Browse other questions tagged tools off-road diy trails or ask your own question.

7
New, cheap mountain bike: What's most likely to break?
5
Mountain bike rain coat / jacket (packable, not for winter)
8
What tools are required to replace a spoke?
10
Turtles on Trails
3
What type of terrain makes an MTB mandatory?
4
Road bike assembly - required tools
3
Wheel building - ever encountered nipples that are screwdriver-only?
0
Which type of frame for slopestyle?
11
Should I avoid hard-packed crusher dust trails with my hybrid?