What is the best way to secure a bike on a bus bike rack?

This question involved a bicycle stolen off the front of a San Francisco muni bus. Up to now, I never thought much about how vulnerable my steed is on a bus.

What is the best way to secure a bicycle on the front of a bus? Ideally it should not involve too much time to secure the bike or remove it, given that the driver and other passengers are waiting for you. 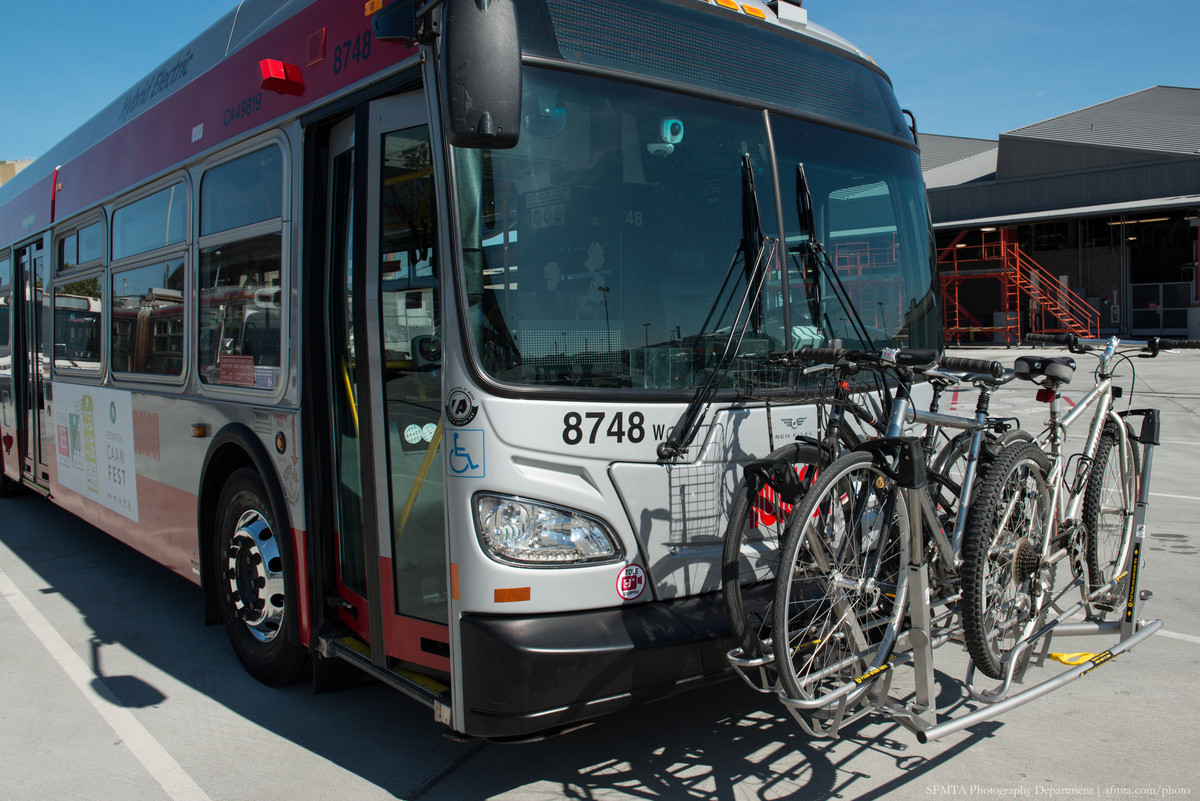 Put your lock through the wheel so the bike isn't rideable. It's harder to run carrying a bike than not, making it easier to catch the thief. Sure, they may break or bend a spoke if they try to jump on and pedal away, but if they do try that they'll come to an abrupt halt and be much easier to catch. The other advantage of that is that other cyclists can easily move your bike to remove theirs. You can also lock the bike before the bus arrives, speeding up the loading process.

Adding your own tie-down to the bike may be enough, since whoever steals it has to discover and remove that as well, giving you more time to get out and grab them. I suggest using it as the lock above - wrap an ocky strap through a wheel and the frame, hooking one end where you can get to it easily, then when the bike is on the rack attach that end to the rack. That way it's fast and easy for you while the bus is waiting, but slow and annoying for someone trying to steal your bike.

I use locking QR skewers on my bike, so I can lock my wheel to the rack and the wheel is already locked to the bike. But that takes time, and can mean I have to unlock and remove my bike in order for someone else to get their bike off, then I have to put my bike back on and re-lock it. I only do this at night or when it's a long trip, and after I've asked the driver. Usually they say yes, and often shuffle bikes so mine is on the bus side of the rack and won't need to be moved. I've had a driver wake me at my stop when we arrived because I was exhausted and had gone to sleep on the hour-ish bus ride. I made a note of that driver's name and rang the bus company to tell them how great the driver was, because Australia doesn't do tipping and positive feedback is rare enough that it's likely to count.

You could use a cable lock looped through the rack, and that's one of the few places a cable lock might actually work - the bus driver isn't likely to stop while someone cuts the lock off... unless they stop specifically so someone can because you're not supposed to lock your bike to the rack. But without locking the wheels to the bike it's usually difficult to lock the bike to the rack with a D lock.

Put your bike closest to the bus rather than on the outside edge - be less accessible?

Remove the seat and take it inside the bus with you - less interesting.

Try and sit at the front of the bus to keep an eye on your bike.

If you own a folder bike, take it inside the bus with you rather than use the rack?

I suspect you may not be "permitted" to use a lock to the carrying rack, so put a cable lock through your bike's wheels but still allows it to be carried, just not ridden or wheeled.

Finally, go without the bus - can you ride the bike instead of the bus ?

Not the answer you're looking for? Browse other questions tagged lock security transportation or ask your own question.

5
How to handle an attempted bike theft

49
Best type of bike lock (materials, style, etc.)
7
What's the most secure type of bike lock that costs less than $30?
16
What is the best bicycle lock on the market?
8
what is the most secure bicycle combination lock?
4
How popular is the "Sold Secure" certification among reasonable-quality lock makers?
1
Public Transportation Bike Rack Size
0
What is the correct kind of hitch receiver that works with my bike rack?
11
If you can only secure one wheel when locking bike which wheel is better