Preface: I am going to start building out new bike for myself and decided to put disk brakes on my new bmx build as an additional challenge. I am old school and prefer brakes on front as well, it seems like it is hard to find ubrake mount pegs on new forks.

Issue: Trying to figure out how to mount rotor on to hub. Also, disk brake mounting adapters seem like something that could be machined if I can't find one, do not want to weld anything on to the frame. I found one rear hub (http://www.trueprecisioncomponents.com/tpc-products/pro-rear-hub-disc/) that has mounting for rotor. I was wondering what are the options I have these days for mounting rotors on BMX hubs? Also looking to do same for front wheel hub as well. Any suggestions?

I am mostly interested in aspects of rotor installation / mounting on to the hub it self, i am looking at 14mm axil hubs. Are there adapters that i can plump on the hub it self? For example if i would buy http://www.federalbikes.com/parts/freecoaster-v3/ what could i do? Or more specifically these: http://unitedbikeco.com/products/supreme-female-front-hub http://unitedbikeco.com/products/supreme-female-freecoaster-hub

On the other hand may be i can just adopt MTB front hub, like this one: http://www.wheelbuilder.com/white-industires-xmr-iso-front-disc-brake-hub.html And then purchase bmx specific rear hub, http://www.trueprecisioncomponents.com/tpc-products/pro-rear-hub-disc/ that already has rotor mount point?

If your problem is just that you're heavy, remember that things have changed significantly in the last 10 years. Bike manufacturing has taken up new materials and technologies now, so we have high-strength alloys (of steel as well as aluminium) and a lot of parts are stronger or lighter than they used to be. It's likely that 14mm 10 years ago is no stronger than 12mm now.

What you could easily do is a custom frame using MTB through axles and disk mounts with matching MTB hubs (singlespeed hubs, of course) laced into 406 wheels. It might end up being a $US2000 BMX, but it could definitely be done (I build my own bikes as a hobby because I end up in this position - what I want isn't on the market, so I build it myself). It would be cheaper if you could buy a trials bike with disks, but that might not be strong enough for you.

Disk hubs are very common and available in a variety of hub/axle sizes, as well as being fairly straightforward to make if you have a CNC milling machine (so many machine shops will be able do it for you). The question then becomes how much you're willing to pay. Unusual sizes and combinations are likely to be more expensive.

Custom framebuilders make and sell disk caliper mounts to be welded or brazed on, they're not expensive and buying some will save you a bit of hassle. But I suggest getting one that includes the dropout to simplify alignment and position.

14mm hubs with disk brakes are something I don't think I've seen, 14mm strikes me as more a flatland thing for people putting huge loads on the axle-mounted foot pegs rather than being needed for the actual wheel. So you may never find a disk+footpeg hub. Is 12mm an option? I'm pretty sure I've seen 12mm axle hubs with disks. Sites like BikeRadar have opinions that might help you decide what's worth looking for

Also, I don't think you'll find bolt-on adapters to do what you want. I'm not sure they could even be made as the forces are quite large by bicycle standards and things have to be made specifically to deal with them. I suggest looking at trials bikes because they use small frames, 406 wheels and disks for the most part. You could almost certainly get a 406 size front fork and fit that to your frame, for example, but you'd likely end up spending more money that way than just tweaking a trials bike for BMX.

I wouldn't put disk brakes on any fork that isn't designed to carry the loads.

This looks like a cheap steel bike, folded rather than snapping. 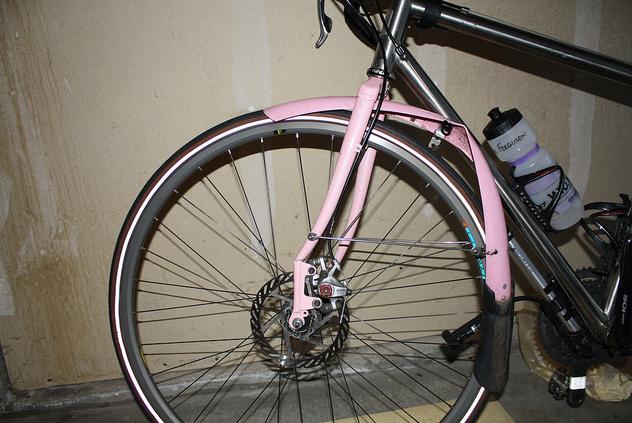 This one looks like an alloy fork because its grey but has snapped not bent. 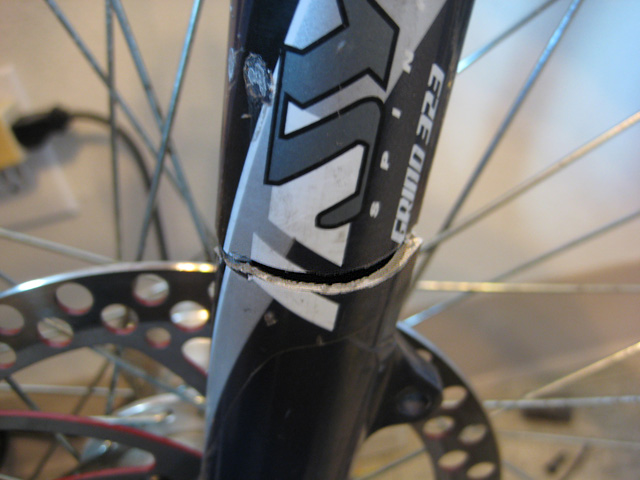 Finally here's one based on carbon with all the daggy fibres hanging out. 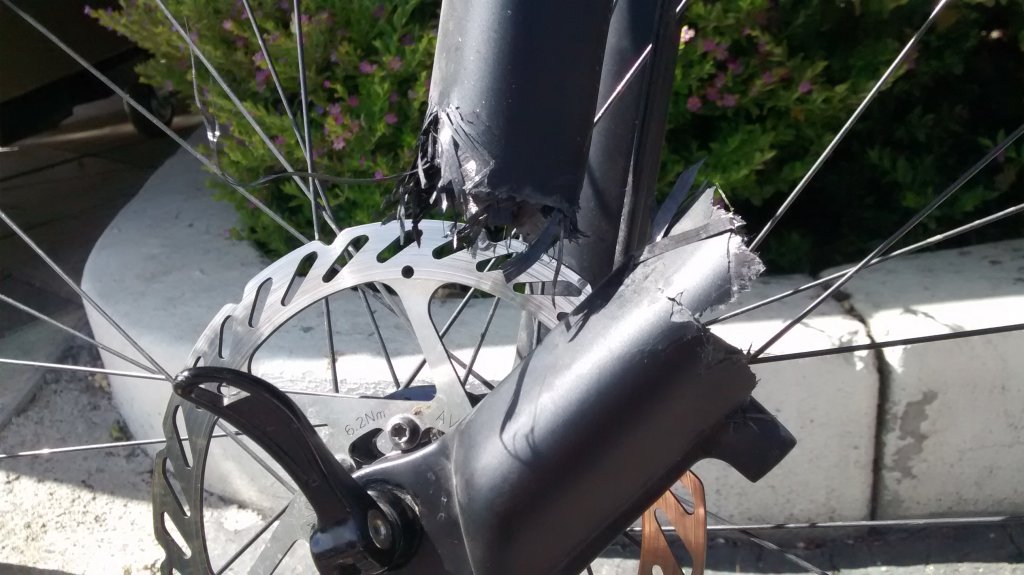 If you're mechanically inclined, either reinforce the front forks, or get one that's made from something stronger than these three. Also consider putting the caliper on the front-side of the fork rather than the backside. This exposes the caliper to more road junk and to damage, but it means the braking force drives the axle upwards, not downwards out of the dropouts.

Not the answer you're looking for? Browse other questions tagged disc-brake bmx or ask your own question.

1
Are the rear brake mounts on my Boardman Team HT post-mount or IS?
2
Disk brakes severely reduced in power after replacing bearings
7
Can I use a Center Lock hub and disc brake rotor in place of an ISO hub?
2
Disc brakes on leader doberman which has no tabs and adaptors
3
Disk brake rotor feels loose
8
Where should the brake calipers grasp the rotor?
5
Disc brake adapter too close to rotor
1
Retrofitting disc brakes on 2000 Specialized Stumpjumper FSR XC?
9
I know I am missing a rotor but I don't know what to attach it to