Which front and rear lights can run while charging?

I have a 52V battery pack on my krampus, which I use for commuting to work. I plan on buying a DC-DC converter with two USB outputs to run headlight and taillight. So my requirements are mostly to be seen, with flash and bright enough for city nights. Any recommendations are very appreciated since documentation doesn't include the ability to light WHILE charging. It might turn out that I am forced to go with a dynamo style system substituting my battery pack and the converter for the Dynamo hub. ps. On a budget.

Update: thanks for all the help everyone. I decided to avoid the step-down dc/dc converter and go with purchasing these...

***update 2: I improved things further with this new link; A bit expensive but the optical quality is high with sharp cut off. Perfect solution for direct-pack lighting.

USB rechargeable lights are not typically designed to be run off of USB power continuously, they're only designed to be charged over USB. I run The Bike Light Database, and have tested dozens of different USB rechargeable lights. A few models will run while plugged in, but typically do not charge if turned on, and only run at the lowest output setting.

If you're already going to be getting a DC-DC converter, you would be better off getting a headlight that runs directly off of DC power. It'll be cheaper than getting a battery-powered light which you don't intend to use the battery of, and probably more reliable.

There are hundreds of options for super cheap (both in cost and quality) bike headlights which run on 8.4 V. You can probably find one without a battery pack, or if you do buy one with a battery pack make sure to recycle the batteries because they tend to be unsafe and low quality. You could also look into higher quality lights which use an external power source; many different manufacturers sell them and they pretty much all take a 2.5x5mm DC barrel plug at a nominal 8.4 V. The Fenix BT20 is a good example of one such light. 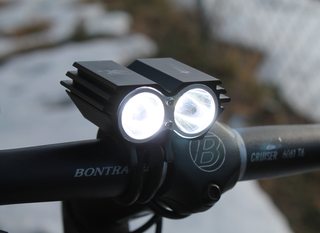 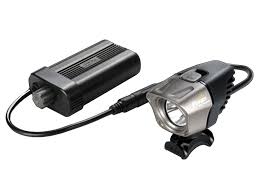 It's going to be harder with taillights. I don't know of any taillights which operate when plugged in to USB, and I also don't know of any affordable taillights designed to run off of an external power supply. Your best bet might be to look for a taillight meant for vehicle usage and get a DC-DC converter which will put out 12 V. Trailer lights can be gotten for cheap online, or if you wanted something more visibility-oriented you could get a light like the type found on tow trucks and emergency vehicles. I did that using a 12V battery pack and a TIR3 light I got online and wired up: 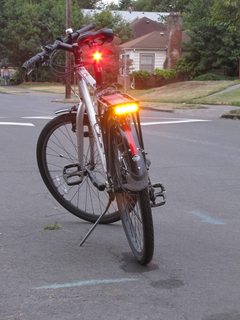 I suspect that the OP and I have a common goal: to have a really dependable permanent lighting system for a commuting/touring bike that will run at high output levels for very long time periods. Since he has electrified his bike, he already has a large central battery source. For a non-electrified bike, the expensive, ultimate solution is a generator hub system charging a central battery. Although the lights for these systems are good, they are limited in choice. The thought of supplying external battery power to one of the excellent new high output rear lights (like the Cygolite Hotshots, Nightrider Solas, or Bontrager Flare) is very appealing. NHinkle - your previous response indicates that they can't be fooled into extended run time by supplying power to their USB charging terminals while in use even when the internal batteries are fully charged. (I'm guessing this is because their maximum current drain exceeds the capacity of the charging circuits?) Are the internals accessible in any of these such that the charging circuit could be bypassed and appropriate voltage external power run directly from the USB terminal to the battery terminals (with internal batteries removed)? This could give extended full power run time while retaining the advantages of the overall packaging, switch, modes, lens, and mounting system.

Here is an answer: I just bought the Cygolite Hotshot Pro 150. I took it out of the box, played with it a while and then put it on a "5v 1A" (5 Watt) USB power source to charge. I also turned it on to the highest steady mode. Five and a half hours later it hadn't heated up much, still was shining brightly, and still wasn't fully charged. According to the box it came in, a full charge should have only powered it in that mode for two hours. The box also indicated that normal charge time is five hours. Without talking to the engineer who designed it, there are a number of unknowns, some of which are potentially dangerous. (Did I mention that I did this test INSIDE a cold oven for safety?) It isn't clear if it was charging at all, or just powering the light directly from the USB power port. (This seems unlikely.) Assuming that the unit was still charging slowly, there would come a time when the internal battery would be fully charged - but would the charging system detect that and shut down, or be confused by the current drain of the light - perhaps dangerously so? At the very least I would expect the usable battery life to be decreased. Following my experiment, I will purchase a USB battery bank to use with it on long bicycle tours, but I will only run and charge simultaneously in emergencies - not as a regular thing. Experiment at your own risk.

Read these quotes from batteryuniversity.com: "A portable device should be turned off during charge. This allows the battery to reach the set voltage threshold and current saturation point unhindered. A parasitic load confuses the charger by depressing the battery voltage and preventing the current in the saturation stage to drop low enough by drawing a leakage current. A battery may be fully charged, but the prevailing conditions will prompt a continued charge, causing stress."

"Lithium-ion operates safely within the designated operating voltages; however, the battery becomes unstable if inadvertently charged to a higher than specified voltage. Prolonged charging above 4.30V on a Li-ion designed for 4.20V/cell will plate metallic lithium on the anode. The cathode material becomes an oxidizing agent, loses stability and produces carbon dioxide (CO2). The cell pressure rises and if the charge is allowed to continue, the current interrupt device (CID) responsible for cell safety disconnects at 1,000–1,380kPa (145–200psi). Should the pressure rise further, the safety membrane on some Li-ion bursts open at about 3,450kPa (500psi) and the cell might eventually vent with flame."

Not the answer you're looking for? Browse other questions tagged commuter lighting led-lights electric-bike or ask your own question.

7
Where to find a good bicycle-trailer lighting system...in Canada
7
What are the advantages of a building an electric bike from a kit vs. prebuilt
7
Bottle dynamo wiring a headlight and taillight on 1980s bike
3
Kalkhoff Agattu (e-bike) Panasonic 24v engine dead - worth repairing?
2
LED headlight eating away at power output of USB charger
7
Bosch battery stopped charging
5
Can I charge an ebike from another ebike battery?
4
How do you repair or lengthen a B&M Luxos Control Cable?
2
Why are there no/very-few bicycle-specific lights with replaceable 18650 Li-Ion batteries?