Advantages of mounting bottle under frame

I'm wondering if there are any advantages to mounting ones water-bottle on the bottom of the down tube, near the ground, versus on top of the tube.

I'm mainly interested in the advantages, or lack thereof, in the context of a road riding.

It seems like if you are riding a mountain bike or riding off-road, it could protect your frame from stumps, branches, or anything else that you could land on that is taller than the bottom of your down tube. Also, I could see it helping to keep the center of gravity of the bike as low as possible, for mountain and road.

Are there any other advantages to mounting a bottle on the bottom of the down tube on a road bike?

The main advantage is that it gives you an extra water bottle. Being lower down means that if you are swinging the bike from side to side it has less effect - this isn't about the 1kg being part of the total 100kg rolling mass, it's 1kg on a 10kg bike when you're out of the saddle on a climb.

Tourists often spend considerable effort on carrying water, because very now and then they ride somewhere with limited water availability (I live in Australia, that problem is more common here than in many other places). When your bike is already loaded for the rest of the tour, being able to add an extra bottle or two on the frame rather than balanced on top of the rear panniers is very helpful.

The same applies to longer road training rides, but I suspect it's a less common issue. When I did longer rides in NZ and water was plentiful, I still often used the extra cage to free up another cage for a toolkit.

That location also doesn't interfere with frame bags or shoulder carrying the bike. If you're bikepacking or touring offroad that can be useful.

This also works for bikes that have rear suspension and the frame doesn't allow a seat tube mounted bidon. Or for that matter, if you have a low top tube or a small frame that has the same restriction. In both cases this will be your second and probably final bidon.

Note that there are a lot of possible mounting positions, this diagram has the ones I've seen people use (I don't recall seeing anyone use all of them on the same bike, though): 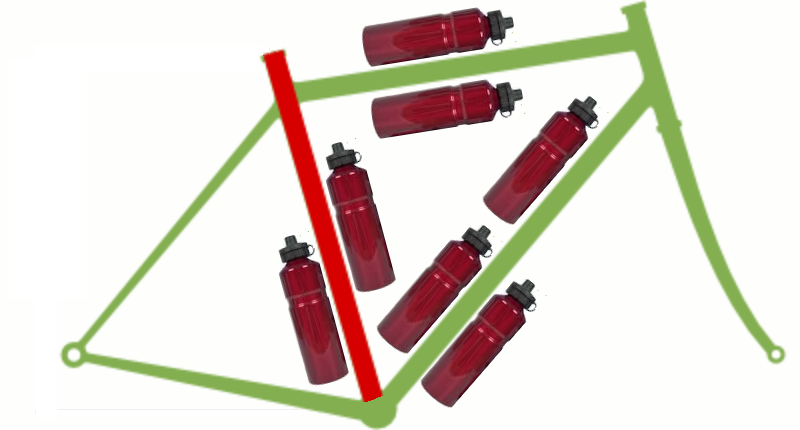 That bottom cage is right in the path of muck from the front wheel, so it will get filthy if the road is damp, and even in dry conditions the top fills with dust and gunk. On anything over an hour I find covering the top with a plastic bag helps keep the bottle usable. It's hard to access while riding, so that doesn't really hurt.

Note that this is normally the fifth or sixth bottle position on a bike, but it's often the third and final set of bidons. Why touring bikes don't have bidons on the top tube escapes me (my DIY bikes do), and with longer wheelbase bikes a set behind the seat tube is often useful as well.

Other? I would not count protection as the first. The cage is a lever and some edges. A water bottle is not exactly an impact attenuator. And you have the chain ring to get past.

You pretty much only see a third on touring bikes. It is the least convenient location but it is a third location. Three bottles or a frame bag and one bottle. Pretty much impossible to access while riding. Typically don't have the clearance in the bottom position for a long bottle.

Someone commented on pull downwards. Notice I used solid loop cage below.

I give center of gravity zero points.

On a mountain due to a small triangle it is typically the second cage so naturally it is going to be more common on mountain. Still the least functional position. On a mountain bike you can shake out a water bottle. I tried it on my mountain and gave up.

My best use of the last position is margaritas on Critical Mass. You give up volume to insulated containers. That is a large frame and that is 70lb dog. 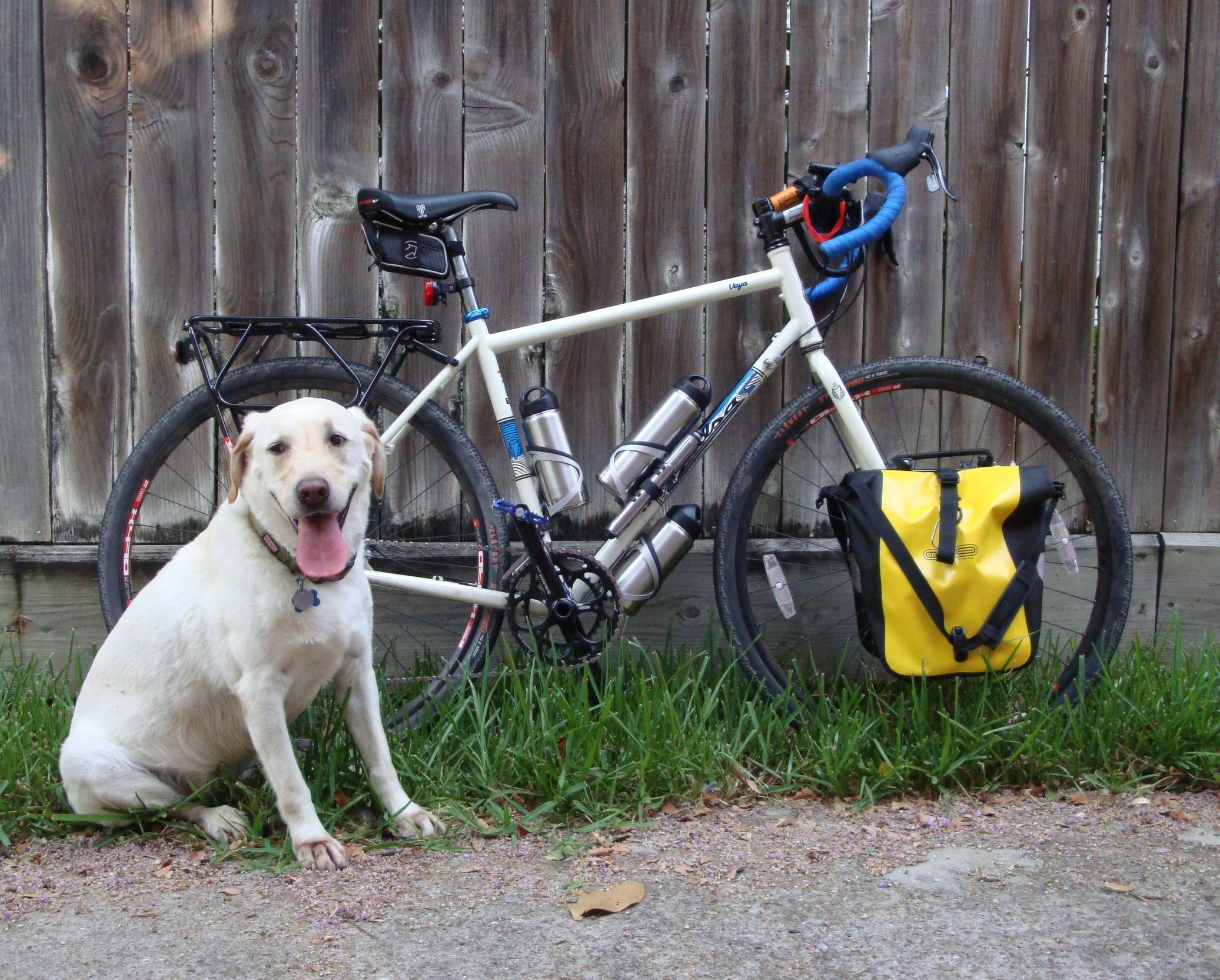 Sometimes I carry a fuel bottle down there when touring. It is out of the way and if the bottle happens to leak it doesn't cause much trouble – certainly not like having a leaking bottle of white gas in a pannier…

I've just come across a pic showing an excellent use of the under-belly bottle cage. 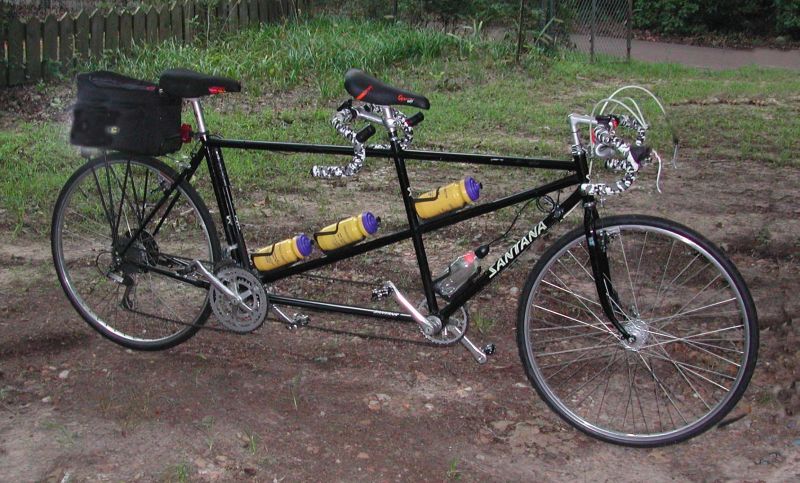 OK its not actually underneath the frame, but that is an air pressure vessel which powers an air-horn like the Air Zound http://www.airzound.co.uk/

You only need to access the air tank to refill it when stopped, else it can just hang there out of the way but still near the front of the bike.

No real Centre of Mass advantage because a bottle of air is not heavy. 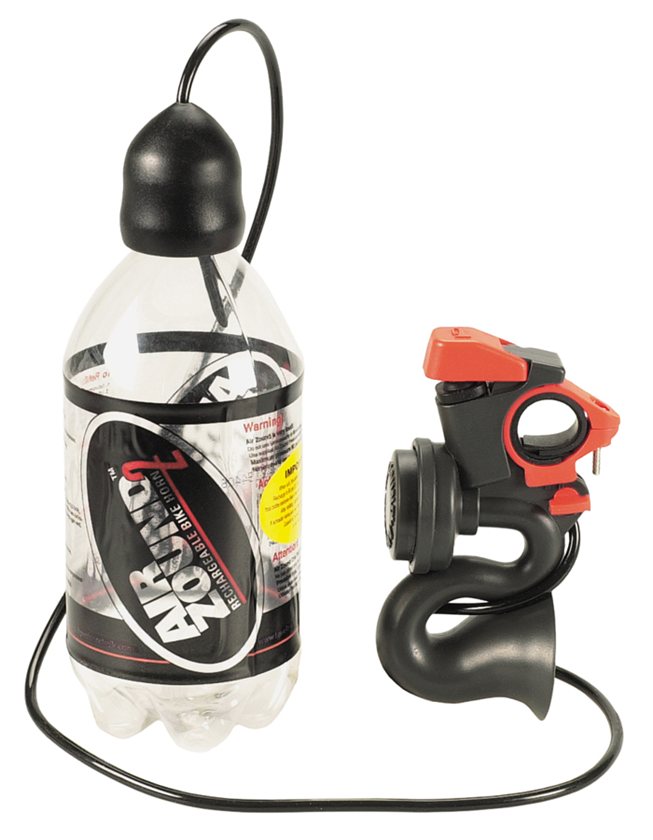 Not the answer you're looking for? Browse other questions tagged mountain-bike road-bike frames or ask your own question.

25
I keep breaking my road frames - why?
6
Why aren't sportive' 'bikes popular outside the UK?
7
What should a big guy look for when buying a road bike?
1
What are the practical limitations of a road bike compared to a mountain bike?
2
650b for small rider?
5
How to mount a compact pump onto a full-suspension frame?
4
What exactly is a "trials" bike?
6
Can road disc calipers be mounted on a mountain bike?
5
Dent in titanium MTB frame, is the frame OK to ride?