Rather than resort to radical gears such as a very small granny chainring (such as 20T) and a very large rear cog (40T), both of which can cause some problems for derailleurs as well as other problems (such as chain tension issues), why don't they just have more reasonable gears and have a 2 speed internal hub gear to basically give you 2 ranges of however many speeds you have?

For example, suppose you have a 2x10 setup but the lowest gear is nowhere near low enough for steep hill climbs. Perhaps it is 20 gear inches. Instead of tweaking the cassette for a lower gear, it would be nice if there was an internal hub gear that would reduce everything by 50%. Then your new lowest gear would be 10 gear inches which would let you climb just about anything (at very low speed) but the point is then you wouldn't have to use the lowest gear cuz everything would be lower and you could select the proper gear (perhaps 3rd for 4th gear for example).

The closest to that is the Sachs DD3 "dual drive" hubs that are a 3 speed IGH with a standard cassette mount, available in 8,9 or 10 speed cassette versions. According to this site the ratios in the hub are 0.73,1,1.36 giving 1.86 between high and low gears. That's wider than a double chainring setup but narrower than most triples (a 20/30/40T triple has a ratio of 2.0 for example).

Those apparently weigh less than a triple crank and derailleur, but since you want that as well as a double or triple you will be adding the weight, as well as the cost and complexity rather than substituting it. Sheldon Brown has done this with the older 3x7 version and seemed to enjoy it.

The issue is the size or complexity of the shifts. Rather than just having two overlapping gears from two chainrings, you now have 6 or 9 overlapping gears in much of the range (so there's lots of ways to get a given gear ratio). When shifting from high to low in the hub you either experience a big jump in final ratio or have to shift significantly on your other levers at the same time. If you went from, say, hub low on the 15T cog on the cassette to hug high, you'd probably want to shift to about 25T cog so the jump was a normal step between gears. Typically that will be three or four cogs.

The Schlumpf Mountain Drive gives a 2.5x gear down in the bottom bracket but I'm not sure they're still manufactured. I've used one of those and found it effective but the jump in gears was huge. It was more like shifting between low ratio and normal in a 4WD vehicle than a normal bicycle gear change. Typically I'd go from bottom gear on the derailleur system to the smallest cog on the cassette when I changed, but often the bike would almost come to a halt when i did that because I was going up a hill and not pedalling hard for the 2-5 second gear change cost me all my momentum. I fear that a similar shift in the rear hub would have the same effect.

If you really want that wide a ratio, the widest ratio chainset combined with the widest ratio cassette commercially available would get you very close. There are crank sets that can take chain rings from 22 to 50 teeth (finding a front derailleur that could do this range might be hard), and an 11-40 cassette. Cross-chaining would be a bad thing given how much the rear derailleur would have to tak eup.. This works out to just less than 9:1. (The components I've linked probably aren't compatible with each other but demonstrate what's possible).

That fact that this is possible but bikes aren't sold with it probably gives you your answer.

Sheldon Brown did try putting a hub gear on a bike with front and rear derailleurs to get a 63 speed bike, 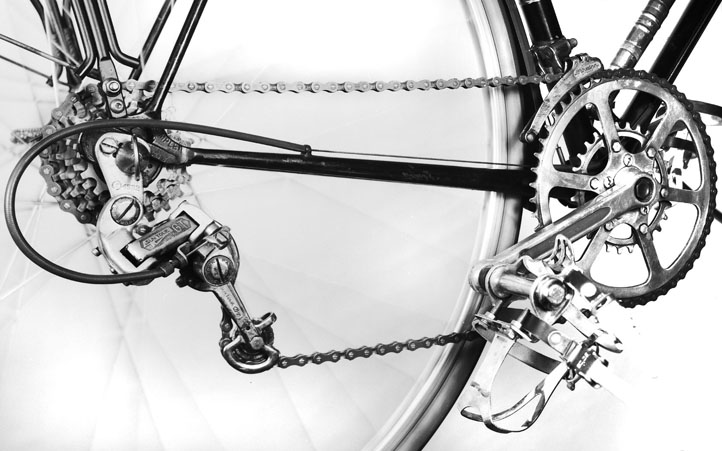 Sheldon Brown's OTB showing a 51 and 26 tooth chainring. There's a 7 speed freewheel and a 3 speed sturmey archer IGH there too, and his final version had a triple on the front for 63 gears (3*7*3)

There are 2 stage BB gearboxes from Schlumpf.

Gear change happens by pressing the middle of the crank with your heel, one side for up and the other side for down. Note there is only one chainring, but it turns at a different speed to the crank arm when in gear.

Recently taken over by Haberstock in Germany, their web site is
http://www.haberstock-mobility.com/index.php/products.html

60
What are the pros and cons of internal gears?
3
Chain coming off with internal hub gear bike - why?
5
How do I change the granny gear on a cheap Walmart mountain bike?
3
Shimano 3 Speed Internal Hub Gear on child bike popping chain on 3rd speed
1
Converting a derailleur to internal gear hub