Why is a steady cadence so important? Or is it?

I read somewhere that steady cadence is a good thing but why is that? It is analogous to running long distance where it is a good idea to set a reasonable pace and stick to it? I would think that varying your cadence would give your muscles a chance to rest some. I question whether the original claim is actually true. I would think it would be more efficient to accelerate briskly then coast down, then repeat.

This "sawtooth" cadence question is interesting because with a car or motorcycle, you actually get better gas mileage if you accelerate briskly and then just coast down. For example, you are at a red light in pole position (first). The light then turns green. You then accelerate quickly up to the speed limit (say 50 MPH) and then let the car/motorcycle coast down to maybe 20 MPH and then repeat. This is actually more efficient (you will use less gasoline) than if you accelerated slowly and maintained the 50 mph. This has already been confirmed by many people that have tested it. It is also easy to confirm yourself, especially if you have a real time mileage display. It will be at maybe 10 MPG for a brief time while you accelerate then vary between 99 and and some lower number as you coast down.

Ok now to bikes. It seems to make sense that for a bike a similar thing should happen. Imagine a person pedaling an average bicycle 10 MPH on level ground with no wind. The amount of energy expended by the rider depends on several factors including what gear they are in. Imagine they are in the proper gear vs. much too tall (high) a gear vs. much too short (low) a gear. Problem is in the low gear energy is being wasting pedaling faster than is needed (for example 150 cadence). This is a "subpoint" I am trying to make related to the main point of "sawtooth" cadence I am working up to.

If I pedal 10 miles at 10 MPH at near constant cadence, that will be 1 hour straight on pedaling. How can my muscles ever get a rest? Compare that to pedaling up to 20 MPH quickly (briskly) and then coasting down to 3 MPH and then repeating. Here I use my muscles for a quick burst then spend most of my time coasting. Here my muscles get a good rest and the number of actual crank rotations is far less. 10 miles on my bike in my favorite middle gear (34/20=1.7) with my 26" diameter tires would require about 4500 crank turns. I suspect using the sawtooth cadence method would require far less, possible only 1/3rd or about 1500. It would be an interesting test to have someone make the trip using both techniques and report their level on fatigue afterwards.

Someone mentioned about pedaling then coasting a lot will make me look like a kid on a BMX bike. Well kids are generally lazy. Maybe they figured out it is easier to pedal and coast so that is why they do it.

Another analogy is at my workplace. Can I get more work done if I work hard but take several breaks or if I just work straight thru without breaks but I get more tired that way? For me, I need the breaks to stay productive.

Maybe for younger riders a steady cadence is better but I am wondering for the 50+ crowd if sawtooth is actually better. I suspect it is.

This is really a pretty complex question. Without knowing where you read about "steady cadence being a good thing" or what the author meant it is hard to evaluate this statement, but this SE.bicycles answer presents data showing that riders don't ride at a steady cadence. Rather, they alter their cadence according to conditions of the ride, the level of power they wish to put out, and the choice of gearing they have available. So your initial premise may not be correct.

That said, assuming you are on a constant gradient, with consistent wind, trying to go as fast as possible over a fixed distance, then you want power to be constant, because constant power application is the fastest way from point A to B in those conditions. If power is constant, then cadence will also be constant, unless you are shifting. Most humans can maintain the same power over a fairly wide variety of cadence, even if it doesn't feel as good. Usually it is fine to self select what cadence you want. It may be the case that you prefer a different cadence when climbing vs on the flats. If that is so, do not feel that you have to shift to keep cadence the same as the terrain changes.

The second part of your question presents a scenario of alternate pedaling and coasting, and posits that since it may be more economical for automobiles to do so perhaps it will be so for human powered cycling as well. However, humans are not like internal combustion engines -- we have two different metabolic pathways to generate power, which are colloquially called "aerobic" and "anaerobic." Aerobic metabolic production of ATP via the Krebs cycle is relatively efficient, but when we need to produce power that exceeds our aerobic capacity we switch to "anaerobic" production that is sustainable for far shorter periods of time. Compounding this "supply of power" issue is the "demand for power". The demand equations for cycling power are well understood if not well known, but the aerodynamic component of drag varies with the square of airspeed so the power demanded varies roughly with the cube of speed in calm conditions. These two physical constraints mean both that cycling faster and then coasting requires more energy than cycling steadily at the average pace, and also that speeding up is more physiologically taxing. That is, 1 minute of high power followed by 1 minute of recovery is still more taxing than 2 minutes at the average power, even though the total joules of work performed is the same. This is the basis for why "high-intensity" interval workouts lasting X minutes can have a greater training effect but be much less enjoyable than the same X minutes steadily spent at the average power.

As it happens, here is a plot based on data from a segment of a ride where the rider alternately pedaled and then coasted. This segment of the ride was done on a flat road, with almost no wind. The upper panel shows cadence; the middle panel shows speed; and the bottom panel shows power. 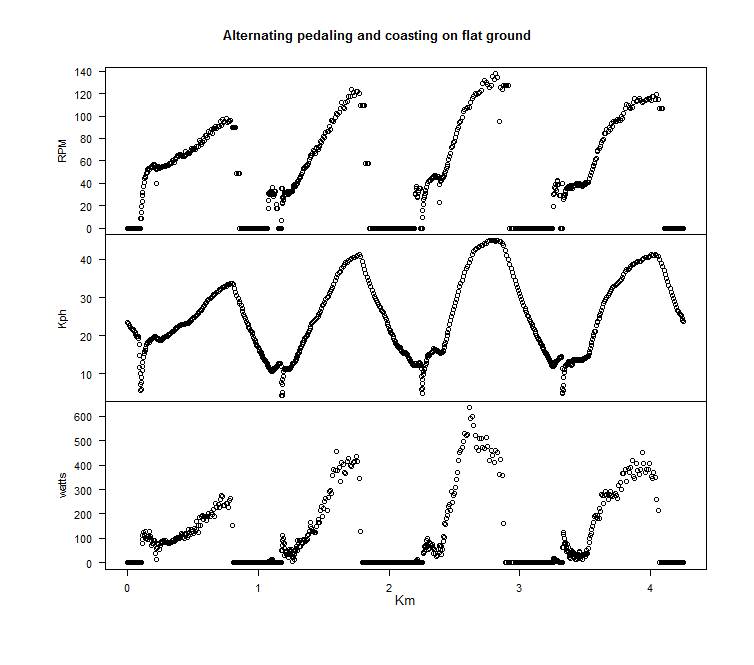 The "sawtooth" in cadence and power are apparent, and you can see speed increase and then slowly decrease. For this roughly 4 km long segment using this particular pattern of pedaling and coasting, power averaged 100 watts. If, on the other hand, the rider had covered this same flat 4 km long segment at constant speed so that the distance and total elapsed time were the same, the power would only have needed to have been 70 watts, a savings of 30%.

In this case, the bicycle used was a geared bike, so had the rider changed gearing he could have produced the required 70 watts with many different combinations of cadence and pedal force. In other words, steady cadence need not have been used. This is an illustration that cadence isn't terribly consequential, and you have wide latitude to ride at whatever cadence you want to meet the purposes you wish to achieve. If you enjoy pedaling and coasting, there nothing wrong with that.

Another theory that does not seem to be adopted by the bicycle community.

Individual racers and race teams go with a steady cadence and output.

If you have two riders trying dump a third the 2 riders will take turns bursting and falling back. Eventually the 3rd rider cannot keep up with the burst and is left. If bursting was as (or more) efficient than a steady pace this would not work. This works even with the 3rd rider not taking lead - they are drafting.

As for muscle fatigue. Fatigue is the force - not cadence. Drop a gear so it is easier to spin. It is well establish that a human body is more efficient at delivering power in a fairly narrow cadence range.

David - how does it feel to you when you're on your bike and try doing exactly that?

Biomechanically, you'll be stressing your muscles to a higher peak level, and then a brief respite. I imagine your overall power output will be lower over a reasonable distance.

If you pedal fast then coast for a bit then pedal then coast - I think you'll look like a teenager on a kid's BMX, and your average speed will be pretty slow. Partially this is because they're seriously under-geared for their teenage power, and partially its a lack of endurance to maintain those cadences for longer periods.

Answer Get on your bike and ride!

It is far more efficient to cycle at a steady cadence suitable for the terrain and gearing used. In fact this attempt to maintain cadence and maximise efficiency is the reason bikes have gears.

Varying the cadence is going to put stress and strain on your muscles, joints and cardio vascular system. This could be your aim (with the exception of stressing your joints) as this is what you would do with interval training, however it would not be usual for a normal ride where you want to get from A to B the most efficiently.

I would also imagine gear changes would be be carried out with strange loads on them, either too much when cadence is high, or too low when the cadence is down. This could stress the mechanical components of the bike too.

Not the answer you're looking for? Browse other questions tagged cadence or ask your own question.

40
What is the optimal cadence?

8
How do you measure your cadence?
2
Multiple Bluetooth Smart sensors for bike?
0
Estimating trainer 'effort above the flat' by heart rate + cadence
15
For fitness's sake, is it better to ride with low cadence in high gear or higher cadence in medium gear?
3
Difficulty maintaining power at recommended cadence. Is recommended or preferred cadence better?
2
Cadence: Belt drives + Nexus 11 hubs
1
Pushing it to my max on a 7% 2kft climb. I'm cardio limited, but legs never hurt. How do I push it harder?
1
Is this summary for seeking an understanding of the landscape of cyclocomputers in 2020 accurate?
3
What cadence should you sprint at?