I have a Quando rear hub with a busted cap? By cap I mean the cap covering the bearings beneath the cone.

This cap is separate from the bearings. It hold the balls in place. Is it possible to replace this with a Sealed Bearing. If not, am I able to purchase just the cap or must I replace the entire hub?

I can post some pictures if this isn't descriptive enough.

Summary: buying just the dust-cap is unlikely, normally you buy new cones and often a new axle, but that's because new cones are cheap. You'd only buy a new hub if something else is damaged (rare). You won't be able to fit sealed bearings.

I the picture below from the Park site is the bearing cone and cap. I assume that's the cap you're talking about? 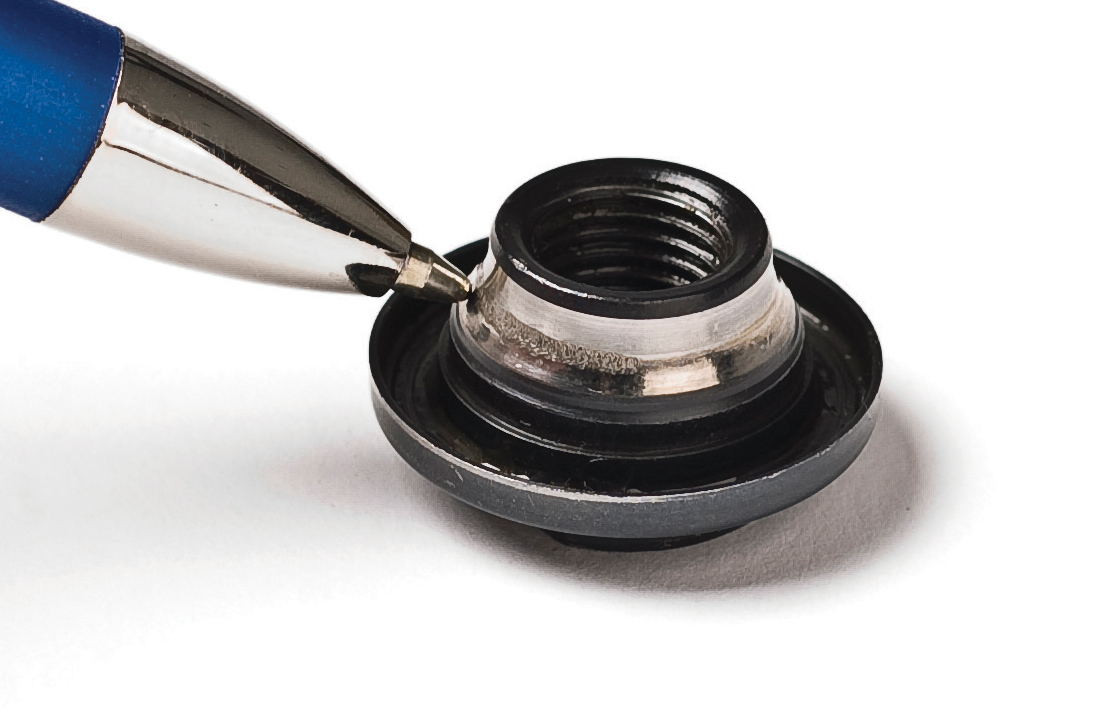 That cap is just a dust/dirt shield and you can run without it (as you possibly have been doing) but that will shorten the life of the bearings.

Normally a bike shop will replace the bearings and cones shown at the same time, leaving the cups in the hub alone (except for cleaning). Few hubs have replaceable cups. Some shops will only stock complete axles with cones as the axle is a cheap part and it's easier to have a known-good axle every time (they sometimes bend just a little, enough to wear out bearings fast but not enough to see unless you roll the axle on a dead flat surface). Other shops stock a bunch of cones separately, but have to keep them carefully arranged in pairs since you almost never replace just one cone, and it's annoying to have to sort through the pile looking for an exact match. Another reason to use axles to hold them together :)

You won't be able to put sealed bearings into a hub not designed for them, the recess that the bearings sit is is different (one has a bearing cup, the other a cylindrical recess for a sealed bearing). If you had a lathe you might be able to cut the cups out... but it'd still be cheaper to just buy a new hub. You could possible bodge in sealed bearings buy just sliding them along the axle until they hit the cups and buying the right size to fit inside the recess in the hub, but you wouldn't get much overlap there so you'd probably break the hub in short order.

I have an old RSX hub on my road bike - when servicing the bearings, the cones were found to be horribly pitted. So I tool the old cones into an LBS and asked for replacements.

They whipped out vernier calipers and measured, and found some suitable ones. One was $21 and the other was $4 NZD. To move the dust cap over, I simply used the right size of socket and a bench vise to press the dust cover off. Same method worked fine to put cap on the new cone and did not damage the race at all.

It is possible to buy/find the individual parts you are asking for. However, you need to know the exact model # of the hub. For cheap hubs, it is sometimes cheaper to buy an entire hub and then cannibalize the new one's axle and cups/cones/balls/etc... You'd do that to prevent having to re-lace the wheel.

Usually though, it is much cheaper to just trash the whole wheel and get a new one. If there is something special about the rim/hub (odd size, etc..) then you may need to start raiding the LBS's trashpile for parts.

If this is the Quando rear hub I'm seeing online, the whole hub is available for under $20... I'd just buy a new one and scavenge the parts from the new one to fix the old one and keep it around if this ever happens again.