Ask Question
Asked 11 years, 10 months ago
Modified 4 years, 8 months ago
Viewed 562 times
8
votes
Locked. This question and its answers are locked because the question is off-topic but has historical significance. It is not currently accepting new answers or interactions.

What is a good headlight for my bike?

The Dinotte series of lights is great, and I love mine. I can get almost 2 hours out of my 200L on high mode. It meets all of your requirements, except for the one about bumpy/gravel roads -- if you mean by that something durable, then it meets all your requirements. 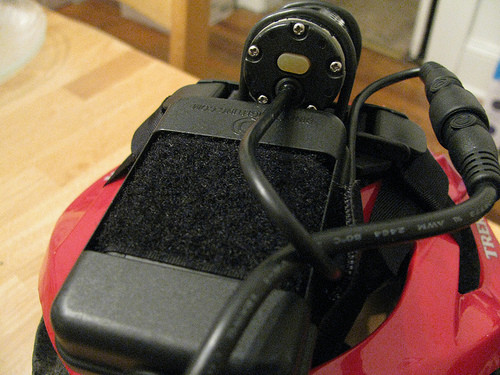 Dinotte 200L headlight and battery mounted on my helmet.

If you're just riding city streets, with street lights, you aren't going to need much in terms of illumination. More likely you will need a light that is bright enough so that The other drivers can see you. I picked up a 7-LED head lamp light from my local dollar store for $2, and mounted it to my handle bars. You can get a second one and mount it to your helmet if you like. It is plenty bright for streets that already have street lights. If you're looking for mountain biking, or for going on streets without street lights, you can save a lot of money by going to a site like deal extreme and checking out their selection. They have some lights that are so bright they are almost scary. Brighter than a car headlamp. Something like this cree light will give you a lot light. And for a really good price. Be careful about the big names. Some of their lights aren't any different (same assembly line) than the cheap stuff you find at the dollar store, but they charge 10 times more, simply because they put a name on it. For instance, this is the exact same headlamp I picked up for $2 Canadian at the dollar store, and they are charging $13 US for it.

I would go with a helmet mounted light, as this meets your swapable requirement, and if you're riding at night, you should always be wearing a helmet anyway.

As for the light itself, a name brand light from a bike or specialty manufacturer (Bontrager, Light & Motion, etc, etc) LED lamp should give you the best bang for your buck. Also don't forget a red tail light, which are often required by law. You can get some small elastic strap on ones for a few dollars.

I'm extremely happy with my Knog Gator. It was a bit pricy, but definitely worth the money. The battery lasts about 5 hours if you have the light on full power, but it has 4 different settings to make the battery last even longer. And it takes a few seconds to swop between bikes, handle-bar mounted

I recommend the Romisen "RC-2R4 II R5" LED flashlight (available from ShiningBeam.com). Its $26 + shipping and you can get two 18650 Lithium Ion batteries and a charger for another $30 + shipping from BatteryJunction.com. All told you are looking at less than $70 for 300 lumens of spot-light in a very small (think AA Mag-light size) flashlight. Each 18650 battery will last over two hours in this flashlight.

I made a little block of foam and used a small velcro strap to mount the flashlight on my helmet (seen below with a similar-sized Jet III M flashlight): 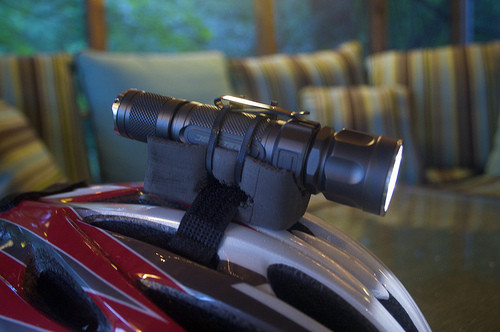 I used the Romisen light on my helmet two weeks ago combined with a 350 lumen flood light on my handle bars (Cygolite MityCross -- $175) for the 24 Hours of Great Glen mountain bike race. The combination of a spot-light on the helmet and a flood on the handlebars allowed my to ride single-track downhill at the same race-speed that I did during the day. The flood-light on the bars serves to cast shadows behind rocks and drops, giving good terrain definition for single-track racing that would be lost with just a helmet light. For dirt roads though, the Romisen spot-light on the helmet is way more than enough, throwing a large pool of light 50 yards or more ahead.

I have used the MityCross flood light alone for commuting, but it only casts a defined beam about 15 yards ahead which isn't quite enough for me to feel comfortable at road speeds.

These new LED flashlights from China (like the Romisen) are giving fabulous amounts of light and are mostly are standardized on the 18650 LiIon batteries. They provide a great value and can also be used around the house and anywhere you might want a flashlight. The big thing that bike-specific lights provide is sturdy handlebar mounts (which are harder to find for flashlights) though at a large price premium.

For your specified dirt-road use I'd suggest that a 300 lumen LED flashlight on your helmet would be more than sufficient.

I use the Light & Motion 900 as my commuter bike headlight and couldn't be happier. As mentioned in many reviews, this light comes with good side visibility which is important especially if you're riding in built up and urban areas, crossing junctions.

Not the answer you're looking for? Browse other questions tagged product-rec headlights or ask your own question.

12
Off road lights
4
Need a bright headlight for offroad, UK

31
For a long (25mile each way) commute, what kind of bike should I look at?
2
Light-weight ladies bike
3
voltage of lighting system
3
Saddle for long rail trails, streets and dirt paths
10
Pedal-powered head/tail lights
4
Light brightness indication
5
Advice for buying a new crankset for my bike
5
Do rotational-symmetric-looking front lights usually throw half their light into oncoming traffic? How To dinstiguish?