Are folding handlebars a good idea from an engineering standpoint?

A couple of Chinese stores have been selling folding handlebars: 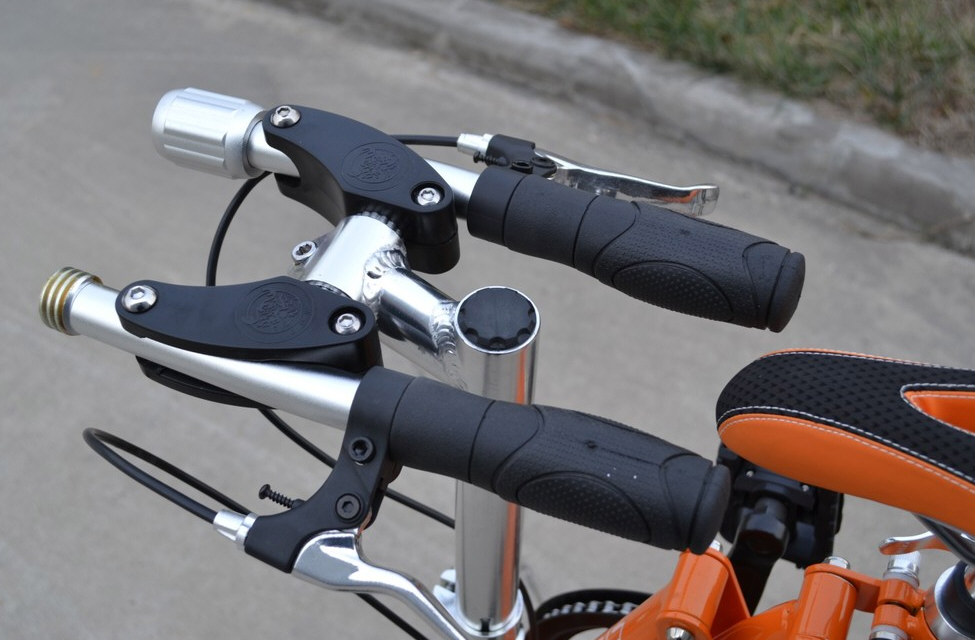 At first glance this appears to be a great idea since the handlebar width is one of the reasons that carrying and storing bikes can be a problem.

From an engineering standpoint, are these types of handlebars feasible?

Well, from an engineering standpoint, no. It increases complexity, cost and weight. Those might be a deal breaker for the commuters who would likely use them. From a practical standpoint, maybe. @NL_Derek; you could be the first to test one!

In conjunction with other folding components (frame like a Dahon & pedals), it may suit the users need, imagine putting your bike in a suitcase.

If we assume that the design criteria are such that we need a folding handlebar, nothing here jumps out at me as anything that could not be adequately addressed with quality engineering. You could say a folding bike or folding pedals appear to be very dangerous, but if they are well engineered and manufactured with quality, there is nothing inherently dangerous about them. Whether this particular item is well made, can't say. @RoboKaren, I'd agree that something other than the threaded connection between the two halves might be better unless it has some measure preventing it from loosening unexpectedly, like a cam-lock mechanism of some sort.

Just for kicks, I modeled up what in my estimation would be a sturdy hinge assembly, if made with the right materials, roughly copying the design of what is shown in the picture. I don’t have time to do a joining detail though… 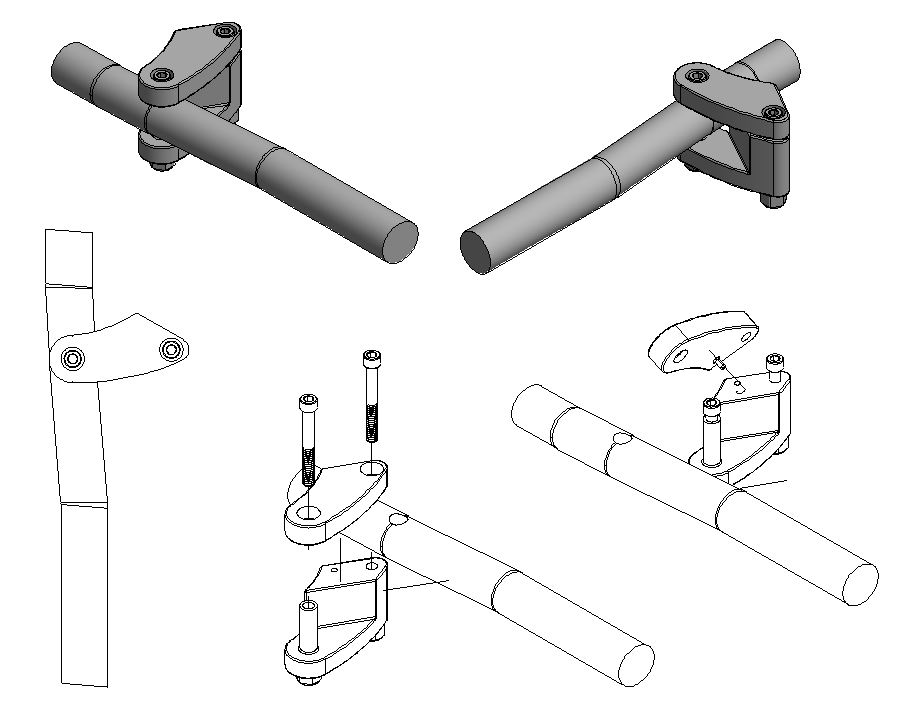 Running through a quick list of "engineering considerations" that I've just made up:

It's the sort of thing that I would happily buy if it filled a need I had, but I would also be aware of the above and take care with the folding handlebars when I got them. For my folding-bed load bike they might have worked better than the "just turn the handlebars a bit" approach I used when I parked that in a hallway. But I didn't buy a set even though I'd seen pictures of them, because I wasn't convinced that they'd work well enough to make up for the above problems.

Other posters have pointed out that it's vulnerable to catastrophic failure, so I wouldn't use it for my 60mph racer (if I had one !-). But for an everyday getting-from-A-to-B bike, it sounds like a great idea. I have often needed to loosen the handlebars to fit a disabled (flat tyre, lost key, etc.) bike into a car (using a handy stone if I don't have a hammer), this would simplify things quite a bit.
I'd need to see and feel one to assess how sturdy it really is (@DanielRHicks apparently thinks the black bits are plastic, @RoboKaren thinks they're cast metal, in any case they need to be fairly substantial).
Do you think they're going to be available in the Netherlands? If they are any good, I predict a good market!
EDIT: @renesis pointed me to the advert which makes it clear that the black is plastic (they say: "commonly used in aviation").

At first glance, these handlebars appear to be very dangerous. There are multiple points of failure any of which would immediately render the bike not only steerable but likely not allow the operator to brake either:

We spend a lot of effort to develop this type of folding handlebars. Our works have passed EN14766 mountainbike test. I wish you may try this one.

The innovative Smaller bicycle folding handlebar can effectively avoid the unpleasant nuisance of bicycle parking in a confined space. Without much effort, steps four take less than 3 seconds to fold the handlebar up or to fold it out.

Reliably, its material of aluminum alloy ensures its toughness and resistance,. Over the past years' tests of endurance and impact, Smaller's folding handlebar has took certification of EN14766 (Mountain-bike test).

Stylishly, the design of minimalistic line-up and the anodizing surface of black color make its simplicity without losing the concept of aesthetics. 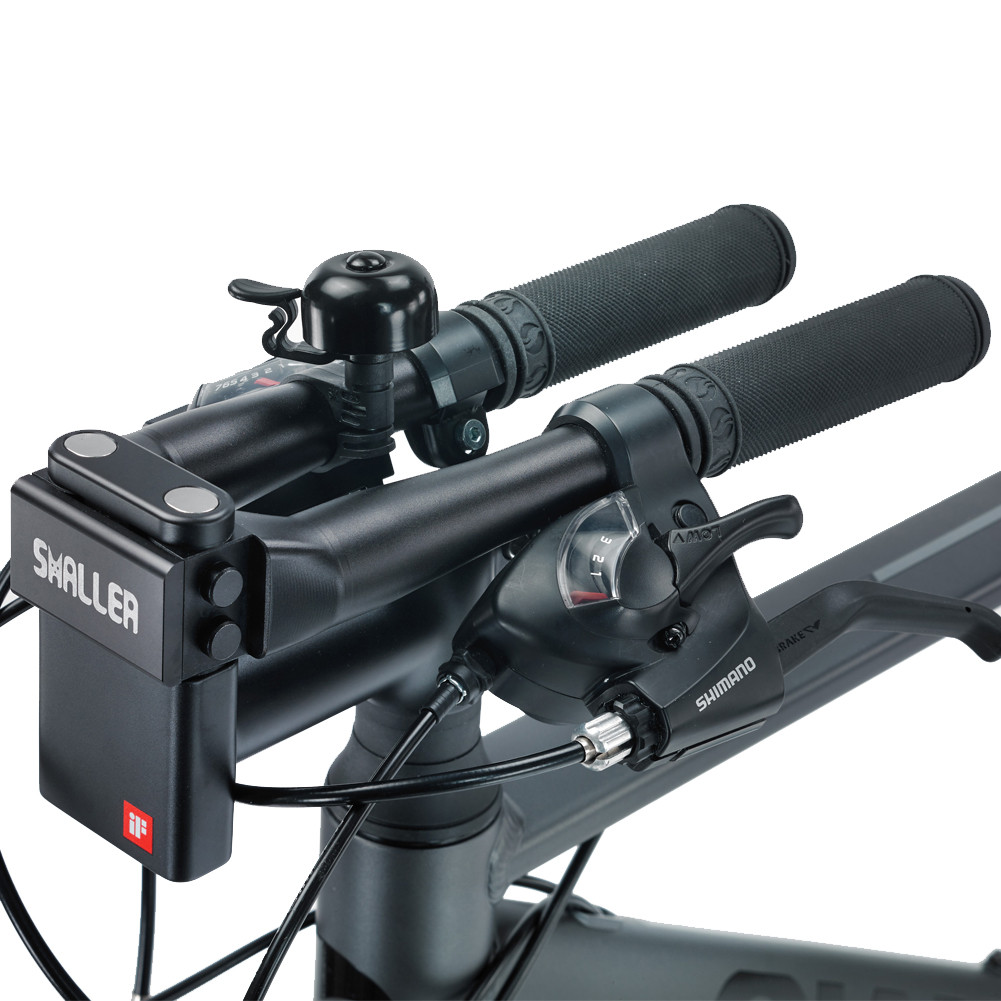 It depends on the design. I would say yes this is not that hard for someone with Engineering skills to accomplish. What I don't quite understand is why instead of having a pivot, don't they just make it with screw mounts so the ends of the handlebar can be pulled off? A safety latch could be placed on them to lock it to prevent accidentally loosening it while riding. There could also be 2 "stubs" for the handlebar ends to rest on in a vertical or near vertical position when storing or transporting. Also for times when needing to put the bike inside a car, 1 or both of the handlebar ends can be removed to take up less room and make it easier to load and unload into/from the car.

So my answer is yes if it is well designed, well constructed, and well tested. Very good idea but not for high stress bikes. Only for light duty I would say.

6
Are folding bikes less efficient than full sized bikes?
5
What are the advantages of handlebars with an integrated stem?
9
Are all folding pedals a bit... bendy?
3
Why are folding bike warranties so short?
2
Cheapest way to make 8 speed folding bike a good climber
3
Is it possible to use BMX steerer (stem+handlebars) on fork on folding bicycle?
7
Why are folding fat-tire bikes all-electric?
4
Prevent folding bike from unfolding