Is my chain too long?

I'm in the process of setting up a new drive train. When using the smaller chainring and smallest sprocket (hence least amount of utilized chain), the chain brushes up against the bottom of the derailleur.

Should I remove a link or two until this no longer happens?

Edit: from your photos, yes, the chain is too long. In the large chainring-large cog photo it looks as though the derailleur arm could be pulled forward at least one chain link, possibly two.

My preferred method of finding chain length is to focus on the largest chainring-largest cog combination. If there's just barely enough chain for that everything will work, although the small-small combo may have a lot of slack. Park have an exhaustive explanation of various methods.

Too much chain is kind of annoying, but too little can break things. Trying to shift into the large-large gear when there's not enough chain will stop your pedals, so there's a lot of force involved. Since you're going into a lower gear at that point, it often happens when you're pedalling hard. Hard enough to snap the chain in some cases. But also to snap the rear derailleur if it can't accomodate the position required, and if you're especially unlucky you might snap off the derailleur hanger as well. This breakage often throws the derailleur into your rear wheel which both breaks spokes and can dump you on the ground. 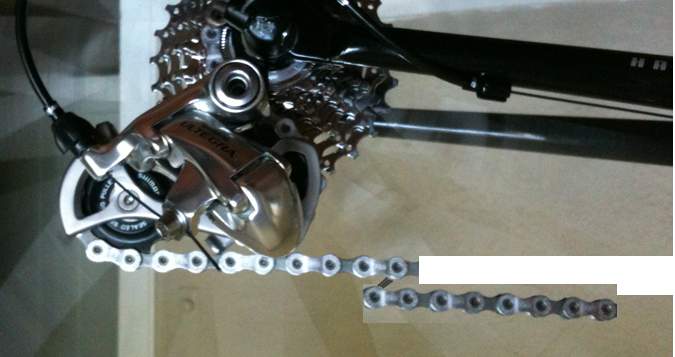 What I suggest is shifting into the large-large combo and see if there is spare chain. Try pulling a link over itself so there's a wee Z formed in the chain. If you can do that there are extra links. Keep extending the Z until the rear derailleur seems unhappy, counting links. Now remove them. Remember you do need a little slack so you can get out of the gear - you're using the return spring in the rear derailleur to pull the chain off the biggest cog, and if there's too much chain tension it won't be able to do that. But as long as you can get into the gear you won't break anything (you just need to add a link back in, and maybe pull the wheel out to release the tension).

This ties into the "some gears man was not meant to use" discussion. In cross-over gears are the large-large and small-small ones, so called because the chain crosses over from one side of the crankset to the opposite side of the cassette. This causes extra friction and chain wear, and (almost always) those gears are duplicated elsewhere so there's no need to use them. So not being able to use the small-small combo because of slack chain should not normally be a problem.

As always, Sheldon Brown has the authoritative explanation:

The best technique for setting chain length is to thread the chain onto the large/large combination, without running it through the rear derailer. Mesh the two ends on to the large chainwheel so that one complete link (one inch, -- one inner and one outer half-link) overlaps. In almost all cases, this will give the optimum length.

Start with the shortest chain that would permit connection, allowing one extra complete link as shown in the photo at the left above, so the bottom of the chain droops if you align it as in the picture at the right. Then thread the chain through the rear derailer and connect it. Turning the crank by hand, check that the chain will shift to the large-large combination using the front derailer or rear derailer, or both at once, without binding.

Work by shortening the chain, rather than lengthening it. Making the chain too short, then lengthening it is a time-waster. The narrowest chains, used with cassettes that have 10 sprockets -- sometimes 9 -- must be joined using special one-time-use replacement pins or master links. You probably only get one of these with a new chain, so it is important to get the length right on the first try.

If you are replacing just the chain (and not the sprockets or chainset) here is a tip for getting the chain length correct.

Take the old chain off and hold it up with the new chain. Compare the length and remove 2-4 links so that the the two chains are of the 'same' length.

Chains wear, that wear means the chain appears to have stretched. Sometimes this 'stretch' can be minimal, at other times it can be as much as a link, or maybe more. Should the 'stretch' amount to a link's length then you are advised to replace the sprockets too. This is because they are also likely to be worn out.

If you are in the business of fixing bikes regularly then it is useful to have two small nails in the workshop, high up and above the metal recycling bin. In that way you can hook the old and new chains onto the nails and compare lengths that bit easier. When done you can then release the old chain straight into the bin, thereby minimizing dirt/grease/oil on one's hands.

This technique works, it also saves time and reduces the likelihood of getting the chain length wrong.

9
Problem with chain skipping without trying to shift (even with new chain and gears)
5
Why rear derailer has limit on front chainring difference?
4
Replace my stock crankset and cassette for a 22-32-42t crankset and a 11-40t cassette on recumbent trike?

11
Should a link opened/closed by a chain-breaker be stiff afterwards?
4
Risks/problems of a short chain
2
Chain skip happening seemingly at random with a new chain
6
Modded folding bike and strange chain skipping on most gears
2
Chain slips/jumps occasionally (with all new parts)
19
Why should one clean a chain?
8
Gates Carbon Drive vs single-speed chain, long term lifespan and maintenance
8
Chain shortening only one link?
1
Premature chain wear GX Eagle