I am wondering why on bikes I don't see them using a pair of opposed ice cream cone shaped gears such that a fixed length belt can be moved on them to change the gear ratio. It would be cool if somehow the teeth on them could be recessed temporarily (perhaps using a cable) so that the belt could slide freely over the cones, then when the cable is released, engage the cones again. This design would not be for everyone as there would be an interruption in power transfer everytime you would shift, however the same is true on most motorcycles where you normally use the clutch to shift to another gear.

The opposed cones could each have a diameter range of 3:1 for a total gearing spread of 9:1 so that the overall gearing could go from underdrive 0.5 to an overdrive of 4.5:1. 4.5:1 would be similar to 50 tooth chainring driving an 11 tooth cog. 0.5:1 would be like a 20 tooth chainring driving a 40 tooth cog. That range should just about satisfy everyone.

So my question is has this been tried and if so, why don't I see it in current bikes? Has it been tried and it failed or is too expensive? I would think (and expect) that with today's technology, Engineers could make this concept work. It is similar to a CVT except that there wouldn't be infinitely many gears since the belt will have some thickness. The cones need not be perfect cones but could just be "ramped" for each discrete gear. For example, the cones could have 24 regions where discrete gear ratios could be engaged. The advantage here is a simple progressive 24 speed and the final drive (perhaps another belt) can be made perfectly aligned and without any tensioner.

Here is a pic of a CVT transmission but my concept is slightly different as previously explained.

Also, just to clarify, my design would be indexed for 24 discrete gears, so where the belt touches the cones would be flat, not slanted like in this picture. It would be cones with 24 flat regions basically.

I think it would be so much fun to ride a bike like this cuz as you would shift, you would have to pull a lever (like squeezing the clutch lever on a motorcycle between shifts), so it would feel a little like riding a human powered motorcycle. The fun factor would go way up and I would be willing to pay more money for it.

Also note that with 24 evenly spaced gears, the ratio between adjacent gears would be about 10% which is a nice spacing and a 9:1 overall spread would be super fun.

Here are the ratios. Format is sequential gear #, gear ratio:

If someone didn't want to shift all these gears, they could instead skip gears such as go from 7 to 9 to 11... thus making it a speed super wide ratio 12 speed (21% between gears). That would be fun too.

The indexed shifter could have 2 rings, one coarse and one fine. The course would index 2 gears at a time whereas fine would index each gear.

Someone please make this bike in my lifetime so I can try it out. It would also be cool if different cones would be offered so people could fine tune their gears such as close ratio (4:1) vs. wide ratio (9:1). On the 4:1 spread, the 24 gears could be equally spread at only 6.2% apart for very fine tuning of cadence but with a good 12.8% between "double shifts". 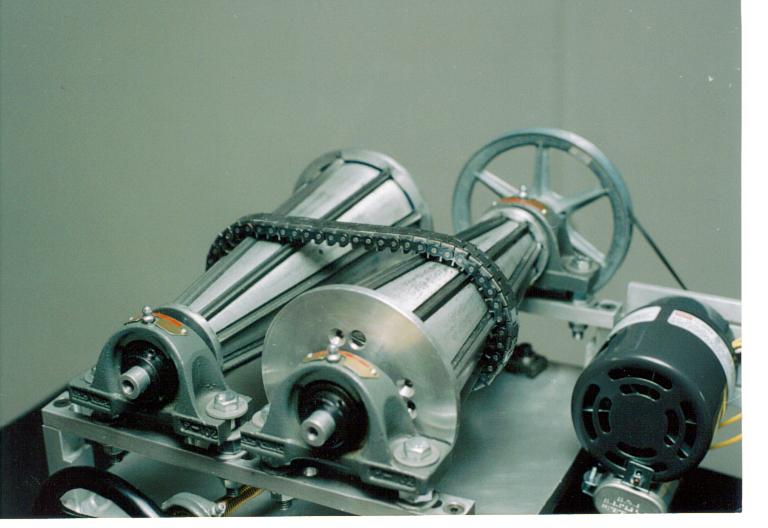 CVT transmissions using conical pulleys and a V-belt are common on mopeds, scooters, and very small engined cars. One of the advantages is in the name: a continuously variable transmission with literally an infinite combination of gear ratios. 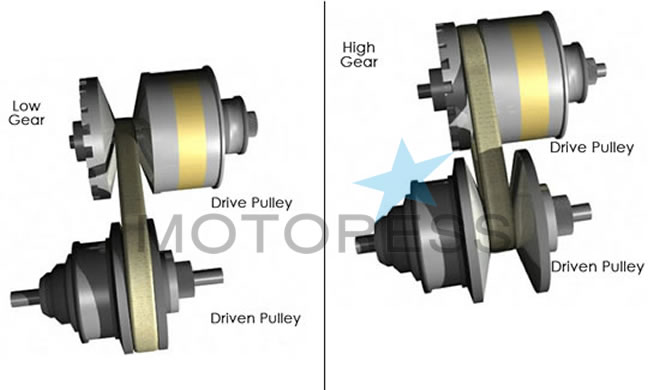 Why wouldn't you want this on a bicycle? At least the system on mopeds uses centrifugal linkages to provide the "automatic" transmission and is quite heavy and requires a relatively high RPM (much faster than most bicyclists can spin their pedals).

Furthermore, there is quite a lot of slippage caused by the v-belt especially in low gears and thus a lot of transmission power loss. For mopeds, this is actually a positive as it acts as a limited slip clutch but most bicyclists would object.

The second part of your question asks why this couldn't be done with stepped-cones. As you can tell from your photo, this would be an incredibly wide transmission. Fine for a lathe or mill (or whatever object is in the photo) but totally unsuited for most bicycles.

tl;dr: Too heavy, too complex, and too much power loss for bicycles.

Remember, people want their bicycles to be simple, lightweight, inexpensive, and reliable. You could get a higher efficiency, lighter system using a gates belt on a rohloff hub.

Not the answer you're looking for? Browse other questions tagged gears hypothetical or ask your own question.