I purchased a 50t Force 1 x-sync chainring. The SRAM install instructions say to place the hidden nut (thin item that has "teeth" on the outside that becomes "permanent" in the chainring once installed) on the hole marked "Crank here for hidden bolt". Unfortunately the chainring I have did not have this label on it so I put it in the wrong hole and only noticed later. I managed to knock it out again but it isn't really a part that is intended to be re-installed, so I want a new one.

I can't find anywhere that sells this part. I can't even find the part number in SRAM's parts catalog. Also, annoyingly, most chainrings seem to come with this nut already embedded in the chainring so this problem is not widespread (mine came in a bag along with the bolts and washers needed for the chainring). Its a super small thing - like 2 mm deep. Threaded on the inside, teeth on the outside that grip the hole edges. Seems like a terrible design because if those teeth fail the part will just spin along with the bolt and you'd never get the bolt off. There's no slot on it (like used on other chainrings) so using the special chainring bolt slot tool doesn't help.

Can anyone tell me what this part is formally called (ideally a part number), and possibly any place that will sell it? Even better - is there a superior alternative (preferable steel)? 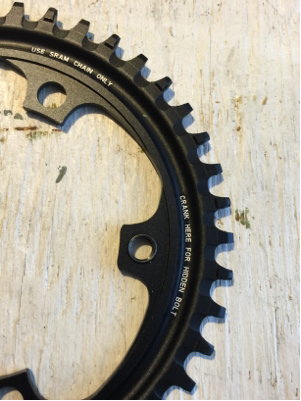 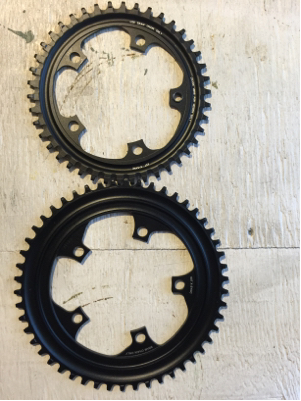 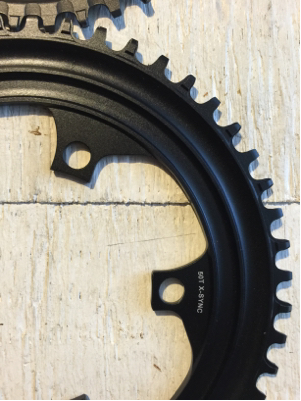 The official Sram part number is 11.6918.000.001 , those are said to work on the RED and FORCE models. That is the number for the hidden bolt set anyway. I also read that someone spoke to Quarq and they advised him to pop it out of the old ring and use it for his new ring which he also stated worked just fine, so you may save yourself $20.

Don't use that hidden nut piece of garbage. Remove the spider (3 - T25 bolts) and you have access to all of the holes. Install the chainring and then re-install the spider. A couple extra steps but much better in the long run.

Not the answer you're looking for? Browse other questions tagged chainring sram or ask your own question.

10
What is the impact of changing to a smaller chainring?
5
Replacing a chainring - what did I do wrong?
2
SLX chainring compatibility
1
Which chainring? Shimano M785
6
Are granny gear chainrings supposed to have directed teeth (i.e., be non-flippable)?
2
Chainring bolt stuck in 105 FC 5800 chainring
2
How to remove old style chainring held in by a single nut between bearing and chainring?
0
Convert SRAM Force 11 to single chainring