How do I evaluate the quality of a road bike?

I am specifically looking at a Fuji Finest Womans road bike - 51cm. I am not sure what year it is. The ad description says: 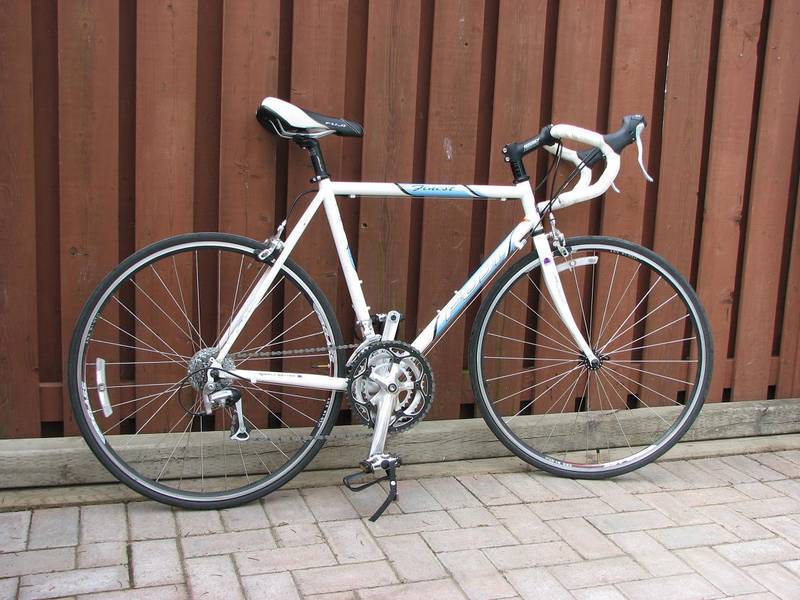 To expand Stephen's answer a little, because there are a couple of really important checks to make. What you're looking for are signs that the bike is being sold because it's not worth fixing:

Most of the last points are things you can usually fix easily and cheaply. Which means that if the seller has not done them, it could be because the problems are not cheap. Rather than new gear cables and outers, you might be looking at new shift levers (which are not cheap). I would not bother looking at chain wear because even a new chain and cassette are cheap enough that it won't matter, and expecting the seller to throw out a half-worn set just so you can have new ones is wasteful.

Also, if you're not sure it is worth while taking it to a bike shop for a check-over and quote for repairs. Offer to pay them a token amount because you're not getting the work done you just want to know what they think. If the seller doesn't want you to do this before you buy, do it immediately after. That way you can (probably) still go back for a refund.

Please don't be scared off by the list of things that might be horribly wrong. Most of us have bought second hand bikes many times and ridden them a lot. It's that 1% chance that you're getting a lemon that we're talking about, not some mythical horde of dodgy dealers.

There doesn't seem to be much of a question here, but I'll bite anyway.

Fuji makes bicycles comparable to any other large manufacturer. Your concerns when buying a used bicycle should not be about the quality of the manufacturer, but the qualities of the bicycle being purchased.

Is it in good condition? Has it been well cared for? Are there signs of obvious misuse? Does the bike fit you? Is it suited for your particular needs? Can you find a better bike for a comparable price? Can you find an equivalent bike for a cheaper price?

Unfortunately, we can't answer those questions for you, but they shouldn't be too hard to answer for yourself.

Not the answer you're looking for? Browse other questions tagged road-bike or ask your own question.

23
Optimal Maintenance Schedule
10
How do I test ride a bike that I'm looking at buying?
9
How can I evaluate a used road bike i intend to buy?

49
How do on-road mountain bike speeds translate to road bike speeds?
27
How Strong is my road bike?
10
Good Quality Road Platform Pedals?
9
How can I evaluate a used road bike i intend to buy?
6
How to evaluate used bicycle price?
3
Does price have a huge impact on the quality of road bikes?
5
Buying a bike: Older, used high-quality components or new average-quality components?
5
How to avoid the road bike physique
1
How many fingers on the brakes for a road bike?
2
First road bike, decade old quality or lower end and new?