My girlfriend recently got a new road bike. After getting it home we realized that that handlebars were quite badly bent. Here is a picture.

Here is my question. Can I try and bend the bars back into shape or should I go out and get her a new pair?

I suspect whether I can bend them back into shape will depend on what they are made out of. How can I tell this? The frame is made out of butted chromoly (according to a sticker on the bike).

Edit: Is this a warning flag about other issues on the bike? I have checked the frame over (specifically where the head tube and top tube) meet to look for crash damage but I did not find anything. Overall the frame looks good to my eyes. Should this worry me? What would cause bars to bend like this? 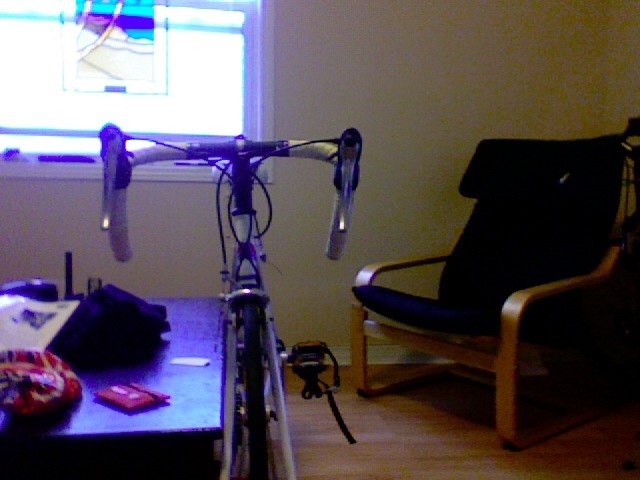 The bars could have been bent that way courtesy of a vehicle reversing into the bike. This would apply the required force without causing damage to the other parts. Alternatively, the bike could have been crashed for the STI levers and tape to somehow get off lightly.

Bending them back into shape is definitely a consideration. You need to apply an equal an opposite force to what they once received, however, in reality you will struggle to bend them back 'exactly right'.

If this was my own bike then I would put the bars in the vice and pull them back - taking care to put something soft in the vice to not have 'teeth marks' on the bar tape. I wouldn't even bother taking the bars out of the stem, in that way the bike can be used for leverage. I would spend no more than ten minutes giving it a go, and I would hope to get lucky.

Steel handlebars are hard to find, given the ch-mo frame I doubt the bars are carbon fibre rather than steel.

There is this thing called 'metal fatigue' that limits how far and how often you can bend aluminium before it breaks. There is also 'yield strength' and 'ultimate strength'. In straightening these bars out you will be working well below the limits and it is unlikely the bars will 'snap off'. Surface scratches to aluminium bars are a bigger danger to them than a 'little bit of bending', and if you really want to see the bars fail quickly, just drill a very small hole in them near the stem...!

I have actually had aluminium handlebars fail (yes I was an idiot and drilled a small hole in them, but I was 15 at the time) and that happened down a big hill. The failure was not actually completely sudden and I did not crash. I have also straightened out a lot of bikes with unorthodox means in my time and believe it is worth a go, even if the bike is not one's own.

To check the track of the bike you can wrap string around the headtube and each side of the rear axle. The downtube should be in the middle, not to one side.

Did you buy it from a shop? If so, then take the bike back and tell them to replace the bars. If you bought it used from some guy, then it might be a little harder.

I can't tell from the picture, but it's safe to assume that the bars are aluminum. I wouldn't trust aluminum that's bent that far - definitely replace them. Also, check the frame for dents and deformation - whatever it was that damaged the bars could have damaged other stuff as well.

If the bars are steel, it might be possible to bend them back safely, although difficult (steel bars are very stiff). If the bars are aluminum, throw them away. Aluminum, especially high strength aluminum, is very susceptible to metal fatigue.

Bottom line is aluminum is a metal that doesn't like to be repeatedly bent. It's more flexible than steel (which is why it's used on road bars while stiffer steel is used for track bikes) but it also fatigues faster. Those bars are pretty badly bent and it's hard to tell how much fatigue life they have left in them at this stage. You can try and bend it back but really it's better that you just replace them. A new pair of handlebars is a lot cheaper than a trip to the ER because your handlebar snapped when you hit a pothole! You can get a new handlebar for as little as $30 online and you'll need to budget another $10 for new handlebar tape. It's a pretty simple job and the most time consuming part is usually retaping the handlebars. Just be careful when tightening the bolts which clamp the brake/shift levers to the bars and also be sure to tighten the 4 stem bolts in alternating order (like lug nuts on a car wheel)

When buying a new bar be sure to get the same size. Road bars are measured by their width with 40, 42 and 44cm being the most common sizes. That bike is fairly small so the bars are most likely 40cm. The size is usually marked near where the bar is clamped by the stem. You can also measure them by measuring the straight line from the center of one end of the bar to the center of the other end of the bar.

Not the answer you're looking for? Browse other questions tagged handlebars or ask your own question.

25
Upgrading straight handlebars to drop handlebars
4
Drop Handlebars on an Old Bike
1
Getting used to narrower handlebars
3
Loose Handlebars
3
Are there geometrical differences between framesets optimised for flats vs drops, other than top tube length?
2
Bullhorn handlebars or extension grips?
2
1970 Schwinn Tandem - How to move rear seat further away from handlebars
10
How to bend handlebar to customize it?
1
How to raise handlebars?
4
Have old bar end shifters which don't seem to fit in the new handlebars