key broke and stuck in U-lock with bike locked [duplicate]

Luck would have it my key broke off when I was trying to unlock my bike. The lock is U shaped ABUS. I've read people had this before, however biggest problem is that bike is now stuck at the school, locked to a metal grid. Half of the key is inside the lock and there is no way to pull it out. Obviously I can't take it to locksmith and my moves are pretty limited due to position it's locked in. I don't care about the lock. I wish to free my bike without losing the front wheel. Any suggestions? 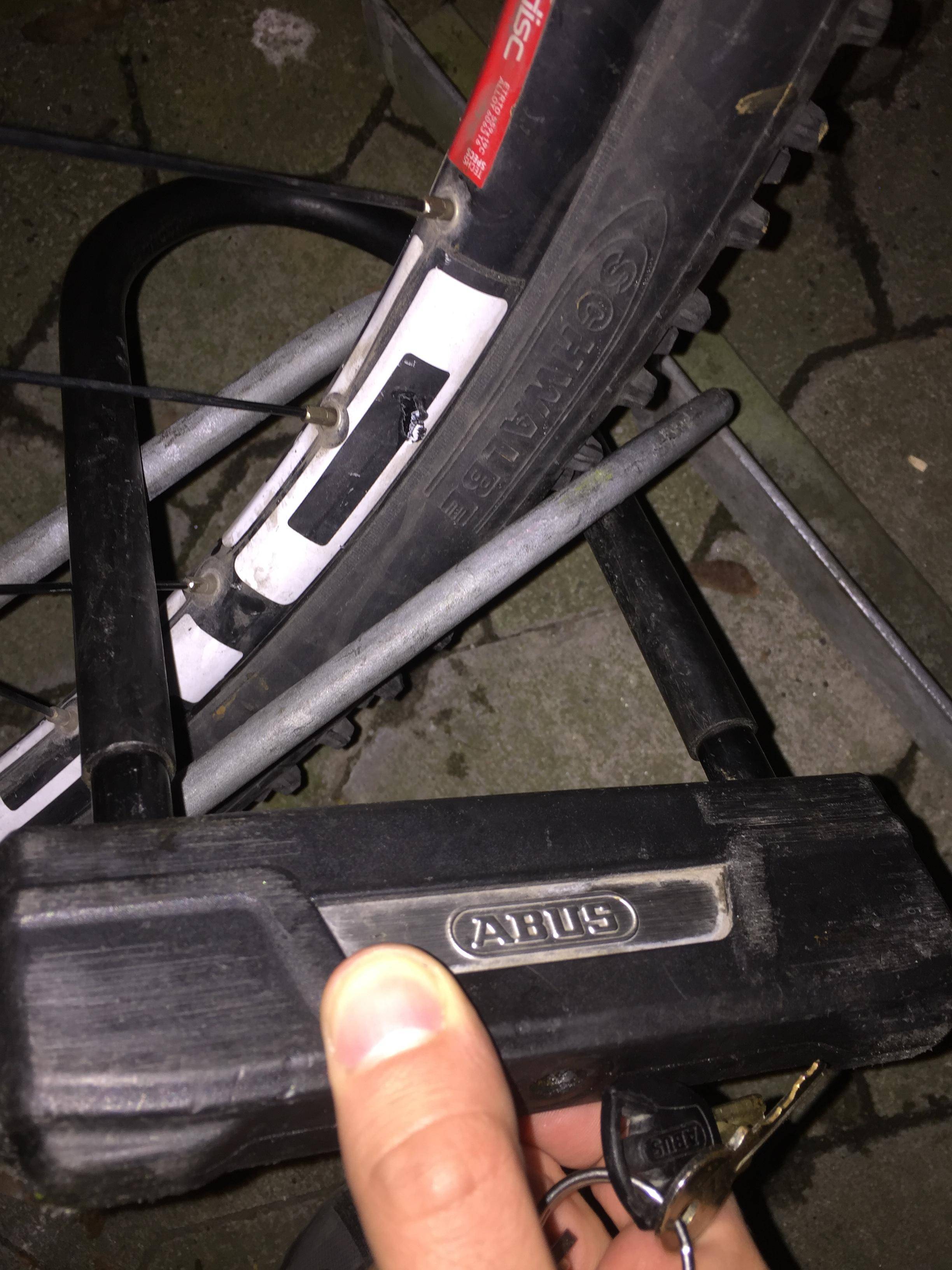 If the key's broken flush and you can't grab it with a pair of needlenose pliers, you should call a locksmith or the police.

In all likelihood, they will just cut the lock with an angle grinder or a hacksaw with a diamond blade.

Though from the picture, it looks like the lock mostly is open and maybe a good hit with a hammer might dislodge the lock.

If you live in an area where you don't need a license to use lock picks you can purchase a set. These will always have a "key exacter" which is a pick with a sharp hooked end. I'd imagine you don't want to waste the time or money getting a set (if it is legal there), but a friend may have a set they got awhile ago with a fancy.

Otherwise you'll have to cut it yourself as I had to when mine jammed for the last time. This means that you'll want to notify the campus security and have some sort of "proof of purchase" and a carbide hack saw. Normal hack saw blades won't even scratch a shackle if it is good steel, but a carbide blade can cut it in about 5min with a strong arm.

Otherwise, you'll have to contact local security, somehow convince them it's your bike, and pay for someone to cut it.

There are several ways to break a bike lock.

Like others have said an angle grinder is your quickest method. They make plenty of battery pack powered ones. You could probably rent one. They are one of the favorite tools of high end bike thieves.

Bolt cutters may work but it would take forever on that Abus hardened steel and unless your a body builder or have some supremely kick ass cutters, i wouldn't try it.

Jam key method - One that may or may not work depending on how deep it broke off, would be to hammer a small screwdriver into the key hole smashing the key fully in. As long as the broke key piece is fully seated and has already moved the tumblers, and you can get a screwdriver in there far enough you only need it to twist the cylinder. More than likely you wont have enough room to try this but its worth mentioning.

One other method used semi frequently is lock de-icing spray, which is used to freeze the metal making it brittle and then a screwdriver is hammered into the key hole or where the U portion meets the shackle depending on the lock and application. Although Abus and Kryptonite are supposedly immune to this on their higher end locks.

The last method that is used is a hydraulic lift, the ones used to lift cars to work on. Although i have my doubts you will be able to utilize this method i am mentioning it for posterity's sake. The higher weight load the better. Position the jack in between the two bars to the U shape and start jacking, keep going until the lock pops. I have also seen this done to actual racks but i wouldn't recommend defacing/destroying public property.

Or call the police, that way no one calls them on you trying to break it.

12
My key jammed in my U-lock. How can I unlock/break it?

6
U-lock stuck on a bike
4
My bike key is broken off inside the lock
2
My lock was rusty and key snapped while trying to unlock bike so now its permanently locked
1
Key Stuck in bike lock!
5
Removing key from kryptonite lock
1
Broken Key/Lock
12
New D-lock failed locked up
2
Frame lock that can lock without key inserted
4
Lock jammed - key will go in and out but cannot turn