There are a lot of blog posts about cheap import lights (like SolarStorm etc) and how they perform. What is not clear to me is why they are so cheap. I know their battery packs are low quality, but that by its own doesn't justify the price difference. Even replacing their battery pack with a EU/UK made, their price caps at around £35, which is less than half of the cheapest branded light with similar output. What are the shortfalls of these kind of lights?

I run a bike light testing and review site called The Bike Light Database which started as a series of blog posts for the Bicycles Stack Exchange community blog. I've personally tested dozens of lights, and have read lots of info online about countless more. I also speak with lighting companies regularly, have visited a bike light factory in person, and have experience in manufacturing engineering (albeit in a different industry).

Simply put, most cheap imported bike lights are not safe. The batteries and chargers are the biggest safety issue, although the overall design of most of these generic lights is inherently flawed as well. I'll address the batteries first because that's the foremost issue.

Most high-powered rechargeable bike lights (and flashlights) use 18650 batteries. These are a standard size and voltage, and are interchangeable if the device is built in such a way as to allow access to the battery cells. They're found in everything from lights to electric cars to laptops. Standard 18650 batteries have a nominal voltage of 3.7 V, and a fully charged cell is about 4.2 V. Most people consider any voltage below 3.2 V to be unsafe. Capacities go up to around 3600 mAh, but are usually somewhere between 2300 and 3200 mAh. As of spring 2016, there are no commercially available over 3700 mAh, so if you see anything labeled 4000 mAh immediately dispose if it in a safe manner; it's a fake and probably dangerous.

It's important to understand that these batteries hold a lot of energy, and if released in an uncontrolled manner, will explode, burn, release explosive vapors, and yes burn your house down. Used safely, they are an awesome technology which has enabled the high-powered lights with long runtimes available today. These too-cheap-to-be-true Chinese products do not use the technology safely though.

You can get "unprotected" or "protected" 18650 cells. A protected cell has a tiny circuit board on the top which monitors the cell voltage and ensures it doesn't get too high or low. It prevents overdischarge, overcharging, and short circuits. Unprotected cells are considered safe to use in lights designed for them as long as you aren't using more than two, preferably in series. Cells should also be charged individually or in matched sets to ensure the voltage is the same for all cells in a pack. Otherwise, if one cell is already charged and another is not fully charged, the charger could over-charge the full cell causing it to fail.

The batteries sold with these cheap lights tend to be the lowest possible quality to achieve the desired price point. Even the "replacement" battery packs are often of dubious quality. For example, I took apart one such battery pack for a review of a generic Cree U2 "5000" lm light (widely marketed as the Solarstorm X2). Here is a picture of the battery pack: 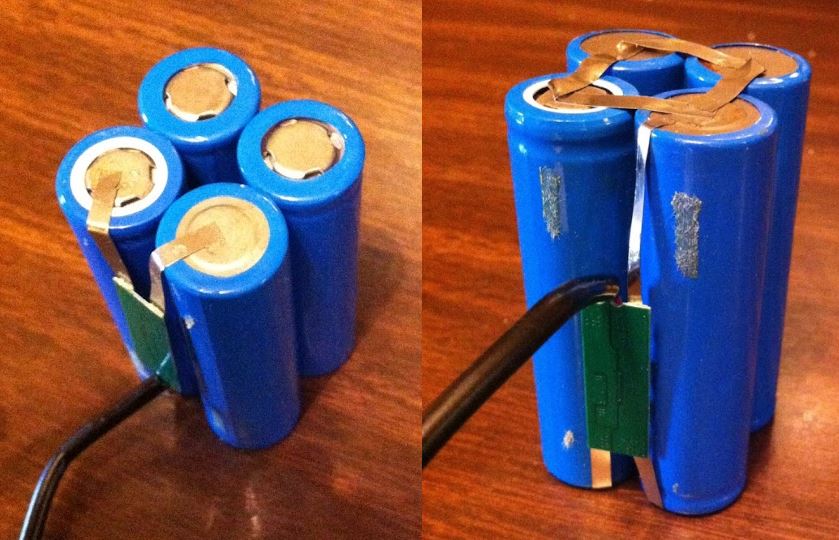 Two of the cells are dummies - they aren't actually wired such that they could deliver any power. That's "OK" though because the voltages of those cells were 0.0 and 0.3 V - far below the safe cutoff of 3.2 V. The other two cells were mismatched, at 4.0 and 3.8 V. While those voltages are in the typical range, you always want your battery voltages to match. This pack was likely constructed from recycled laptop batteries, with the two disconnected cells being completely dead batteries which were added to give the pack heft and feel like it was legitimate. None of these are protected cells.

Not all cheap imported bike lights are this bad, but the problem is that you don't know how bad it'll be until you actually get it. Quality control is practically non-existent, and because hundreds of vendors sell visually identical products it's impossible to be certain if you're getting a "good one" or not. Make sure to avoid like the plague anything with "fire" in the name, like UltraFire or TrustFire. These brands are known to be widely counterfeited and often dangerous.

Suppose you buy a replacement battery pack which you trust – although again, I'm not sure how you would trust one without opening it to see for yourself. There are still a number of design flaws with these products:

You get what you pay for...

Reputable lighting manufacturers have a brand to uphold, and I think that most of them do in fact care about their customers. I've met these people, and they're all passionate about biking. If you call them, a real person helps you with your problem. Good luck contacting somebody who was involved in the manufacturing of any of these generic lights. A handful of online sellers have earned a reputation for good service by immediately refunding or replacing failed lights... which is nice, until you realize that a product with hundreds of reviews saying "mine failed but they replaced it, they're so nice 5 stars!" still means hundreds of people's products failed!

If you're on a tight budget, maybe "price" is your only feature requirement. But seriously, name brand bike lights offer many features which you won't find on cheap generic lights. Things like carefully designed optics, USB fast charging, well designed mounts, specifically designed daytime and nighttime flash patterns, side visibility, and more.

So, what are your options instead?

First of all, just to be clear, there are cheap Chinese lights which are safe to use. The problem is, these are widely counterfeited, so it's best to buy from a reputable dealer in your own country. Single-18650 lights are usually safer than multi-cell lights. Buying quality batteries is always a must. I have some recommendations on my batteries FAQ page.

I also maintain a frequently updated list of recommended bike headlights. Product recommendations are a bit outside the scope of Stack Exchange, so keep an eye on the website for recent suggestions, or come chat about it.

From my experience the cheap Chinese lights are hit or miss. I have not tried the solarstorm but i do own one of the "BrightEyes" "brand" and was pleasantly surprised. The main thing is there is no real quality control from what i can tell. Other issues i have run into on other lights is the power cable coming out from the light head, solders breaking or being bad on the circuit, stuff like that.

Also the light i bought said it was rated at 1200 lumens, i would guess its maybe 700, its equally bright as my Cygolite Metro but the beam pattern is kind of strange. Its neither a flood or a high beam its kind of both, a very bright middle and washed out sides.

All of this factors into the pricing if i had to guess. Name brands test all their stuff pretty extensively. Cheap Chinese companies.... not so much.

I personally have had good experience with the cheapo depot Chinese lights, but have heard a lot of complaints as well, most being fixable with patience and a soldering iron.

Potential problems on any bike light:

I have bought $80 lights locally that work fine, and $5 chinese lights where different units of the same model have different construction. I now carry two front and three rear lights, and if I expect to ride at night will pack one more each way.

Answer: So with cheap lights, you're taking a risk that they work as stated. With buying locally, someone else has taken that risk and confirmed they work as expected, and will take responsibility via warranty if they don't work.

I'm a daily commuter and cover about 60 miles a week, all year round too.

I've had the same NiteRider Classic system for 15 years. The batteries have been replaced 5-6 times (they stop holding a charge eventually) but the bulbs, electronics, switch, etc have been 100%.

Answer: Branded lights last longer than cheap unbranded ones. The seals and moving parts are higher quality and function reliably for longer. And the spare parts are still available to purchase.

Not the answer you're looking for? Browse other questions tagged headlights or ask your own question.