How to fix a detached brake cable?

My rear brake cable detached yesterday while riding. When I pull the level all the way back (which I can now do with no tension), I think I can see the end of the brake cable inside the brake hood, but it's no longer being pulled by the lever.

Without pictures or a better description, it's hard to know if it was a failure of the cable or the brake lever. If the brake lever has broken and can no longer grasp on to the end of the cable, you'll need to replace the lever itself. However, a more likely scenario is that either the nub on the end of the cable that the lever holds on to has come off. You may also have a lever where the nub can pop off of if there's no tension in the cable, which can happen if there's too much friction in the cable housings. This may also be caused by the cable having become detached from the brake: you're pulling the lever, but it's not attached to anything.

The quickest and easiest thing to do is try to simply re-cable the bike. This can be done quickly (time: 15m) and cheaply (cost: $10), and in doing so will also help diagnose if the problem is deeper. You should also go ahead and re-cable the other brake lever and the shifters as well — if this was caused by a failure in the cable, the other cables may be ready to fail as well. 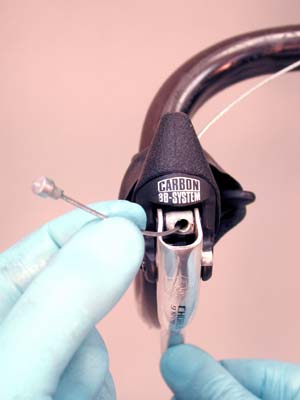 If you feel a lot of friction pulling the cable out or installing the new one, you should replace the housings. This will take a little bit more time (45m) and some more money (housings: $10, bar tape: $15), but is still pretty easy to do. Unwrap your handlebars and re-insert the brake cable, replacing the old housings as you go. Wrap the handlebars back up, and you should be all set.

If the nub end of the brake cable isn't being gripped by the brake lever, or the piece to do so is missing, you will have to reinstall a new brake lever. This will be a good bit more expensive, and will also require that you re-wrap the handlebar tape.

Does the other brake still work? Can you see how the cable end is connected in that lever?

First, check the brake. Different brakes have different styles of how it's done, but there's usually some way to quickly release the brake (to make it easier to remove the wheel).

Second, check the cable all the way from the brake to the lever. The cable will run the whole way, of course, but the housing that the cable runs in will typically be in sections. The ends of the sections (that aren't at the brake or lever) will generally have a sort of metal cap that fits into some kind of stop. The stops on my bike are sort of little cup shaped things with a hole for the cable and a slot along one side to allow the cable to be run into it in the first place.

I've only ever had it happen when I forgot to reattach the brake after fixing a flat. When the cable has too much slack it's easy for either of those problems to happen. Once you get everything working again, check how much slack the cable has. It shouldn't be common if everything is adjusted right.

If it's really become disconnected inside the brake lever, how to reconnect the end without untaping and retaping your bars will depend on exactly how the cable is connected inside the lever. On mine I think if I released the tension elsewhere on the cable it would be possible to pull the cable end into the place it should be in (but it would be a fiddly sort of operation working in a cramped little space).

And, FWIW, I have few issues with putting my greasy hands onto the $24 Zinn book; however, greasy hands on the MacBook (or your laptop of choice)....not so happy about that.

Not the answer you're looking for? Browse other questions tagged brakes repair or ask your own question.