What's the strongest way to bond a cable stop to an aluminum frame?

I recently picked up another well loved GT road bike frame- it's in great shape aside from a missing downtube cable stop. The model is a ZR 4000 probably from 1999, it's 7005 heat treated aluminum. My best guess is that the cable stop was originally glued or bonded to the frame somehow based on a lack TIG weld lines or braze. I'm not sure if the cable stop snapped off from poor storage or when the frame was in use last. It's a CL find and lived in a garage for a number of years. 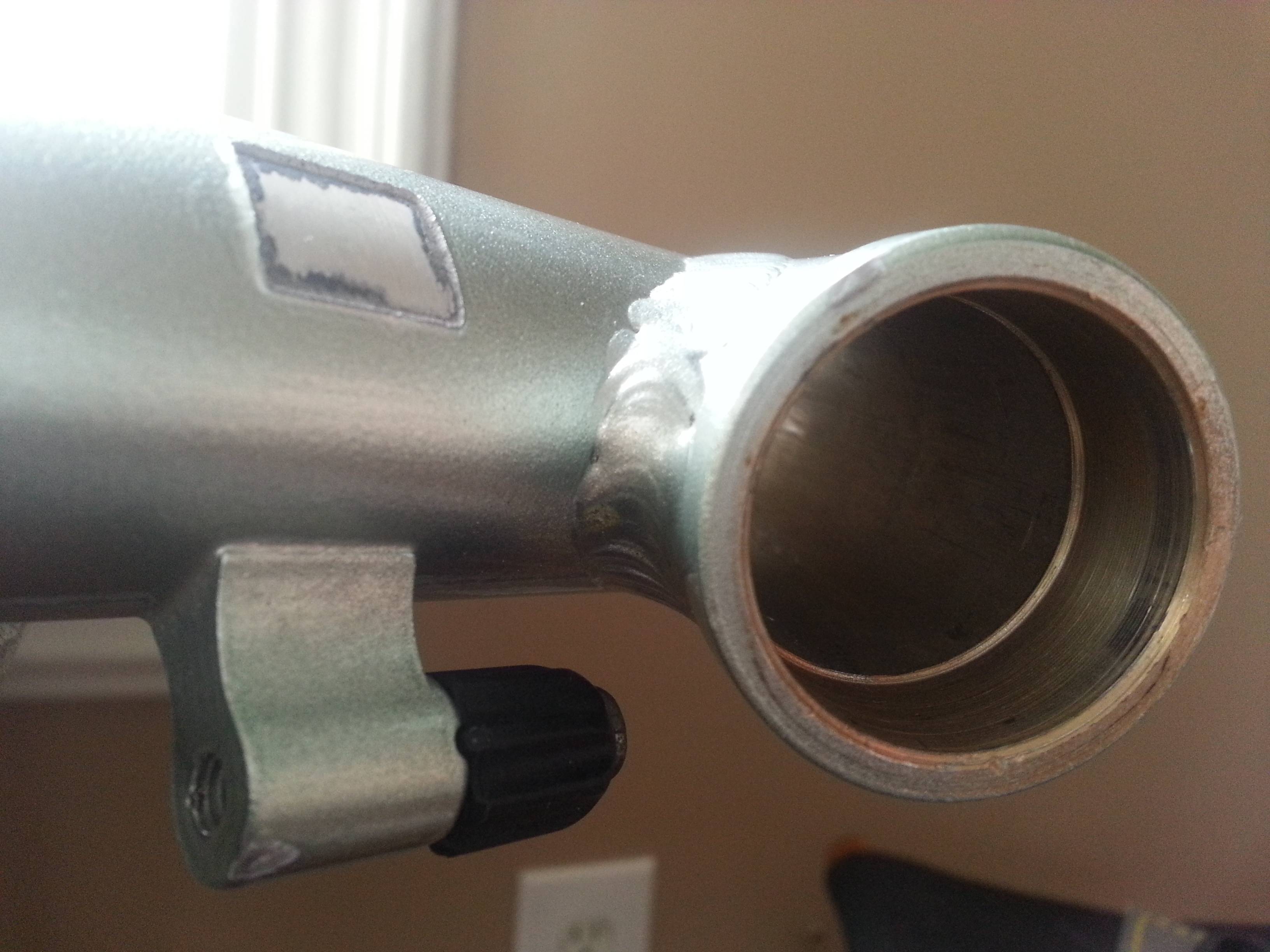 What's the best way to reattach a new downtube stop? Would I have a stronger bond if the new cable stop was aluminum or plastic? I have a great work space with appropriate ventilation and equipment, but after preliminary research I've found a lot of aluminum specific products (like those used on airplanes) can't be purchased online or by individuals, so whatever product needs to be accessible in that regard.

I'm also open to non-adhesive/epoxy solutions, but the tubing is ovalized and very oversized, so using downtube shifter clamps doesn't seem feasible. As a last resort, would using a hose clamp be safe on ovalized, aluminum tubing once I got it tight enough to withstand the forces of shifting? As a last, last resort, I am prepared to run cable housing all the way from the brifter to the cable guides under the bottom bracket. I'd like a pretty bike, but ultimately this one is just for riding and not show.

Since you have a relatively "flat" spot there (at least flat in the longitudinal direction) you have two options:

I did this on a recent Al frame with the exact same problem. I bought a metal (steel) cable boss from the local bike builder and epoxied it myself. I used Loctite's Metal/Concrete epoxy since it's designed for:

Although lots of other epoxies will probably work.

If you do this be sure to read the instructions on the epoxy, clean the surfaces on both parts, and create a good clamp for the piece. It'll take 24 hours to dry fully and you aren't going to achieve good results by holding it with your hands. 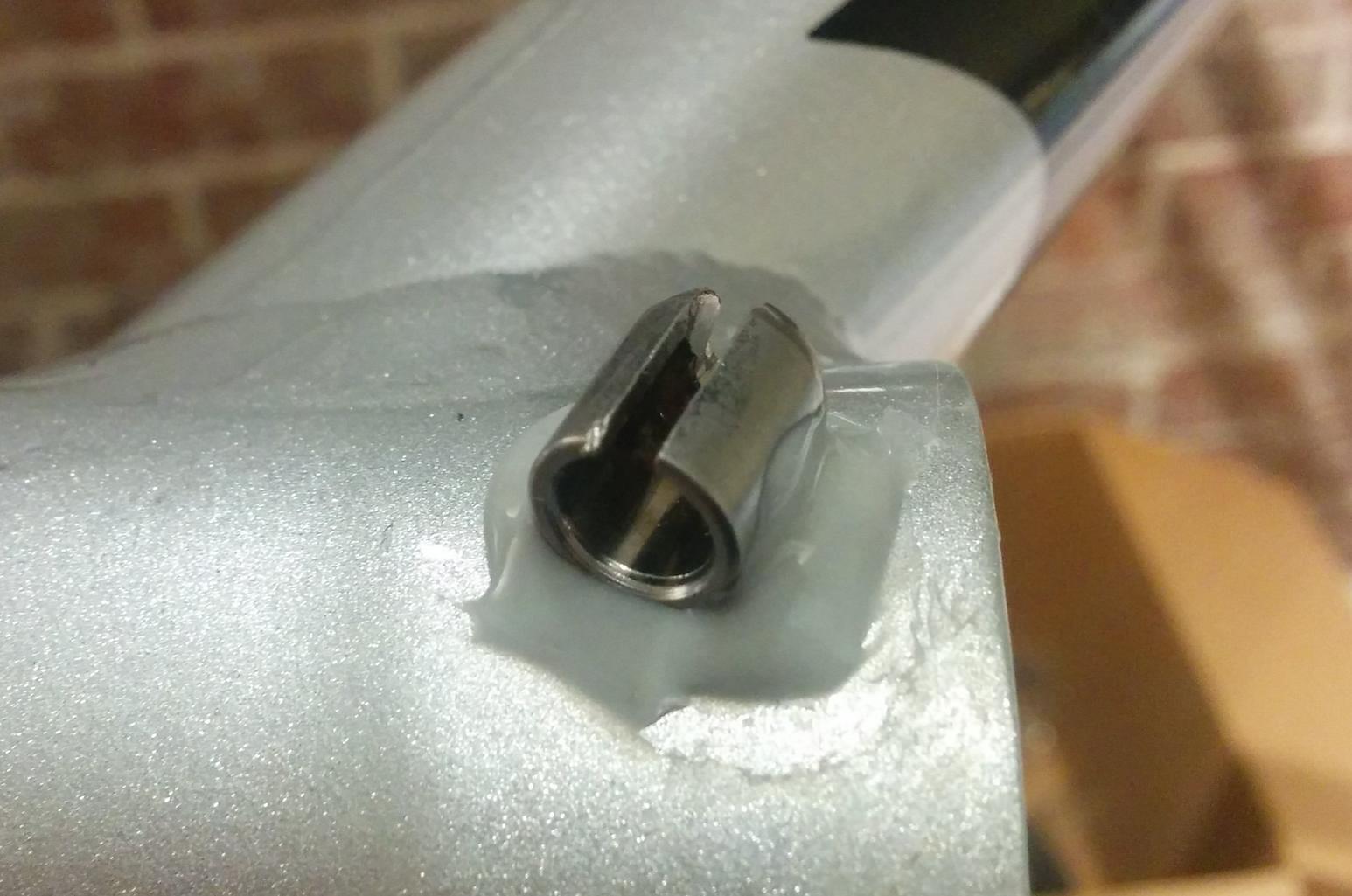 Once's it's dried be sure to test it by attaching whatever brake/derailleur the boss is for(in your case the rear derailleur) and running cable through it. You need to be sure that the epoxy will hold the forces that will actually be applied by the brake/derailleur** Don't expect your results to look pretty though. 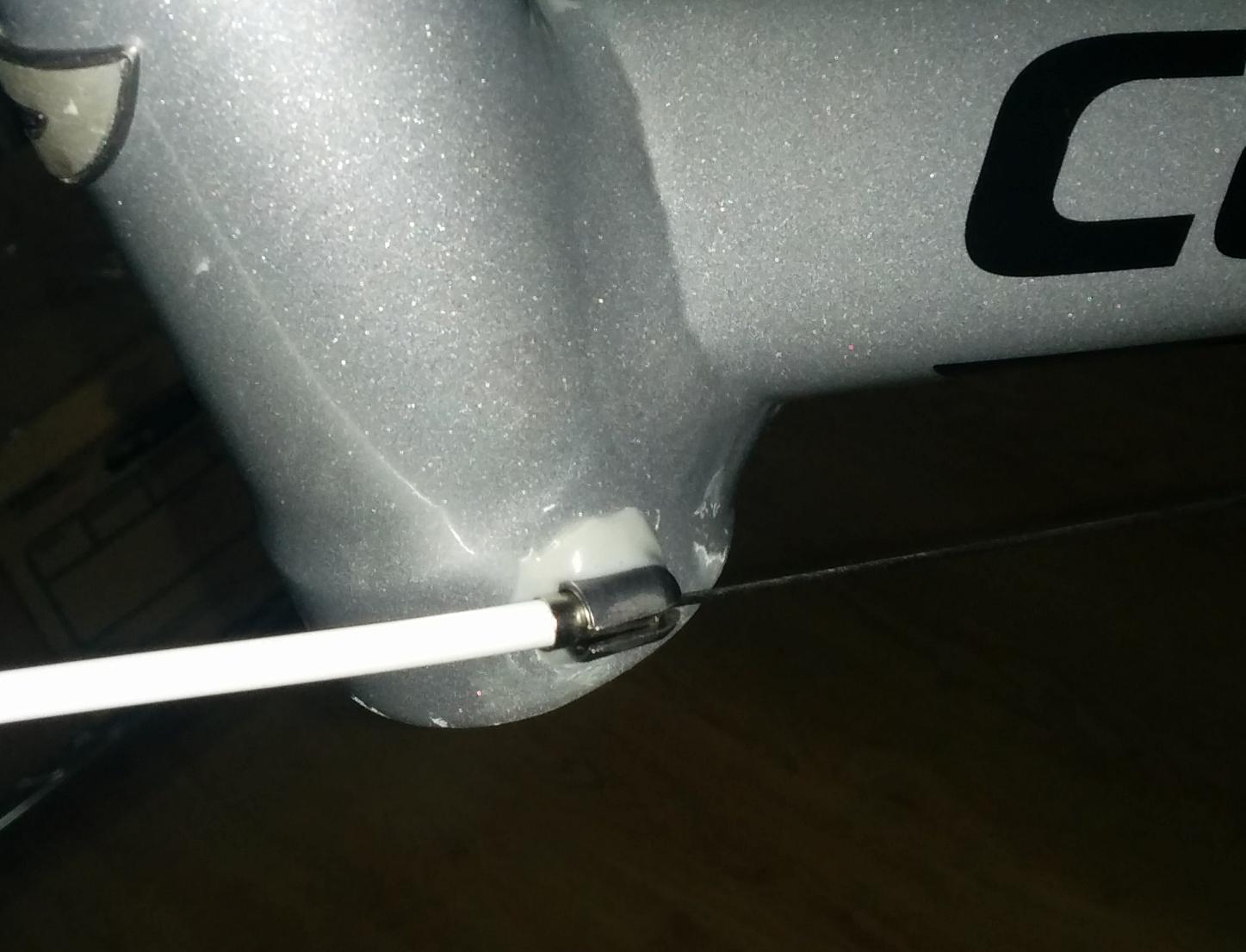 There are many options here depending on what type of cable stop you need. 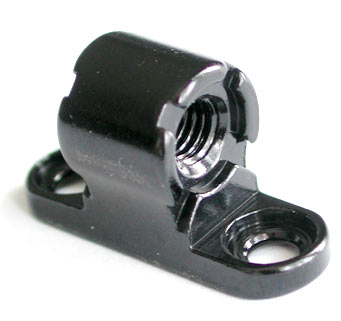 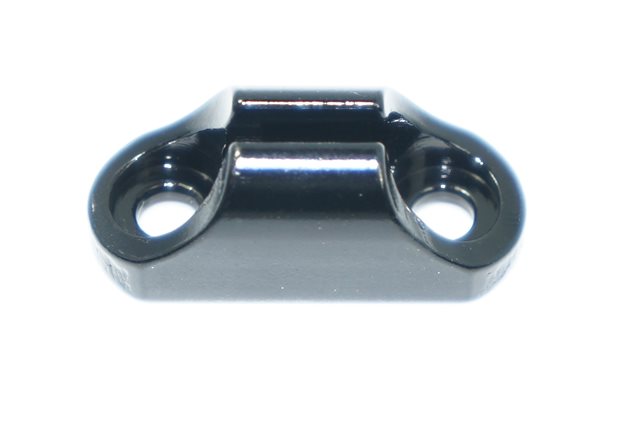 You could easily do this your self but you'll likely end up with a rivet gun and a box of 100 rivets you'll never use again (on a bike at least).

Whatever method you chose, I'd suggest completing it before any of the rest of your bike build (I'm guessing from the missing front end that you're rebuilding this bike). If you can't get it fixed you might have to scrap (or at least rethink) the project and you don't want to waste any money on other parts until you know for sure.

Aside from the heat issue of welding aluminum, you'll also have a tough (impossible?) time finding someone who can weld a steel boss onto an aluminum frame. Or you'll have an impossible task of finding an aluminum boss to use instead. Think about it.. there's a reason the manufacture glued the boss on in the first place.

** Be extra careful if you are repairing a brake boss. It holds more force and obviously has more dire consequences if it breaks off again.

Good epoxy is known to bond metals, especially aluminum very well. Make sure the surfaces are clean and slightly rough for a better bond. I use the same two part epoxy hobbyist aircraft builders use for fixing pretty much anything, including broken ceramic mugs, small broken metal things and even as an insulator on the bottom of PCBs to prevent any shorts.
When looking for replacement cable stops try to get something with a solid base and not hollow so you can glue the whole thing down. From the looks of it the original was only glues around the edge which is probably why it came of.
Another solution could be solder. It will be stronger but look a little asymmetrical, but as long as you do it to the other cable stop too it should look fine. It melts at a low enough temperature for nothing to happen to the heat treatment of the aluminum. I take no responsibility for the frame if you do this however, it's only my guess, and is completely untested. Would like some input by someone who knows a little more about solder and hest treated aluminum about this solution, it seems workable

If you have a 3D printer, you can design cable stops that fit your frame and print them. This is one I made: 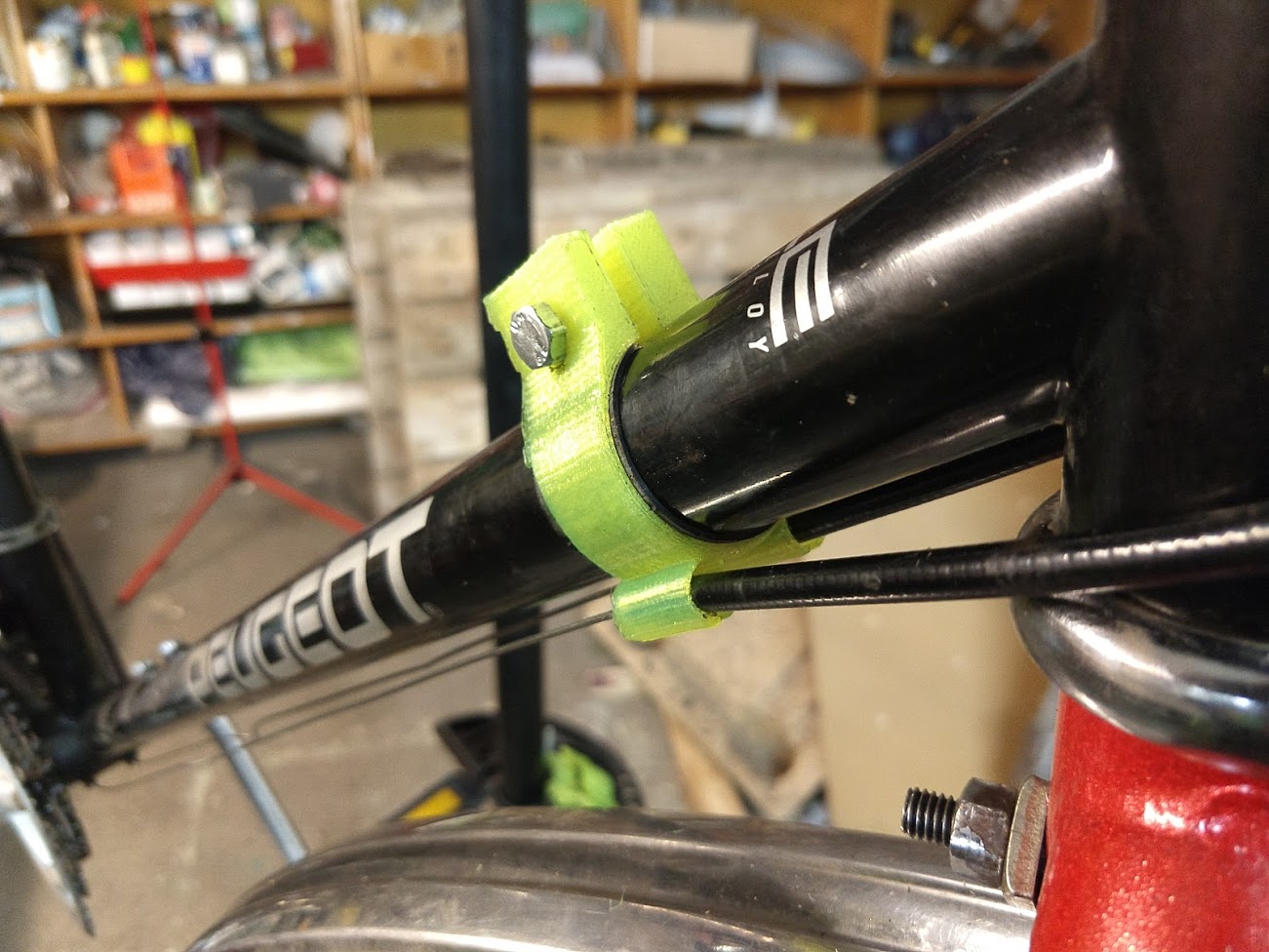 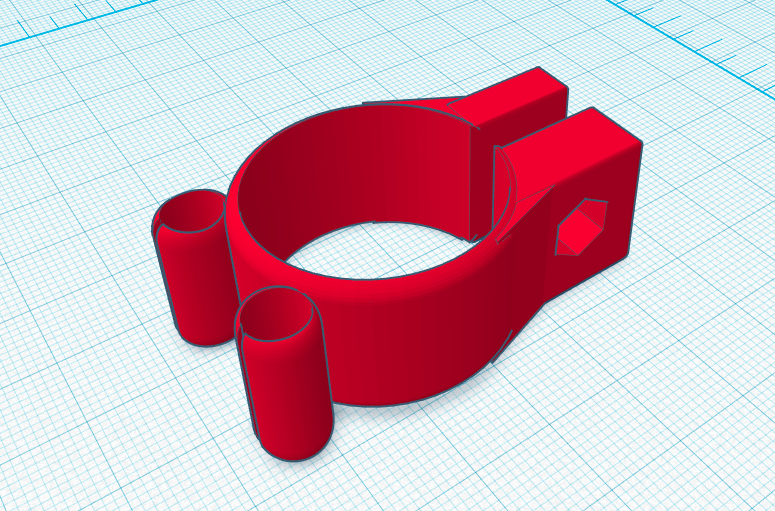 I have been using this version for a few weeks now and it also feels super strong on the frame. Even with some amount of force it can't be moved or turned by hand.

It is printed with PLA. For the 3D modeling I used TINKERCAD.

I just made an improved version because someone accidentally pulled on my cable housing which broke the self-printed cable-stop: 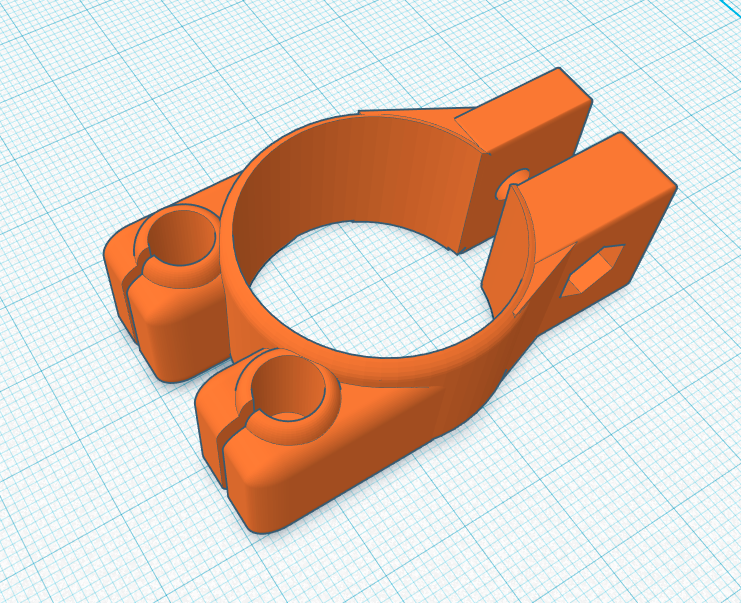 I highly recommend using this design instead of the one above (even if both work fine when treated under normal riding conditions). I am using it since a couple of months now.

I tried epoxying the frame stop onto the frame, and took utmost care but front deraileur cable stop came off.

Now I am considering this "On Frame Cable Stop, Alloy Double, 31.8mm , Black" instead. 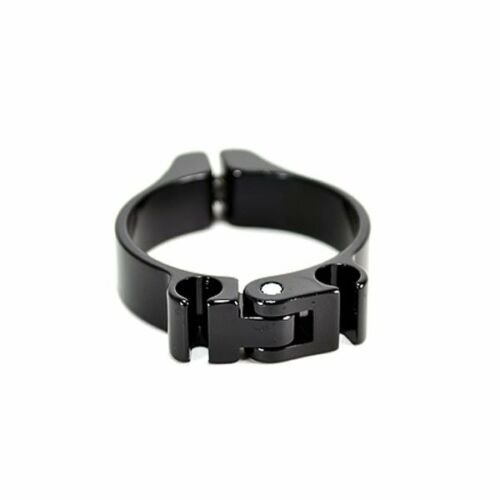 You can take it to a welding shop and they will be able to weld it.

Not the answer you're looking for? Browse other questions tagged frames repair aluminum downtube-shifter cable-routing or ask your own question.