I have an electric bike with a 500w rear hub. The spokes have broken twice in the last month on the hub end of the spokes.The spokes are bent at the hub end and threaded. This is where they break. 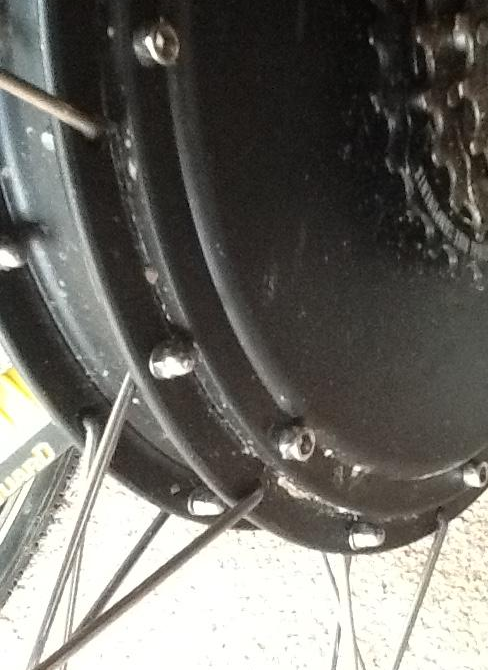 As the bike is under warranty it went back to the supplier for repair and was returned to me with the same type of spokes. Should spokes be made from rod that is threaded at the hub end as it must surely weaken them when bent on the thread. The supplier says it's the first time this has happened but as I've only done 45 km on it since new I don't think that is a good enough answer. What could be the reason for the problem?

You're probably OK as the wheel was (hopefully) properly rebuilt rather than assembled on a production line. I assume it was the same wheel, rather than just a swap-out, as the hub motor is an expensive part. It would be more surprising if they did change the type of spokes, as that would mean holding stock of an extra part. The thread depth is a small fraction of the spoke diameter so shouldn't weaken it too much.

There are a couple of e-bike specific issues here which can increase the failure rate:

We have an e-bike and it broke 6 spokes in a day (after probably ~1000km): 1 in the morning, 1 on the way home, then 200m later another 4. After getting new spokes from the manufacturer, we had the wheel properly rebuilt, and it's completely true, with even tension, and no broken spokes since.

If it breaks more spokes, I'll use the first set to patch the wheel up and order good-quality custom cut new ones for the LBS to rebuild the wheel. If not for the warranty aspect I'd suggest you take the same approach. 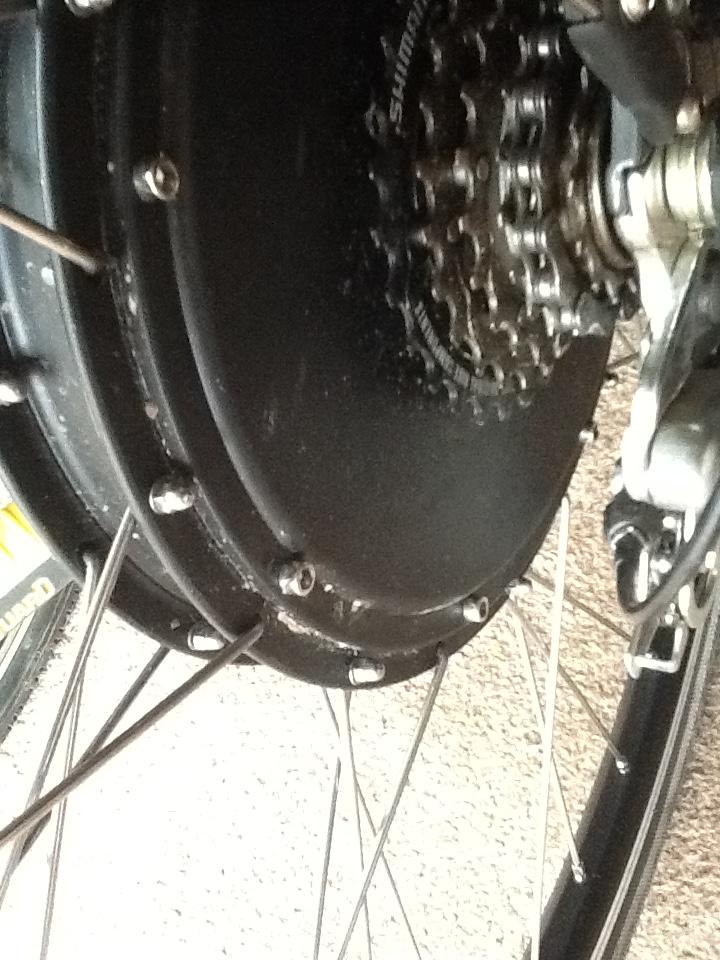 Many thanks for all the replies re my broken spokes. The wheel is a high quality double thickness rim with a Kevlar tyre. The hub alone cost over £500 so it's not a cheap Chinese one. As I stated earlier the hub supplier built the wheel for me using exactly the same spokes. I sent him some motor bike spokes which were 3mm instead of the 2.4 they have fitted but he wouldn't fit them as he said they would invalidate the warranty, and if they failed and I was injured they wouldn't entertain any claims. I haven't any of the old spokes as they went back with the wheel. I have attached a photo of the hub showing the spokes. If it happens again I am going to get it fixed locally at a major bike suppliers. Cheers

Spokes will always break on the bend as this is the weakest point.

EBikes can generally break spokes or stretch them (in the case of Galvanised spokes).

The size of the hub does not allow an ideal lacing pattern, so bouncing off kerbs, potholes and cobbles will cause the unsprung weight of the hub to put excessive strain on both the spokes and the rim.

I would try a stronger section rim as it is my opinion that the flex in your rim is causing your spokes to fracture.

Cosmetically it may match your existing rim but the spokes you have are stainless steel and as such must have a very high breaking strain as they look to be 2.5mm plus, the flex and diffusion in the rim will cause the spokes to guillotine themselves in the hub holes.

I had similar problems some time ago but I am pleased to say that changing the rim to a much stronger one more suited to my needs cured the problem and I can now report over 3000 miles of trouble free Ebiking.

I had the same trouble on my rear wheel drive Freego Hawk electric bike. Four spokes broke a week after having it.

The engineers at Freego rebuilt my motorwheel with thicker 12 gauge spokes, and that has solved the problem.

A lot of manufacturers put thin spokes in that are just not strong enough to cope with the stress and load factors of a motorwheel. The problem is made worse with a rear wheel drive hub motor, as you are also peddling, putting added stress on the wheel.

Since my last info the spokes on my wife's 250w hub also broke 5 spokes. I have now had two sets made at a motorbike shop with proper "J" bend at the motor end in 12 gauge stainless and new rims drilled out to take the bigger spoke nipples.

I am hoping to get the bikes back next week them I am going on holiday to Somerset with the bikes. I will let you know the outcome when I get back.

Spokes only break when they do not have even tension. Probably, your wheel was not built correctly, leaving the spokes with uneven tension. The effect of this is enormous and can easily make the difference between several broken spokes a day and no broken spokes for several thousand kilometers.

You will know whether your repair shop just swapped in some new spokes, or whether they actually ensured even tension. In the first case, you will have to see them again very soon, in the later case, you will just enjoy your new bike. I hope it's the later.

I had a lot of problem with standard 2,3 mm spokes and large 1000-1500 watt hub motors. Spokes tend to break after 2000 km run. Which is a few month for me. Problem can be solved with 3x148 mm or 3,5 x 148 mm scooter spokes (for simson, jawa or other Eastern European brand). For this use Altrix Warrior rim 20 mm wide and 30 mm high, ETRTO 559 for 26 " wheel. Watch out because there are 2 types of warrior rims! One of them is not 30 but 20 mm high only which does not work with 148 mm spokes. You have to drill the rim holes for larger spoke nuts. Hub motor needs a new lace. For this you need to drill new holes on it. Use paired spoke hole layout to have spokes in angle instead of radial orientation. Distance between spokes is about 15-20 mm, your choice. After this I went 50000 km with my bike without any problem.

Personally I'd rebuild the wheel with better thicker spokes. My Ebike wheel had 13 gauge spokes and never broke one, but it was only a 250W motor and it was on the front. If your hub and rim can take more spokes too, consider increasing the spoke count.

Rear wheels take more than half the load of a normal bike, normally around 60% of the whole bike+rider's weight Given you have a heavy motor in there as well.

The motor's weight is also unsprung weight, so it will affect the wheel more than the rider's weight.

As such, don't jump off kerbs/curbs and don't slam into potholes.

As many others have said, the wheel needs to be true for the spokes to last, and properly tensioned. It also needs re-true-ing from time to time. I ignored this and I lost a spoke a few days ago. By the way, judging by the photo I have the exact same wheel and motor and I would appreciate the contacts of your seller as I lost mine a long time ago (it's an old out-of-warranty purchase). Or some hints on where to find such spokes. Take care, Florin

The Magnum metro+ range over here in the US have a weird pattern and we have had a few into our shop. From what I see often its a design issue more than the substandard materials though if one breaks often more will follow due to the distribution of the forces through the other spokes.

Pictures will be good.

In electric bikes there is a huge load on the rear spokes, so they tend to loose and break. You have to check the spokes tension every couple of months, adjust it and true the wheel.
Maybe in your country you have better quality bikes than we have, but I really didn't see even 1 bike without this problem. That is why magnesium rims became common.

12
Are there reasons not to use always the max level of assistance?
4
Spokes keep breaking