Has anyone ridden fenders in a Grand Tour?

Has anyone ever ridden a bike equipped with some type of fenders in a Grand Tour, for even a short part of the race?

Are they UCI race legal?

If so, who was it, what was the race, and when did it happen?

racing fenders history
Share
Improve this question
asked May 13 '16 at 23:47

Yes, for smaller ones. No, for full mudguards.

Here's Team Katusha using them on the ‘Paris Roubaix stage’ of the Tour de France in 2014, according to Stickybottle: 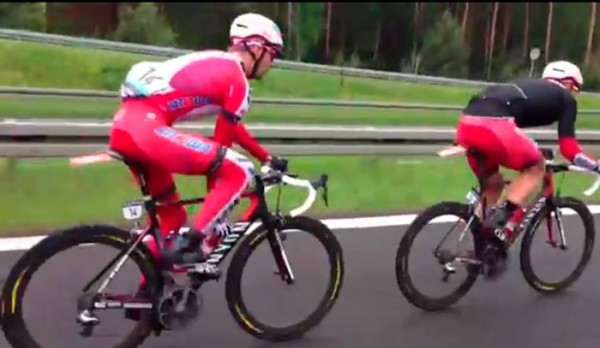 While mudguards are fitted to most bikes used by racing cyclists for winter training, it’s against the rules to use them competing.

Not only would they hugely slow down a rider, but mudguards and the apparatus that keeps them in place are simply deemed too dangerous for racing. They pose a stabbing hazard in the event of a high speed crash.

However, the top pro team Katusha today took to the start line of stage 5 of the Tour de France, with a wet and muddy day on the pavé in store, with mini mudguards fixed to their bikes.

They are a much smaller and neater structure compared to traditional mudguards.

They are essentially a simple one-piece flap that attaches to the saddle and should keep the riders’ backsides a little drier than normal.

Katusha has been using them since the start of this season but today’s TV exposure on the ‘Paris Roubaix stage’ of the Tour is the first time they’ve been seen on the biggest stage.

The team agreed a sponsorship deal this year with Sencillo Bikes in Spain, which distributes the mudguard flaps.

The company was undoubtedly praying for rain on today’s pavé stage; the perfect conditions to help bring their nifty little product to the attention of the global TV audience.

Here's one of the photos on the sponsor's website from Giro d'Italia 2014: 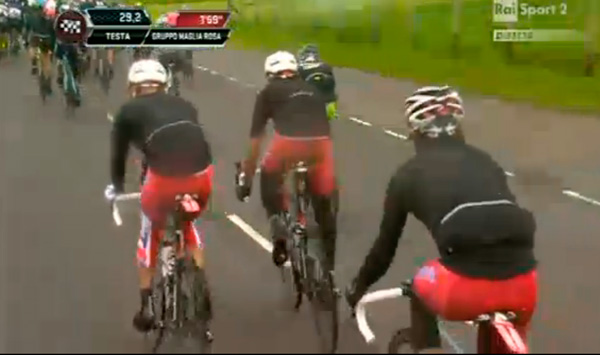 They're still sponsored by them this year, here's their EDICIÓN KATUSHA 2016 for sale, blurbing:

The UCI rules (PDF, 1.3.024, p.70) would likely forbid full mudguards as they would constitute a protective screen or fairing for the wheels:

Any device, added or blended into the structure, that is destined to decrease, or which has the effect of decreasing, resistance to air penetration or artificially to accelerate propulsion, such as a protective screen, fuselage form fairing or the like, shall be prohibited.

Not the answer you're looking for? Browse other questions tagged racing fenders history or ask your own question.

70
Why aren't Tour de France riders going any faster?
5
Do flat fenders work fine?
3
Reason behind the Tour Down Under “People's Choice Classic”
1
full fenders on a track bike
6
Validity of UCI motor concerns
11
Why do riders not take advantage of other riders misfortune
1
Race organizers: how much does it cost to put on a stage race?
10
“Racing bikes” with fenders and a rack
8
Attacking during a race when your competitor has a mechanical failure?
9
Are neutral service bikes actually useful?