Aero wheel on front, regular on back - why?

I've seen a lot of riders in the city, usually fixe riders or courriers, riding bikes with an expensive aero wheel on front and a regular, cheap-looking, un-aerodynamic alloy wheel on back.

Why would anyone do this? The main reason I can think are that:

This question has a lot of relevant information and seems to point to the fact that bike handling will be much worse with this kind of setup, so I would probably eliminate the possibility of it offering some kind of advantage.

So is this just a style thing or what? 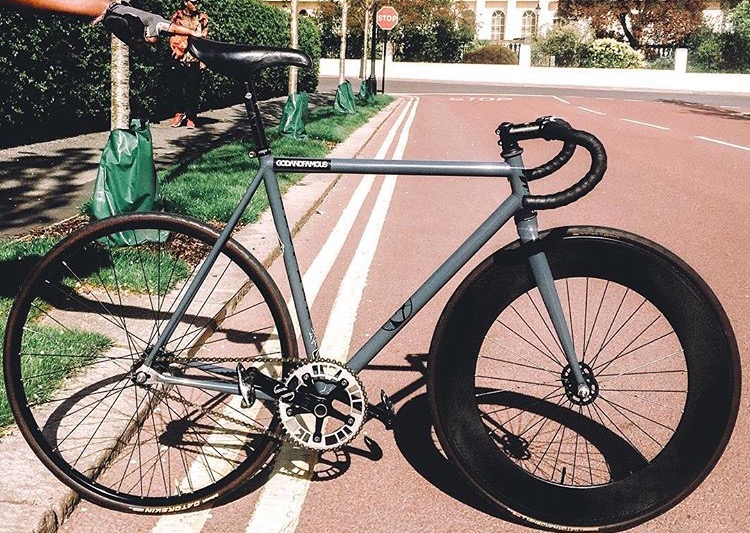 As stated in the other answer, the driving force behind these setups used to budget. The rear wheel is fixed gear, which limits the budget selection to old track wheels, converted freewheel wheels and self-built. Two first are high spoke count because that was all that existed back in the day, and easily available components for self-building are of the high spoke count variety. In front, any road wheel will do.

It has also been claimed that messengers favoured Aerospokes, Tri-spokes and like because those are faster to lock: instead of carefully threading you could just throw a chain through one. This does of course not apply to the bike in the picture.

Other reason to have a setup like this is that it looks radically different and similar to what some messengers use.

I think this is being over-thought. Aerowheels on messenger rigs have nothing to do with performance, quicker locking ability etc. etc. It’s just the new generation mimicking the older generation, trying to be cool.

When I was a messenger, many of us were pursuing racing careers. The messenger gigs were essentially poor man’s training, and a steady source of income- since sponsors didn’t give you enough to live even on ramen. When fixies started to become cool, the next generation of messengers were mostly posers. I say that with love- spend enough time on the bike, and the most blatant, fashion-conscious poser will become an actual rider, and to their credit, that’s exactly what they did, and many of them ended up very cool people in love with the bike. But sometimes some lame things from the early part of that process can survive, and even end up being the norm.

So it was with the racer affectations such as aerowheels. A lot of those guys looked up to the older messengers, they’d see them around town on their race rigs when they weren’t working, and monkey-see-monkey-do.

I remember once I was trying out a full-carbon (no padding) saddle from a sponsor. This was bananas back in the day, because even though carbon wasn’t exactly new for frames, it was cutting-edge for this kind of application. Anyway, I ran into some young’ns down at the shop, and like two weeks later, there was a full-carbon saddle craze among the hipsters who were on the job. That saddle was horrible even with chamois- I basically tried it and sold it. I can’t imagine what it must have been like with jeans and being weighed down with fifty pounds (24 kilos) for the mail run. But they rocked ‘em, god bless those crazy kids.

Is there a bike co-op in your city? When I ran around on a ratbike like that, it was because I just got whatever people had laying around and stuck it together as cheaply as possible, usually with no thought about anything other than what was directly in front of me at the time. I needed a wheel that would roll, and once I put it on, I didn't think about it again at all.

I bet that overall, there is a surplus of "expensive looking" but actually used and mismatched front wheels kicking around. Rear wheels break more often because they have more stresses. I bet they picked that wheel up for a lot cheaper than you imagine.

From an aerodynamic perspective the biggest aero gains come from the front wheel set-up as it is the leading edge breaking the clean air. The rear wheel runs in the "dirty" air so aerodynamics gains will be smaller.

Not the answer you're looking for? Browse other questions tagged wheels fixed-gear handling or ask your own question.

2
How bad is handling with only front aero wheel?

2
How bad is handling with only front aero wheel?
5
Does group riding negate the aero benefit of deep rim wheels?
2
Front wheel bent
1
Children's bike problem with back wheel
5
Front wheel oscillation
4
What pressure should I run? Front versus the back wheel?
1
Regular front road wheel for a single speed bike
0
Front wheel shimmy