How to remove pedal bolt with round, smooth head

I'm trying to take the reflector off of some old French track pedals but can't remove one of the bolts holding the reflector on because the bolt holding the reflector onto the pedal rotates with its nut and it has a smooth, round head with no screw drive at all, so I can't find a way of producing any torque to remove the nut by holding the bolt in place. I even tried "clamping" the bolt head with some pliers by putting the head of the bolt against one jaw of the pliers while the other jaw was against the inside of the pedal itself, but the bolt still rotated freely even when applying as much pressure as possible with the pliers. 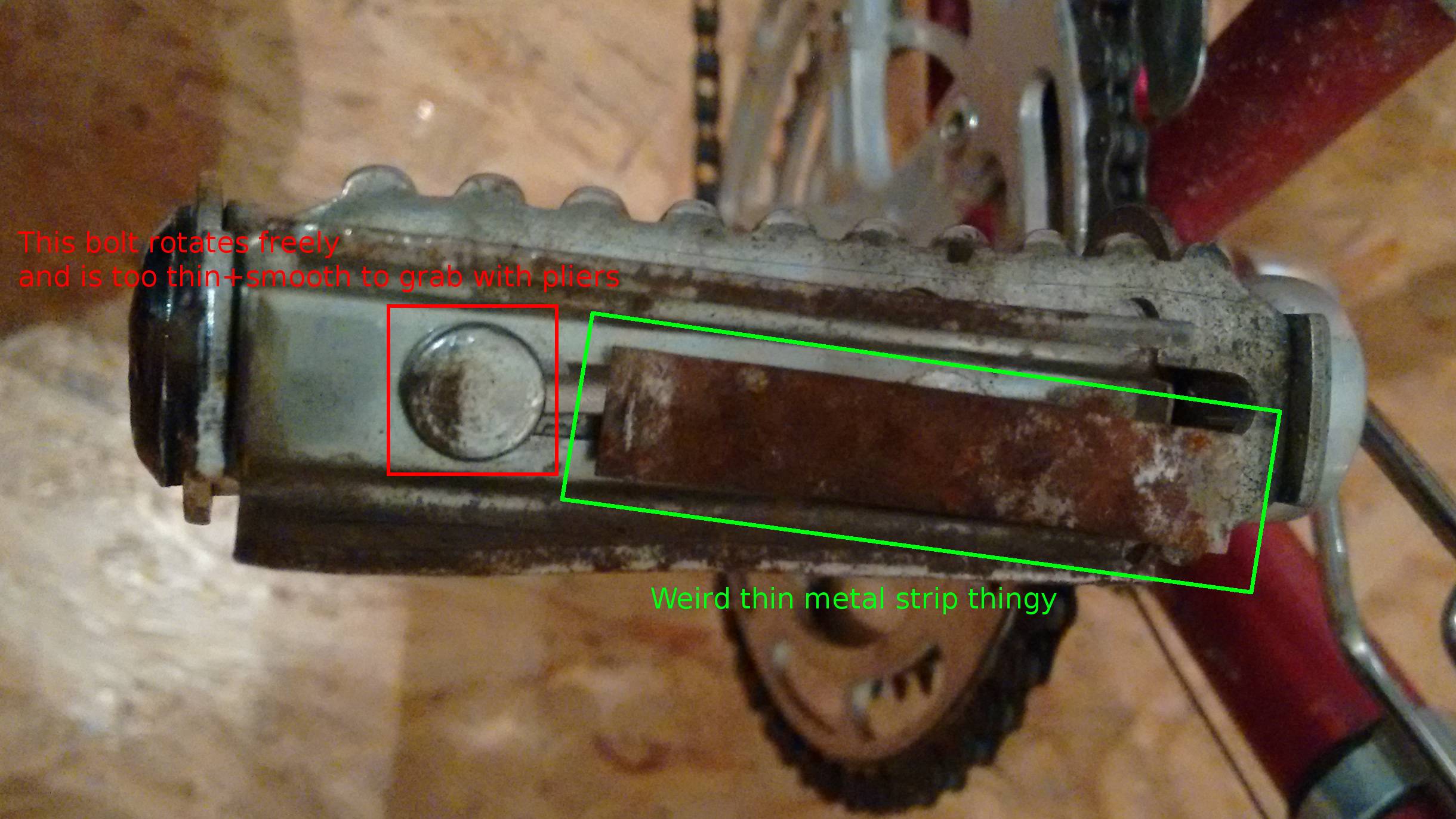 Additionally, when I removed the plastic reflector from its metal housing (which I'm trying to remove), a rusty thin strip of metal fell out (highlighted in green in the photo); Is this possibly some clue to removing the bolt?-- I had no problems removing the bolts on the other pedal, but I'm unsure of the internal "configuration" of the reflector, i.e. if the other reflectors on the other pedal also have this weird metal strip thing. However, I'm reluctant to remove the other reflectors to check because whenever I take anything off of this bike, there is a very good chance that it'll break in the process and I won't be able to get it back on.

I expect that when you try to turn the nut you'll rind that the round bolt head is eccentric on the bolt. Side on it looks like the sketch below, and means the bolt won't rotate once it's in the hole.

This is quite old school, and they're very easy to manufacture with only fairly basic hand tools. Imagine trying to cut a hexagonal hole into a pedal using only a drill and file.

You might succeed with a screw extractor. If you can drill into the head, this will give you purchase. It depends on how hard the bolt head is. I recommend center punching before drilling. Some penetrating oil on the threads might help as well.

Not the answer you're looking for? Browse other questions tagged road-bike repair parts pedals vintage or ask your own question.

6
How to get enough leverage to remove pedals when their cranks are not attached to a bike?
4
How to remove broken bolt in Chain Tug?
2
loose brake calipers
5
Replacing a chainring - what did I do wrong?
2
Disassembling crank on a 2006 Trek Pilot 2.1
2
Metal sheet inside bottom bracket on frame: can I remove it?
4
Can't remove 6mm hex pedal
3
How to remove the fork off this Peugeot Nouveau
3
Old Motobecane pedals without bolt on axle - How to remove?