A long time ago, when I was younger and stupider, I decided to fix my creaking crank arm by welding the bolt. Yes, I know it was so damn stupid, but I thought that was the problem. I didn't use the bike and welding the bolt didn't even fix my problem. So now I need to fix my bike, but I have no idea how to take off that pedal. I thought of cutting the whole arm off on the bottom bracket with a grinder, but I actually have no idea if that would work. I don't really care if I need to replace the bottom bracket, I just want to know if it would come off without many problems. I know that I will need to buy a new crank arm, because the one I have currently is almost broken.

TL; DR Any suggestions on how to remove a crank arm that has the bolt welded and can't be taken off with a normal tool? 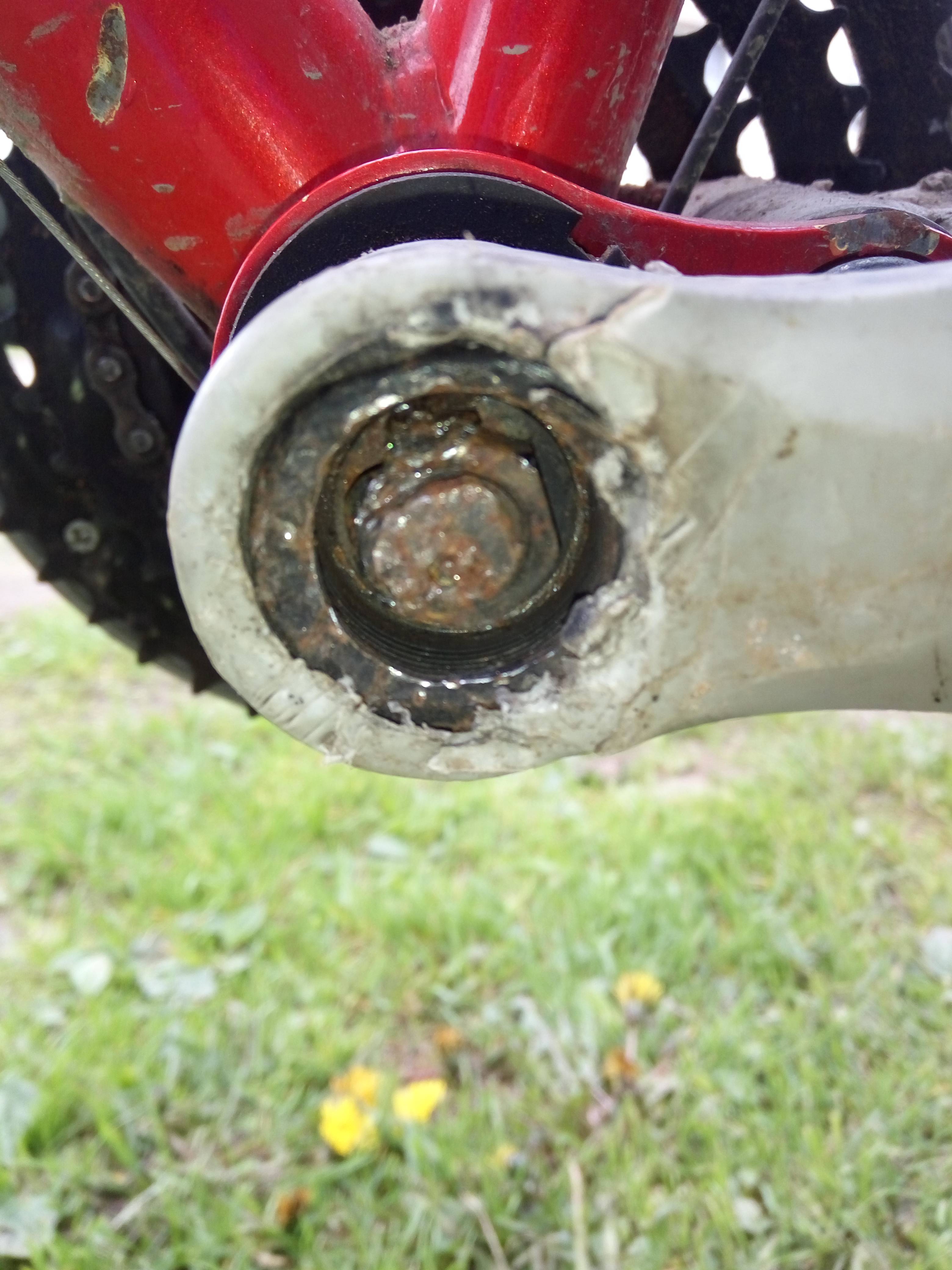 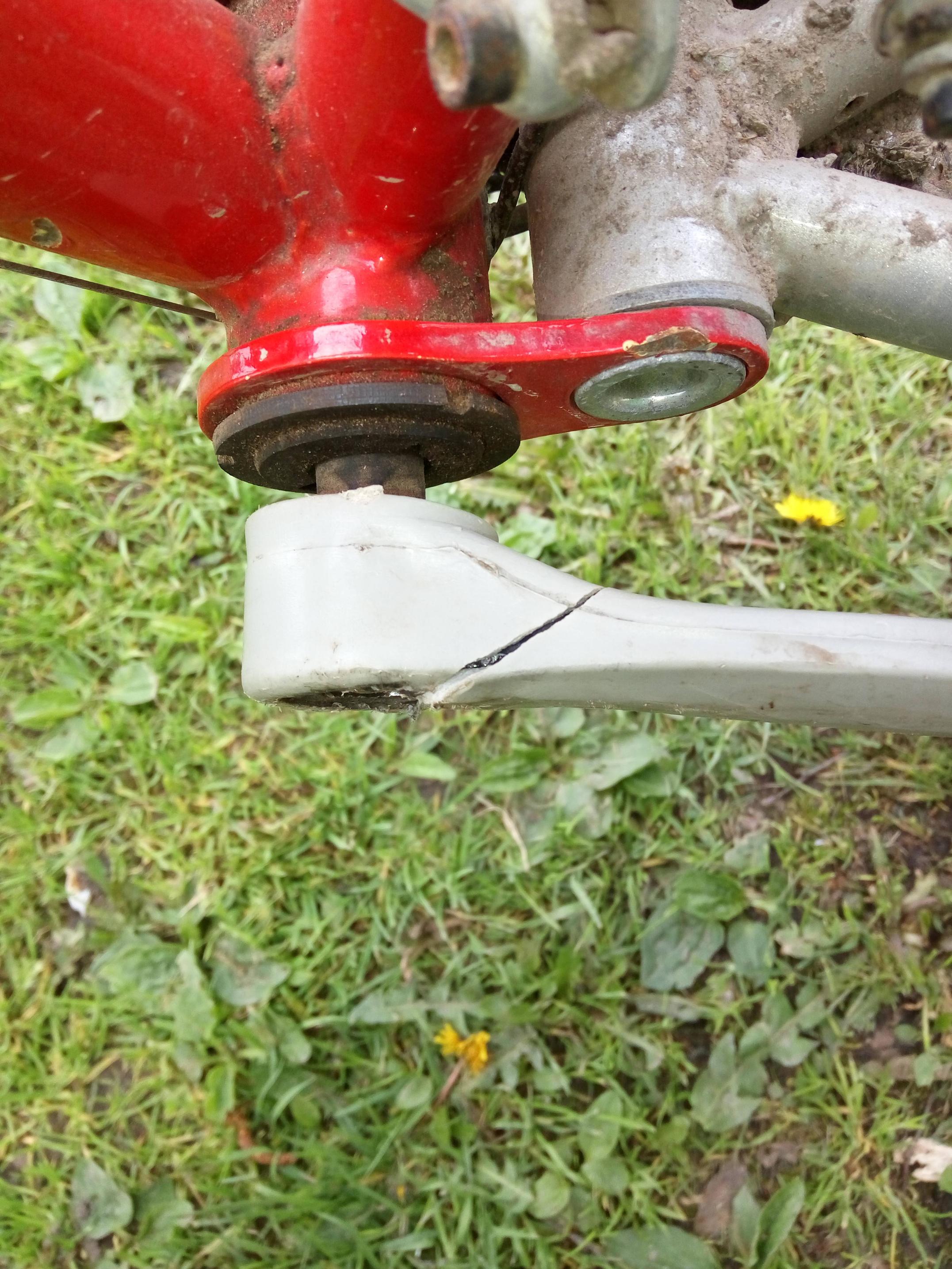 crankset bottom-bracket
Share
Improve this question
edited May 20 '16 at 14:32

The core problem is that you need the thread on the bottom bracket axle to attach the new crank, and that will have probably been damaged by your welding. If you can get the bolt out after unwelding, it might be possible to keep the current BB. 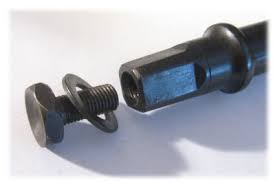 If your BB is this style, you might be able to cut the crank off, leaving enough of the bolt to weld on a small arm that will allow you to twist it out of the BB shaft. I would make cuts like this diagram, depending on which crank is affected - the one with the spider and chainrings is more tricky. I think you're trying for two things. First, if you can cut the weld and then cut the crank so it comes off the bike you win. If not, cutting it so you can remove the bolt then slide the crank off is also a win. Cutting into the axle means you lose, so the cuts shown try to avoid that. The middle diagram is supposed to be a sketch of a side view showing my guess as to how you'll need to cut the bolt head & weld off. Assuming you didn't just fill the whole bolt cavity with molten metal... in which case you're probably overheated the BB axle and you lose. 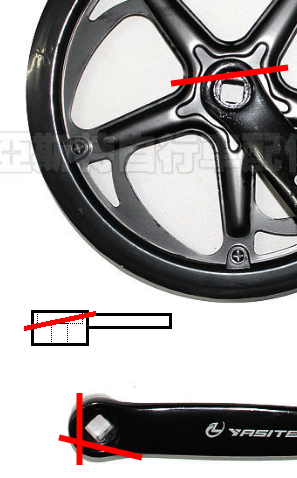 If you're unlucky you will have welded the bolt or crank to the shaft of the BB, and in that case you lose - you need a new BB as well as a new crank.

You will do much better with a 100mm/4" cutting disk (or bigger) than trying to do this with a Dremel or similar "rotary tool". I wouyld also use a thick cutting disk (3mm or 1/8") rather than a thin one, because you are likely to stress the disk a bit with the fiddly angles. But a 200mm/8" grinder is probably too big.

Also, try to mount the crank solidly - if you get the bike frame horizontal you should be able to put the non-welded crank into a a vice. That way the bit you're cutting is fixed, even if the bike can move a little around it.

Edit: seeing the new pictures, it looks as though you have an older style bottom bracket that has nuts rather than bolts. Like the one below: 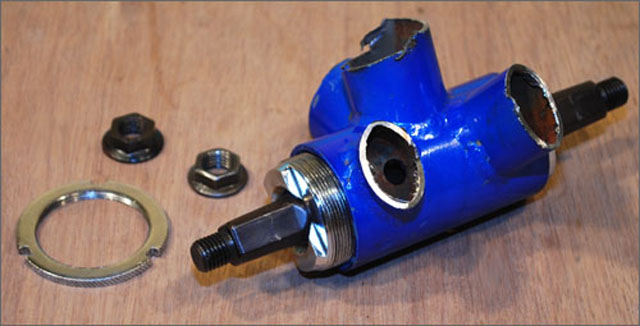 That means you have welded the threaded part of the bottom bracket axle, so that is now junk. Since you need a new bottom bracket, like Suspended User says just cut the shaft (on the red arrow below) and bin the parts. Get a new crankset and matching BB, plus the tools to install them. 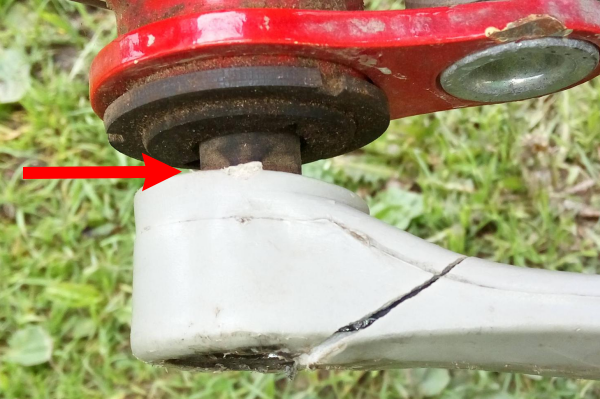 Based on your photos, take the other crank arm off, pull the whole bottom axle unit out attached to the welded side. and fit a new cartridge bottom bracket. Cost is not small but its not huge either - certainly cheaper than cranks. Cup and cone bottom brackets are old tech, and cartridges are far superior.

If you're lucky, you can now work on unmounting the axle from the crank, but in the comfort of a vise rather than on the bike. If this fails, then you will have to source replacement cranks, either new or used.

19
How to remove a crank arm with stripped threads?
5
I can remove crank arms without a crank puller, is this a problem? I'm worried the crankarms might be loose
3
Bottom bracket creak
2
Disassembling crank on a 2006 Trek Pilot 2.1
2
Cause and diagnosis of wobbling crankset/chainring
1
Stripped out bottom bracket
3
What crank arm bolt is required here?
3
Worn out square taper bottom bracket spindle?
2
What is this crank and BB on this bike? And how do I take that sort of crank off?
10
Broken bottom bracket?