For a volunteer project biking with blind riders (NiewidomiNatandemach.pl), we've been partnered up and provided a tandem bike, that seems new enough and in good condition.

Unlike the guy behind me--about my same weight and pedaling strength--as the pilot in front I get to see the upcoming terrain and decide to gradually steer or shift gears (5-speed) before it is "felt" and becomes tactily intuitive.

I can't quite figure out why the timing chain(front) keeps dropping out of its front chainring, jamming to the right, between the teeth and disk separating the pedal. Almost always we have to come to a full stop and re-seat it by hand.

There is a sprocket 10-teeth wheel supporting the lower part of that chain, pulling it upwards. I had adjusted it higher & lower to test various tensions; often it too easily loses the chain.

The top part of that chain is nearly a straight line with little to no drooping. The whole configuration is thus (actual bike photo now...evidently wasn't clear enough that previous was just smth similar from Google Images): 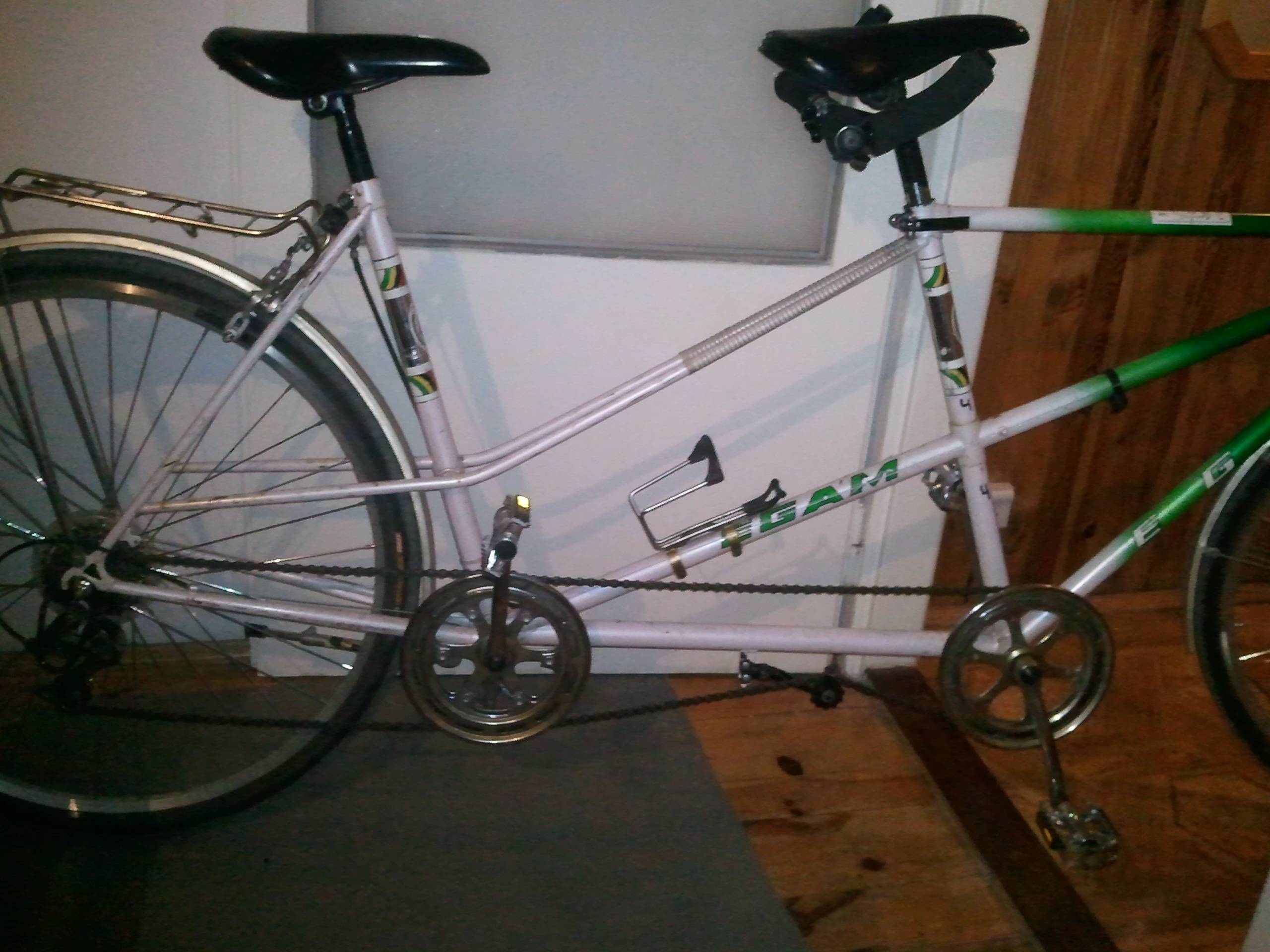 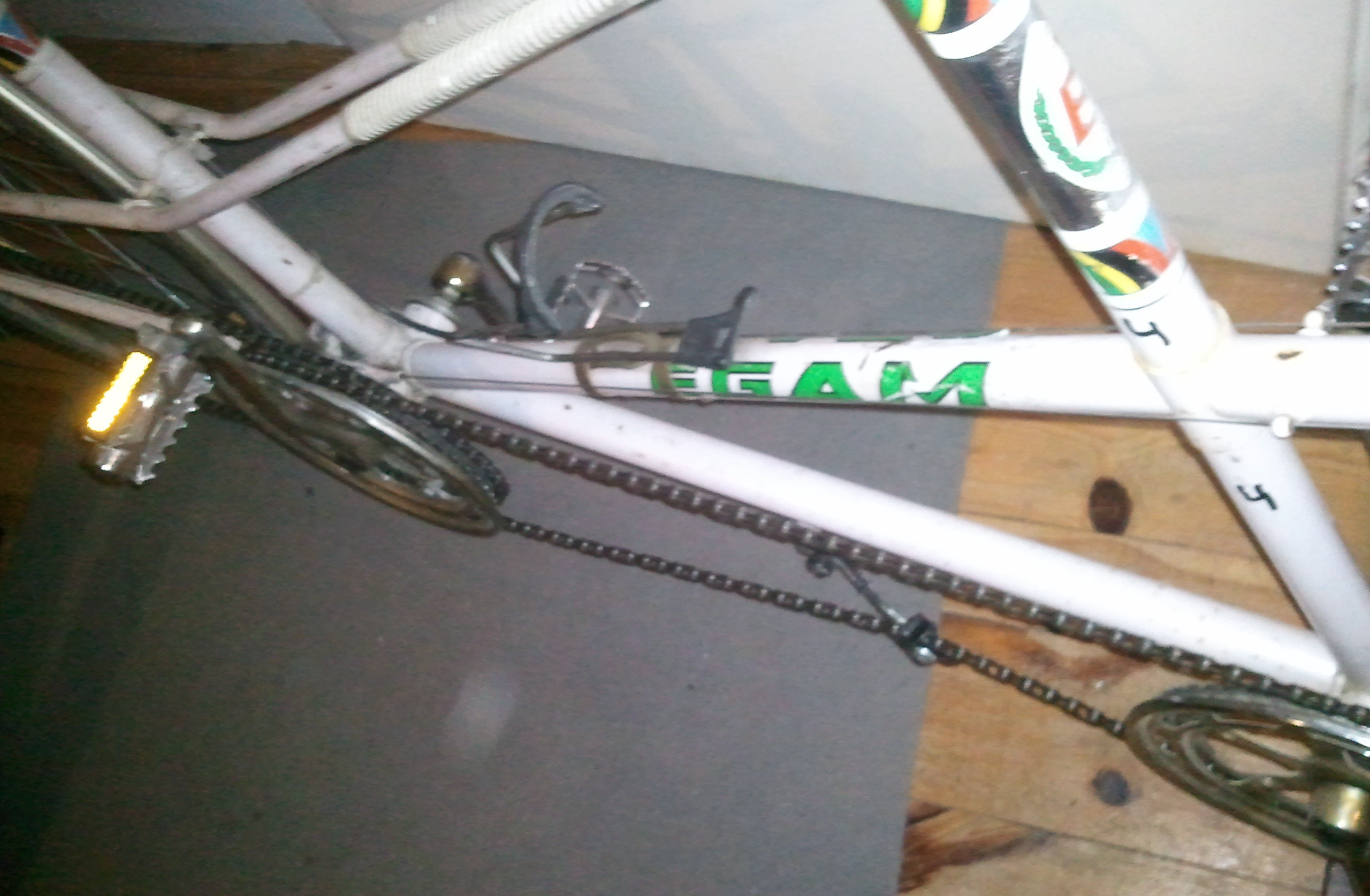 Other things tried that didn't seem to change much:

Local mechanics & standard bike shops in our small town happily mucked with it, but don't appear to know exactly and be able to remedy.

This band-aid at least kept us going pretty well the whole week: 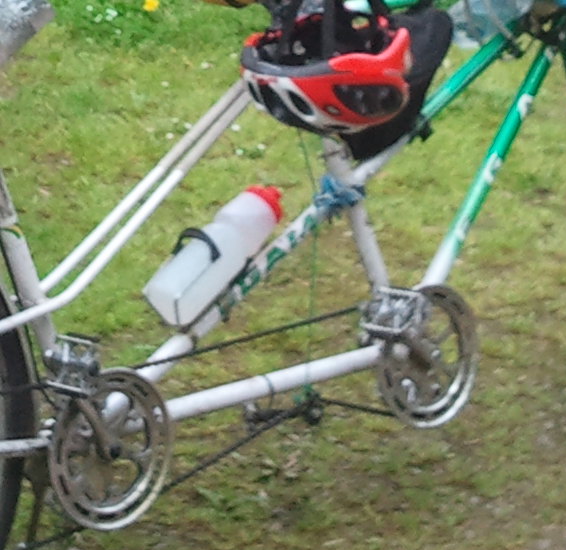 The strings/cables suspending the sprocket directly upwards added tension to supplement its thick spring/coil. Again, shortening the chain by even the minimum possible made it already too short to fit.

This answer has been significantly changed since being accepted because the accepted answer cannot be deleted.

Based on the new photo, your timing chain needs checking. Its quite uncommon to see both chains on the right side of the bike, but not impossible.

Do both timing chainrings have the same number of teeth, or do pedals go out of phase over distance ?

Are the chainrings in line? You might need a keeper on the front chainring - essentially a front derailleur mech that doesn't move.

Check for timing chain and chainring wear too - if its worn/elongated then fit a new 1/8" timing chain. Leave it too long and the chainrings will wear out as well.

1/8" chain will last much longer too, and will slip less because it doesn't flex left and right as much as normal 3/32" chain.

7
Single speed conversion chain keeps derailing rear cog under load?
8
How can I keep my chain from derailing from the front sprocket under load?
2
how to fix gear ring that over-jumps
6
Why is it called a "timing chain"
4
SRAM xx1 1 x 11 drive train very noisy
1
Chain keeps slipping
2
Chain skip happening seemingly at random with a new chain
2
How can I know the number of teeths I need to go uphill?
3
Chain jumping, unsure why
0
What is wrong with my bike? Where is this sound coming from?