Carry road bike inside an SUV

I'm in the process of getting a road bike. I already have a SUV with interior space large enough to carry a road bike. Worst case, I might have to remove the front tire and place it horizontally. Are there any problems in carrying a bike inside of an SUV by placing the bike horizontally?

There is no real problems other than things getting scratched or broken being shuffled around, derailleurs easily get caught on seat belts etc. There is however a very easy and affordable option to avoid this. (Assuming you have QR skewers)

Install a 2x4 or similar piece of wood. Then mount QR truck mounts to said 2x4. If you are going to be using your SUV to carry your bike very often this is the way to go if you don't want to spend the money on a roof or trunk rack. Generally, and depending on SUV make and model you can easily fit more than one bike using this method. 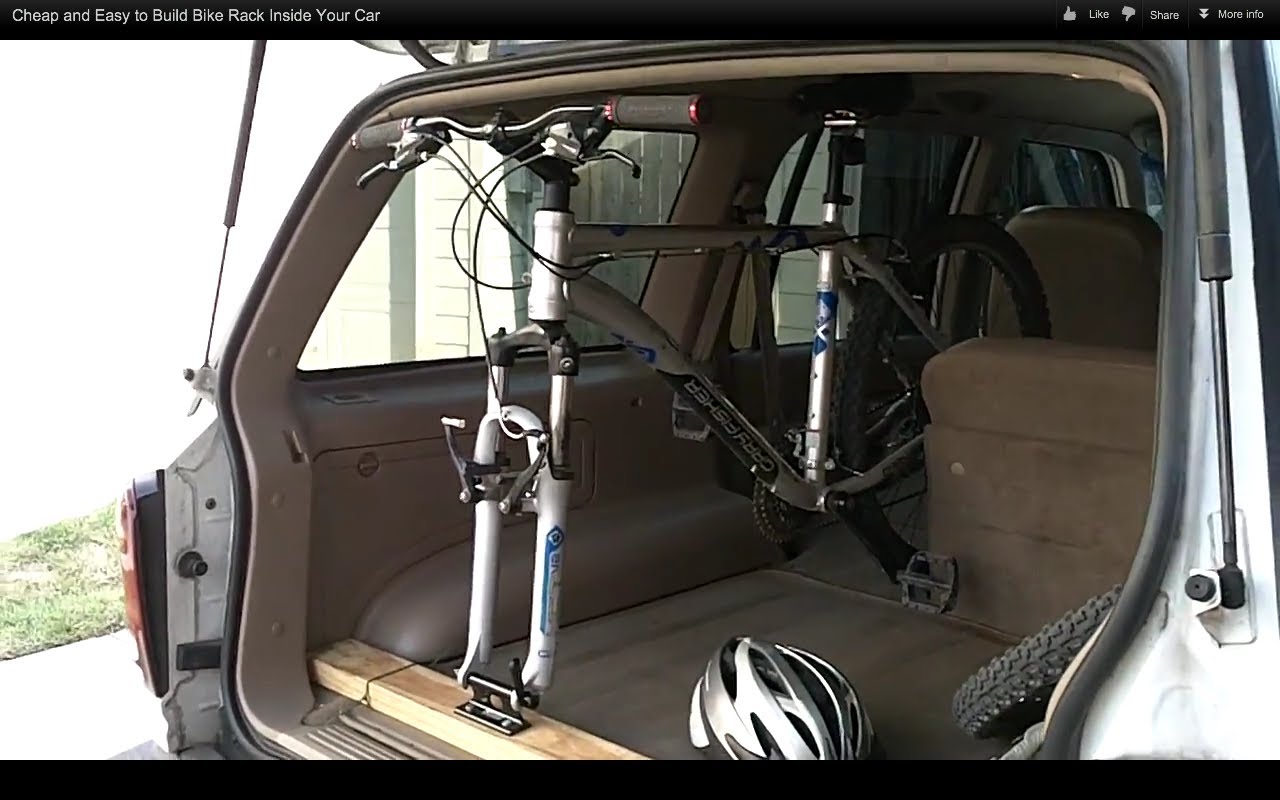 Not really, just be careful.

For example, you don't want the derailleur to hit the door or something when getting it in or out. You also don't really want to stack things on top of the bike, especially if you have no wheel in (e.g. at the fork).

That being said, getting a bike in and out of a vehicle can be inconvenient, plus, it can get your car dirty. Racks are nice for this, but its much easier to steal a bike off a rack than it is to steal one from inside a car.

If your bike has disk brakes and you remove the wheels, insert a spacer between the brake pads for transportation.

Additionally, if your brakes are not properly bled and have air in the brake fluid reservoir, transporting your bike horizontally might get the air into the brake and reduce the brake's performance. However, this should not be an issue for a properly serviced bike.

I used to transport my bikes inside a car a bit smaller than a SUV. Although they where mountain bikes rather than road bikes.

I used to tip down the rear seats and lay the bike horizontally. The car was just big enough to allow a full suspension 26" bike. When putting two bikes I removed the front wheel and separated the bikes with a car tire inner tube, inflated just enough. That prevented one bike damaging the other. Two bikes was the usual limit, but even three where fitted in case of emergencies.

The benefits of taking the bike inside the car are: 1) the bikes won't get the road dirt and grime (the one that tires of other cars launch at yours), which can be harder to clean off. 2) It's not obvious that you are carrying bikes, so bike thieves are less attracted to your car 3) The car keeps its external size so parking in tight spots, entering the garage or using a drive thru is less of a hassle than with a external rack (rear or roof).

Disadvantages are: 1) High possibility of damaging or staining the inside of your car (scratches and oil in the seats, carpeting, seat belts, etc) 2) It is kind of awkward to get the bike in and out, specially without help, you may eventually get tired of it.

A single bike is less likely to get damaged inside your car (the bike is more likely to damage the car). Two or more bikes are really prone to damage one another.

Bottom line is: for a few times, if you plan to only do it once in a while or just meanwhile you get a proper rack (either bought or DIY) and for a single bike it is perfectly fine co carry the bike inside the car. Just be careful and be prepared to perform a quick clean of the bike after the ride before taking it inside the car again. (Thinking of mud and dirt in the frame collected during the ride)

But for repeated transportation of the bike, it is really worthy getting a proper rack, either external or internal.

28
Am I too heavy for my road bike tires?
7
How is cornering on the road different than cornering on dirt?
1
Tools and spares needed to repair a chain on the road
3
Road bike tires that are ok on sand
1
How to remove pedal bolt with round, smooth head
0
Differences between starting a road bike vs a mountain bike?
12
How can I make road-bike rims survive tree roots on trails?