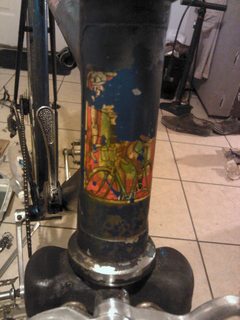 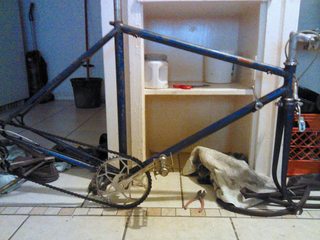 I've sent emails, taken the bike to more shops than most will see in a lifetime and have strained my eyeballs to no end looking through google images in an attempt to give my daily a proper id. Here's what we know:

Has anyone ever seen one of these bikes? Does anyone know what company or manufacturer made this bike?

The graphics looks similar to a '61 Dynamax TDF edition, made by Motobecane for the Canadian market. Could be a different model year maybe? 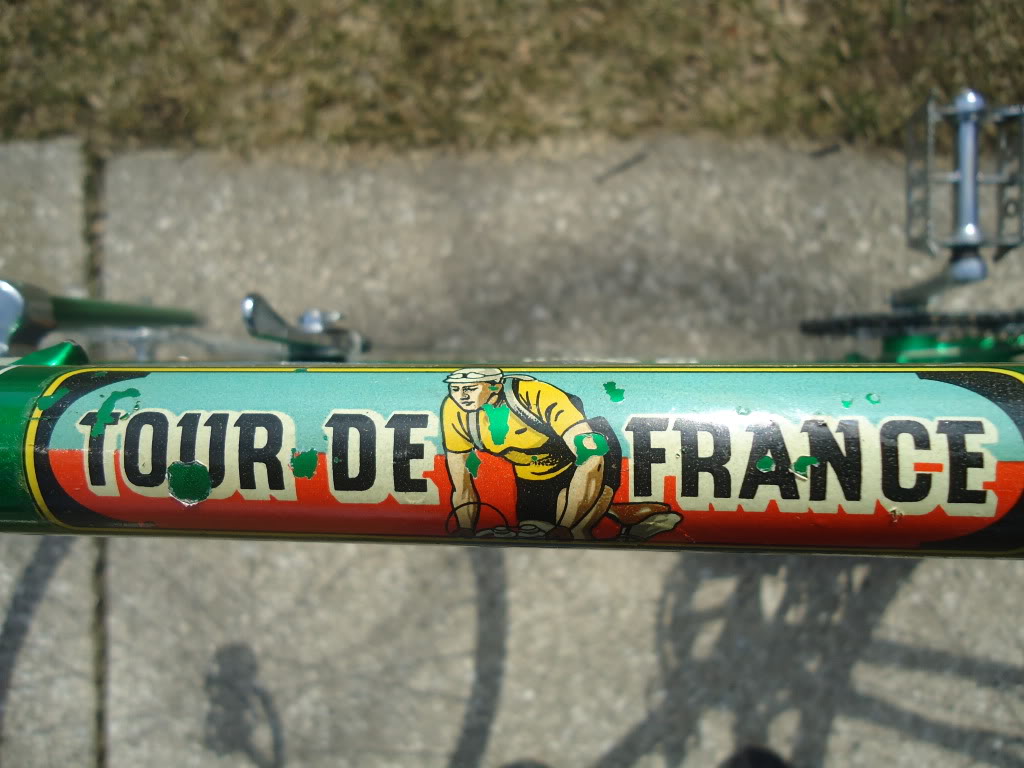 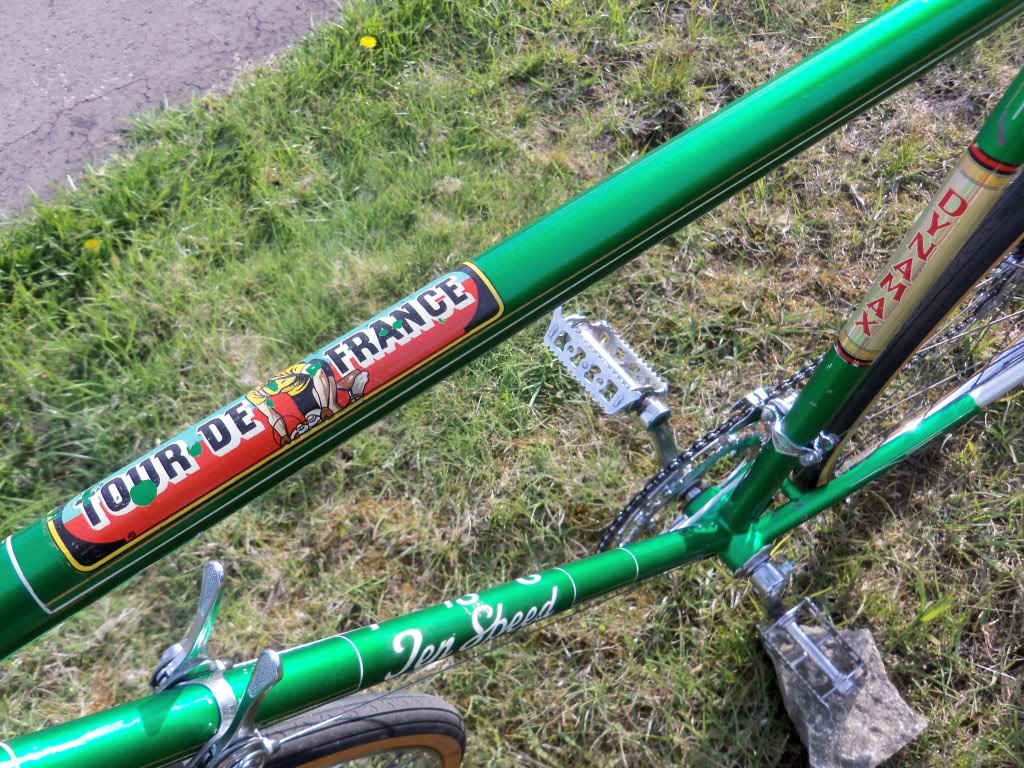 Either way its pretty awesome!

Answer: Its a 1970s french racing bike in steel. I see

Ride it, clean it, lube it, service it, and care for it.

The only upgrade I might recommend is to fit modern brake pads, because the newer compounds work better than the old black blocks. If you're refurbishing it, throw away the old cable inner and outers and fit new ones for brakes and gears.

You're unlikely to find 27" wheels anymore, but a 700c wheel is close enough. The front brake I can see looks to have a lot of open slot below the nut, so you'll get the extra 4-6mm needed for a modern front wheel. Rear wheel is harder, because 5 speed cassettes are getting uncommon. You might end up rebuilding the existing rear hub into a new rim with new spokes. When 27" tyres become hard to find, this may be your only answer.

100% sure this was made by Motobecane. It looks exactly like my 1974 M. Grand Touring -- the frame, fork, headset, and bottom bracket are identical; even the frame color is the same. And the pedals are the same, too.

Search for Motobecane Grand Touring on ebay for photos (I don't have mine any more). If I looked only at the second photo (except for the sprocket) I would have said it was the 10 speed Grand Touring...

One of the reasons I bought the Grand Touring was for the steel, cottered crankset (by Nervar). The aluminum ones back then were soft and not considered to be as rugged or reliable. It had what they called a 1040 or 1020 (or something like that) frame. It wasn't light, but was great on steep hills -- had just the perfect stiffness to transfer all your energy. Newer bikes seem like "wet noodles" when it comes to really steep hill climbing.

1) The front fork is not bent, the rake looks exactly right to me.

2) The crank arms are extra long. When I first got my M.G.T (first few days) I hit the ground with one of the pedals while turning a corner, fell and had to have the front wheel re-built. Be careful when riding yours. 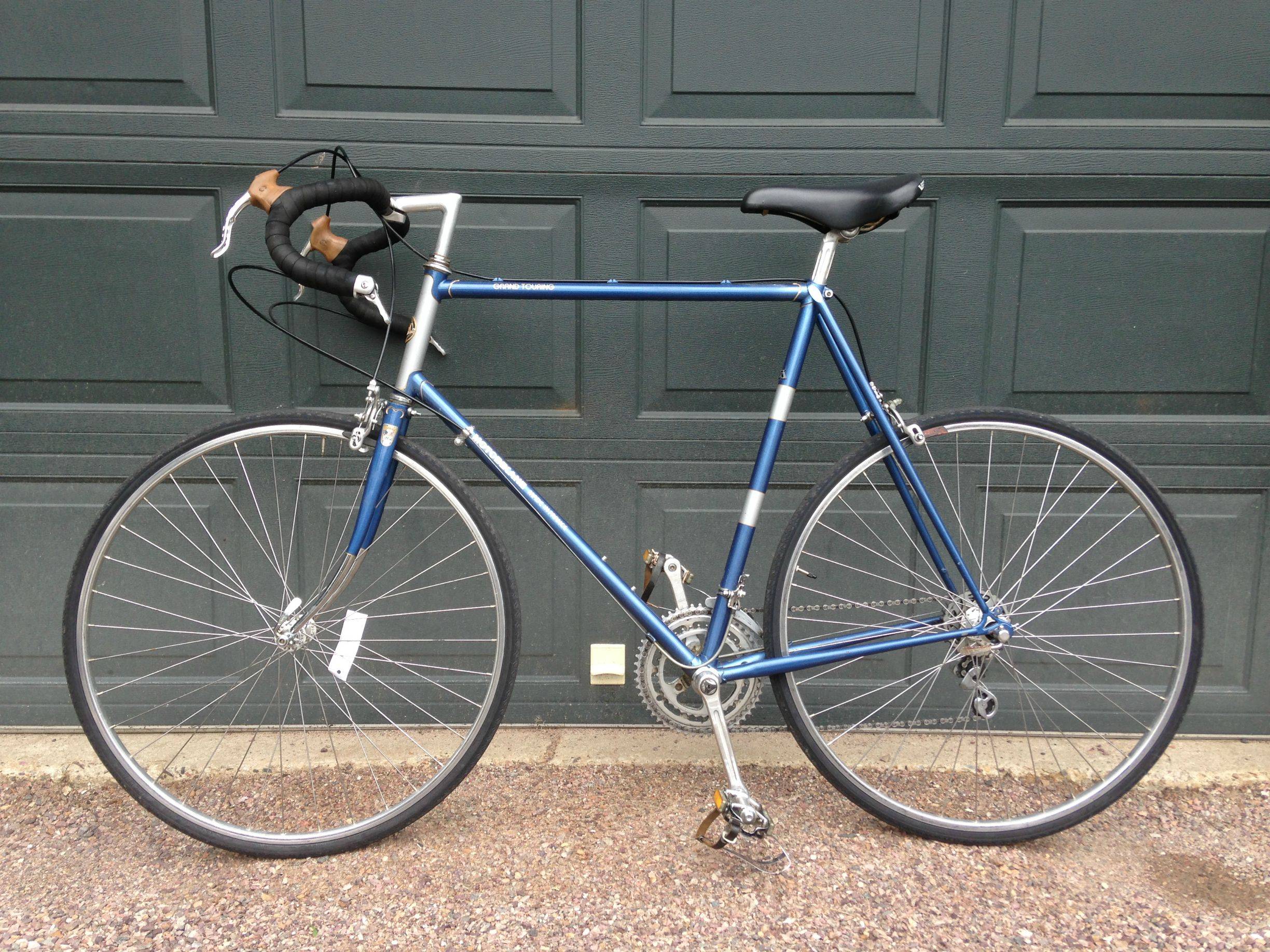 1970's wanna-be-a-racer French bike. That looks like Huret's cheapest rear derailleur. To ride it, you'd want to replace the headset and fork. Why fix up a cheap bike? If you're really considering it, at least remove the cotters and open up the French threaded bottom bracket to see if the cups are pitted. Spindle also. If they're not smooth - if there's pitting - I think you should look for a period French bike in better condition.

2
What Brand of Bicycle do I have?
5
Knowing what bicycle frame material I have
0
Does anyone have any special notes on buying pannier racks?
1
Can anyone identify the model/year of this Montgomery Ward bicycle?
6
Can anyone help me identify this vintage road frame that has been repainted?
3
Does anyone know what brand and model is the bicycle in photo?