Should I ask for my money back - crack in Titanium frame

About 2 years ago I got my new bike - an Enigma Ti bike. The frame was customised for Di2 and I had hydraulic disk brakes fitted. An expensive bit of kit that was supposed to last forever and make my commutes a pleasure. I love the bike, it's fantastic but yesterday I found this: 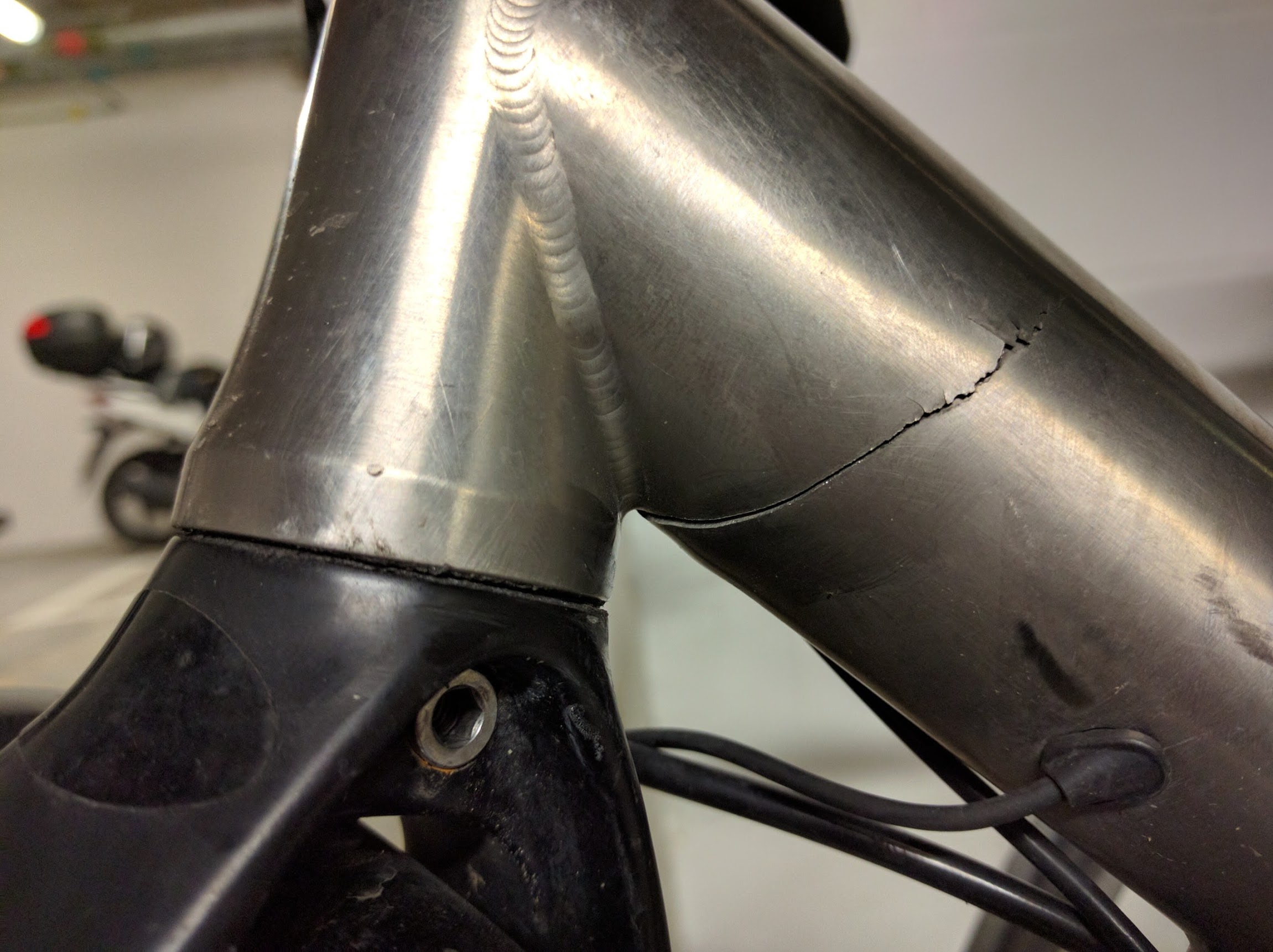 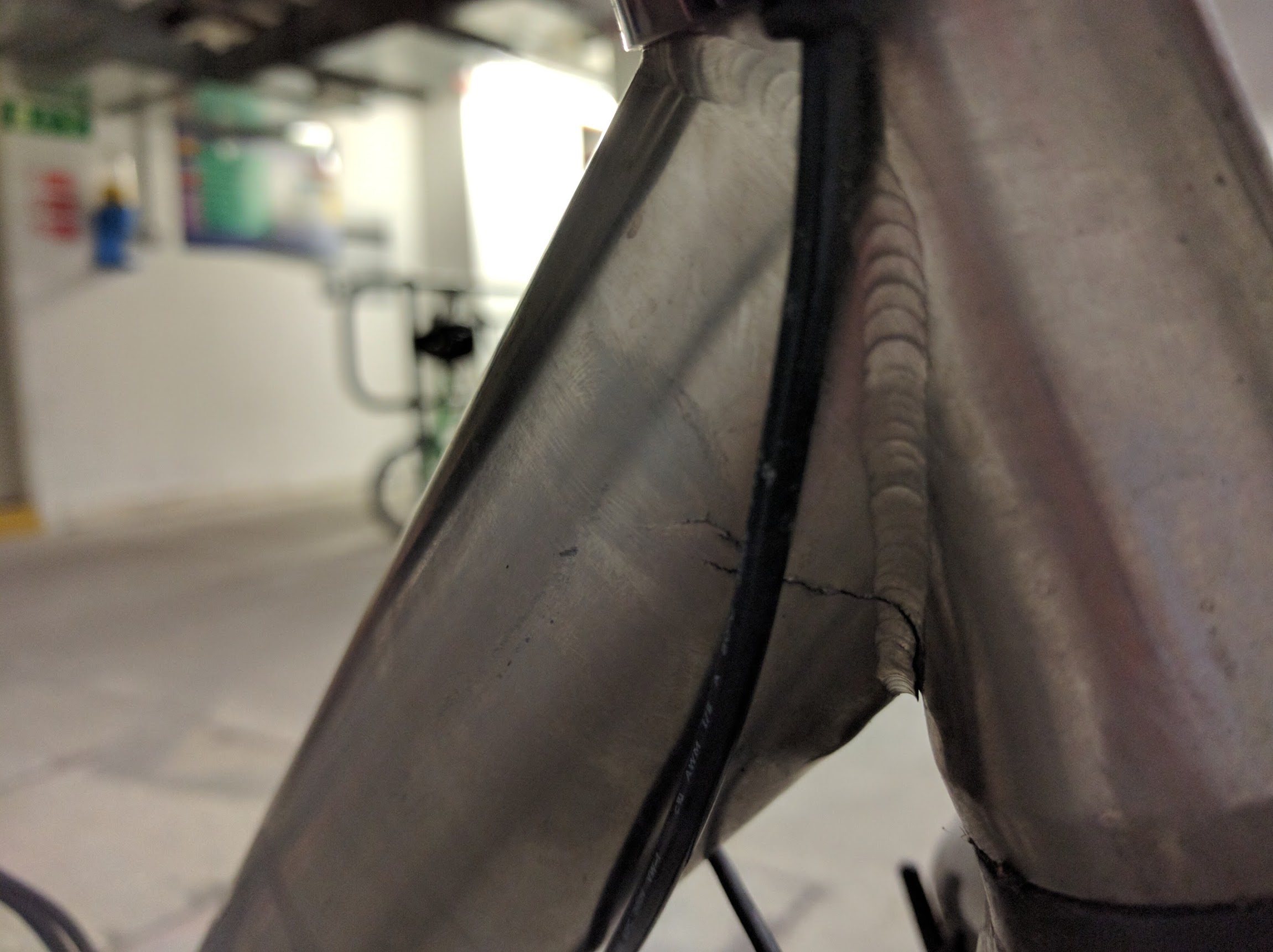 When the guy at the bike shop (not the one I bought it from) saw it he said I was very lucky it hadn't given way. I had been hearing very worrying noises when applying power. My 18 mile ride home through London was done VERY carefully.

So my question is should I accept a replacement frame or should I ask for my money back? This bike was about £5500 and I've done around 9,500 miles on it in 2 years. What is to say that this won't happen again and I'll end up under a bus?

I am a heavy guy - hovering between about 16 and 18 stone over the last 2 years but surely a Ti frame should be able to cope with that?

If I do decide to get a replacement what should I reasonably expect the bike shop to do about me not having a bike in the meantime. It's likely to be several weeks if not months to get me a new bike. In that time I expect to have a bike to do 180 miles (290 km) commuting on a week and I have long rides like the Ride London 100.

I do have my old £500 bike but I'm probably going to have to spend a fair amount of money servicing it to get it usable again.

I had a Trek which broke entirely through in the same place. Turned out it was still ridable, and I managed to carefully ride it the 6 miles home. The frame was several years old, had seen some heavy use, and the frame, forks and handlebars were pretty much the only original parts. I took it back to my local Trek dealer, and after a bit of debate they contacted the Trek rep and they agreed to replace the entire bike! Good work Trek.

Anyway, I'd certainly take your frame back. They should replace the frame and rebuild the bike for you. I doubt they will provide something for you to ride in the mean time though.

As you're in the UK, the Consumer Rights Act applies. It would seem that a £5,500 bike that lasts less than two years isn't of "satisfactory quality", but I would be surprised if the shop simply gave you a refund. I think you have to give them at least one attempt at repairing the frame (I don't know how feasible that is for titanium), and take it from there. If you can, I'd talk to the Citizens Advice Bureau and/or Trading Standards if the shop gets difficult. All this will be easier if you have proof of purchase, of course.

If I were you, I would want a refund, but would settle for a high-quality repair (and if it failed again in less than several years, I'd want the cash back).

I know this is a bit of an old post now but... Titanium Frames are, alas, renowned for failure regardless of the price. You may be lucky and go a lifetime without issue or, like yourself (and I) have a frame failure. The good thing with Enigma is they offer a ten year warranty on all their frames. This is not a bike shop problem, especially after 2 years. Contact Enigma directly, ask for a replacement. A repair will never be as good or as pretty, particularly in that area.

Not the answer you're looking for? Browse other questions tagged frames titanium crack or ask your own question.

5
Experience with welding Titanium frame?
24
I keep breaking my road frames - why?
3
Is a custom road frame worthwhile?
1
May I ignore the frame damage (or should I get a budget carbon frame)
4
What are the advantages of a custom frame for a touring bike?
9
Titanium frame has a crack - advice needed
1
Crack on Carbon Frame?
5
Dent in titanium MTB frame, is the frame OK to ride?
1
Specialized frame warranty - cracked Alu seat tube
4
Titanium frame crack