I'm trying to disassemble the crankset on my 2006 Trek Pilot 2.1; the bike has all OEM parts.

The crank is a Bontrager race crankset, which I'm to understand is a a rebranded Truvativ crank.

For a bottom bracket, it uses an SRAM Giga X Pipe (GXP).

The crank is a two-piece press-fit: it's a hollow tube press fit into the drive side, with ISIS splines on the non-drive side.

I've unscrewed the GXP bearing cups and removed the crank from the frame, but there's this one last little component on the crank spindle that's keeping me from removing the rest of the GXP bottom bracket. I want to know how I should remove it so that I don't damage the spindle. I'm not sure what the part is, or if I'll need it for installing the new GXP bottom bracket.

Here's a shot showing the crank, spindle, and GXP bottom bracket as it is right now: 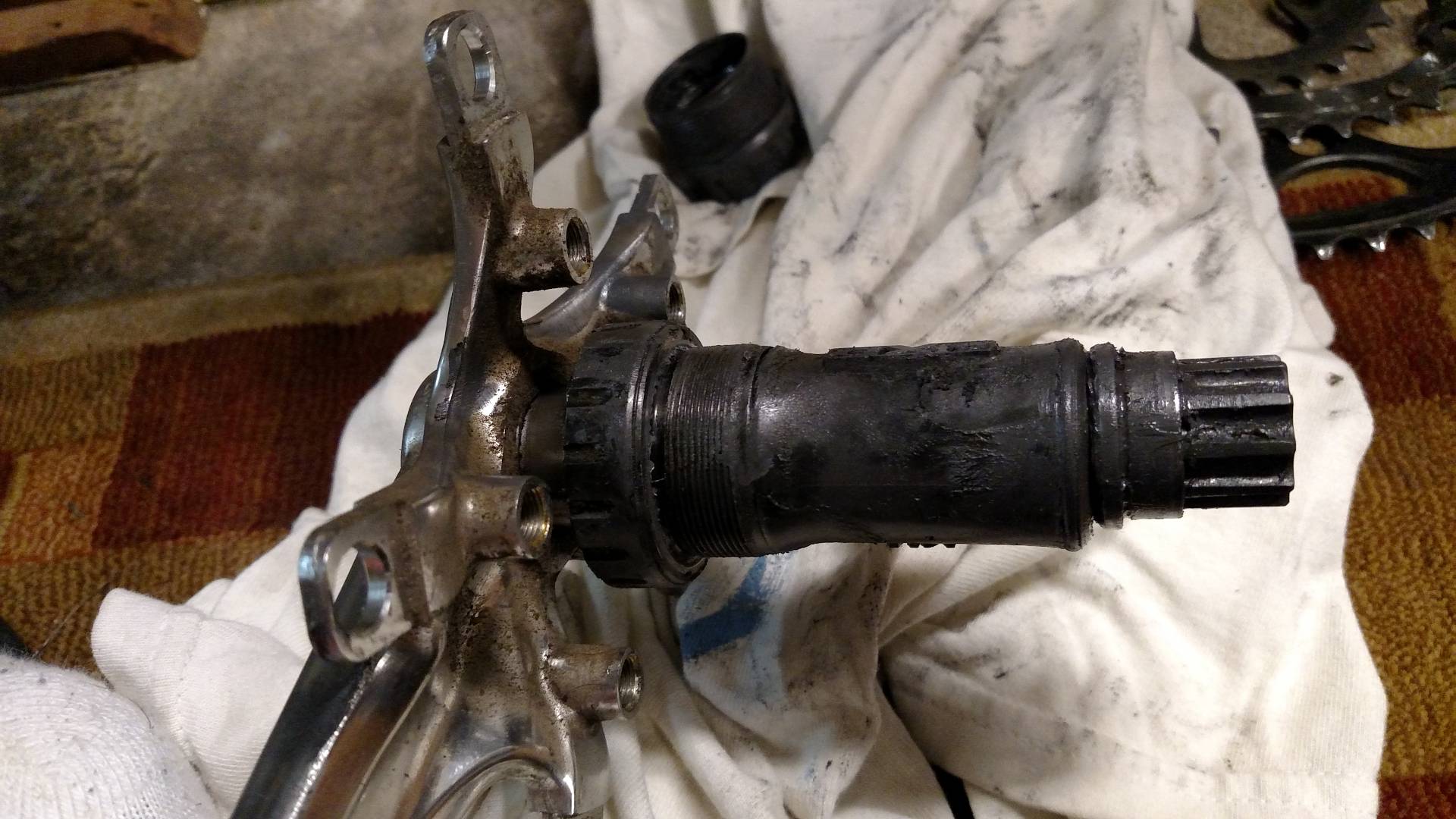 And here's a close-up of the spine, showing the bushing I can't get off: 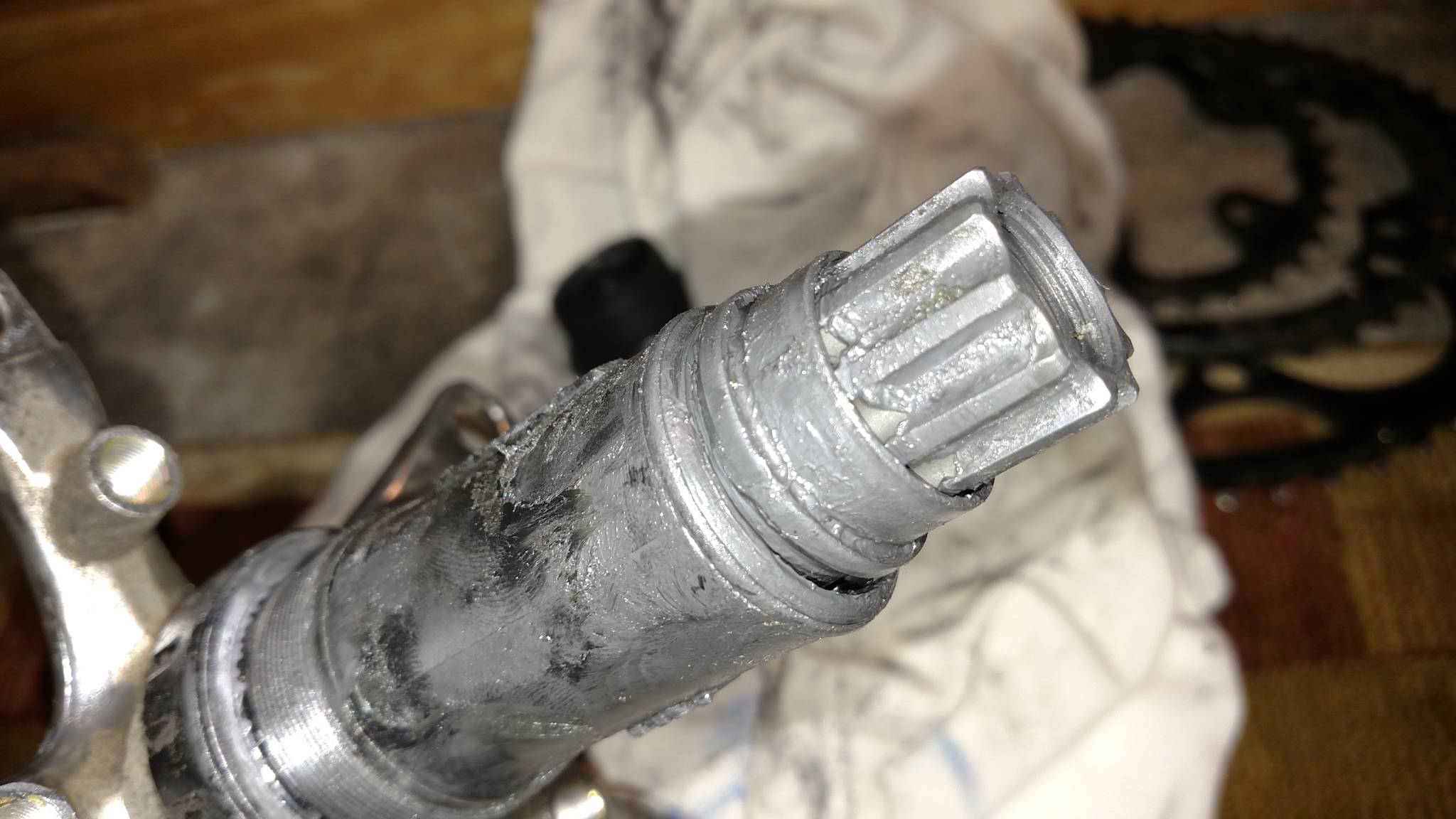 Yeah, I know it's a mess; that's why I'm trying to disassemble and clean everything and replace the GXP bottom bracket. That grease isn't grease anymore, it's more like metallic paste. Yuck.

I've already tried some light tap-work to try to get it off; it didn't budge, but I didn't go hard because I don't know if I'll damage it. Also, interestingly, it spins very freely in place.

If I don't need it, I plan on trying to tap it off with screwdriver and a hammer; if that doesn't work, then cut it in half and split it open.

Also, since a few other people I had asked had been confused about this - the drive side of the spindle is permanently press-fit into the drive side bracket / crank arm assembly, since it's all one piece. Here's a picture: 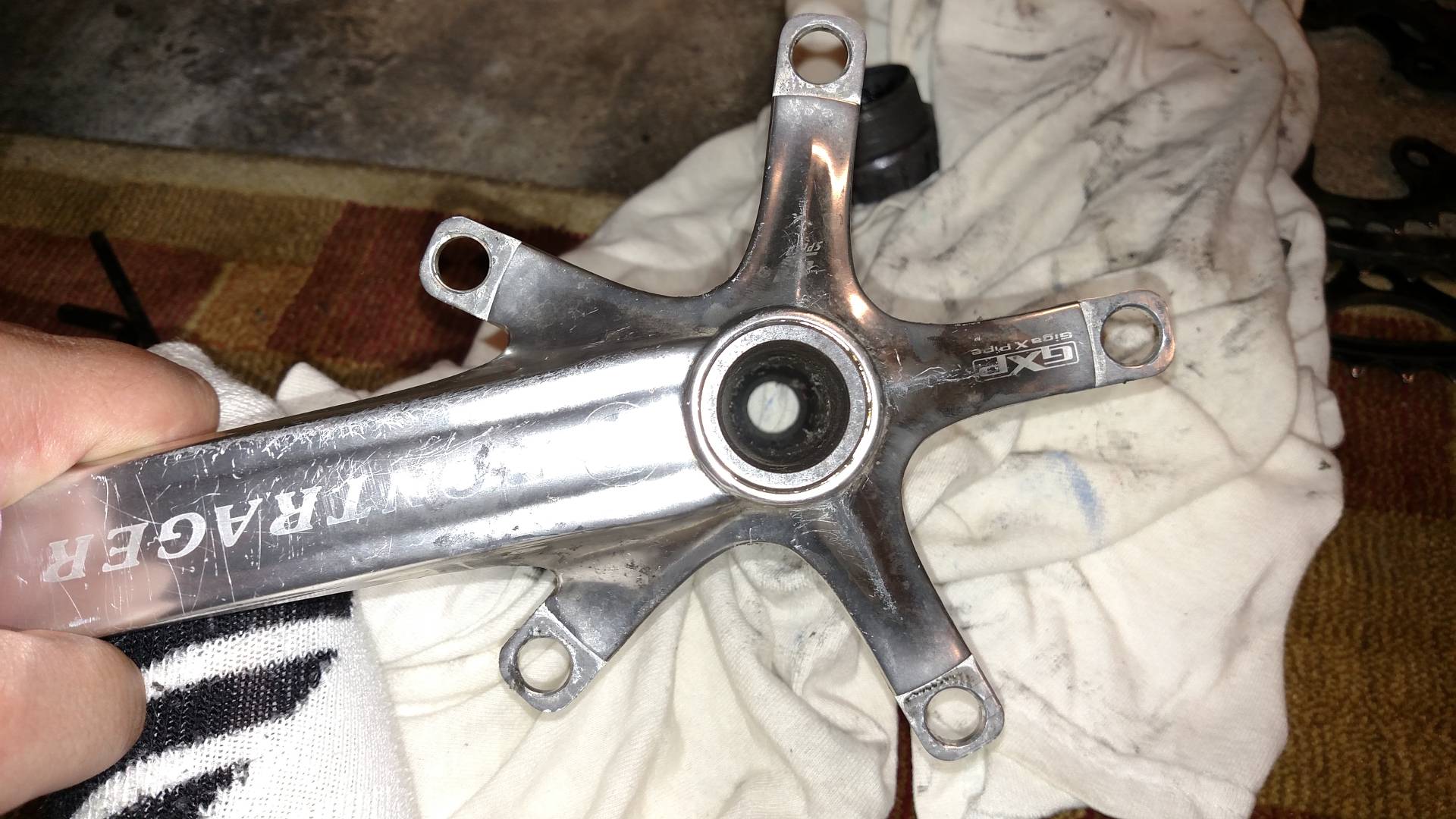 I had this exact issue come up at work today, with the same crank. It was quite frustrating! 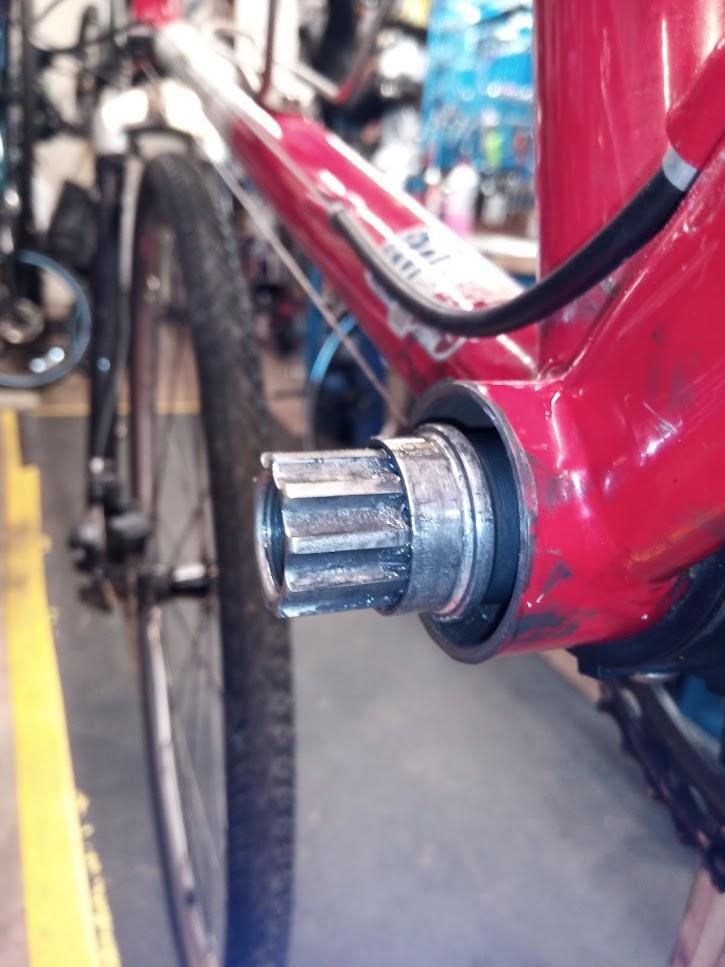 Unlike the OP, I tried progressively harder hammer smacks early on. And also unlike the OP, I was unable to punch or wedge the stuck spinning bushing piece off. The drive side cup on this bike was also somewhat corroded in place, so when I went to use an open-sided external BB wrench on it that I could fit over the spindle, the BB tool splines started getting badly mangled (this is an off-brand low-quality BB) and I decided to hold off on going further with that approach so that I could preserve the splines to use a broader engagement socket type tool on.

So, to get the spinning reducer bushing part off while it was still stuck on the spindle, here is what I did: 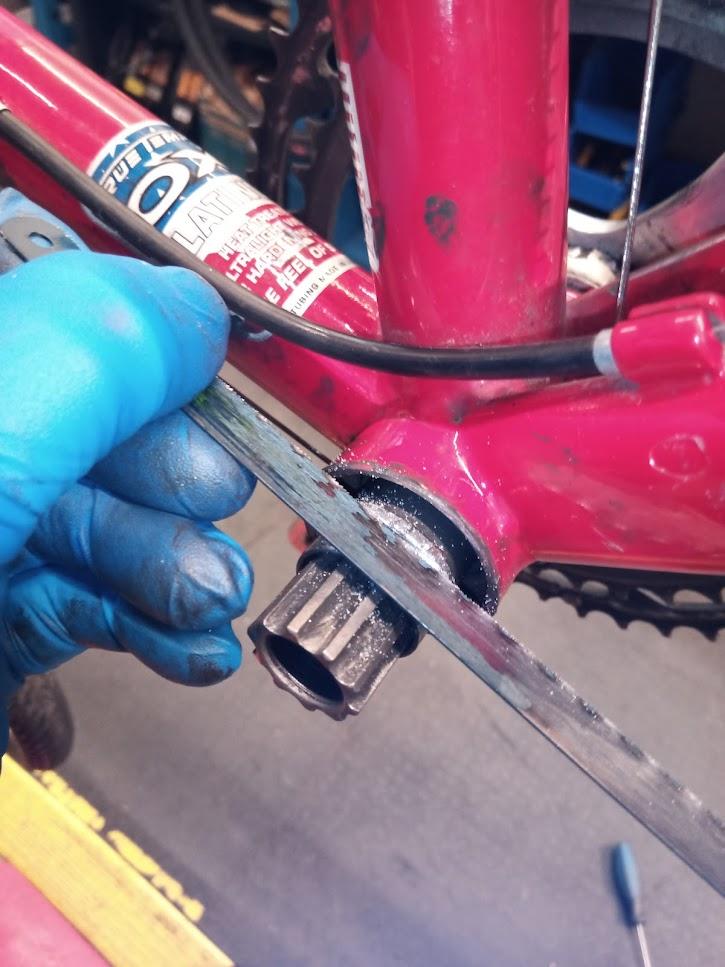 With medium-light pressure on a good 32tpi hacksaw blade held freehand, I very carefully cut across the part to remove the shoulder area in one section. Then I turned the blade and very carefully cut across the the surface of it diagonally. The bushing is aluminum and the spindle is hardened steel, so with light pressure it was harmless and easy to tell when the blade started making it through, because the teeth skitter across rather than bite. I didn't try to cut all the way through. Instead I cut a slot almost all the way through, then put a big screwdriver in and twisted to break the piece apart: 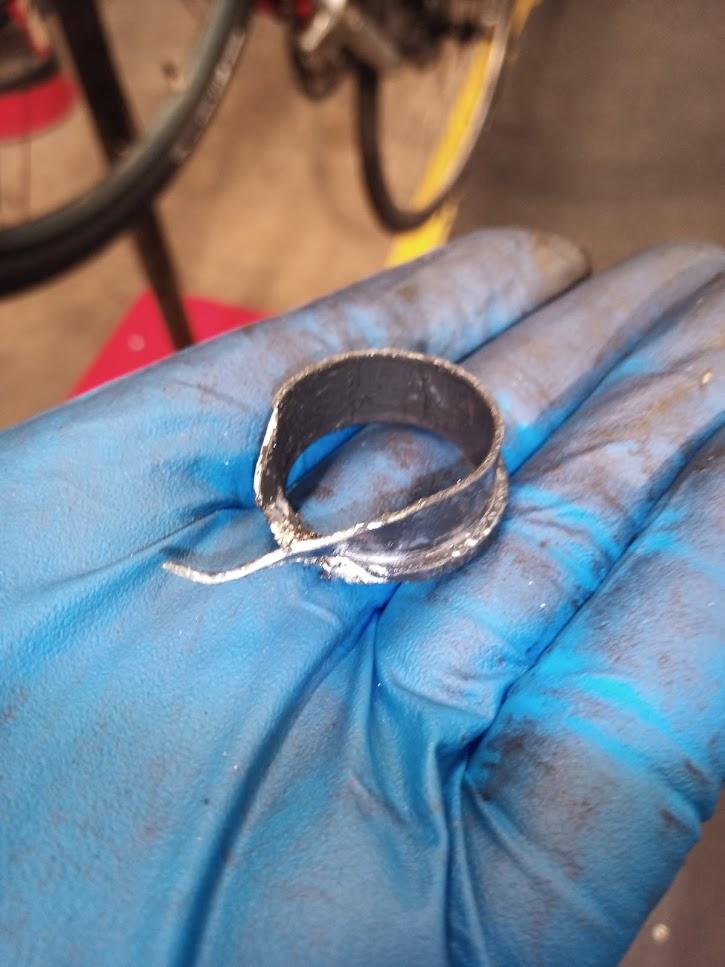 After that the crank slid right out. What I didn't want to do was use a Dremel cut-off wheel on the bushing, although it was tempting, because any snags could easily have sent it into the face of the BB shell, and avoiding damaging the spindle would also be more precarious.

I am able to say with moderate confidence what is causing this issue. Here is the removed spindle. This crank and BB apparently licensed the GXP design, but neither are Truvativ/SRAM products. The spindle is trying to be a normal GXP spindle, but right at the area where the 24mm section steps down to 22mm, there's a recess all the way around that I believe is not present on a Truvativ/SRAM crank, or at least not as pronounced: 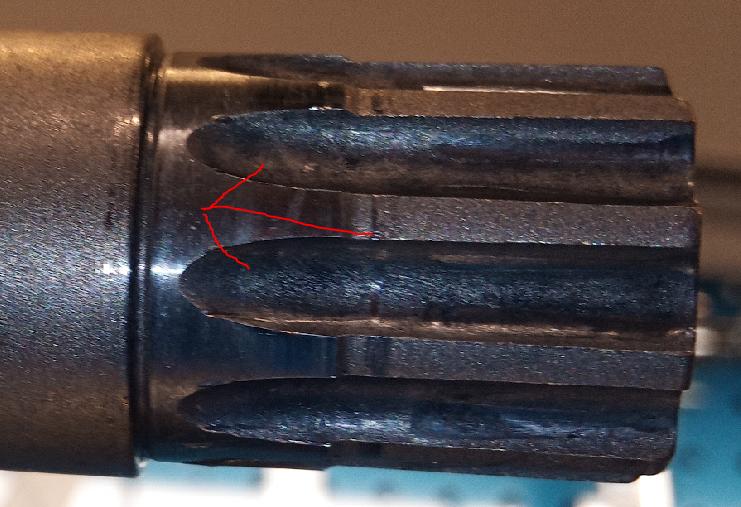 I couldn't get a good picture of it, but the bushing part has a small corresponding lip. When I finally got the bushing off, it did so with a metallic pop that I hadn't heard over the previous hour of dealing with it. I believe what's happening with this entire issue is that when these particular early external cranks and BBs were assembled, the crank probably needed some force and lubrication to pop through, but the end of the spindle has a slight taper to it in that direction, so the aluminum bushing is able to expand very slightly before snapping into place into the recess. In the other direction it was a very hard stop. Continuing to hammer it would likely have been successful in breaking the lip off eventually, but care would need to be taken not to damage anything else, i.e. fixturing the bike so as not to put too much stress on the frame or seatpost. As it is, I was able to saw the bushing off without hurting the spindle or the frame. The crank can take any road-compatible GXP bottom bracket as a replacement. Once apart, it seems apparent that the BB involved with this issue is a low-end OEM one that adapted existing parts and tooling from a Shimano clone 24mm road external BB and added the step-down bushing on the NDS to make it a GXP BB. The OD of the bushing is 24mm, ID 22mm.

I was able to get the bushing off with some gentle tapping from a screwdriver and a hammer. The bushing is a soft metal, my screwdriver definitely made a mess of the metal. If someone in the future has the same problem, use some sort of hard plastic to buffer the hits.

I did try to bash it out by reassembling everything and applying wood + hammer to the spindle end. This cracked the GXP plastic middle sleeve, so I do not recommend this method to anybody else in the future. It doesn't matter to me because I'm replacing the GXP BB wholesale.

The bushing was part of the inner race of the bearing - its purpose is to push against the GXP inner plastic sleeve. 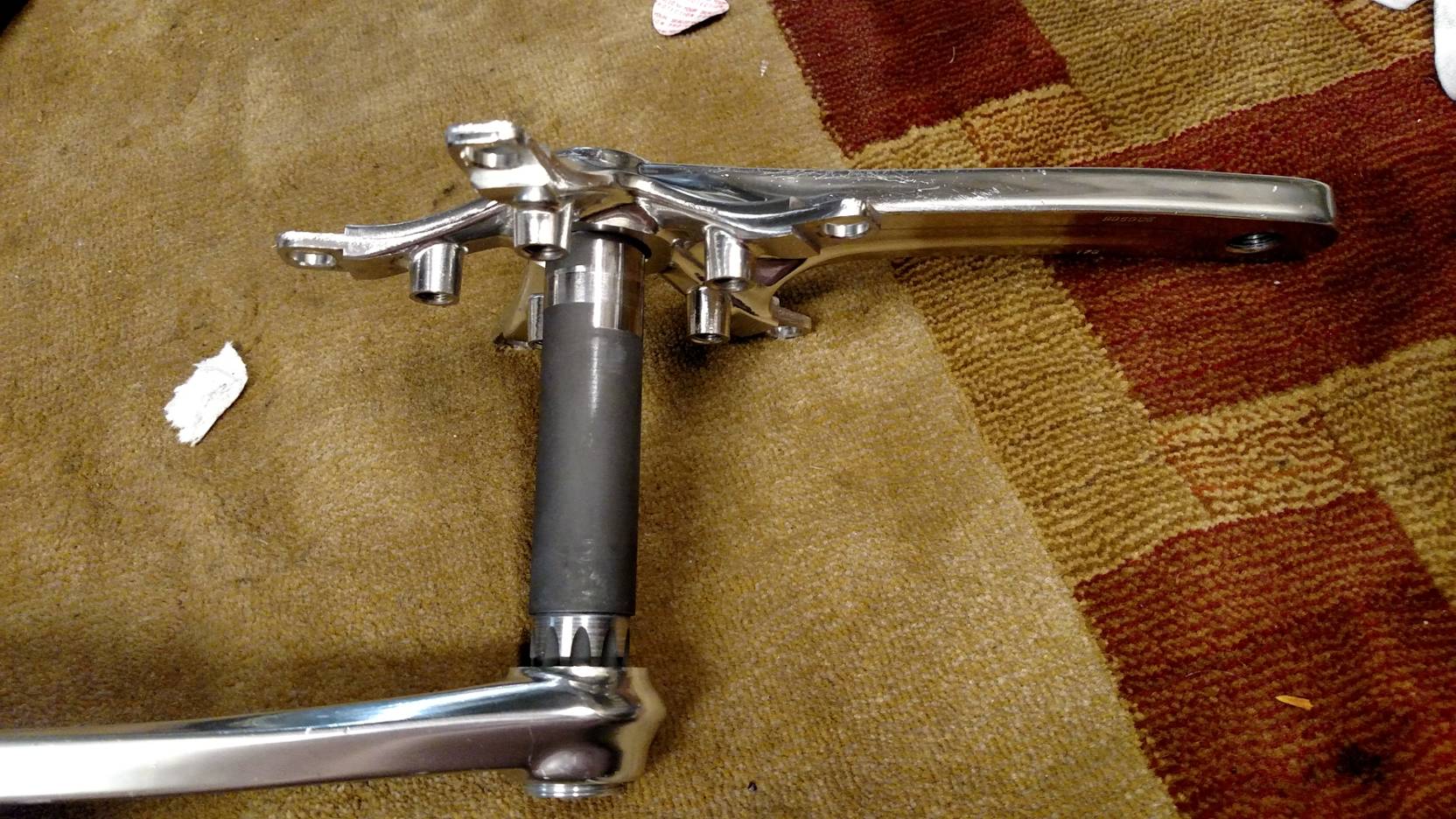 You can see the gap between the non-drive arm and the textured metal where that bushing used to be, which is where the bearing supports the spindle.

Here's a close-up of the splines, you can tell by the wear marks where the bushing sat and where the arm meshes: 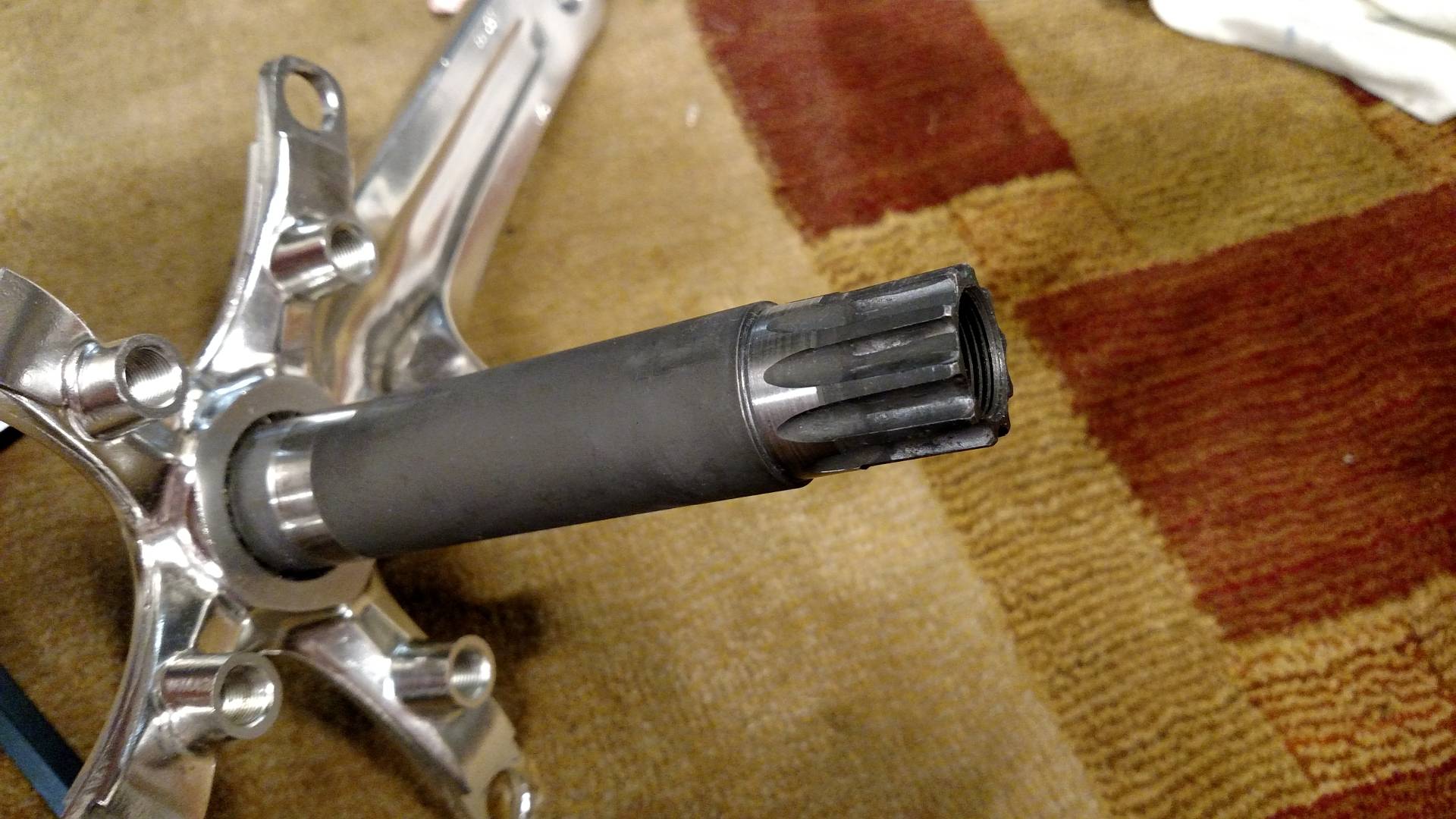 Here's a close-up of the bushing (with plenty of gouge marks from my screwdriver): 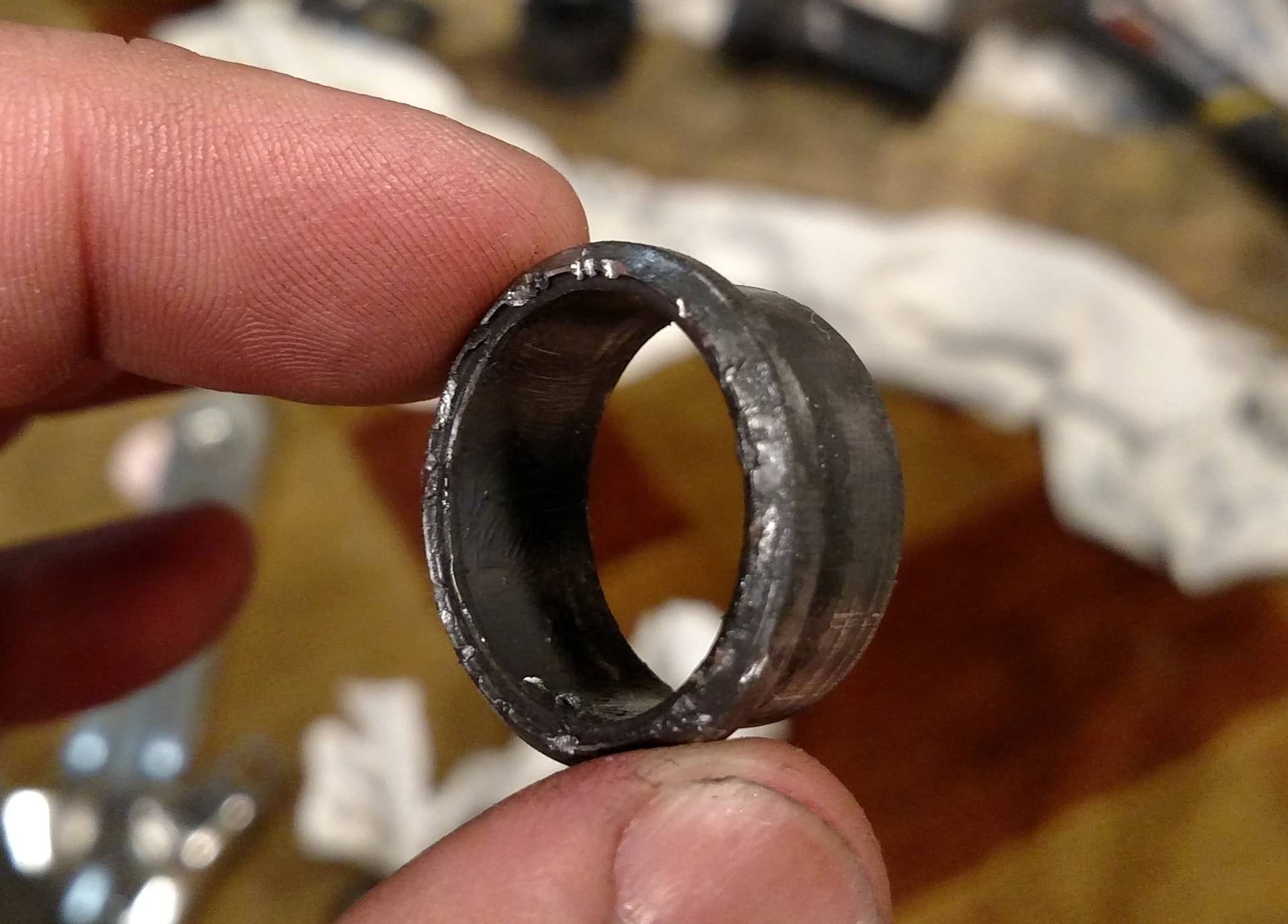 The bearings didn't fall apart with this removed because it's just there to push on the GXP middle plastic sleeve: 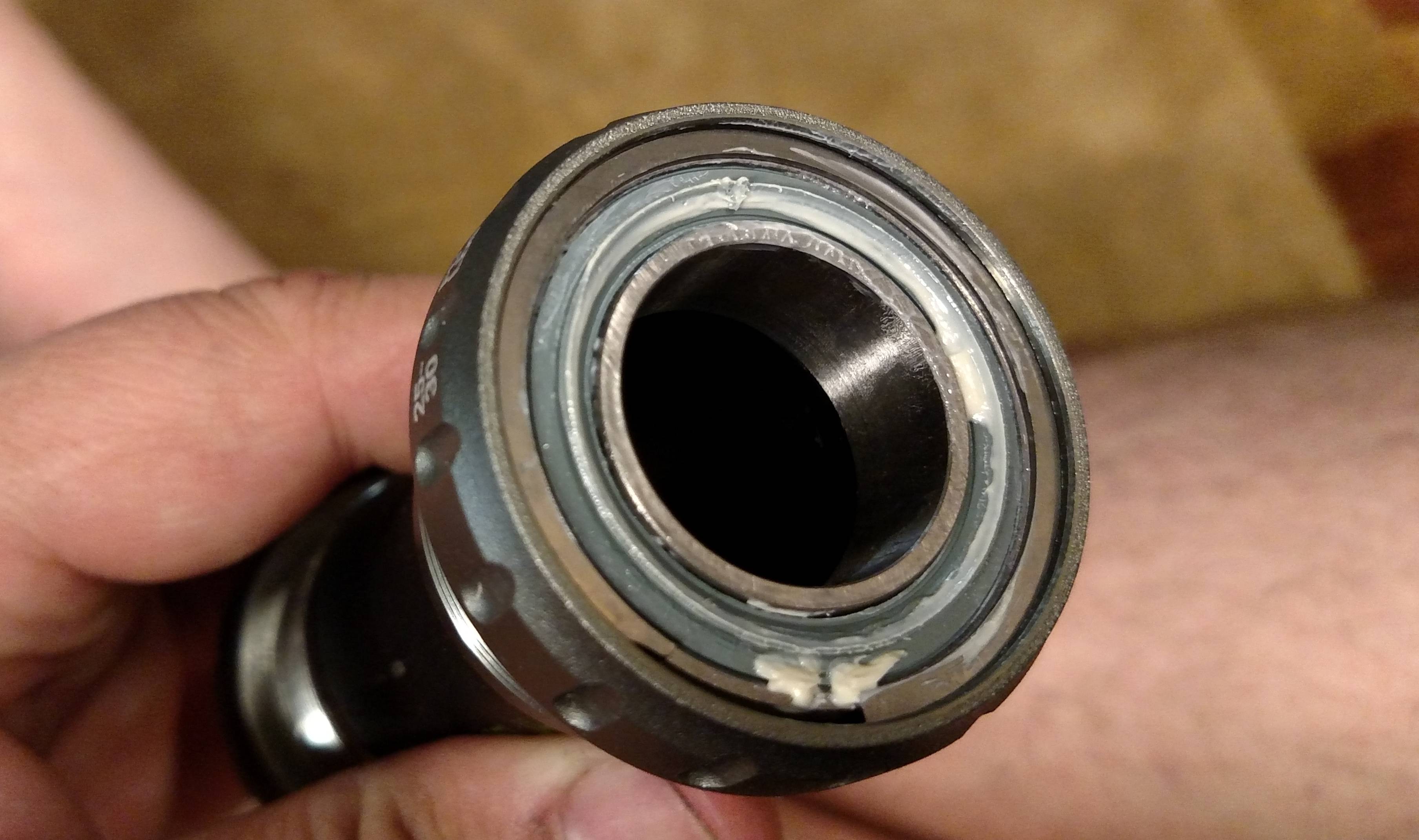 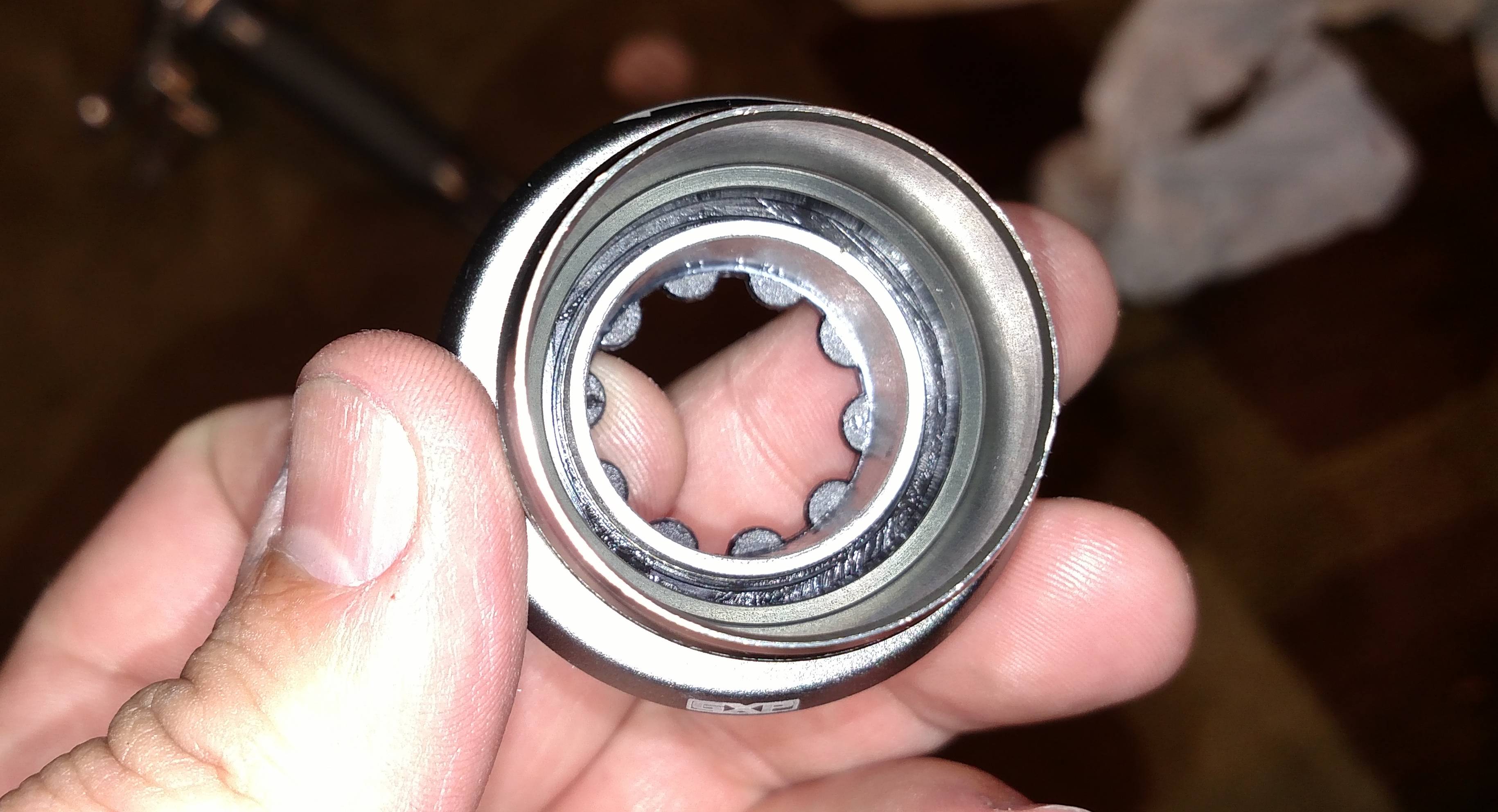 Big thanks to everybody for the ideas on what this piece was and how to take it apart. Thanks guys!

I would try reinstalling the drive side and non drive side cups to the frame (to keep the spindle centered). Then I would recommend a game of whack-a-mole on the spindle with a rubber mallet. I have often had to remove a crankset this way. A rubber mallet should be in pretty much any home mechanics tool kit. The rubber mallet has almost no chance of damaging the spindle. Provided you don't smash/dent your frame with it, it should be fine.

From what can tell from the photos it looks like the inner race is seized to the crank axle. When you removed the non drive side bearing did the ball bearings fall out? You can try to carefully cut the race off with a Dremel with a cut off wheel. You must be very careful not to go too deep and hit the crank axle. I would cut 9/10th of the way through. Then hit the slot with a chisel and see if it will split the race. If you aren't really comfortable doing this ask your LBS to do it for you. A mistake will be costly.

Not the answer you're looking for? Browse other questions tagged road-bike crankset bottom-bracket bontrager gxp or ask your own question.

6
Swapping cranks, but the new crank is wider, how do I compensate for this?
0
Crank fell off square taper BB. Should I replace bottom bracket
5
I can remove crank arms without a crank puller, is this a problem? I'm worried the crankarms might be loose
0
What is my bottom bracket spindle length?
4
How to pick a crank puller?
4
Am I using the crank extractor correctly?
3
Quarq Dfour Fit Problem
1
Can I grease a crank spindle/bracket without disassembling the crank set?
1
Tightening bottom bracket prevents crank spindle from turning
2
square taper bonded to crank arms