The Tour de Trump (later Tour DuPont) was run from 1989 to 1996 on the East Coast. Information regarding the details of these events seems to be sparse, especially the earlier editions.

Are you still looking for stage maps? I have the Tour DuPont program books from 1993, 1995 & 1996. They include a map and a profile of each stage. Also have Lance Armstrong's signature in the 1995 book. 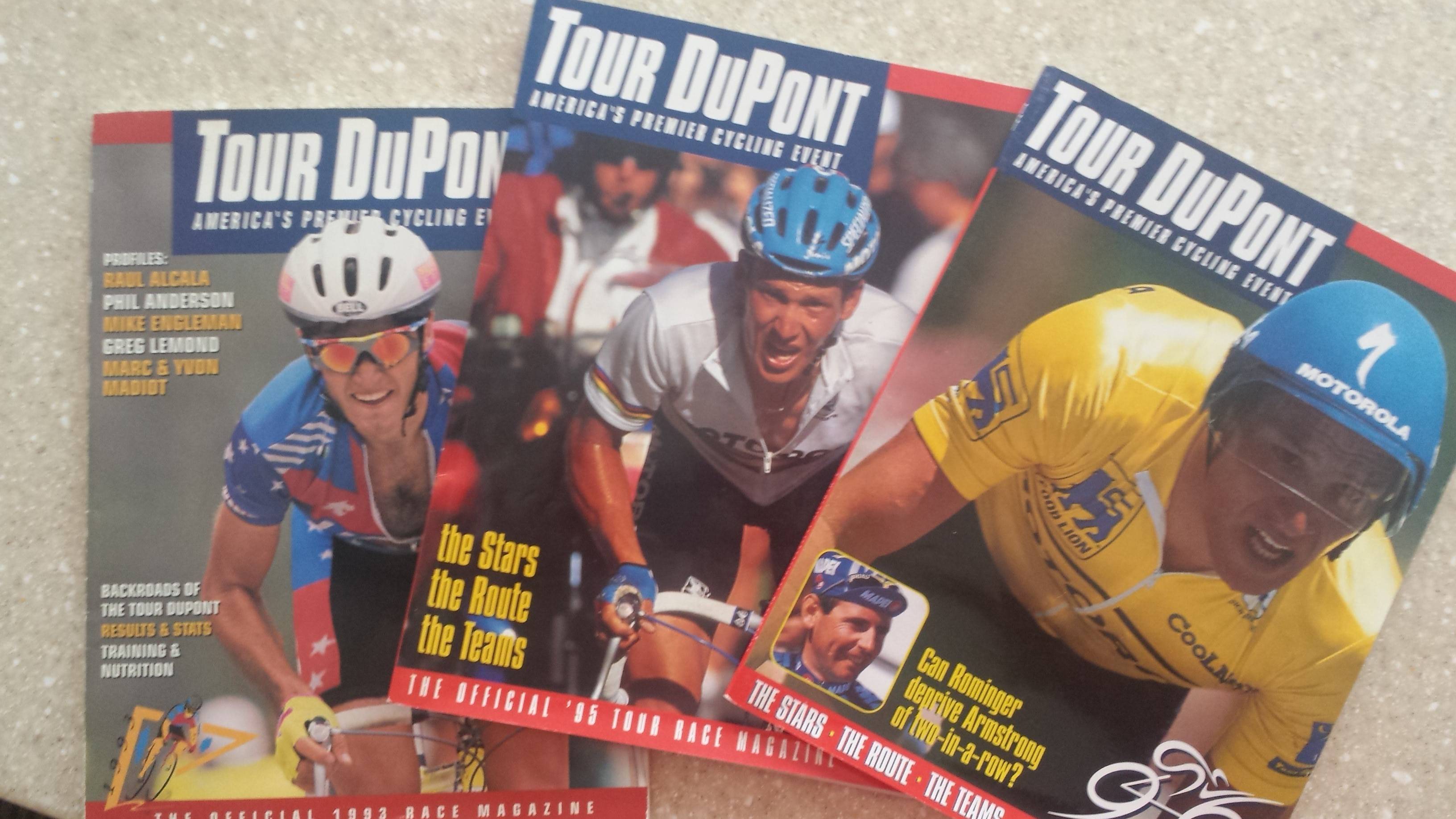 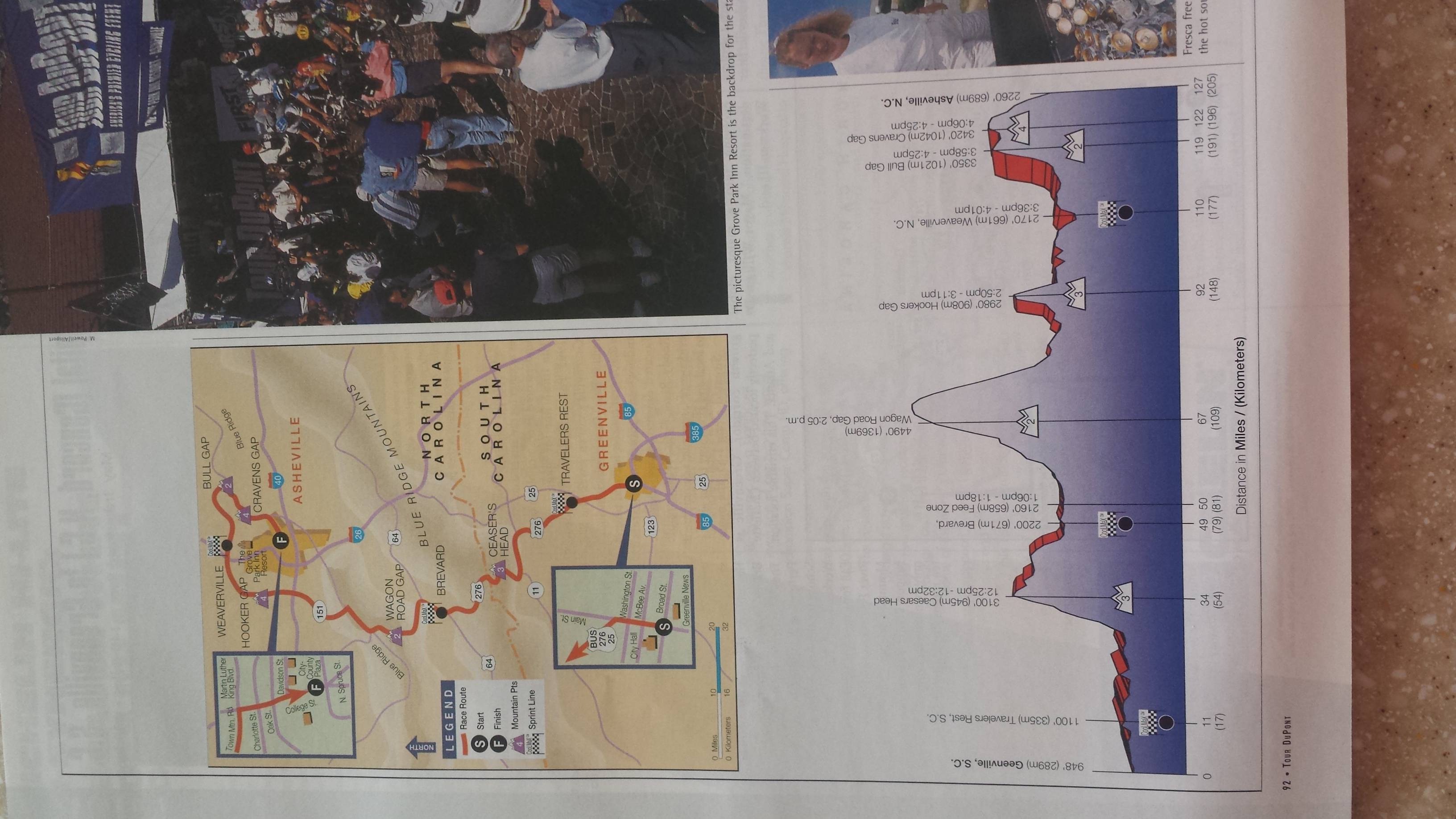 edit - Here's a first snap of the overall maps for the three years.

Apologies for the quality - I've just snapped them with a phone in the meantime, and the glossy paper makes it hard to avoid reflections. Better images will be coming, will scan the lot with a flatbed scanner. 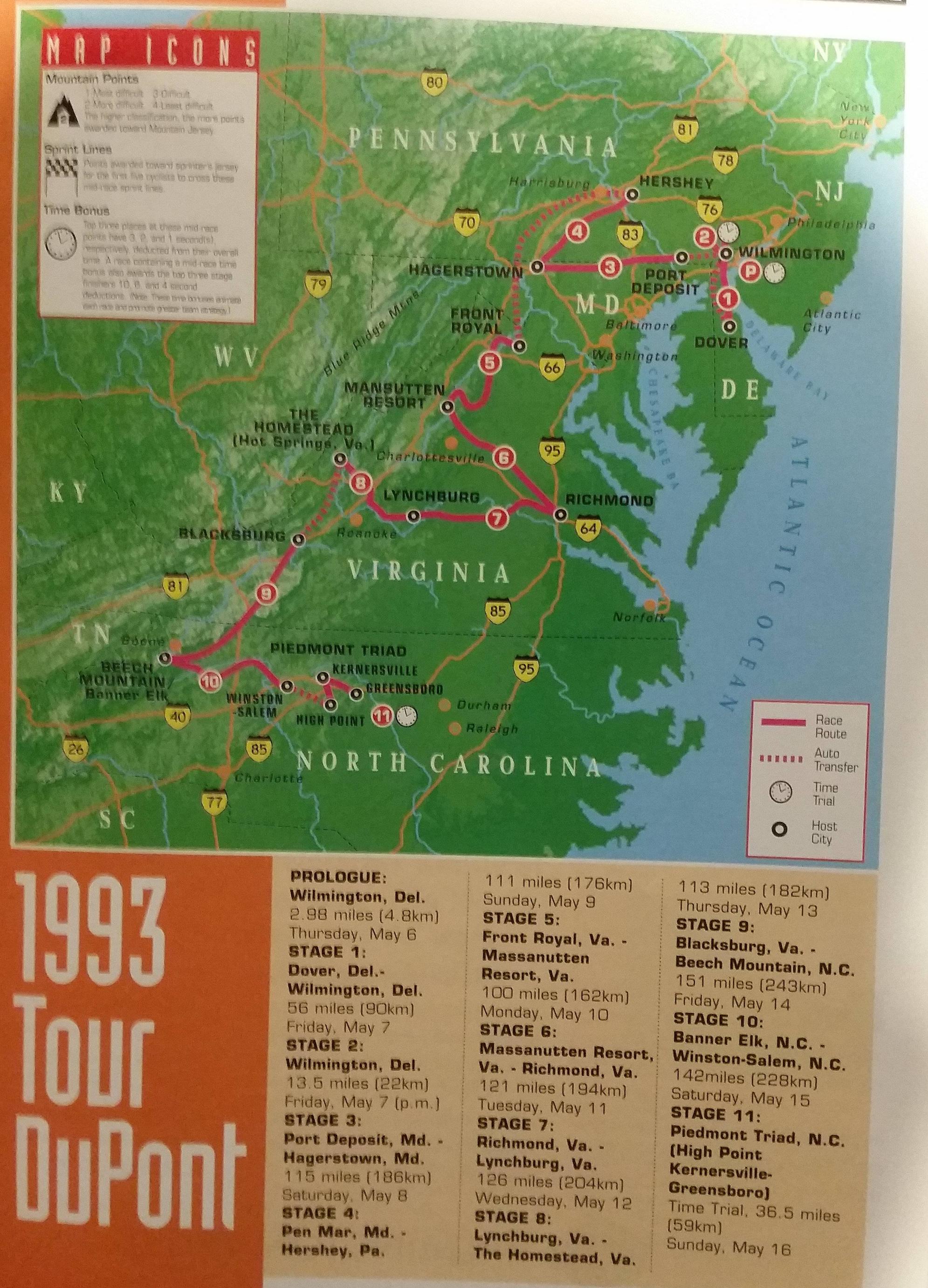 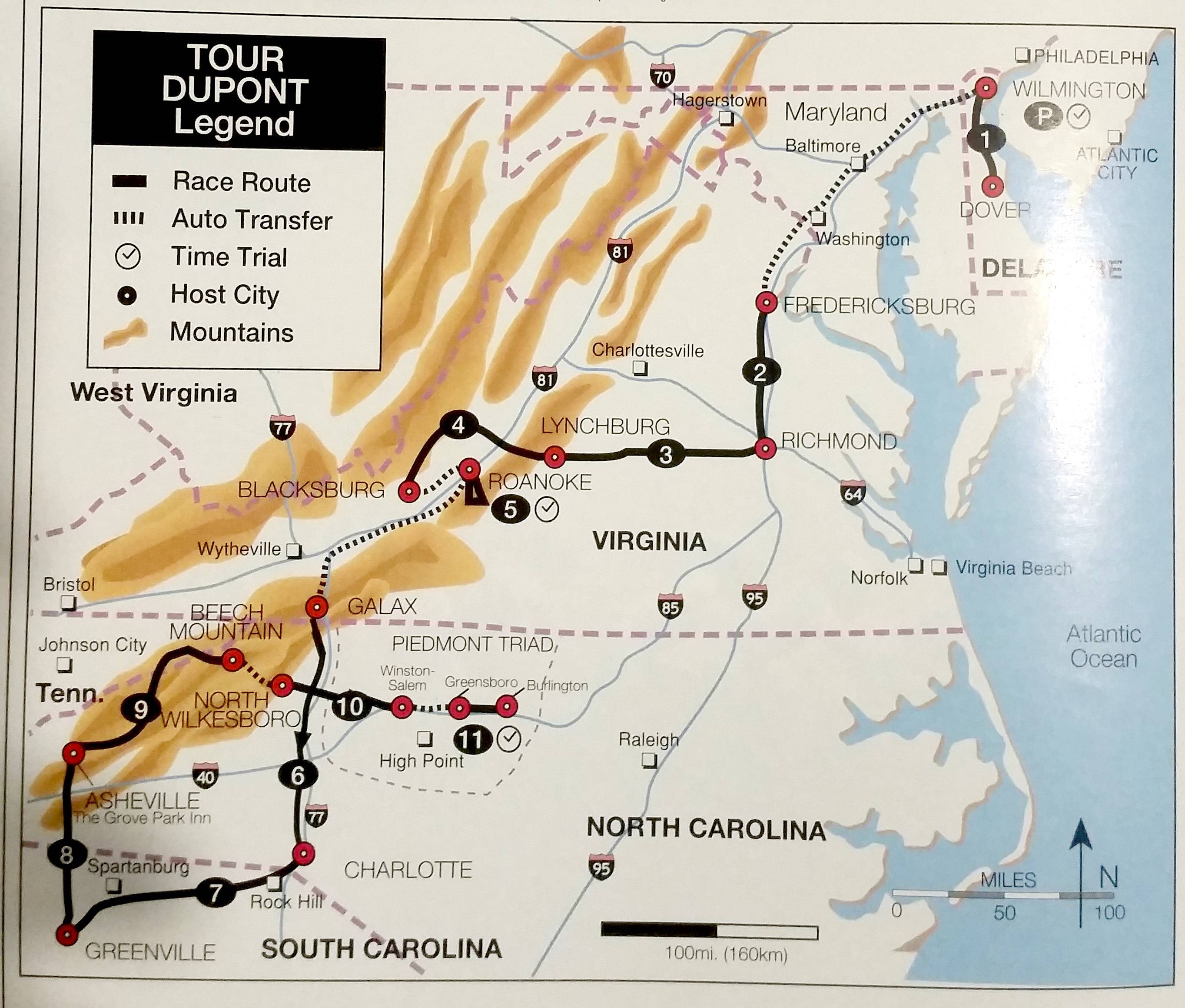 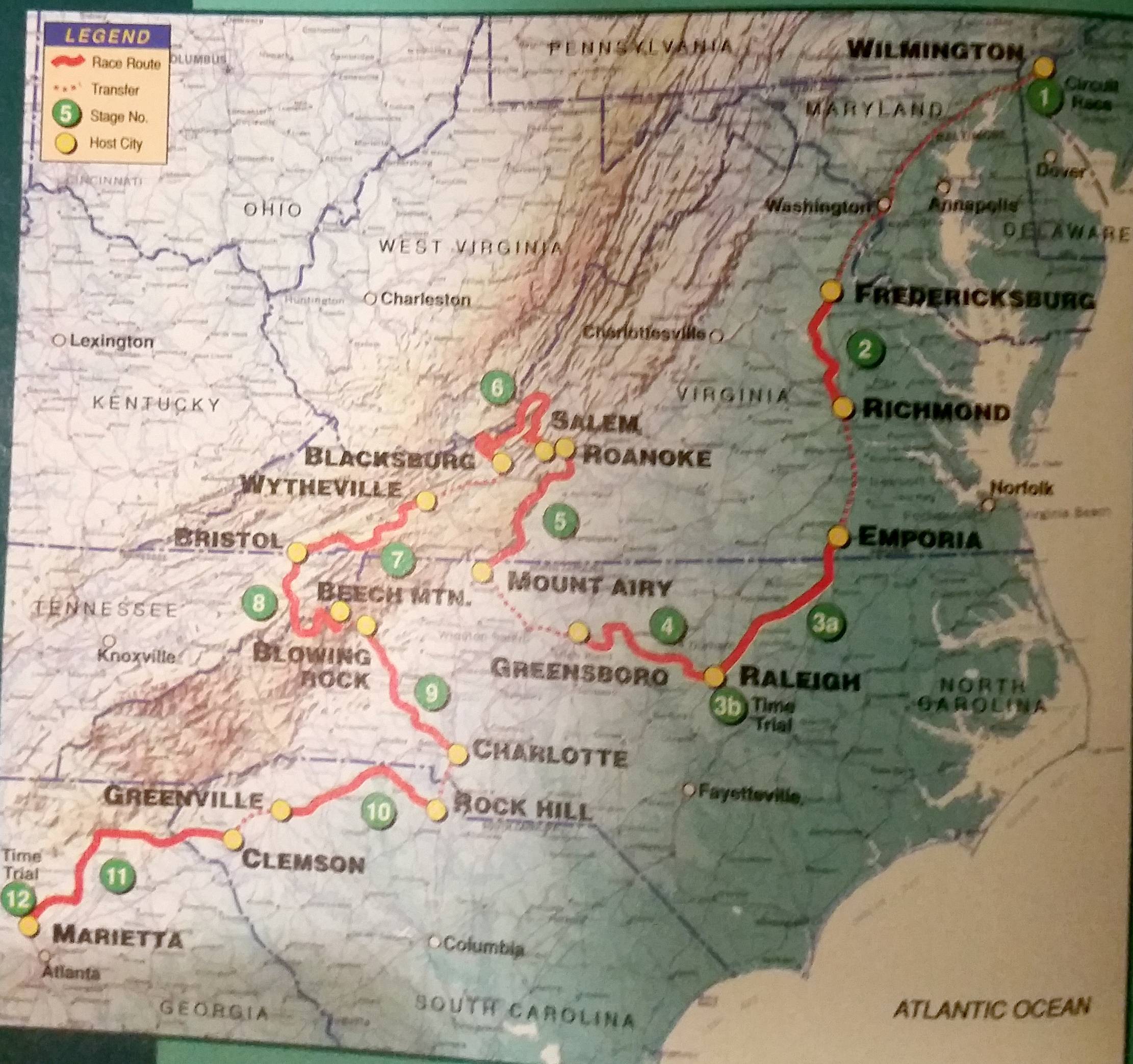 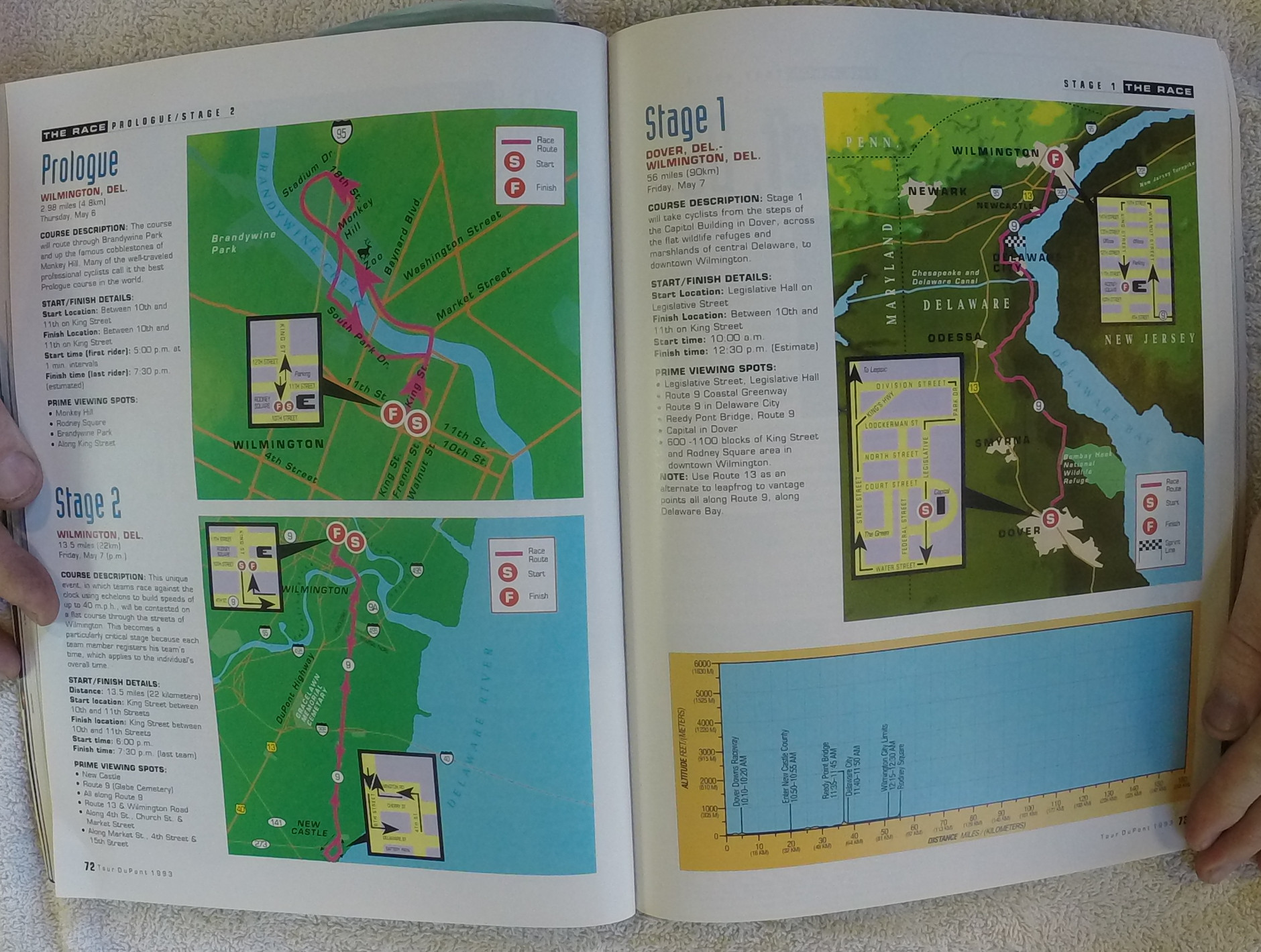 This is not a proper answer. Its more a collection of notes gleaned from different sources. Feel free to add more if you find other things.

Stage 1 - May 6th. First stage was in Albany NY to New Paltz (110 miles), on May 5. This segment is remembered for a hellishly difficult climb called Devil's Kitchen. Officially named Platte Cove Road but dubbed Devil's Kitchen for a nearby mountain hollow, the climb was a 15-degree grade in West Saugerties that ascended from 300 feet to 1,840 feet above sea level in a span of two miles. This part of the route is https://ridewithgps.com/routes/2746243

Stage 2 - May 7th between New York and Allentown on Sunday, May 7. 123-mile route ran due west from NY through New Jersey, over rolling hills and into a head wind, before ending in Allentown, Pa.

Stage 4 May 10th. BETWEEN FRONT ROYAL AND CHARLOTTESVILLE, VIRGINIA 107-miles

Stage 10 - May 14th The 1989 Tour de Trump ended with an ITT in Atlantic City on a Sunday, just before the Trump Plaza Hotel & Casino. 38.6km The 24-mile time-trial course started in front of the Trump Plaza Hotel and Casino, continued a mile down the boardwalk, took a hard left through a slum area, passed in front of the Trump Castle and took a right over the Brigantine Bridge. From that point the course became a maze of turns through Brigantine Island. From http://forum.cyclingnews.com/viewtopic.php?f=21&t=30224

Three "non-Trumpian" towns through which the race passed: New Paltz (N.Y.) and Front Royal (Va.) and Allentown (Pa.) Also, the first six stages of the Tour passed through the Catskills, the Poconos, Pennsylvania Dutch country and the Blue Ridge Mountains and had the feeling of a European road race—rolling hills, open countryside, winding roads. From http://www.si.com/vault/1989/05/22/119927/the-wheels-of-fortune-the-tour-de-trump-billionaire-donald-trumps-bike-race-through-the-american-countryside-was-a-smashing-success

Here's the only "map" I could find, in two pieces. 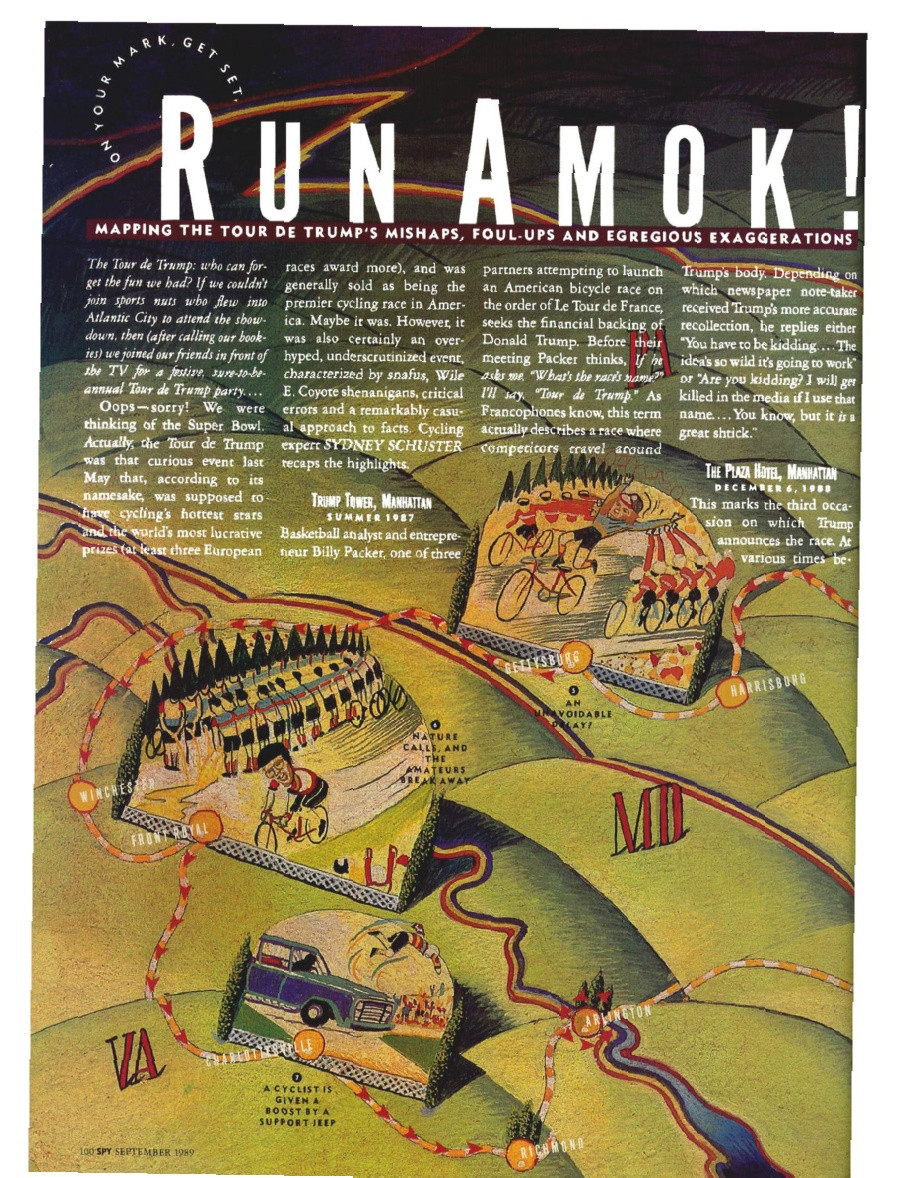 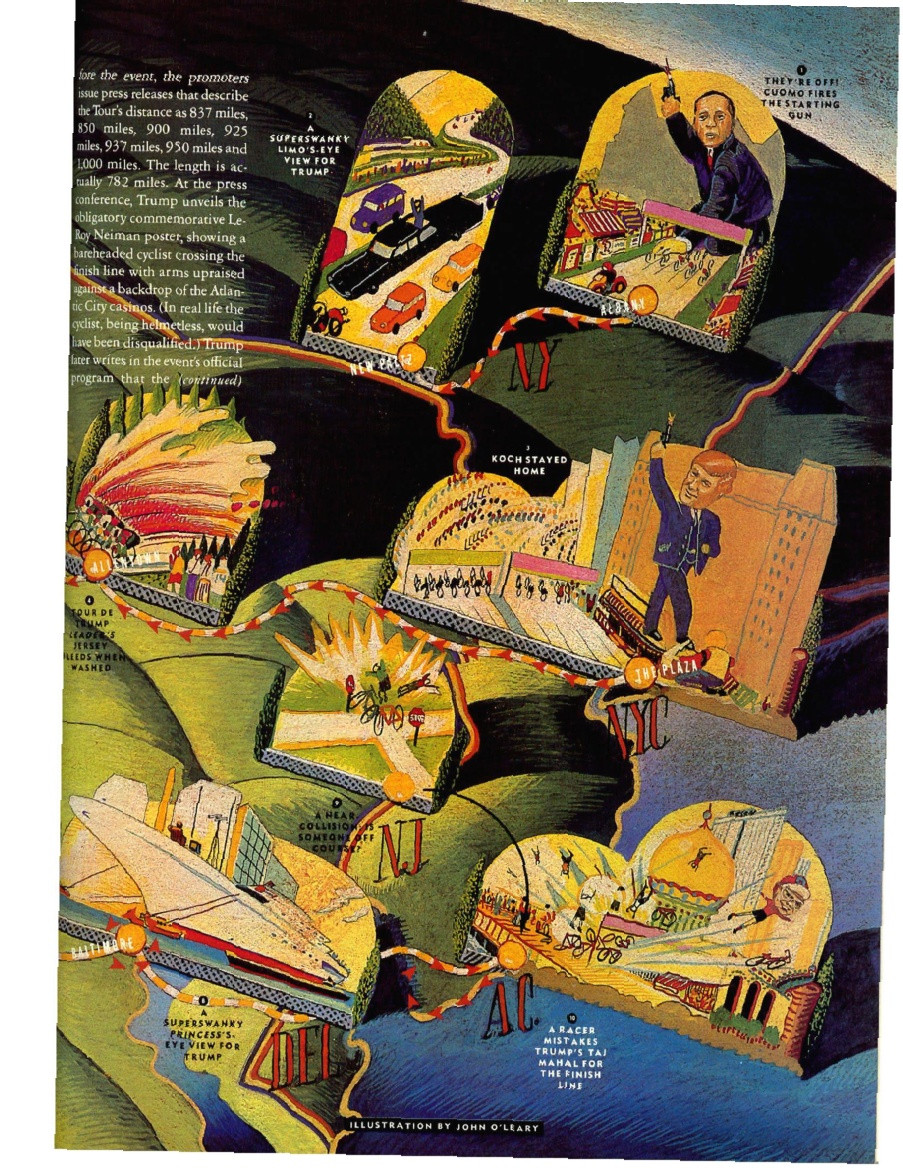 From "Spy Magazine" and by "SYDNEY SCHUSTER" original link at https://sydneyschuster.wordpress.com/2016/03/03/run-amok-mapping-the-tour-de-trumps-mishaps-foul-ups-and-egregious-exaggerations/

One other reference to a map for this year:

Suggested plan in 1989 was "Begin the Tour in Boston, steer it down the coast, to Washington...Philadelphia...Detroit...Chicago—go west, young man!—to San Francisco, before concluding the show in L.A. " but this was written in 1989. Probably a grand plan that was changed a lot.

The plan had changed by February

Trump joined Delaware officials in Wilmington to discuss details of the race, in its second year. This year's event will begin in Wilmington May 4 and conclude more than 1,000 miles later in Boston on May 13.

Race was organised/directed by a group/company called "Medalist Sports Inc." of Richmond, Va, according to http://articles.baltimoresun.com/1990-11-16/sports/1990320048_1_tour-du-pont-tour-de-trump-medalist-sports

Eileen Webber, a spokeswoman for Du Pont, said: "We just made the announcement of our sponsorship of the race and, as yet, we haven't had a chance to negotiate with any cities. I'm sure most the cities involved the last two years will be high on the list for the race next May." Same source.

So the first Du Pont one was probably pretty similar to the earlier two courses.

I know this thread is super old but the 1990 version ran through my home town of Saugerties NY, ran through West Saugerties and up Devils Kitchen into Cairo. Platte Clove/ Devils Kitchen is a very steep incline and my dad was telling me that many of the bicyclist had to get off their bikes cause they couldnt make it up it (this road is closed during the winter because its cut into the mountains)

Late to the party, but I worked on the 1990 Tour de Trump. I remember a number of the finish line locations.

I also worked on the West Virginia Mountain Classic, which like Tour DuPont, tried to fill the void after Trump dropped their sponsorship. So I may mix up the locations between the races.

WVMC was produced by the same group as the CoreStates US Pro Championship. Dave Chauner, former Olympic cyclist who raced in Europe was involved in producing the races.

Tour DuPont was produced by a different group (perhaps the same group as Tour de Trump) and I didn't work on that event. I think Tour de Trump, West Virginia Mountain Classic, and the Core States USPro Championships were all sanctioned by USA Cycling, not United States Cycling Foundation (USCF). If I remember it was a professional vs. amateur issue.

Someone posted a video of the 1990 Tour de Trump. I haven't watched it, it's 83 minutes. <https.www.youtube.com/watch?v=-4ufHfCZGN4>

This article has a photo of the 1989 race program cover with all the stages listed. <www.cyclingnews.com/features/when-president-trump-inaugurated-the-1989-tour-de-trump/>

Some photos and background, more about the business of putting together a race. Mentions some locations like the 1989 race finishing on the Atlantic City Boardwalk in front of the Trump casino. <www.businessinsider.com/tour-de-trump-bike-race-atlantic-city-history-photos>

I have a shirt still from when I lived in Harrisonburg VA and a stage ended there. Can't remember the year. I remember being excited about seeing someone but it might have been Greg not Lance. I don't know what happened to pics I took at finish line. 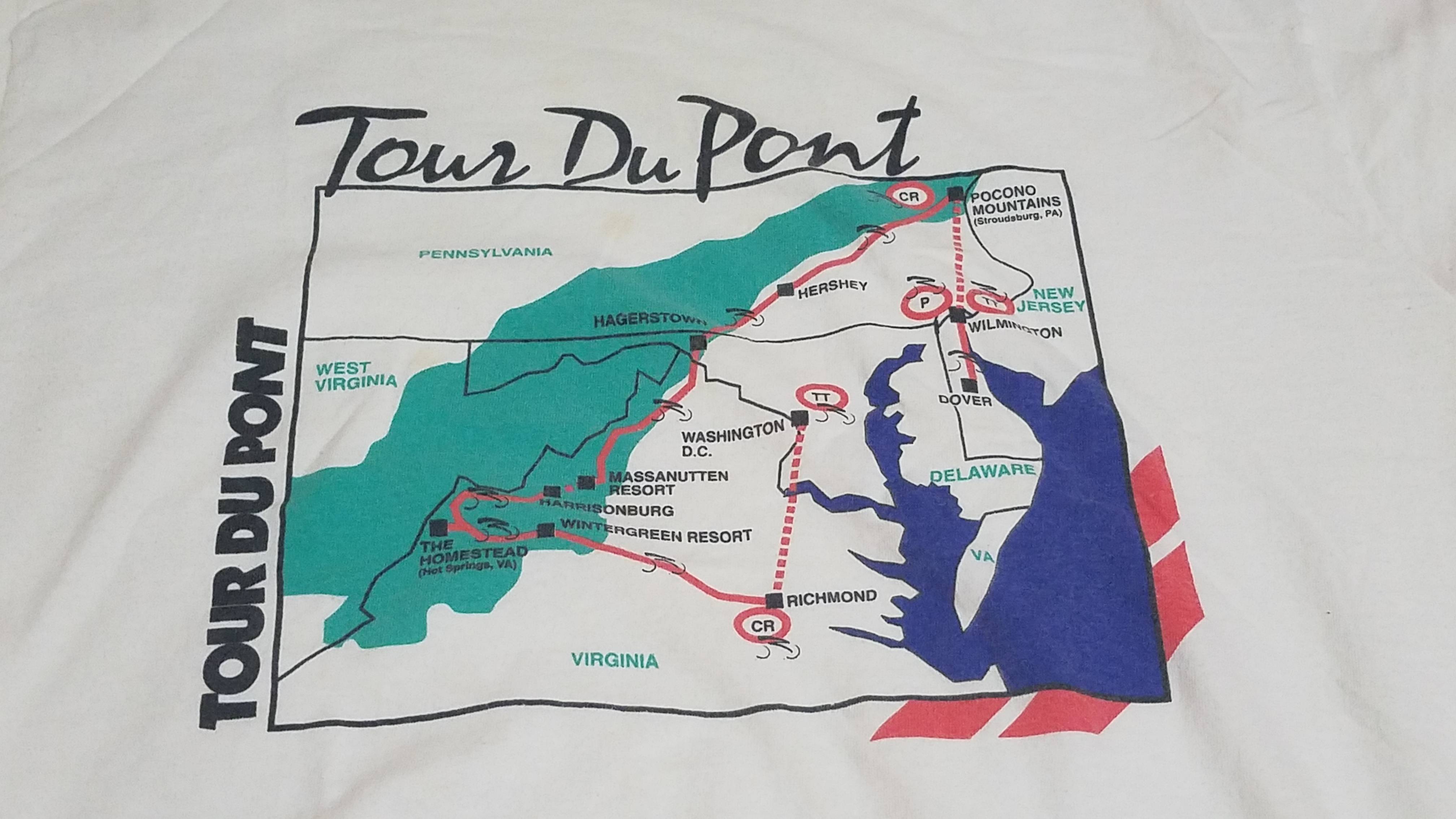 The 1990 edition had a stage in/around Bethlehem, PA. I don't know exact date or route but do know it did at least two loops, probably three, around the city. Route climbed The Hill at Lehigh University. I believe it finished on New Street.

Not the answer you're looking for? Browse other questions tagged racing history road or ask your own question.