Should I seal the open spoke holes on my front rim?

I have a 16 spoke front wheel on my road bike. The hub is an oddball Shimano one with 16 big nipples at the hub end instead of the rim end.

This wheel also has a 32 hole aluminium/aluminum rim:

I washed the bike in the weekend and dried it in the sun, then hung it up. On the first ride I pushed it for half-a-wheel revolution, and water came out of the rimholes that were at the bottom and are now at the top. Total quantity was perhaps a couple of tablespoons worth?

Should I seal up the 16 open holes with something? Theres no way they'll ever be used for spokes.

I don't know if this was the original rim or hub, given its a 1998 bike there's a good change its been replaced.

EDIT 2 years later I have retired this wheel. It broke a single spoke on a downhill road at about 50 km/h (35 mph) and the sudden lack of true made it rub the brake/fork while shaking madly.

The spoke broke toward the hub end, so I still had the oversized nipple stuck in the hub and the rest of the spoke was hanging from the rim. My suspicion is the spoke was weak from someone (maybe me) holding it badly while truing which weakened the metal with a score/scratch.

If one more spoke broke it could have locked up with a nasty full speed prang. A normal 32 spoke wheel could survive the loss of multiple spokes before becoming unrideable.

I did replace the dead spoke, but all of them have a phenomenal level of tension on them, which is also a concern. For now, its hanging on a hook as a spare wheel.

Well, the reason you might seal them is to reduce the risk of puncture, not rust. But rust is out of the question in any case if you're dealing with alu.

What do you propose to seal them with?

As far as I can tell there are two potential risks. First, you seal them with some substance which could actually wear the tube (this would be difficult because there should be rim tape in there). Second, you seal the holes now. and need to remove the seals later. Potentially this could be a pita.

As long as you factor these things in, I don't really see any harm in doing this. But not really any gain, either.

It would be best if you could get 16 hole rim (yeah I know the may be hard to find). Holes on the rim go in the zig-zag pattern, and since you skip every second, all your spokes are on one (zig) side of the wheel. This is less than ideal, and in my humble opinion bigger concern than rain coming in empty holes.

Cover each hole with a small piece of tape/sticker.

It will help to keep water out certainly (if you are an all seasoned rider). But more importantly it will help you keep out small bits of gravel that could otherwise end up rattling around inside your wheel. My vote is for tape simply bc it would not risk drying out and falling into the wheel the way a hard bit of glue could. If you use clear or silver it should be less noticeable than caulking.

I decided to follow the suggestion from an mtbr thread, and ordered some of these 5mm furniture plugs. My spoke holes measure ~4.5mm, so I suspect this will fit with a little encouragement (which hopefully will keep them from popping out). This was partly motivated by aesthetics; I'm sure tape would work too, but this has potential to look much nicer -- especially if your rim is relatively flat (non-aero) at the spoke holes. 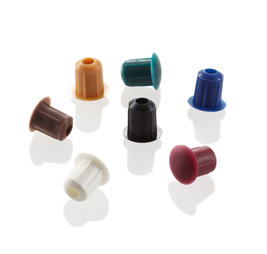 Not the answer you're looking for? Browse other questions tagged rims weather rain or ask your own question.

12
Spokes loose on a new wheel, is this expected or a bad build?
5
Lots of broken spokes on one bike, with different wheels
4
Rim dish and flange angle problem
7
Rim cracks on spoke adjustment holes, how much should I panic?
0
Rim shot? Goes badly out of true at medium tension
3
Straigtening a rim with 7mm deviation in a single section
4
My rim exploded inflating on an automatic pump of a gas station. Should I reuse wheel's spokes/hub or buy everything new?
20
I have a 2nd broken spoke after 300km on a new bike, is it the wheel or me?
10
Questions about cracks in my rim