Frame with bottle cage boss ripped out - how serious is the damage?

I'm a huge fan of Greg Lemond so naturally when this frame showed up in my local Facebook page with just the frame and headset, no fork. I got very excited. The seller says that the bottle cage boss was ripped out, and that it wouldn't be a big problem for the frame's structural integrity. This is the only issue with the frame. 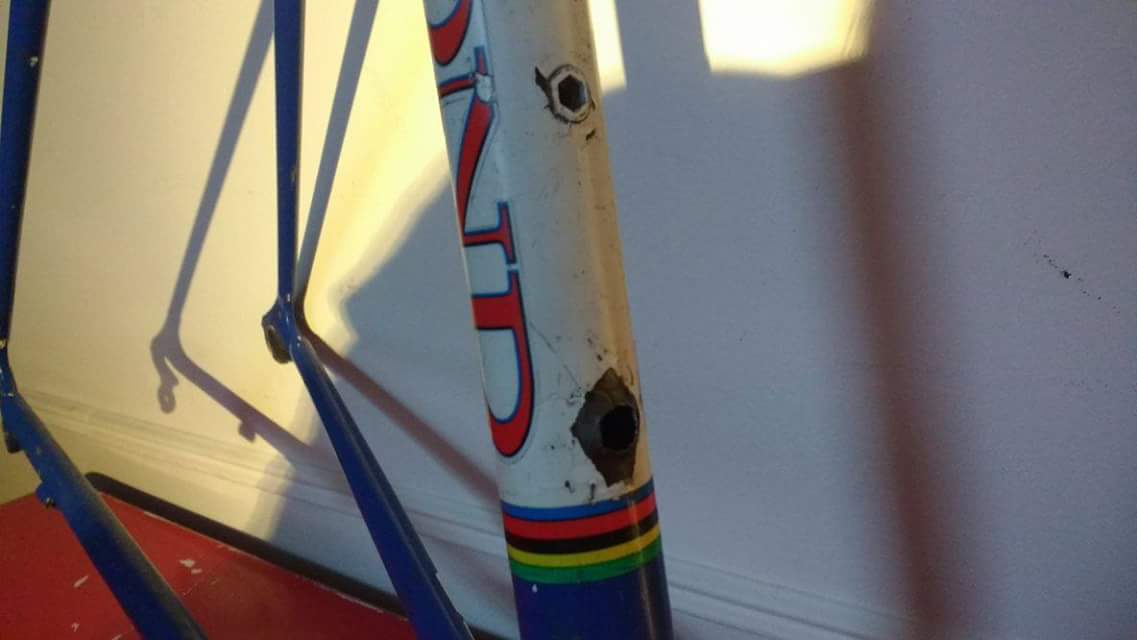 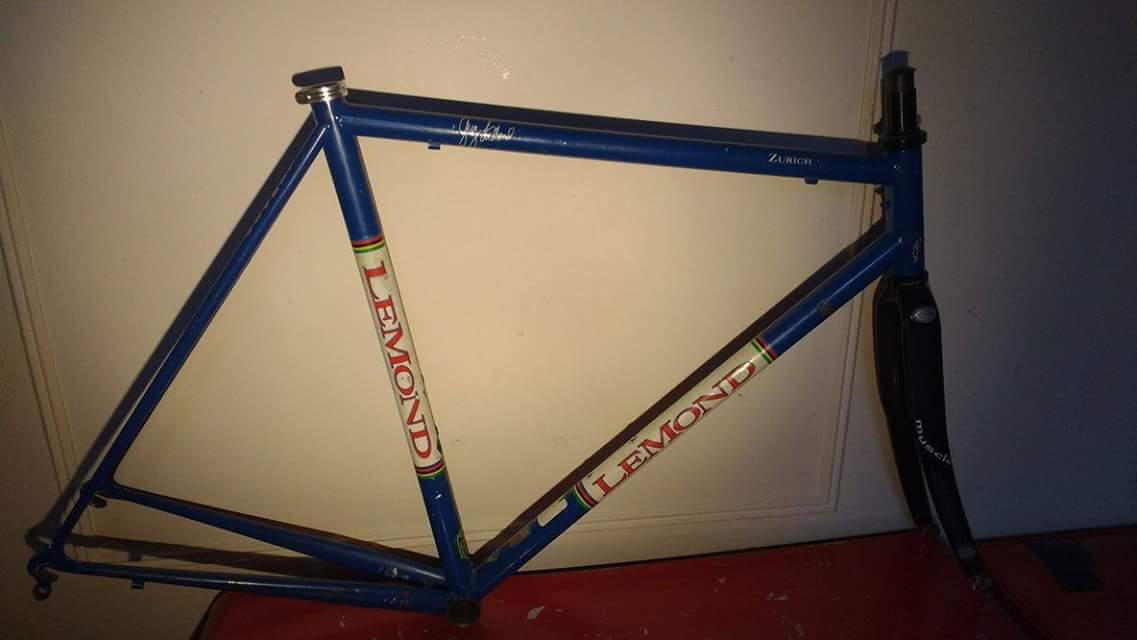 You'll need to very carefully inspect the area around the boss that's been ripped out, as well as your usual second hand frame check. If the bike was ridden after the damage cracks could easily have spread and you might be well on the way to a two piece seat tube. This groove could be the start of a problem, but it's probably just a scar from where the cage was ripped out: 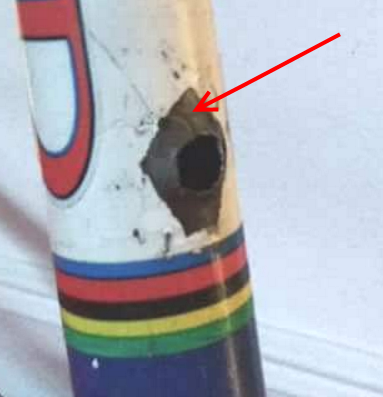 I suggest that before you think about buying it, ring a local framebuilder and ask whether they will fix it for you. Then ask what they will charge you. Then work out what parts you're going to need and roughly what they'll cost. Adding all that up will help you answer "is this bike worth that much to me?"

My expectation is that brazing a diamond of old tubing over that hole would fix the problem, assuming there's no real cracking. You'd want to wire brush the paint off most of the seat tube, or possibly start by having the whole frame sandblasted clean. That will save the framebuilder charging you for the work, and once it's clean you can more easily check for other damage. After it's brazed you will be repainting it anyway, so this step just tweaks the order a little to make life easier. Note that after blasting it will rust very, very easily, and also soak up oil, so try to not touch it with your greasy paws any more than you need to.

Once it's clean I'd take it straight to the framebuilder. Your inspection will mean nothing to them, they will want to check everything themselves. Not least because once they work on it, it's their problem - any failures of the frame are likely to end up on their doorstep. So be prepared for them to say "nope, not touching it, despite what I said on the phone". Ideally with a reason, but how much have you paid them so far? They may want to sleeve the tube for this reason.

If it was my bike I'd just hit the area with a wire brush in the grinder to clean off 5cm each side of the hole all the way round the tube, check for damage, flex the frame to see if that opens up any cracks, then braze a chunk of old tube over it. Then I'd post it off to my local blast'n'paint shop, with the BB and other threaded holes plugged (I have a set of old BB cups that have been blasted and painted/powdercoated about 10 times so far). That would take me maybe an hour if I was charging for it, excluding the blasting and painting. But for a difficult customer I'd charge 2-3 hours because if you waste my time you're going to pay for my time.

The basic issue is that it's an old frame that's not worth a huge amount, and after the repair it'll be worth even less. As in, you probably won't be able to sell the bike, full stop. So the question is: do you want the bike after the repair?

Why do you want the bike?

If you just want to have it in your collection, go for it.

If you want to ride that bike fast and long, look for metallographic laboratories in your region. No one knows why the boss was ripped off. There are several methods of non-destructive fractography and they are able to assess the structural integrity far better than you or the bike service can do.

4
How worrying is damage to a carbon fiber frame near the bottom bracket?
12
Attach bottle cage to frame w/o mount screws
2
damage to carbon road frame at the seat stay and drop out junction
1
May I ignore the frame damage (or should I get a budget carbon frame)
1
Plastic screw with ripped-off head stuck in the frame
1
What to do with scratched top tube on carbon fiber frame with no structural damage?
7
Bike with a hi-ten steel frame for getting around the city?
5
How serious is the dent on alu frame?
12
Big dent on frame: How did this damage happen?
1
How to remove a stripped bottle cage mount?