Find or fabricate a metal bracket for bicycle trailer

My family and I just recently jumped into cycling. We bought two bikes for my wife and myself and a pull behind trailer for our 1.5 year old little girl. Problem is, my bike has a very small point where the hitch adapter can be mounted.

The stock adapter is shown here, the smaller part attaches to the rear axle: 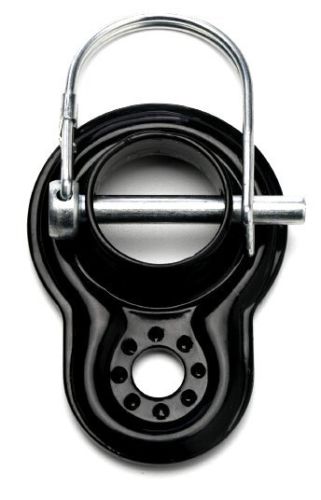 Where it should, but can't, be mounted on my bike (don't mind the tape measure starting at 2, that's a habit from contracting work, basing off the first visible inch as an offset): 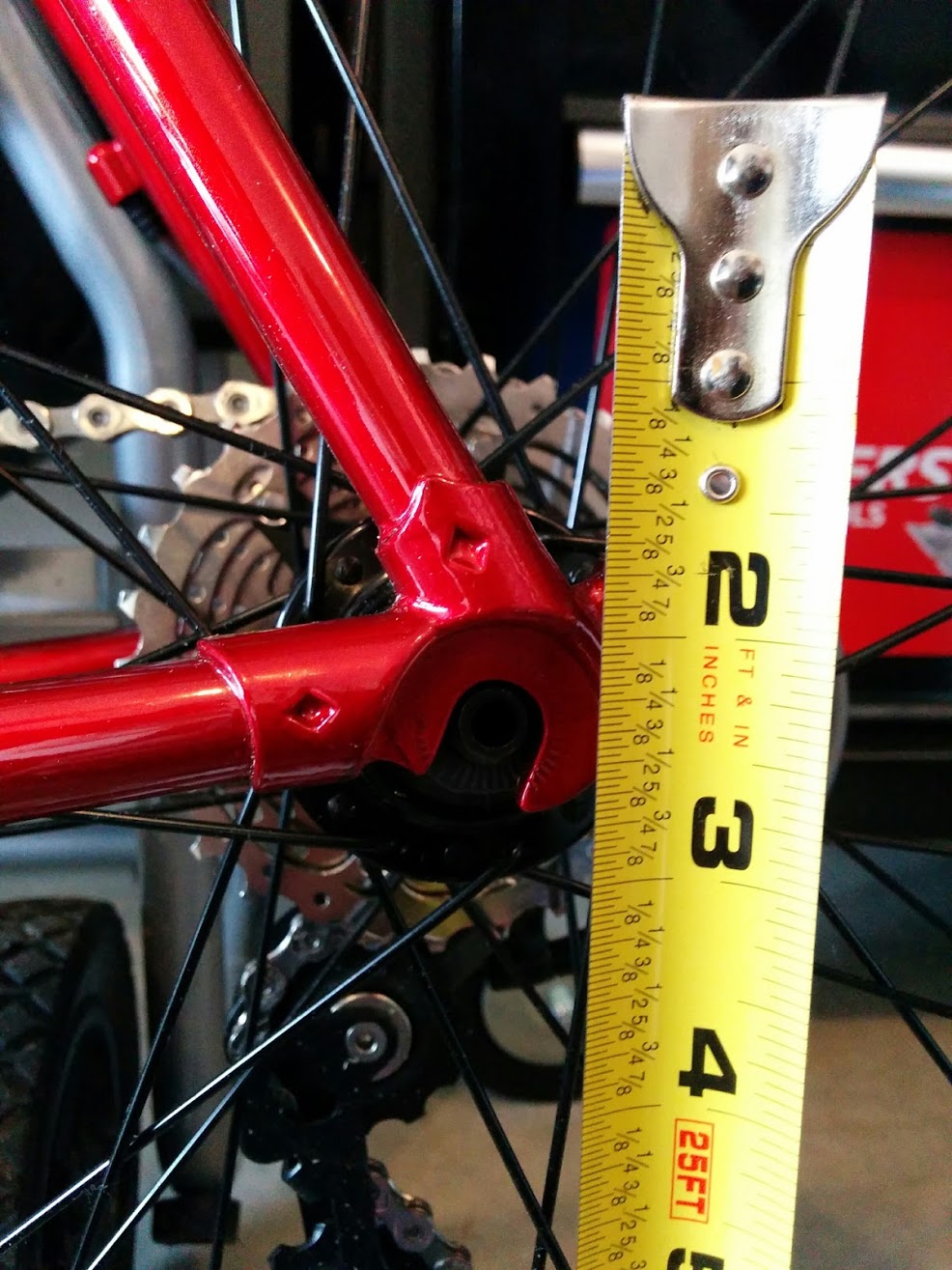 I went to Home Depot hoping for a bracket that would allow me to offset the stock adapter, and found a gate hinge that actually worked, but the metal was too soft and bent. I drew up a representation of what I think I need to make this work, but I don't know what to call it in order to see if a part like this even exists anywhere. 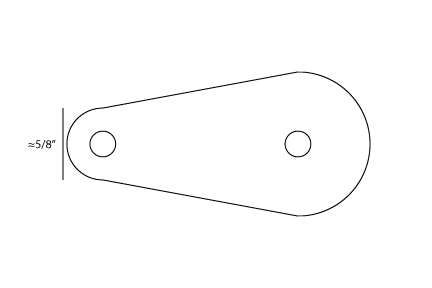 If I need to fabricate one, any tips? I don't have any metal working tools besides a drill.

UPDATE: The simplest solution was what worked. Performance Bike didn't have skewers that were any longer than my rear (120mm I think), and I even tried to rig something up on the rear eyelet (M5 0.8mm) but just couldn't get it to fit. Even if I had, I wouldn't have been very confident in it. This morning I was hooking the adapter up to my wife's hybrid, I pulled her QR skewer off and it looked longer than my 120mm - and it was. In fact, it fit perfectly on mine with the washers, and mine fit just fine on hers. I took it for 12 miles and it worked very well. I agree with @Móż that a solid spacer would be better than the washers, something I'll order soon. If I can find clamps like @Criggie suggested I think that will make the best long-term solution, but they were pretty difficult to track down. 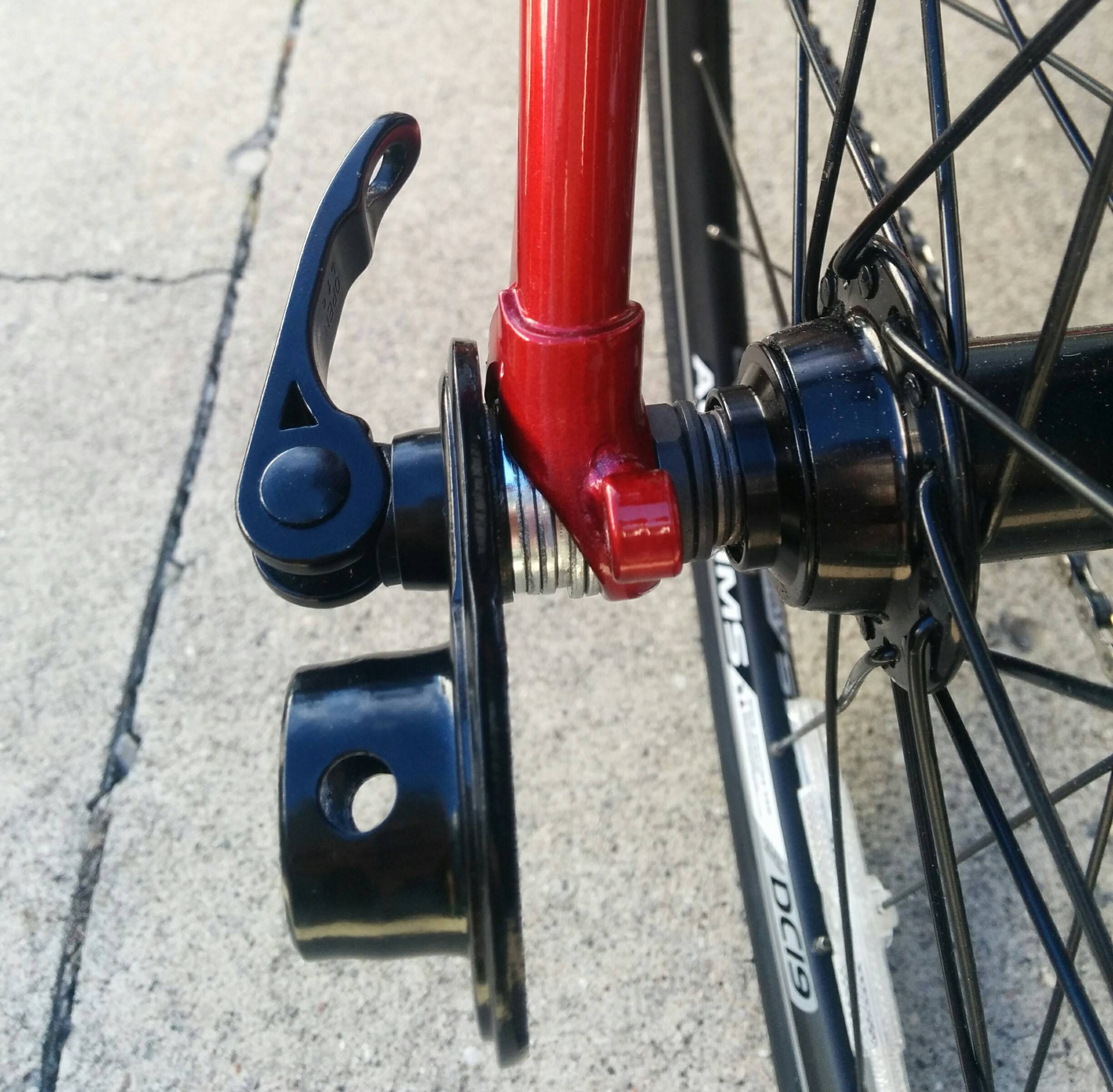 I'm curious about why you bought a trailer without checking that it would attach to your bike. It would be better to return it, taking your bike(s) into the shop, and get them to find something that works. You're already suffering from the sunk cost fallacy (you bought something that doesn't work and your proposed solution is to spend more time and effort on it). Will a half-arse bodge job really be better than just buying the right tool for the job? You want a bike and trailer to tow your baby daughter. Try to work towards that, rather than getting caught up in "I have a banana, a bicycle and a trailer"... this isn't a logic puzzle.

If you can find a longer QR skewer you could put a spacer between the frame and trailer hitch. Longer skewers are made, the people who make BoB Trailers sell a setup to attach their trailers to QR bikes for example. At the very crudest level, a stack of 10mm or 12mm nuts will work, but a bike shop should have axle spacers that will work slightly less badly. You should keep the trailer hitch as close to the bike as possible, preferring more spacer on the outside of the hitch.

Since you don't own any relevant tools, I think designing or fabricating an adaptor would be a bad idea. You don't have the necessary skills. If nothing else, when it fails you will be left with two objects, each of which is easy to move, but moving both of them at the same time will be very difficult. How will you wheel the bike at the same time as dragging the trailer once the hitch breaks?

Too many comments, time to edit them in:

Expecting a racing bike to fit a child trailer is a bit like asking the same of your Ferrari. Don't buy a sports car then take it to the boat dealer and ask that a tow bar be fitted for the boat you want to buy. They have completely different purposes. At least with bikes you can buy a cheap second hand mountain bike to tow the kiddy trailer and you only have to spend $100-$200 (obviously you can spend more - but again, don't buy a $5000 racing MTB)

In chat someone pointed out that if you are new to cycling, towing a trailer is not ideal, and if you care about the contents it's a bad idea. Kids move round, even babies, and add to the number of things to need to concentrate on while riding... if you're not a confident rider you may be better off with a proper load/child carrying bike.

You'd be better off with a single part spacer than washers. They will work, just badly, they will slide on each other so there will be more slop. You're increasing the leverage, making it more likely you'll break the skewer. If you have the budget a proper cargo bike will work much better than any trailer, a "long john" style design is more likely to be available and they work really well for kids. Slightly more like a "normal bike" are the long-tail designs, but they're not great for babies (we have a pile of longtail "mummy bikes" locally, as you can carry two primary school children on one).

Also, buy at least two long skewers. They're fairly cheap, and very likely to break. Carry the spare, so when it breaks you can slot the replacement in and ride home. Assuming your bike hasn't been damaged, anyway.

A search like "carry baby" here will help you get ideas of what's possible. Several of the regulars in chat (link bottom left of every page) have kids of various ages and I expect they'd be willing to help. See also "touring with little kids" and search for "baby seat" (which mostly talks about 1 year olds and over, since that's when you can start to expect them to actually sit up in a seat and not break their necks)

Just because the trailer hitch is intended for an axle mount doesn't mean that's your only solution.

I'd consider a steel bracket that clamps around both the chain and seat stay, providing a flat area large enough to mount your black hitch permanently. Advantage is it leaves your dropout untouched.

You'd be leaving this on the bike all the time, and get a second black hitch thingy for the other bike. I have three towballs on my bikes, and only one trailer.

Does that make sense, or would you like a sketch ?

Here's my previous hitch, which clamped to the chainstay. The safety strap is out of the way, but you can see that the jaws have slid back and are within 10mm of falling clear off. I would not recommend one like this for anything, and certainly not with kids hanging off it! 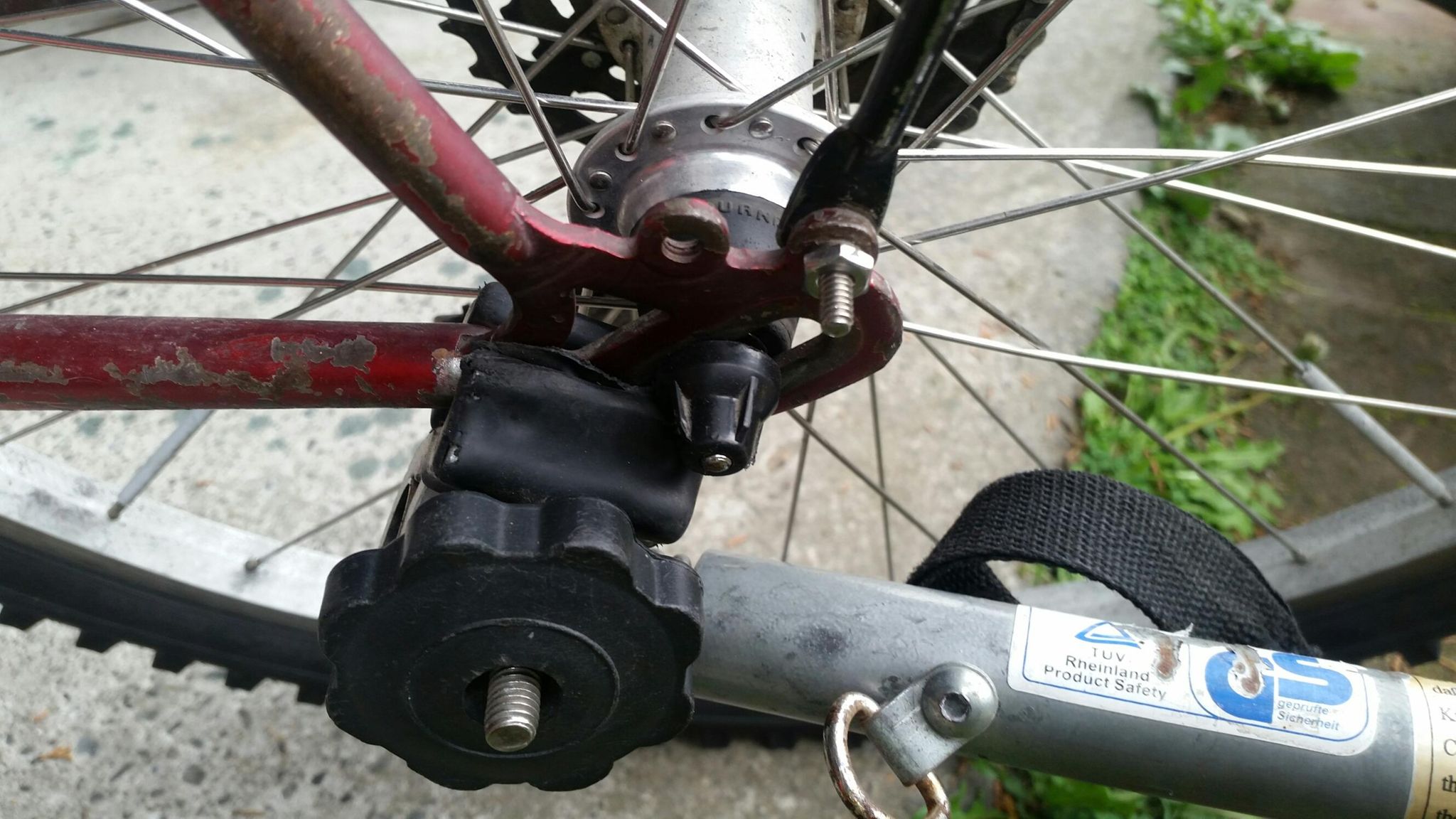 yes - fabbing up something like this would be ideal. Then you would bolt the black fitting permanently on. You should buy a second hitch fitting for the other bike too, for versatility. 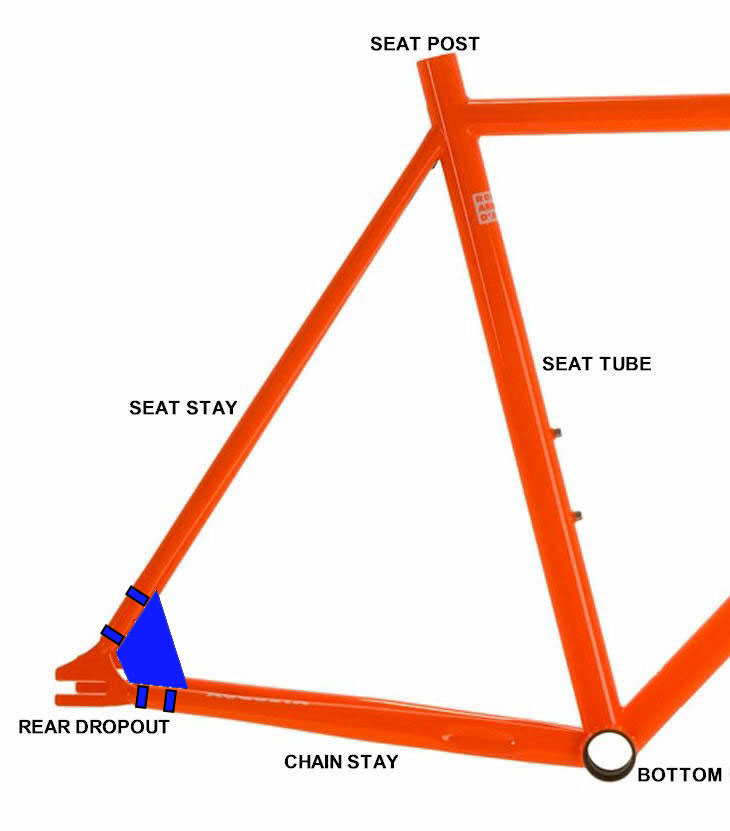 Use a threaded stud instead of a cap screw type bolt on your bike. Thread the stud into the rear hub assembly and then use a nut to tighten the rear frame member to the axle. Then run on one or two more nuts to offset the attach point on the stud to be raised up outside the indented frame coupler member. This will allow you to attach the standard trailer hitch point bracket without making a special bracket.

BTW. The trailer hitch point wants to be as close to the center of action on the rear bike wheel as possible. The offset bracket that you proposed would not lend itself to optimal operation of the trailer connection.

Not the answer you're looking for? Browse other questions tagged trailer quick-release skewer or ask your own question.