I'm a dad learning about BMX racing and I want to know what the difference is between a sprocket which the bike shop says as 90 odd clicks, then starts talking about points of engagement. Does the amount of clicks have anything to do with the points of engagement or they totally separate meanings ?

Sounds to me like they're talking about the pawls inside the freewheel body. The pawls click every time they bounce over a tooth.

Here's a freewheel opened to show two pawls and 20 teeth, which is two points of engagement and 20 clicks per wheel rotation.

At worst case, the pedals could move 20/360 of a full rotation (18 degrees) before the pawls drop, catch, and then the power goes through the wheel. The average will be 10/360 of a revolution before catching (that's 9 degrees of arc of the rear cog.) 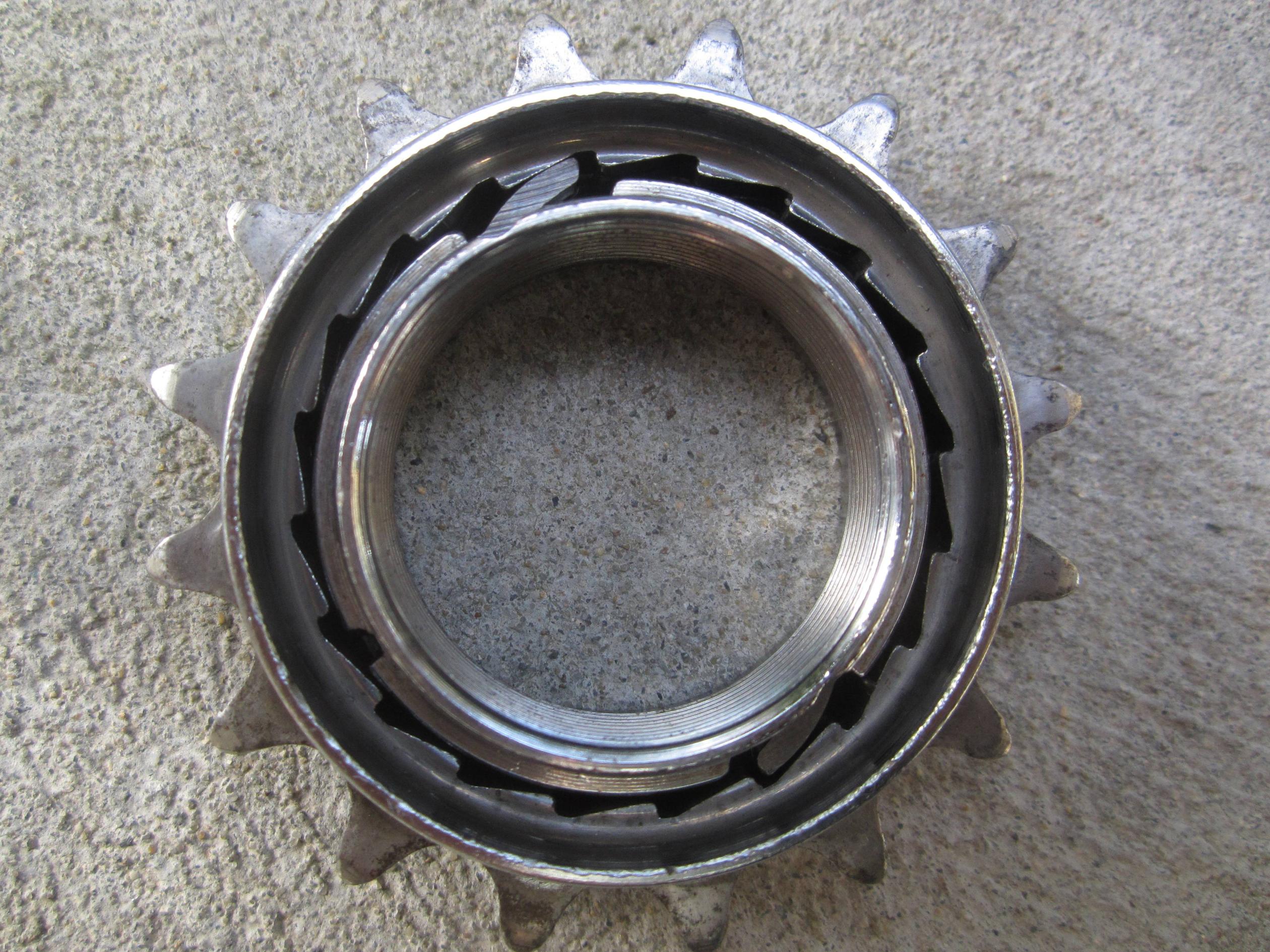 In theory if there were 90 clicks, and everything else was the same, power would be transmitted to wheel from chain in 2 degrees on average, or a worst case of 4 degrees.

What's the point? The more sooner the slack is taken up, the sooner the power comes. When the rider's brain says GO the muscles have to move, the mechanicals have to move, then the bike has to accelerate. All parts of this flow have slack or lag or tolerance or reaction time, that adds up and increases the overall delay.

So if someone is making a break, the extra lag between pushing hard on the pedal and getting moving may make a difference between catching the break or not. (that's road speak - not sure if BMX has anything similar. However brain says GO and power takes time to arrive, then that's not going to help)

then the gear ratio is 2.81 meaning the rear wheel will revolve 2.81 times for one full pedal revolution, and the bike will go forward 4.2 metres, and the wheel is doing 80 RPM.

Note: If both riders are pedaling or stopped at the start line, then all this is irrelevant, because the bike will be tensed up, and the pawls will be ready to go, so 0 degrees of slack lost.

Not the answer you're looking for? Browse other questions tagged racing bmx sprocket or ask your own question.

8
Bent front sprocket
3
Can't change into the largest sprocket on rear derailleur
2
Rear sprocket slips
0
Joshua X1 Rear Sprocket
4
Gates belt drive front sprocket replacement
3
Freewheel sprocket locking up
3
Maillard sprocket: is really this rare?
1
What is the top sprocket?
3
How can I not break my sprocket next time