Can anyone identify this Raleigh bike? 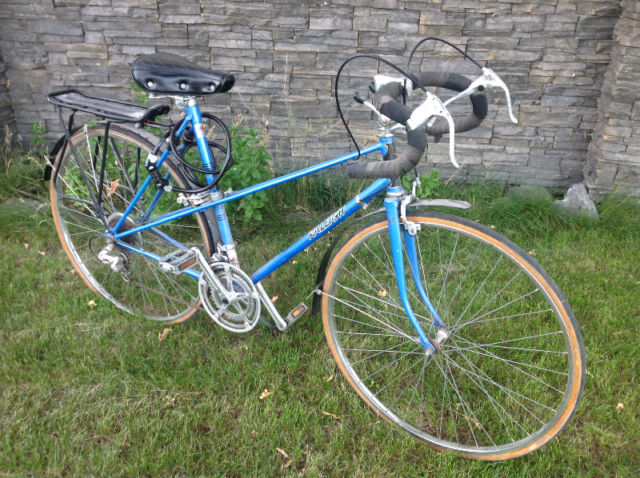 Answer Its a late 80s bike, maybe an early 90s. The frame is a mixte, so probably sold as a woman's bike. Almost certainly a steel frame.

The brake hoods have sissy bars, which were common in the 80s for those who didn't ride on the hoods and preferred to ride on the tops.

Shifter levers are up on the quill stem, so its more recent than downtube shifters.

The metal dork disk on the back wheel dates it to late 80s as well. Plastic was more common later.

Can't see a lot of the transmission, but it looks like a 2x5 or a 2x6, which means a freewheel not a freehub.

The mudguards / fenders are not original, and maybe the saddle is a replacement as well.

If you test-ride it, particularly check out the tyres before riding. Gumwalls like that could easily be 20 years old now, and haven't been commonly sold, so they're a minimum of a decade old.

DANGERS It might be the photo but the left hand handlebar looks odd. Almost looks like its a sharper curve than the right hand side, which makes me wonder about crash damage. Inspect it closely.

Valuation We don't do valuations here. You need to compare it to other similar bikes in your vicinity and see if its in-line with other local offerings. Something's value is determined by what one person will pay for it, which is related to scarcity. Don't just buy it because you like the colour.