I have hit an extremely non-cooperating drive side square tapered bottom bracket cup.

I used a 8x1mm threaded rod to secure the tool in the cup before using the double-wrench tip to have a two feet long leverage. Someone else held the bike so that I could go full force, but the notches gave up. The tool was so tightly inserted that the bottom face of the cup got scratched as well. Penetrating oil had been abundantly put in there before and gravity had two hours to make it do it's job.

The force was applied clockwise.

So, here I am, looking for ways to drill, grind, file, cut or destroy this thing.

I think the first thing to do would be to have a way to remove the spindle and bearings. Then, the cup could be cut or filed.

Thank you for any help!

I had a similar problem but it did not progress to such extremes. A shop gorilla installed a new BB on my bike and I couldn't get it off to save my life. What I eventually did was a variation of your mechanism. I had the parktool that includes the handle built into the wrench/adaptor. I leaned the bike against the wall, and had someone else hold it safely. Then I placed the tool into the cup's grooves and basically stomped semi-hard on the handle. It broke free and I was sure to use a ton of grease after that on all BB.

In your case you have stripped the notches. You are correct in that you need to either remove the axle, etc or you could try this.

Once you have done that, take a smallish chisel from Harbor Freight and place it as close to a tangent angle as possible INSIDE of the cup on the bottom bracket shell. The idea is that you will gently tap the cup out of the shell, millimeter by millimeter until it breaks free. It shouldn't take too much. Maybe 1 centimeter's worth of rotation.

Clean with a copper/bronze wire brush (harbor freight) and brake cleaner in a can (auto parts store). Spray the cleaner inside of the BB shell, ten use the copper and only the copper brush to scrub the threads parallel to their track. Take your time. You don't need this headache again.

Once cleaned with a rag and dry you have a choice to make. Either use anti-seize or marine grease by Lucas. I prefer the grease as it tends to decrease any creaking in older threads and it doesn't make a mess. The anti-seize is technically better but is impossibly messy. Your call. Be sure to spread your choice inside of the shell and all over the hub threads. Don't be bashful about this.

Yes, I have done this and it was a pain. My final piece of advise is to remove the fork and wheels from the bike is using the chisel method as they absorb the shock you want to transmit to the BB. Place the bike upwright and have it resting on the BB shell. That will maximize loosening power.

b) Take your tool, go to the local machine shop and ask them to remove it. You're looking at 35-50 bucks but they will get it out, and should clean the threads.

I have asked bike mechanics friends their thoughts on this issue and one of them who is also a welder came with this solution: since the cup is steel, weld a piece of metal on the cup, then use this piece as an anchorage to work with a torque bar as long as needed.

This would have required about two hours of work. I have submitted this to the owner of the bicycle and also gave him the option to put back everything as it was before. Having spent already quite some money on the bike recently, he decided to post-pone the job to the end of the summer or next spring.

I consider the solution he proposed to be feasible, but the answer to that will come later. Thank you all for your ideas!

I had something like this on an old folding bike. The owner said that he had it installed by a gorilla using loctite threadlocker.

So the fix was to use leverage, but to control it so the tool did not slip. We had the non-drive side off and removed the axle, and reinstalled the shell temporarily. There was some threadded rod through the BB, and we used a stack of big washers to spread the load. This held the BB tool (a park HCW-4). Then we used a pikey hammer to gently turn the cup.

Sounds like you have the cranks off but neither side cup. So your best option is to rig up something using the BB itself as the shaft that holds the tool in place. Some washers, or a short buttpipe/bushing might be all it takes.

As promised, here's the tool I made for taking off a cup that is stuck.

Here's the normal bottom cup tool with two flats on it. 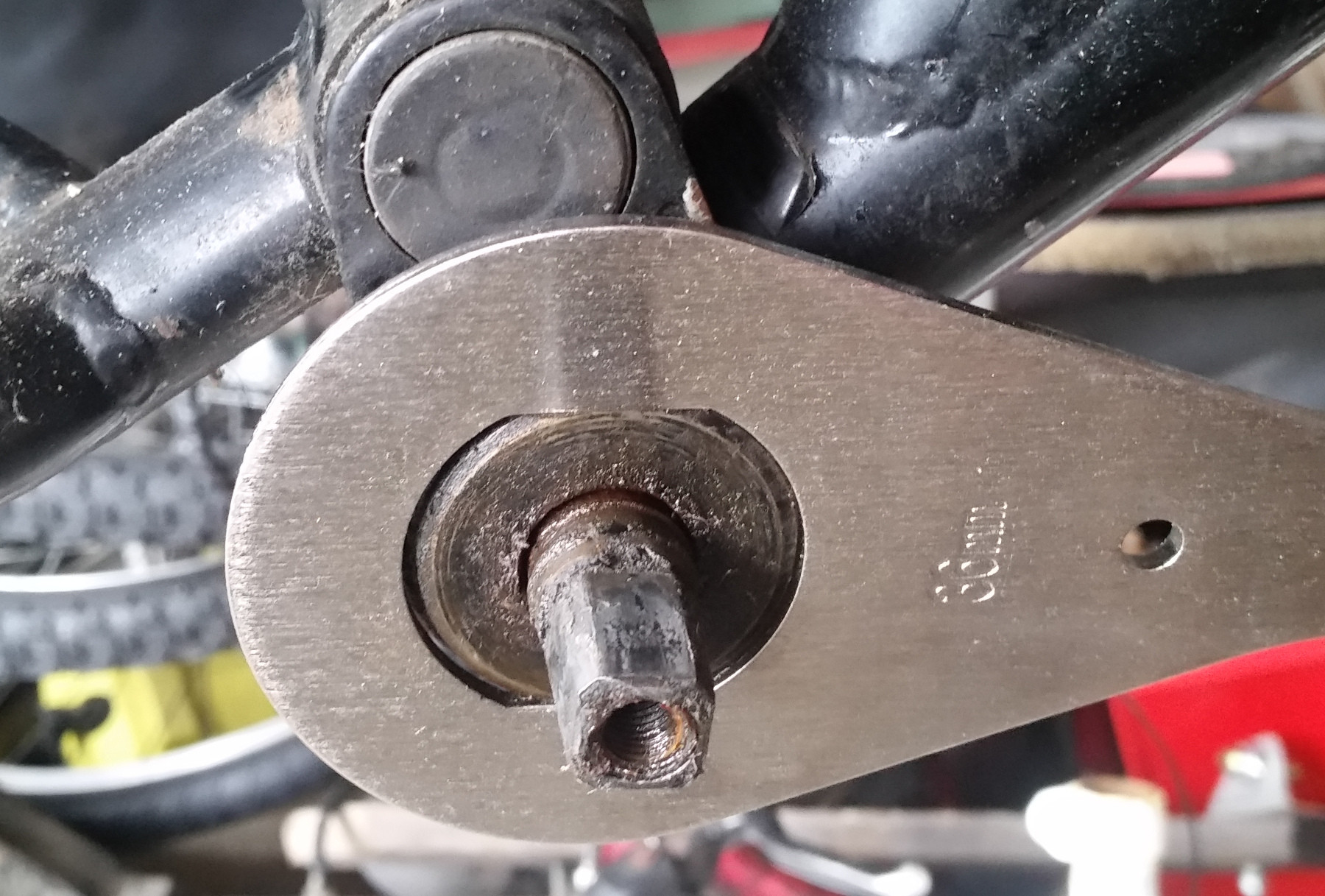 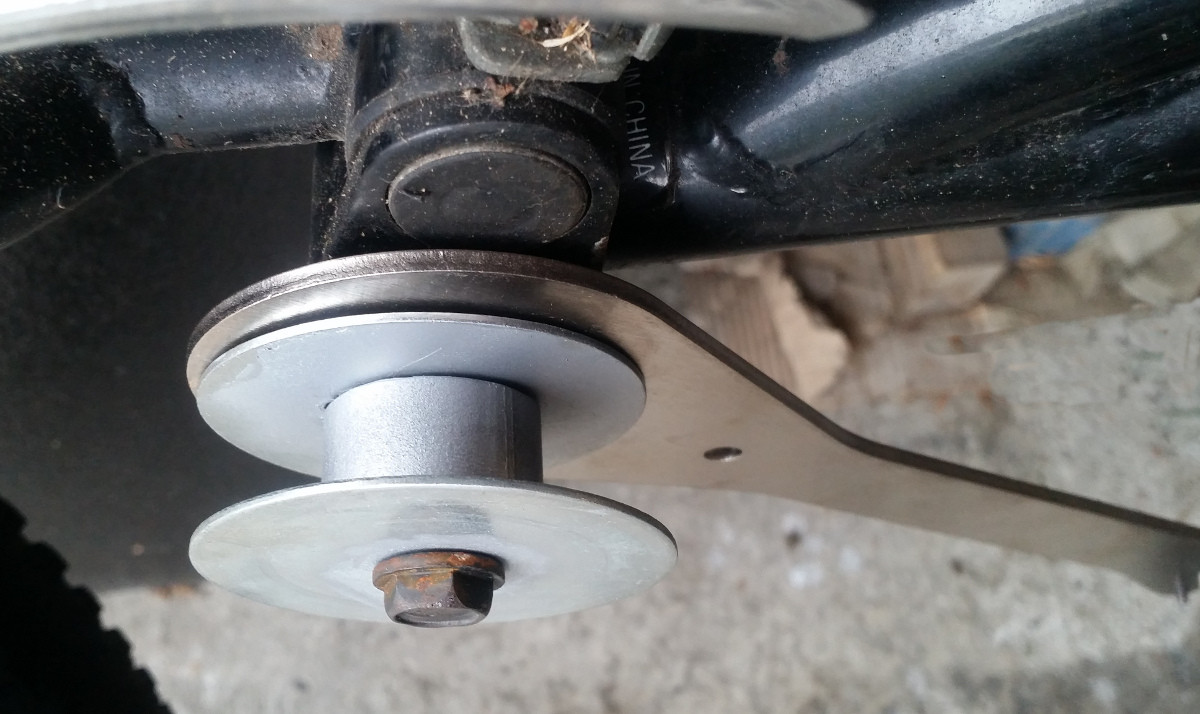 Photo of it without the middle tube in place: 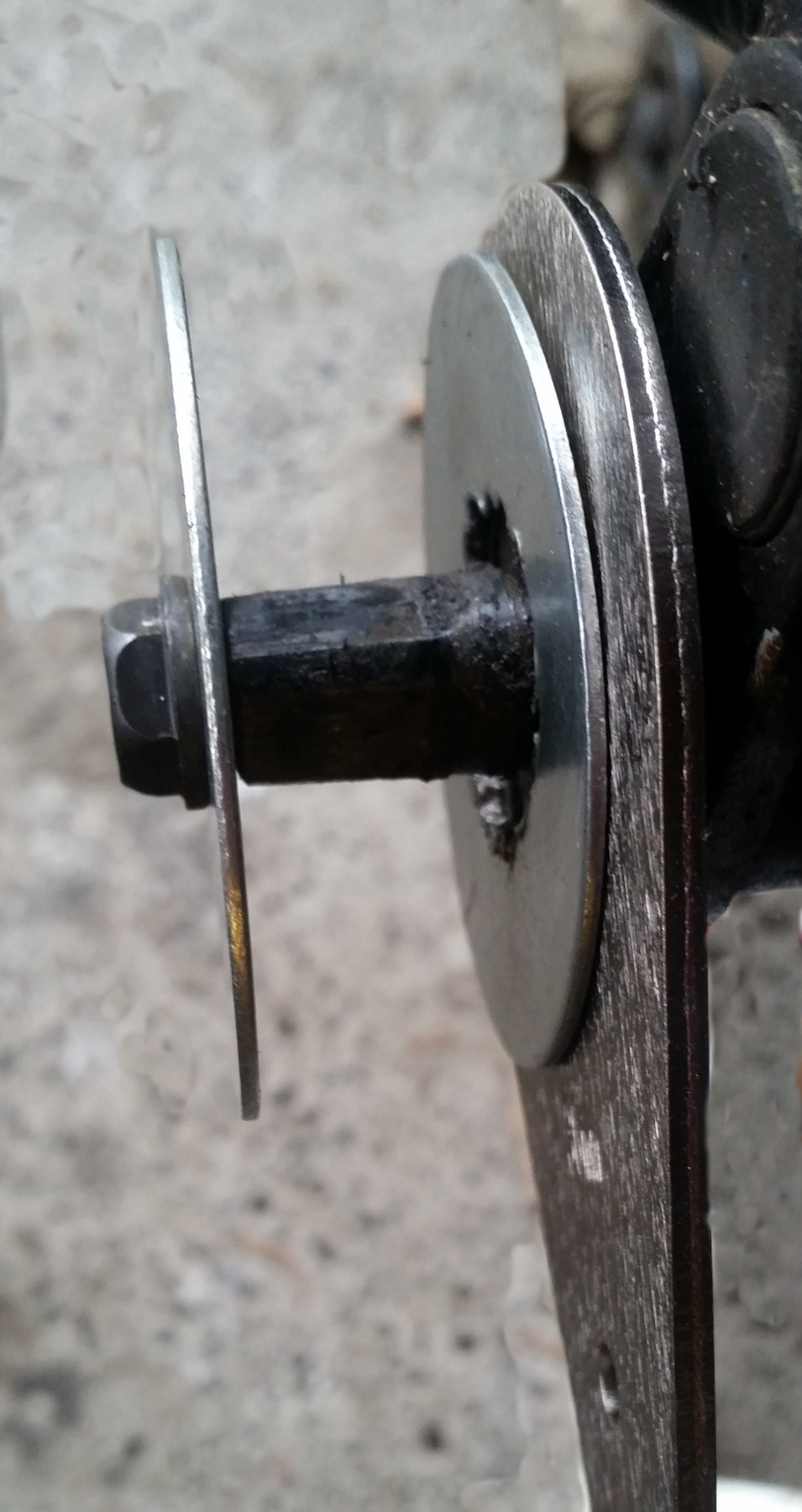 Making the two washers - started with large 2" washers from the junk drawer. One needed an 8mm hole in the middle for the crank bolt, and the other need a 26mm hole to clear the BB axle. Somewhat rough way to do it, but it works. 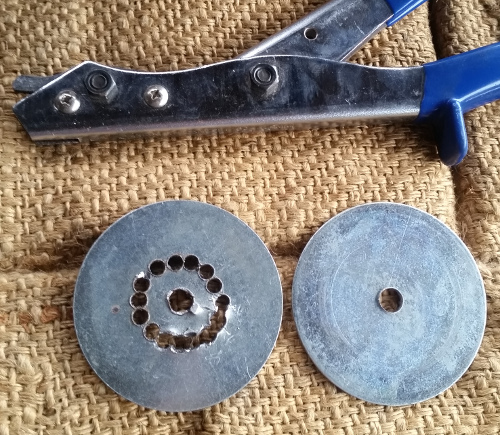 The purpose of this is to hold the correct too in place while you apply leverage. Also means your fingers are nowhere near the pinchy bits. When working alone you can now use hand leverage, and then a progressively increasing series of hammer taps to work the cup loose.

NOTE the drive side cup is left-hand threadded. So turn it the opposite way

If you're talking about the cup on the non-drive side, then its often a different fitting, with a lock ring. You can either do exactly as illustrated, but use a park HCW-11. Or you can use a pair of stiltsons or some sliding lock-jaw pliers on the locking ring part.