Aero Bars vs The Drops

On my road bike I am debating installing aero bars.

Will I notice a significant measurable improvement in speed using aero bars vs being in the drops?

I am looking for specific numbers here with resources, not just opinions.

The case I am really curious about is riding solo, on flat ground around 20 mph where there is no wind.

Yes, typically you will obtain an improvement in speed by adding clip-on aero bars to your bike.

How much extra speed is dependent on many variables though (mostly how it changes your aerodynamics) but a couple of km/h faster is certainly possible.

One of the several compromises of adding aero bars to a road bike versus having a dedicated time trial bike is that the clip-on bars are set up fairly high when clamped onto the tops of the road bike bars. They also take up space where you might wish to rest your hands at times and of course unlike a TT bike you need to move hand position to access gear shifters. It's not a big deal if the road is of a very consistent gradient, but will become a bit of a pain if the road is a little more variable.

Another factor to consider with such bars is how they affect your saddle position as sometimes it helps to bring the saddle forward a little when stretched out more on bar extensions.

Be careful with the clamps and be sure not to over tighten and damage the handlebars, but also don't have them too loose so that they slip when you are riding / go over bumps!

If you do try them then take some time to practice riding with them and stay safe!

Edit: Since the OP wants some specifics, I'll provide an example.

I did some analysis of my own TT performance over a course I raced twice in 2009. It turns out the wind and air density were very similar on both days which meant a direct comparison was reasonably possible. I use various analysis methods to account for variations in environmental conditions, power output and pacing (some of which are derivatives of original work of R. Chung).

The first race I rode on my standard road race bike, the second on a borrowed TT bike and using the same clothing and helmet for each ride. I accounted for differences in pacing and power (only 1W difference) and calculated the difference in coefficient of drag area (CdA) which is the primary measure of an object's "aeroness". My CdA reduced from 0.334m^2 on the road bike to 0.286m^2 on the borrowed TT bike, a 14% reduction.

Now a 14% reduction in CdA does not mean a 14% improvement in speed. In this case it meant an improvement of 3% in speed or a little over 1km/h. Keep in mind that this wasn't a totally flat course, so on flat ground that would equate to a speed gain of ~1.9km/h. Had I simply added TT bars to my road bike, the speed gains on flat road would have been less.

Here is the link detailing the impromptu assessment and data: http://alex-cycle.blogspot.com.au/2009/04/new-skool.html

Now these things are individual, so YMMV, and what sort of speed gain is possible for anyone depends a lot on the aero characteristics of the starting position, the ending position and what if any power change is experienced when riding with the TT bars (often riders experience a loss of power when riding in a more aggressively tucked or stretched out position).

Here's some more sample data, this time showing the difference in CdA for four continental professional riders between their road bike (hands in the drops) and their TT bike. Again it's not clip on aero bars, however it's a good example of the variance in aero improvement between riders when position changes from road position to TT position: 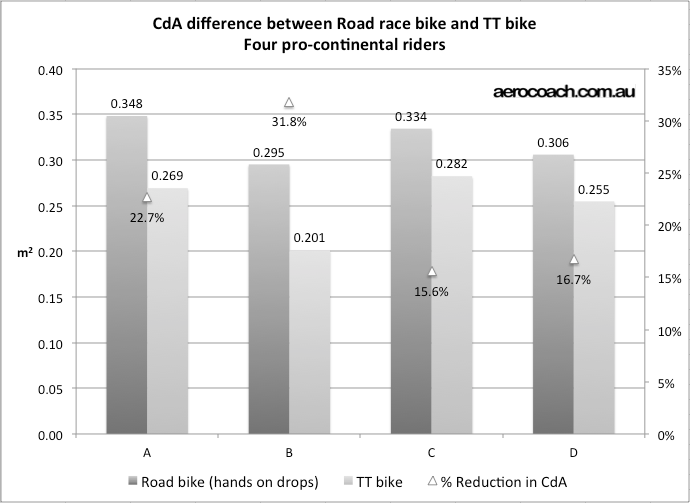 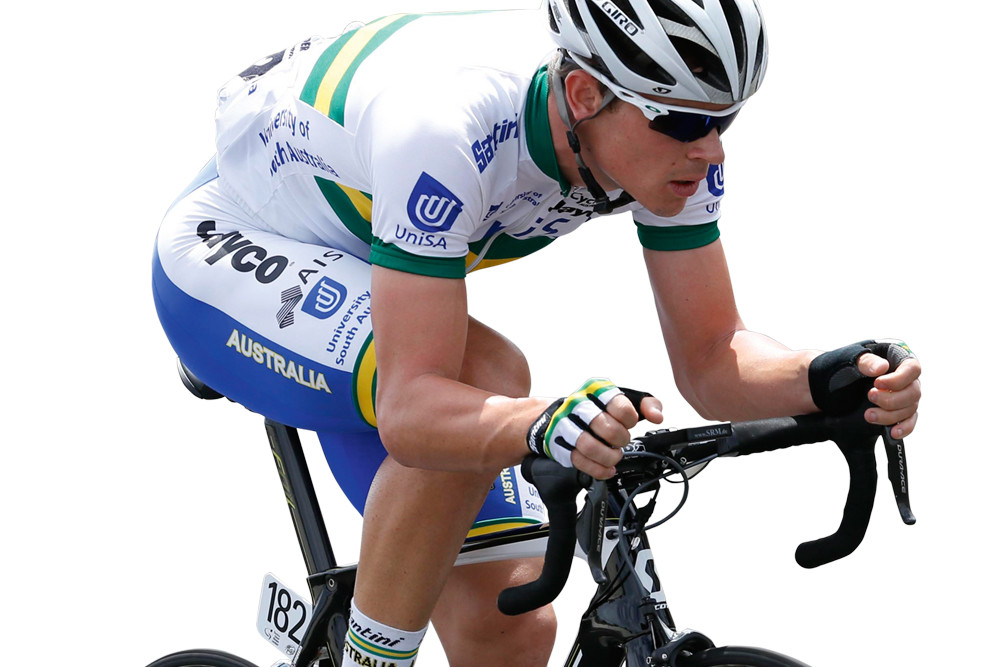 This position shields your forearms from the wind. Surprisingly, it is actually more aero than riding in the drops. This article by road.cc discusses an academic article comparing the regular hoods position, the drops, aero hoods, and short reach aero bars. This is the same rider on the same bike. I'm unable to access the article, but drawing from the text, this is the power required by the rider to maintain 28 mph (45 km/h) in a wind tunnel, at 0 degrees yaw:

The test discussed above shows a bit over 5% reduction in required power when going from standard drop position to clip on aero bars, or a bit over 4% reduction from drops to aero hoods. I have no insight into how drag changes as wind angle changes. The exact power reduction obviously depends on your own speed, and on the wind angle. At lower speeds, I have to imagine the percent reduction in drag is going to be less.

In any case, versus the standard upright position on the hoods, aero bars are a significant reduction in drag, and they still reduce drag relative to the drops. Roadies who can't or don't want to use aero bars may want to be aware of the aero hoods position, because it comes very close to clip on aero bars in drag. This does strain your triceps a bit, so it isn't typically used over very long distances. Naturally, one could train for this position specifically if one were interested.

Never mind just drag: in solo rides, aero bars do offer an additional hand position. This can reduce strain on your neck, shoulders, and arms in long distance riding, as articulated in this Cycling About article on bikepacking.

The following paragraphs don't apply to the OP's use case, but there is something worth discussing about aero bars in groups. You lack easy access to your brakes and your steering control is reduced when on aerobars. This was alluded to in the other answer. In a paceline, you may have to brake or maneuver on short notice. Thus, aero bars are outright banned in road races.

However, many longer riding events, like gravel races, audaxes, or road gran fondos or century rides don't explicitly ban aero bars. Because they reduce drag substantially and because they offer an additional riding position, some cyclists do use them. Anyone considering it should exercise caution and use some common sense. In particular, if you are in a paceline, you should stay out of your aero bars. Wait until you are riding on your own. Be aware that your control is reduced. Definitely don't exceed your skill level, especially on gravel. The reactions to bringing aero bars to a club road ride might vary, but riders who choose to bring them to a club ride should use the same precautions. (Note that Mat Stephens, cited above, does appear to use his aero bars in the pack in gravel events, but he more skilled and stronger than almost all readers here.)

Geoff Kabush is vehemently against aero bars in gravel rides due to safety issues, and he thinks they should be banned outright. The lead groups often are riding fast and in close proximity, and obviously they are mostly on loose terrain. A counterpoint by Mat Stephens, another competitive gravel rider, is available here. He essentially says that people need to get over it (but note that he has outright won a major gravel race, and he presumably has good bike handling skills).

See Chris H's comment below on aero bars being widely accepted in audax rides, which tend to be very long, multiple day rides. This particular road Gran Fondo strongly discourages aero bars but does not ban them, but these tend to be single day rides. Again, some organized road rides might officially ban them. In group rides organized by clubs, almost all riders will avoid aero bars, but they may not have specific rules. However, the ride leader might exercise their discretion to ask you to leave. In a group situation, remember that your actions affect the people riding close to you. Because of group cycling dynamics, this can include people who did not make a conscious choice to ride with you!

On a personal note, if I were leading a group ride, I would explicitly ask you not to use aero bars in the group, including if you were at the front of the paceline. I have a feeling some ride leaders might ask you to leave the group, or not to show up with aero bars next time, or to stay at the back of the line. Some groups may be more accepting, but some might be less so. This is not a common situation on the group road rides I have been on. Accepted practices may differ by discipline as well, e.g. I suspect triathletes who train together would be more accepting, but I also imagine they might not draft each other very closely. I have not found that I absolutely require an additional hand position on century rides. I have thought about using aero bars on my gravel bike, but I am not yet comfortable using them off road, and I am not always going solo in gravel events.

Not the answer you're looking for? Browse other questions tagged handlebars aerodynamics or ask your own question.

6
What is the average CdA to Weight relationship of a professional Road cyclist?

1
Advice on aero wheels
12
What are the disadvantages of wearing an aero helmet?
9
How is the width of drop bars measured?
4
Why are aero bars usually disallowed in gran fondos?
9
Reversing Drop Bars
0
Where does aero wheels noise come from?
3
What is the best aero position in a mountain bike?
21
What are the benefits of drop bars?
2
Aero bike considerations for purchase
7
Aero bars are a pain in the neck - are there strengthening exercises?