How should I gear a 12" wheel on an adult bike?

Background: A couple years back I built a chopper with a 26" front wheel and a 12" rear wheel. It was a lot of fun, but I had to pedal like mad to get anywhere. Unfortunately I could not find a rear cog small enough or a front cog large enough to get me somewhere useable on long rides and ultimately had to increase the wheel size to 16". The size increase worked out great, but I want to try to build a new chopper with a 12" (if not 8").

Are there cogs small/large enough out there to make this work?

My other thought was to weld a bottom bracket shell to my seat post with a multi-speed chain ring and chain one sprocket to the front and the other to the rear. Would this work? If it would and this seems like the right way to go, what sprocket would need to be connected to what sprocket?

Have you considered an intermediate jackshaft with a two-stage gear?

Easiest thing would be to salvage a bottom bracket and a triple chainring, and weld it somewhere between the normal pedals and the rear wheel. This would give you:

So my maths is rusty but that should be the same as a 81.3 tooth chainring for the purposes of gearing calculators.

The high revolution rate on the rear chain and cassette will make it wear faster - you might be looking at a new one in as little as 1000 miles. 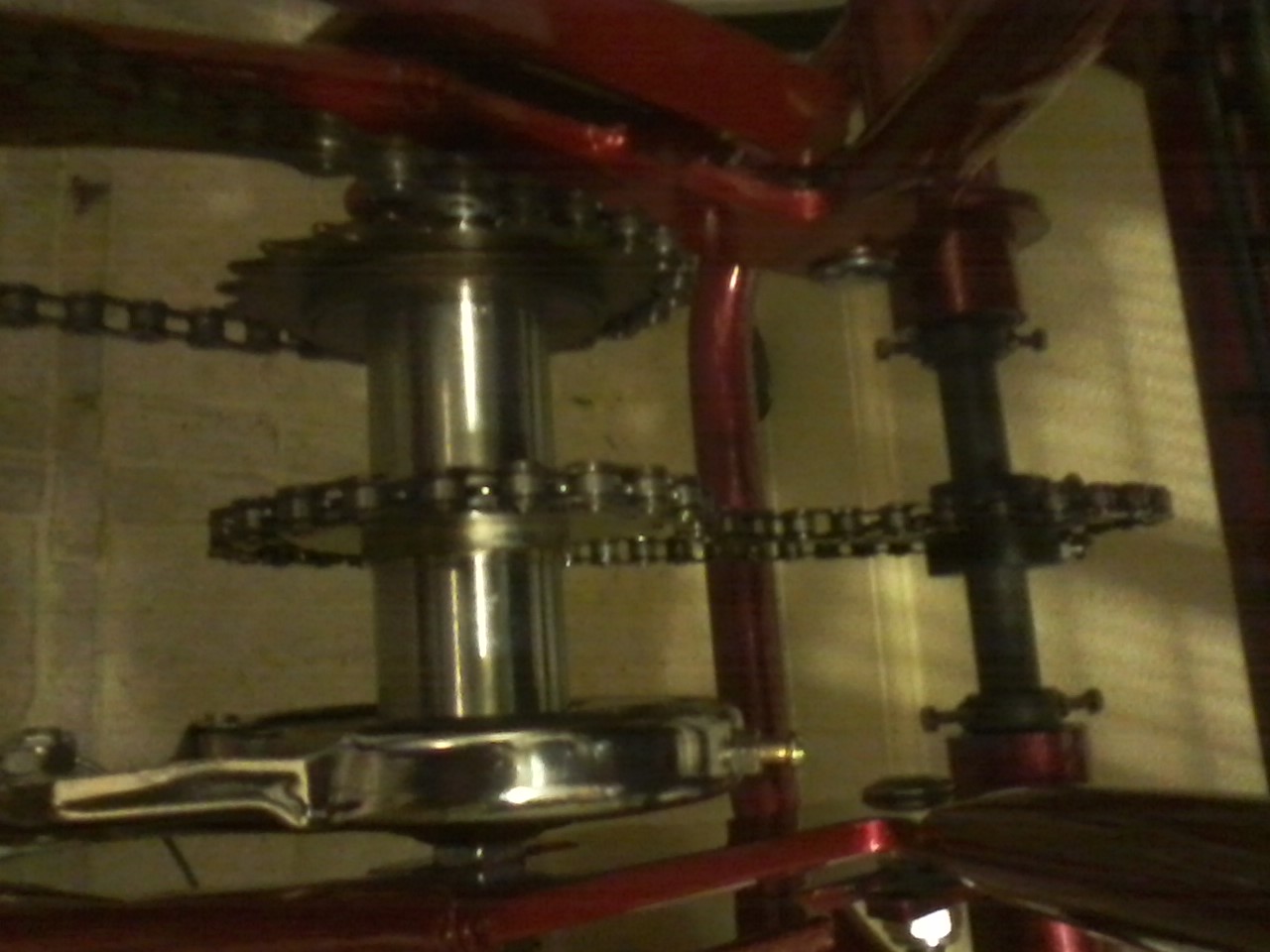 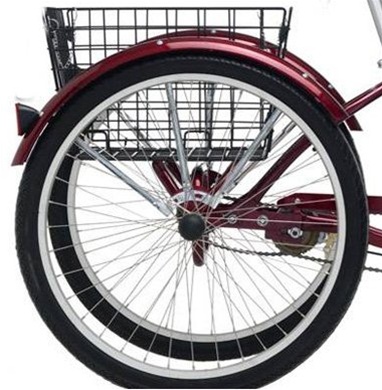 Another view of a trike 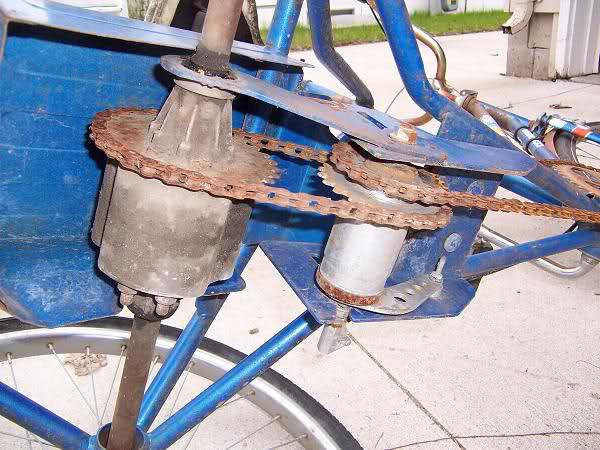 If you were really good, you could have the primary and secondary chains, and use a single loop of chain as a tertiary chain between two identical but opposed cassettes, and rig two derailers so that the tertiary chain moved up-one and down-the-other cassette. This could be a 5 speed chopper with a T shifter !

Using an 8 or 9 tooth BMX cassette hub will get you into the normal useful range for singlespeed gearing pretty easily with a normal large road ring. 53-9 on a 12" gets you about 70 gear-inches for example, which is a common choice for fixed/singlespeed road bikes. Most present-day freestyle BMX rear hubs would work fine. (Most are 9t, some are 8 - 8s wear out fast and are considered going too far by many.)

Using a 56t tri ring and a normal 12t cassette cog gets you into around 56 gear inches, which would probably be fine for a chopper. 56t rings, while not exactly common, are easy to get. Origin8 makes a 56x130. If this gearing worked for you it would probably be a cheaper route.

Since you mention going on longer rides with it, the good answer may just be to run it with the Shimano Capreo group and a 56t ring, giving you the benefits of a derailer drivetrain. I'm pretty sure the Capreo derailer should still clear the ground on a 12", but you might want to corroborate that somehow before doing it. It may not on an 8".

Not the answer you're looking for? Browse other questions tagged gears build or ask your own question.

1
Adjusting gear ratio
1
chain jumping when puilling away in a higher gear
3
Chain coming off with internal hub gear bike - why?
2
Chain is reluctant to shift into hardest gear on rear cassette
4
Half speed internal hub gear?
0
Triple chainring + nonstandard sloped cogset. Can this work?
1
Can a gear change snap my chain?
1
Why isn't the chain on the rear gear in biggest cog for lowest gear